Attention, orc bashing adventure lovers! More than 17 years after its original release on PC, the seminal classic RPG Neverwinter Nights has finally made its way across to consoles, and it’s gotten a fresh coat of paint in the process. Neverwinter Nights: Enhanced Edition is the latest in a series of Infinity Engine RPG remasters to come out of Canadian developer Beamdog, which has also put its name to the enhanced editions of Baldur’s Gate and Baldur’s Gate II, Icewind Dale and Planescape: Torment over the past decade, and it’s a damn solid effort.

If you missed out on Neverwinter Nights on PC almost two decades ago, suffice it to say that there’s some real gaming goodness on offer here. Neverwinter Nights: Enhanced Edition does take a while to get the hang of, but it’s bursting at the seams with content (literally hundreds of hours of it), and it delivers everything a Dungeons and Dragons grognard loves: it’s got a bunch of character classes to choose from; its adventures are open-ended with different realms of narrative to dive into and plenty of plot-defining choices to make; its bestiary of monsters and foes is huge; and there’s more than enough room for tactical variety when encountering different threats.

Bursting at the seams 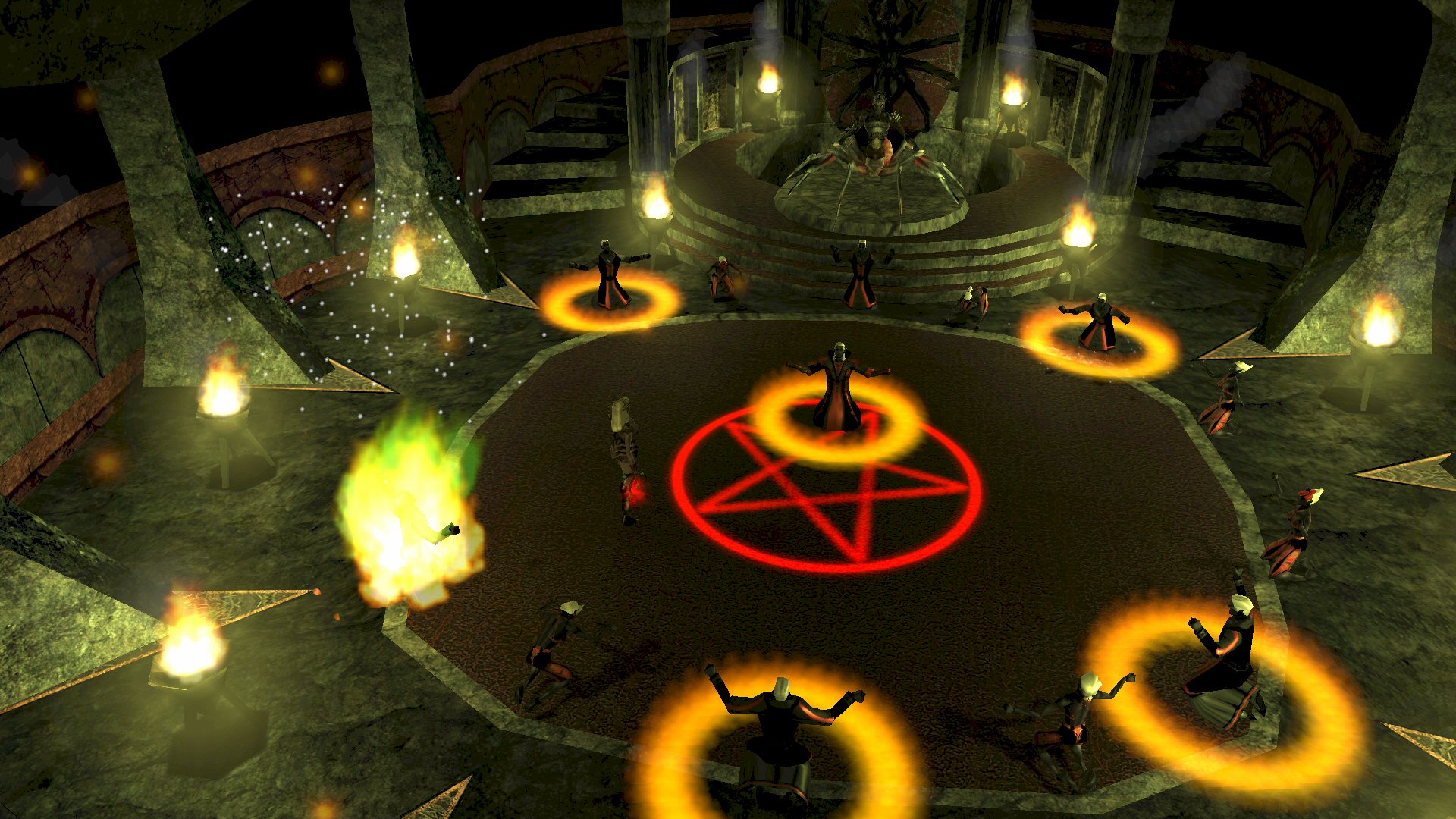 Neverwinter Nights: Enhanced Edition has so much detail on offer that it can be a tad overwhelming at first — the original game did ship with a 224-page instruction manual, and needed it! You don’t get such a lengthy tome with the Enhanced Edition (in fact, there’s nothing printed at all); there is a detailed, excellent tutorial to run through as you get started with the game, but some players — especially those who’ve never played a game of this type — might find some important details lacking.

Thankfully, the community has stepped up to the plate and there is so much information available online that a quick Google search will deliver any information you need about class builds, game rules, items, quests and anything else you might need. Just be prepared: Neverwinter Nights is a super-detailed real-time RPG with a plethora of customisable controls and a three-dimensional camera that you can adjust on the fly to suit your perspective; it’s definitely a lot to take in.

If you are new to the Neverwinter Nights world, then the original tale is best to begin with. The core game is an excellent starting point, as the initial adventure sees you defending the besieged city of Neverwinter from the nefarious meddling of mage led cult. The action is then broken into major chapters, as you step and fetch your way through the core quests and begin to unravel the story.

There is plenty of time to meander, too, with a smorgasbord of side quests to tempt those keen on extra treasure and levelling up by gaining battle and adventuring experience. You can even “multi class”, exploring different career paths as you change your skills to suit your fancy. The game gives you a very detailed map of all of the large regions you’ll get to explore, and completionists will quickly find that there are a ton of different nooks and crannies that they’ll need to traverse if they want to finish every quest. 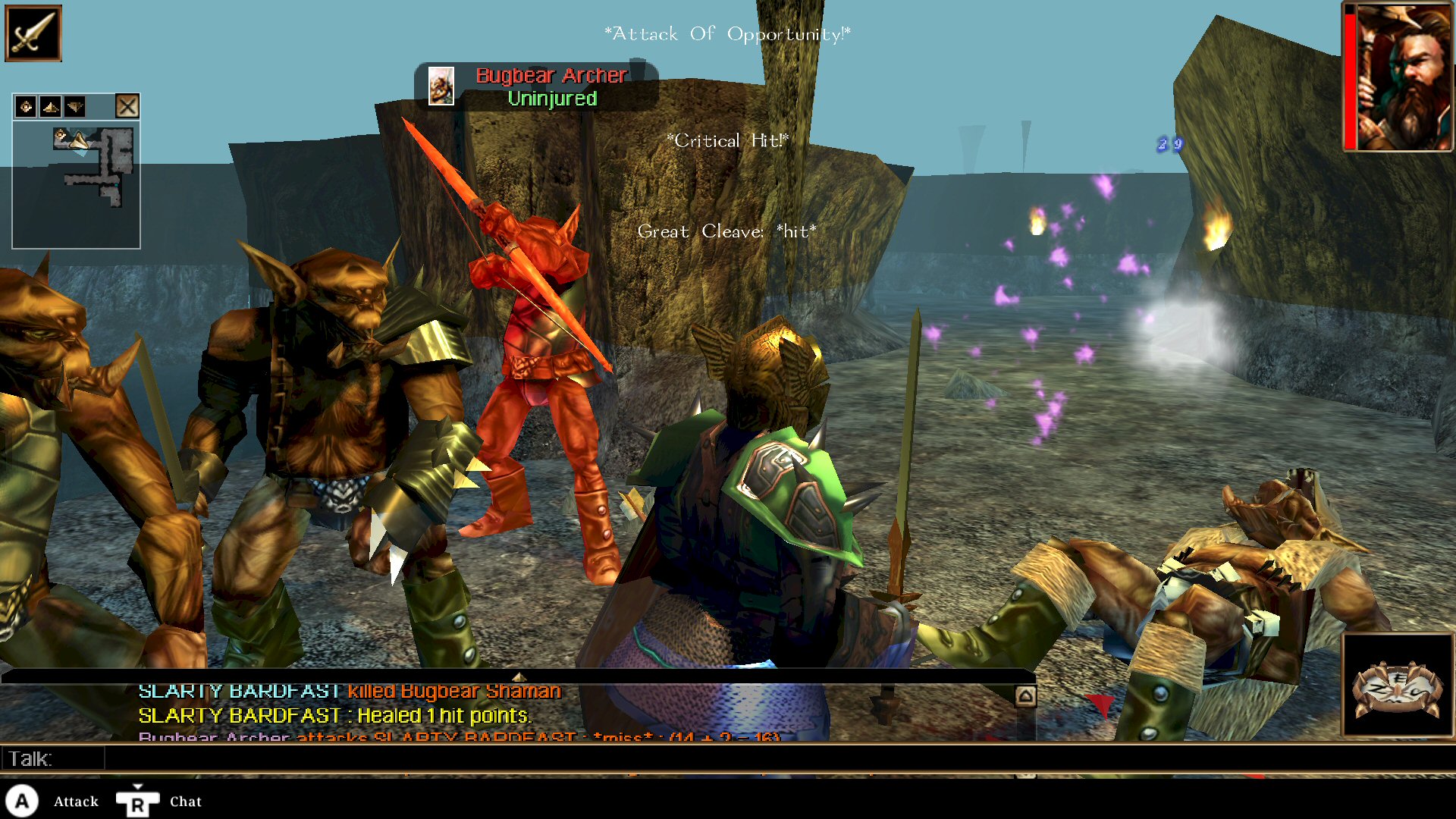 I’ve spent a lot of time with the PC version of the game over the past 17 years, and it’s safe to say that the move to consoles — particularly the Xbox One on which I played the Enhanced Edition — has been largely successful. There are some targeting issues when it comes to engaged in combat, though, namely at times when you’ll inadvertently open a door or a chest when you’re trying to target an opponent. Although this is somewhat annoying, it’s also very easily explained: the console iteration attempts to make up for the absence of a mouse by guessing what you’re targeting using your camera view as a guide. Occasionally, it guesses wrong. It’s a minor annoyance, but it’s easy enough to re-target your focus and move on.

I did also note some clipping from time to time, and there were a couple of instances where my character would end up launching well above the field of play due to an amusing graphical bug. Flying that way is not a cool character skill!

Those admittedly minor issues aside, the game is very obviously just a rework of what BioWare initially put out near enough to 18 years ago. Back then, RPGs were only just transitioning to 3D models, so the graphics were pretty snazzy, but now, even though Beamdog has done some work on the texture and details, the original character models remain very basic and some will find this off-putting. Having enjoyed the venerable PC release as recently as two months ago, though, I can say that it’s quite possible to see past the lack of razzle dazzle and appreciate the substance that Neverwinter Nights has to offer.

It’s also important to note that this Enhanced Edition is best played using a fairly distant camera angle. Although you can zoom in quite close, it’s not necessary at all, and the wonky graphics are nowhere near as annoying as they might have been if it was.

The replay value is strong with this one 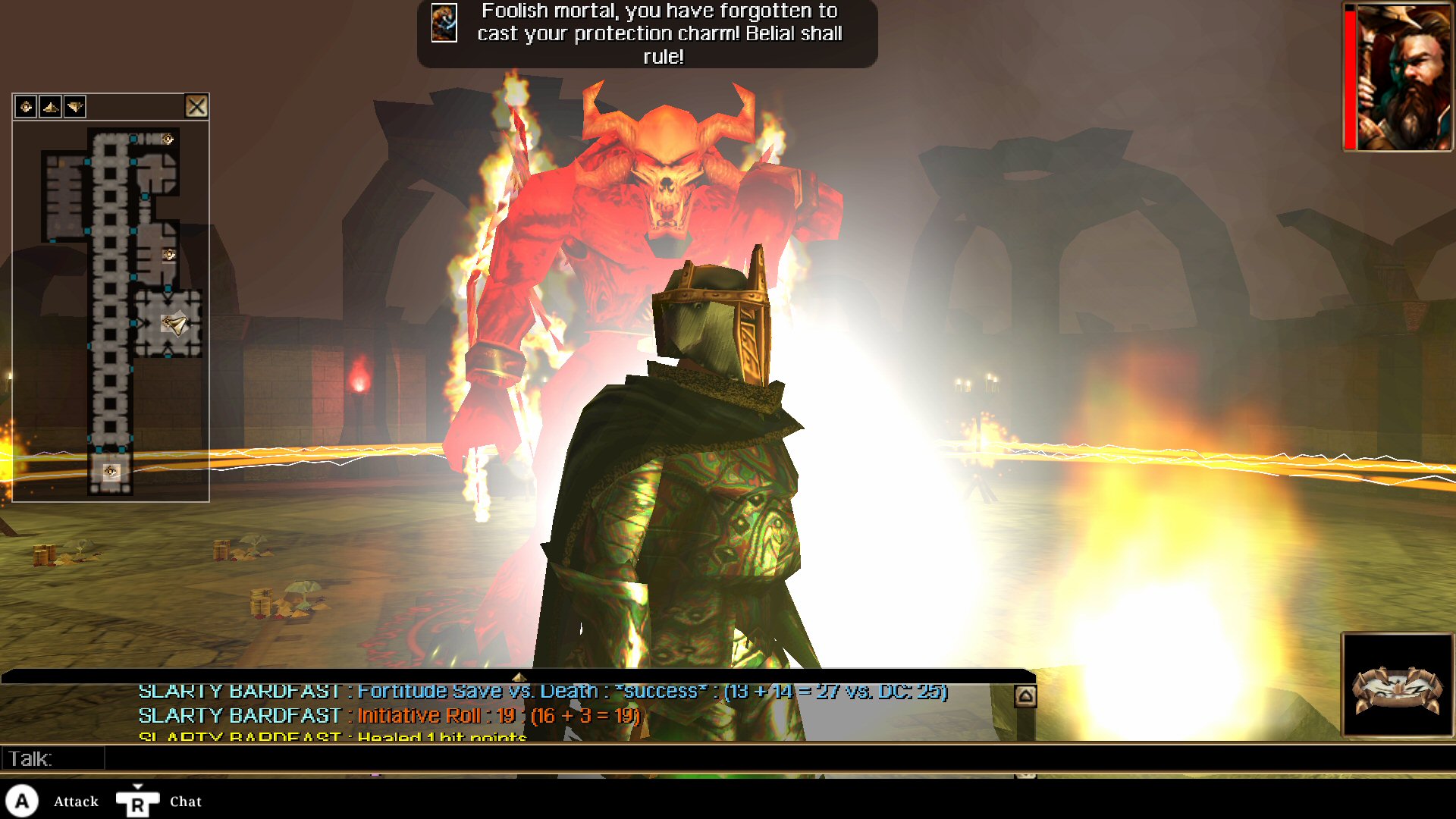 Thankfully, even though the eye candy might be lacking, you do get value for your money as far as content is concerned. Neverwinter Nights: Enhanced Edition features a lot of depth and the compendium combines all of the official game content with some great user-developed extras. Included alongside the original adventure are the Shadows of Undrentide and Hordes of the Underdark campaigns, as well as other content like Kingmaker, Witches Wake and a whole lot more.

Provided you get into the game, there are so many spells, feats and skills to master and such a wealth of character development arcs to be enjoyed that the replay value is massive — that’s Neverwinter Nights’ strong suit; you can play through the adventures using such a wide variety of character builds that no two sorties feel entirely the same. Aside from the core classes (bard, cleric, fighter, monk, wizard, etc.), there are also some really cool “prestige classes” that let you play the game as a shapeshifter, undead wizard or half-dragon, just to name a few. These further class options add enormously to the experience.

It is advisable to begin with a more simple fighter-based character and simply belt the living daylights out of everyone you come across though. The spellcasters are definitely more tactically engaging and can be more fun too, but they are also harder to play until you have mastered the minutiae of the interface, which will take some doing. Setting up “hotkey” wheel slots for the spells you’d like to call up more quickly is at first more involved than the PC version of the game, and it’s nowhere near as easy. 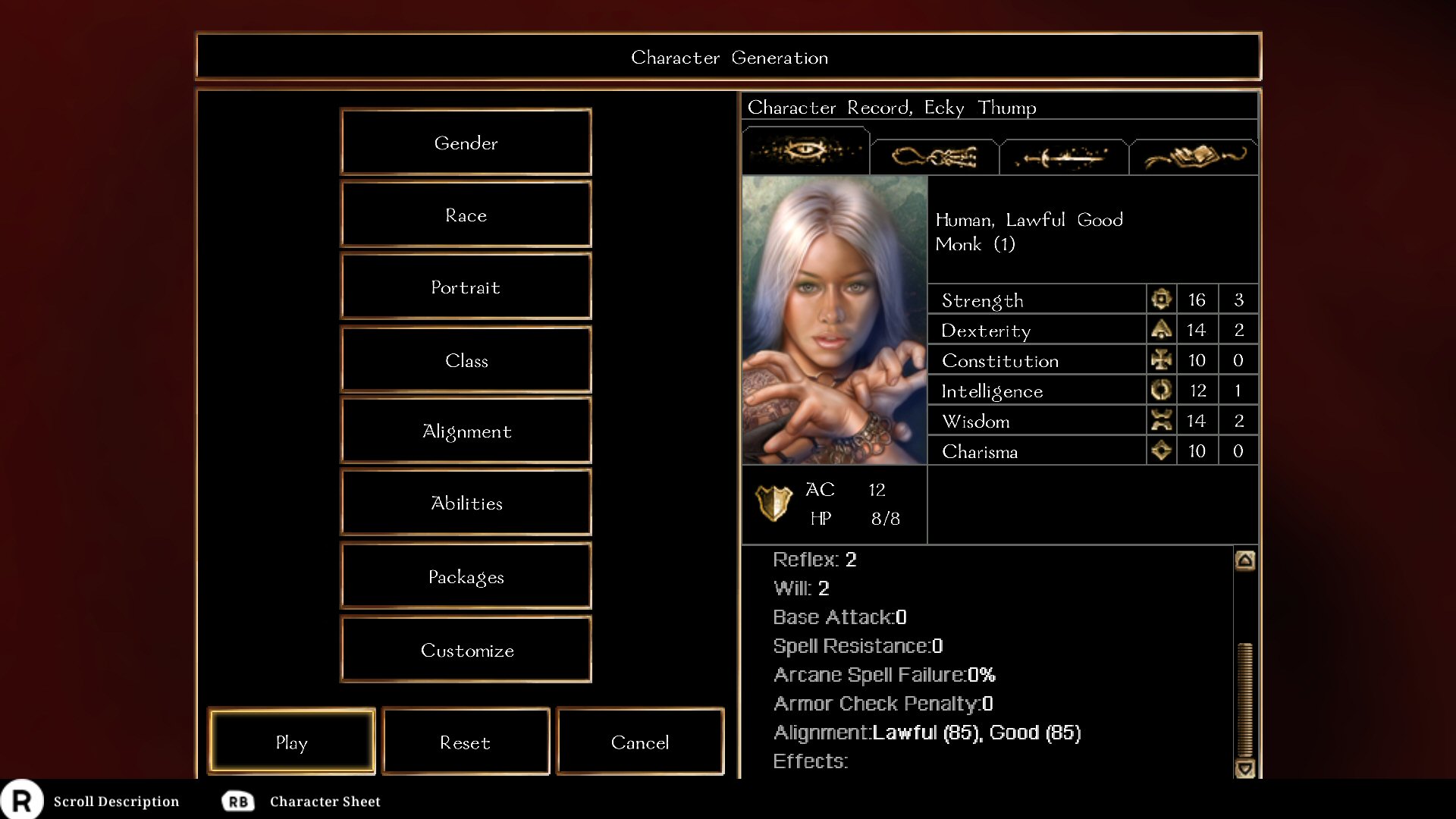 Even the simpler task of managing your various hotkey weapon loadouts, potion consumption options and special skills to easily use takes time to master. Using the quick slot wheel the game provides for even the basics is a challenge at first — that challenge is well worth it, though, because there is a lot of game to be enjoyed once you conquer it.

Given that all of the content and the variety of classes aren’t really new, it might be easy to wonder why you’d play an 18-year-old game on your console now, and that’s a fair question: if you can still access the game on your PC, the console versions add very little to the experience, but I still enjoyed the console experience simply because it was easier to do so once I got a feel for how the interface worked with a controller.

Additionally, the audio — which was always one of Neverwinter Nights’ strong suits — is a whole lot better on console (especially through my home stereo). The clashes of weapons, the moody music and the many, many spoken monologues help bring the game to life really well, and that’s just enhanced (if you’ll excuse the pun) by the 3D surround sound available to me.

Neverwinter Nights: Enhanced Edition also has a multiplayer menu tab, which I assume will let players use the Aurora toolset to make their own games and will have options aplenty for group adventures, just like on the original version. Unfortunately, I wasn’t able to get that working on the full retail edition, but the original version’s toolset was quite powerful and offered some wonderful online multiplayer questing experiences, so I’m hoping to get that running eventually and be able to provide a little more information on that. For now, though, I’m more than happy to enjoy the single-player experience and everything that has to offer.

Modern RPG fans might find Neverwinter Nights’ sometimes-glacial pace and extreme attention to detail a little jarring; that and a few minor technical issues aside, though, Neverwinter Nights: Enhanced Edition has aged very well and patient fantasy RPG fans will find plenty of fun to be had.