Neversong (formerly Once Upon A Coma) is a macabre side scrolling adventure from the award-winning Thomas Brush (Atmos Games) and Serenity Forge. It’s a truly unique dive into the darkness of youth, love and friendship that involves engaging symbolism, a haunting soundtrack and utterly delightful character design.

Neversong’s history is quite fascinating: it’s actually a “very, very soft reboot” of Thomas Brush’s first commercial release, a Flash game called Coma that he released on Newgrounds.com in 2010. Brush spent the next five years working on his second release, the Kickstarter-funded Pinstripe, before turning his attention back to his debut in earnest. Brush had already been working with Serenity Forge on a HD Coma remake, but he decided to evolve the idea into a heavily-inspired sequel; the game eclipsed its $28,000 Kickstarter goal, and now that it’s in our hands it has  exceeded all expectations.

Neversong casts you in the role of young Peet, who wakes up from a coma to find that his girlfriend has gone missing somewhere in the town of Red Wind and sets off with his pet bird to look for her. Peet’s journey takes you into a world of demonic adults and orphaned children — each a uniquely neurotic gem — as the terrifying Mr. Smile stalks you across six artistically deranged locations filled with delightful puzzles and mobs of enemies. You start off smashing through obstacles and enemies alike with your trusty baseball bat, and earn more abilities as rewards for taking down horrific bosses. It’s a fantastic horror experience. 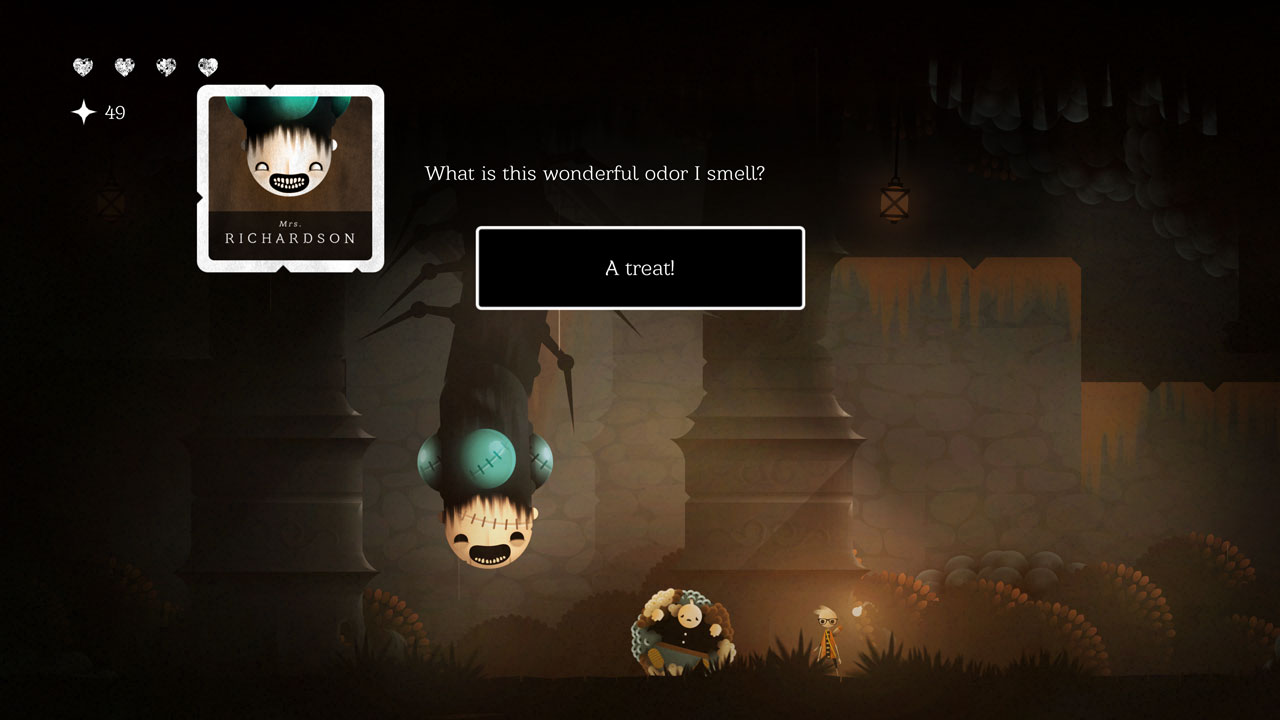 The gameplay on offer is a fluid mix of combat and puzzles that utilises bouncy physics and telegraphed attack patterns to keep simple encounters feeling fresh. Bosses provide unique challenges that build upon level design and intuition, so the difficulty curve is almost invisible. Simply hacking and slashing at mob enemies turns to swinging and flying around the screen, and Neversong rewards exploration with little treasures called “Coma Cards” tucked away around the game world, providing nuggets of lore and cosmetic changes to your character.

Each environment’s soundtrack is genuinely some of the best piano-produced ambiance I have ever experienced, even from AAA titles, and Neversong’s creative elements become even more impressive when you consider that developer Thomas Brush produced almost all of them on his own; not only the music, but the art and story design as well. On top of that, the voice acting is phenomenal — Neversong is not particularly rich in dialogue, but everything that’s said is said with a purpose and conviction that suits the characters perfectly.

Neversong is relatively short and simple, taking only a couple hours to complete with achievements incentivising repeated and speedy playthroughs. The game’s brevity suits the narrative perfectly, though — no level or encounter is overdone, and none of the tasks it has you complete become mundane. That’s one of the shining elements that makes Neversong such an incredible game to play: every minor detail found throughout the game is carefully considered, tailored with purpose and oozing its creator’s passion. 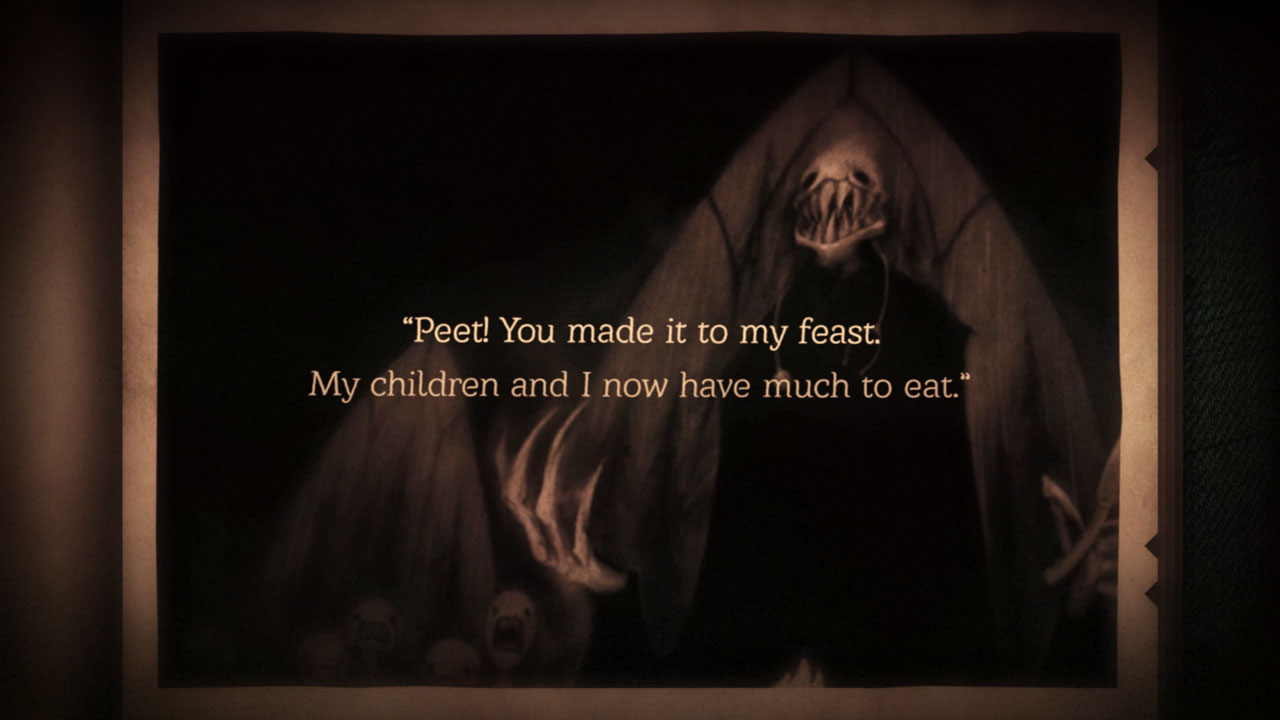 Neversong was first released on Steam and iOS in May of this year with a July release date for all major consoles. Having cleared the story on Xbox One I can strongly advocate playing Neversong on a console. The game looks stunning on a large screen with proper audio support and there is an incredibly cathartic weight to swinging your weapon and defeating enemies, an act that results in a very basic experience system that reinforces the notion of growth and progress even when you are revisiting areas for collectibles or simply exploring.

I constantly experienced pleasant delights of game design from beginning to end. You can jump while inside an elevator to speed up its descent and speed through text boxes with the press of a button, saving your game is an immediate process, and the loading screens are simple-but-effective bars that allow you to maintain the sensation of momentum. None of these elements are particularly outstanding or revolutionary, but they helped to keep me immersed in the game; add that commitment to immersion to an excellent narrative and joyous mechanics, and the result is an experience that’s very difficult to criticise. The only issue I encountered in my playthrough was a bug that made the “Coma Card” collection screen invisible and difficult to access, but aside from that there truly is not much to fault.

Neversong is a delightfully morbid departure from the hyperrealism and quirkiness of the modern gaming landscape. Originally slated for a 2018 release, Neversong is another fantastic argument in defence of the delay; Brush maintained his award-winning reputation by postponing the release until he was happy with the finished product, and he’s got every reason to be. Neversong bleeds passion and creativity, and I am incredibly eager to jump back into its twisted world should Brush decide to release an expansion and/or sequel in the future. 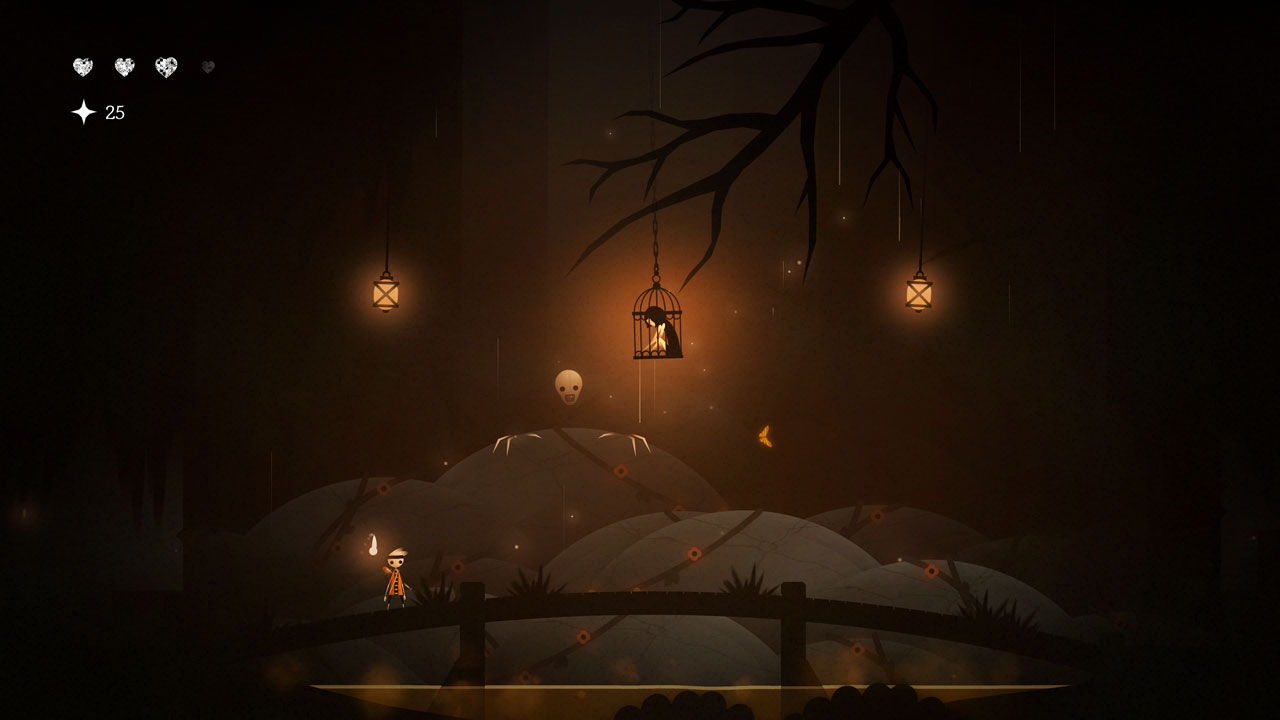 Traverse haunting locations on your quest to find your girlfriend

A short and sickly sweet adventure puzzler that drips with originality and creative passion for perfect game design, Neversong is a fantastical nightmare journey that’ll surely leave you wanting more.