It’s hard to believe that Monster Hunter Rise was developed separately from 2018’s Monster Hunter World. In almost every way, World provides a foundation for Rise to work off, refine and build on top of by drawing on the series’ portable roots. Pulling these two histories together, the old and the new, Rise might be the best entry in the series yet. 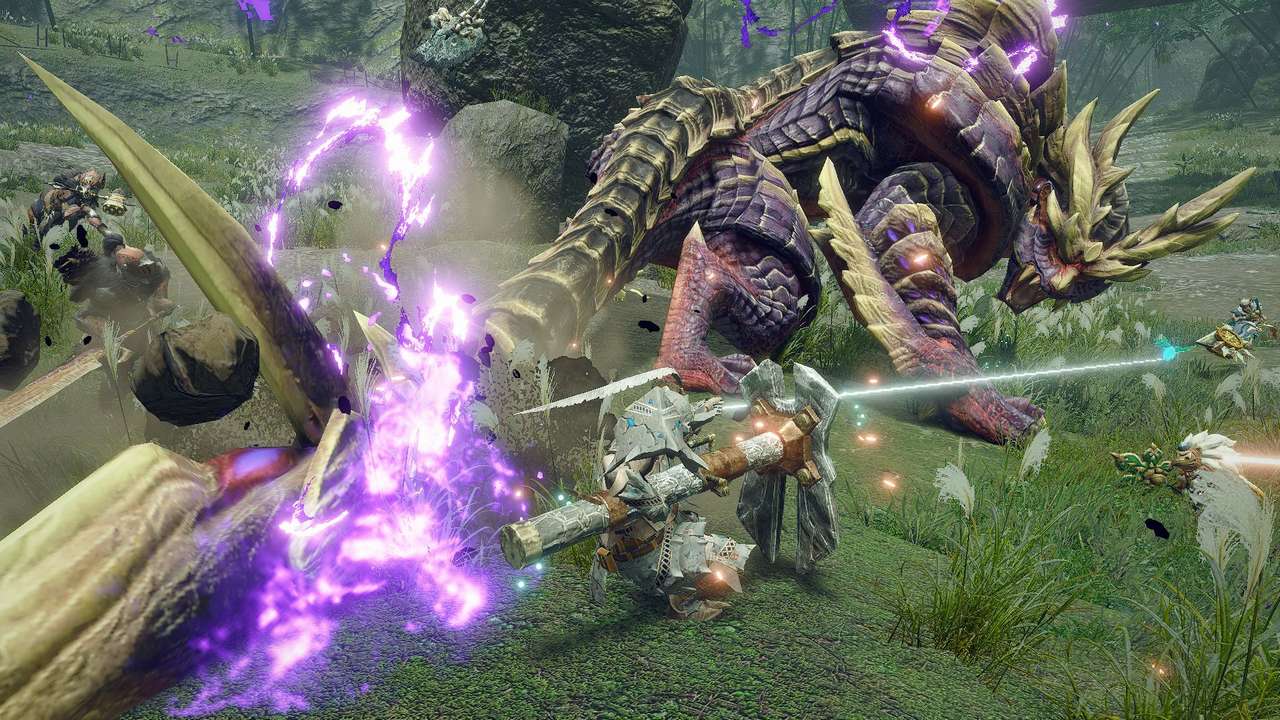 For those coming in cold, Monster Hunter is an action-RPG series that drops you onto self-contained maps to hunt down massive “monsters”, most of them being some form of dragon or dinosaur-like creature, and a lot of them using elemental abilities like spitting fireballs or coating itself in electricity. You know, video game junk. The core loop is simple but elegant — you hunt down monsters, use what they drop to craft new weapons and armour, then use that new equipment to hunt down the next. Each game controls slightly like FromSoftware’s Souls series: while each weapon is distinct from one another, their slow, deliberate move sets mean you typically want to play cautiously while learning a monster’s patterns, growing faster and more efficient every time you hunt.

As games, the Monster Hunter series is unique for its focus on preparation. Especially in earlier entries, which were far more punishing and demanding of the player, preparing for a hunt is what made Monster Hunter so addictive and rewarding. Meanwhile, learning, exploiting and mastering each monster’s patterns throughout a playthrough (and carrying this knowledge between games) is always a joy.

Note that I’m more of a casual long-time fan of Monster Hunter. I’ve played every entry since Freedom Unite on the PSP but rarely continue past the end of Low Rank and early High Rank sections, dropping off when the repetition really starts to set in. For this kind of player, Monster Hunter Rise sets the bar. In so many more ways than I expected, Rise is exactly what I wanted from Monster Hunter World. 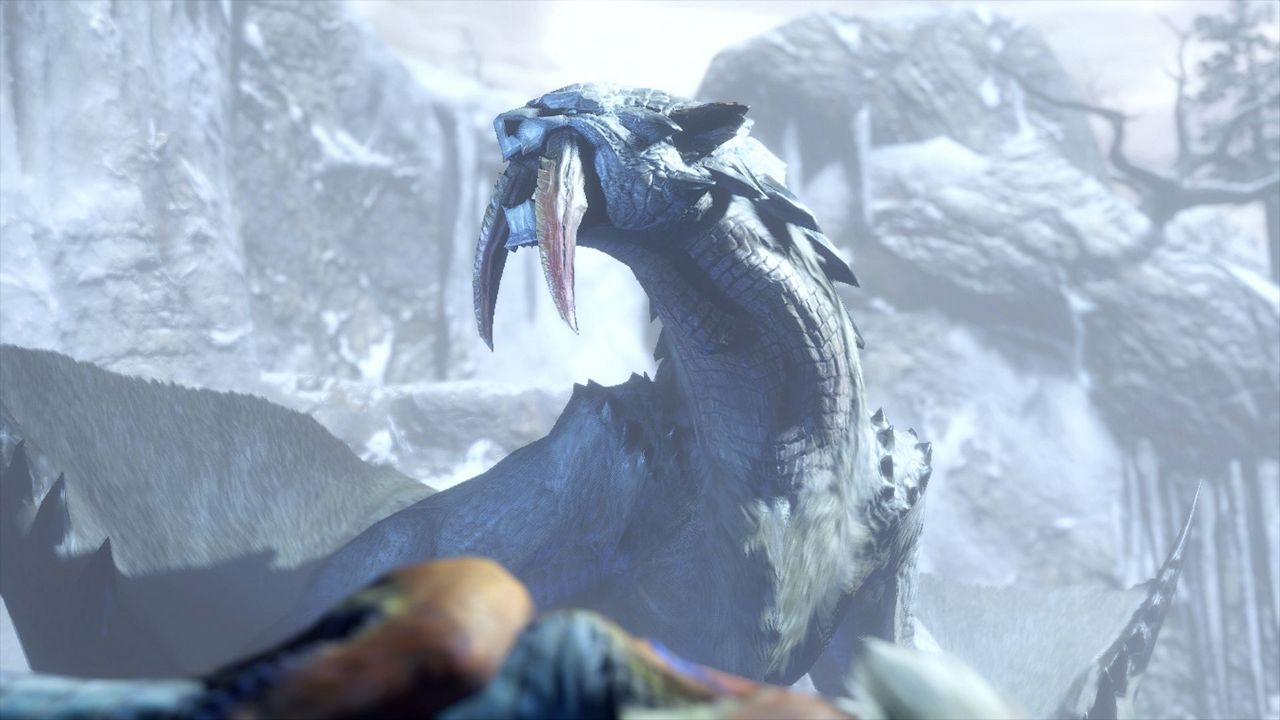 Following World’s lead of drastically modernising and overhauling the series for a worldwide audience, Rise has slimmed down and streamlined the core gameplay loop even further. These changes and refinements are almost entirely for the better but occasionally – depending on the player – flattened down to a fault.

Monster Hunter World’s connected, open world-ish map design returns, but the maps’ detail and complexity have been reduced. This is largely for the better. While World’s maps were impressive, especially as an evolution of the stark sectioned-off geometry of previous games, they could be very busy and noisy on a visual level while their labyrinthine pathways could be complex enough to interfere with the gameplay. This made World both difficult to navigate early on before you learned the main routes and shortcuts through each level, and irritating once you have. World’s desert-style Wildspire Waste map is arguably the best in major part due to its much cleaner pathways and more memorable landmarks.

Rise scales back on World’s maps in complexity, especially creature interactions, but their geographical scope remains more-or-less the same. To make use of your new rideable Palamutes – helper wolves, essentially – and the grappling hook-like wirebugs, maps are generally flatter, with fewer slopes but filled with climbable peaks that shape the routes across it. Zones are generally cleared out and uncomplicated, similar to how they were in titles prior to World, making them easier to navigate, memorise and battle in. In this way, each map in Rise feels more like the disparate sections of a traditional pre-World map stitched together into a coherent space. Each level is also littered with candy-coloured temporary buffs like a Crackdown game alongside the usual resource pickups, giving you a bit more incentive to learn and explore each map during a hunt.

Speaking of pick-ups, Rise wisely removes World’s scoutfly mechanic. Essentially an in-universe waypoint system that highlights both pick-ups and tracks left behind by roving monsters, scoutflies are personal clouds of bright fireflies that direct players through most of World. Initially, scoutflies were a clever way to bridge the historically demanding hunting series with a wider playerbase, but they grow into a distracting form of handholding that only becomes more irritating over time. Instead, Rise directly points out where each large monster is on the mini-map (with an optional Crazy Taxi arrow to guide you) while resource pick-ups now glow softly whenever you’re close by. Though I miss following markings to track down monsters, it’s otherwise a solid improvement that, again, neatly bridges the old and new sides of Monster Hunter. Where World was a comprehensive overhaul of the formula, Rise feels more like a gentler update that retains World’s most meaningful upgrades. 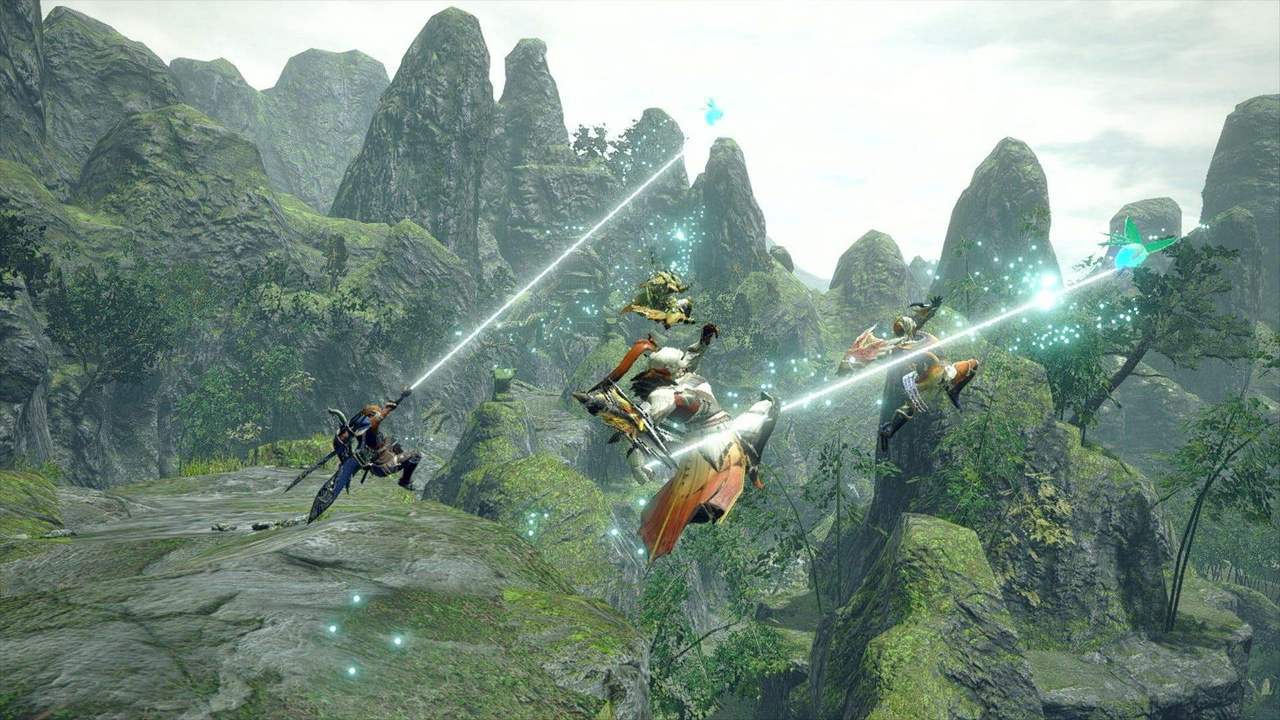 Rise also introduces the wirebug as a new mechanic, both in and out of combat. Essentially a magic grappling hook that “hooks” onto thin air, the wirebug is Capcom’s latest attempt to add more verticality and dimension to Monster Hunter’s core gameplay. Monster Hunter Tri tried out underwater battles; Monster Hunter 4 added more vertical, climbable maps and monster mounting (which was automatically activated after enough mid-air attacks); Monster Hunter Generations added a unique “Aerial Style” move set to help fling yourself into the air more often; and World made mounting attacks more useful and, because of its more complex map geometry and improved controls, easier to pull off.

In Rise, the wirebug flattens all of this down into, essentially, a more involved jump button. The wirebug lets you dash forward or up into the air just about whenever you want (depending on your choice of weapon), while mounting has evolved into full-blown monster riding. You now directly control a monster once you’ve clambered onto them (again, by inflicting enough mid-air damage) and ride them across the map to directly attack other monsters – or instead, charge them into a nearby obstacle for some free damage. As someone who has always liked these mechanics, it’s a fantastic change that expands on the riding gameplay without overcomplicating or overemphasising it.

As a distinct Monster Hunter entry, there are only a handful of new monsters in Rise – nine new additions to the roster this time compared to 22 in World – but each works to spotlight the wirebug, while the returning monsters are a fantastic selection that lean on the more animalistic, bestial side (so almost no Elder Dragons, at least at launch). The first section of the game puts a major focus on these newer monsters instead of saving them for the harder hunts later in the game (which are divided between Low Rank and High Rank usually, though it’s a little different here), and it’s glorious.

There aren’t many, but each new monster in Rise is distinct and memorable. From the dancing, swirling Aknosom to the manic Bishaten with its Congalala-like habit of tossing a barrage of fruit, the Somnacanth swimming gracefully along with its massive cape-like head fin cracking shells between its claws to either blind or ignite you, or the yeti-like Goss Harag slathering ice onto its arms that stretch out into long Sub Zero blades, they all line up closer to the more endearing, animal-like side of the series’ bestiary with lively, varied attack patterns that I loved learning. It says a lot that the flagship monster Magnamalo, with its samurai armour plating shooting balls of hellfire, is one of the least memorable additions (at least to me). 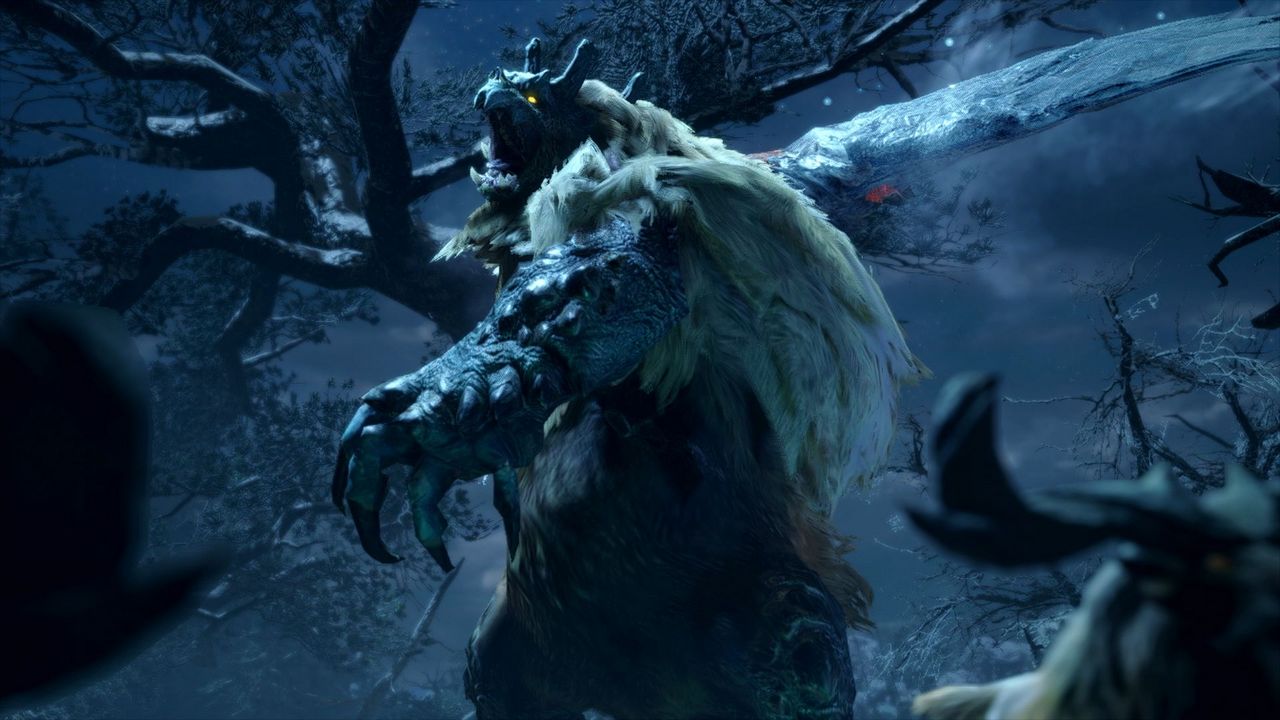 Finally, Rise introduces a new type of missions called Rampages. Rampages fall somewhere between a tower defence mode and a horde mode: you set up turrets and equipment (either manned by an AI or empty for the player to use) around a small “last stand” set-up in front of the village’s main gate to defend from an arriving horde of monsters. It’s a panicky balancing act as you rush around replacing your turrets with better/not-broken ones, activating special types when the time is right – such as powerful temporary hunters – and jumping into the fray yourself to keep the horde at bay. They’re shorter, hectic missions that make for a solid diversion from the usual hunts, though they probably work better with other players.

Visually, Rise makes for a surprisingly close comparison to World. Though it understandably lacks some of the higher-end visual features, Capcom manages a very high image quality via some effective anti-aliasing, updated lighting and modern camera techniques – especially noticeable during the short cutscenes that play before you hunt a monster for the first time. Rise runs at a steady 30 frames per second, so you should wait for the PC port that’s set to release next year if a higher locked frame rate is a priority.

The most impressive technical detail of Rise, though, is the loading times. Loads in and out of hunts are very quick, something like ten seconds at most, while the menu-based shortcuts that let you zip around the game’s main hub world and level camps are pretty much instant. Compared to World’s disappointing load times (at least on console), this is a total game changer and keeps you stuck in the dopamine-buzzed gameplay loop that Rise hones and sharpens in so many ways already. 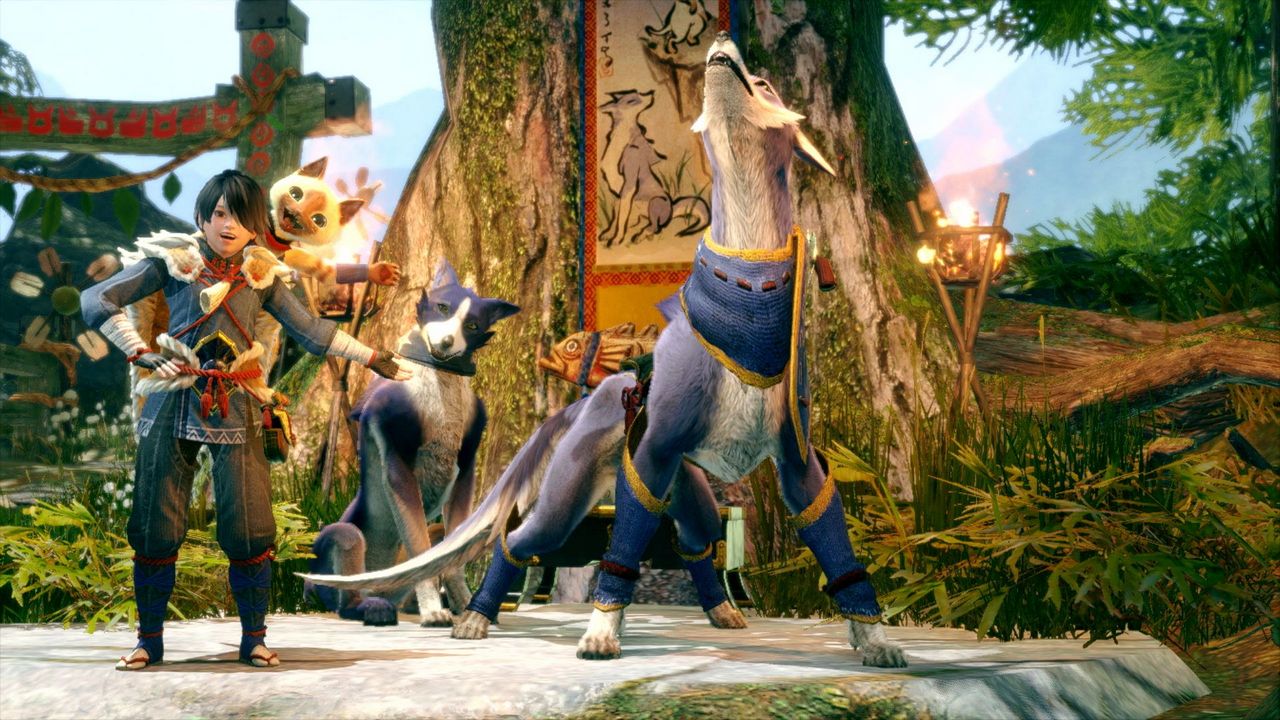 Rise snatches the torch from World and runs on ahead, further streamlining every aspect of the Monster Hunter series. While I’m sure there are broader issues beneath the surface, as always, and hardcore fans will be frustrated by some of its many changes, Rise is exceptional where it counts. Capcom has finished off what World started and succeeded where it didn’t.

[…] John loaded up on some Monster Broth to review the action in Monster Hunter Rise. […]