MO:Astray is not a new game. The pixelated, side-scrolling puzzler-action delight first appeared on Steam almost a year ago, the product of a collaboration between Rayark Games and the team of six Japanese college students known as Archpray. Overwhelmingly positive user reviews piled in for the adorable green blob named MO and its single-player journey through the derelict laboratory in which it was created, and it gained somewhat of a cult appreciation; unfortunately, an unjust, inexplicable lack of coverage meant that it didn’t achieve the major mainstream success that it really deserves.

MO:Astray tells a strangely deep and compelling story, even if its dialogue and character development feel like they’ve come straight out of an anime — unlockable comic books that portray every cliché anime character you could think of serve to bolster that feeling, but that’s not a bad thing. You awaken as a confused creature with limited abilities in a strange place, with a mysterious but affectionate voice urging you to navigate a ravaged facility filled with zombie-like humans, murderous machines and hostile aliens. The environment is rife with lore and context that all builds towards the finale, where the curtain of mystery drops to explain who you are, what happened and what will come next. 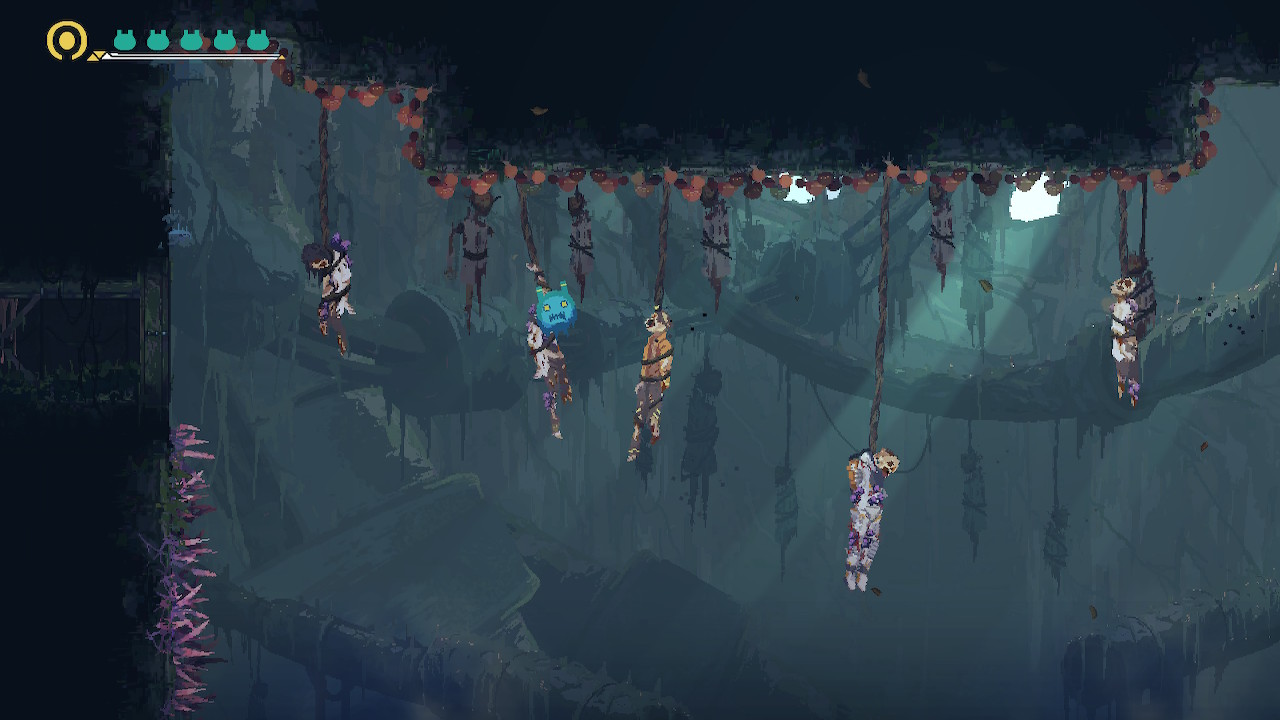 As a curious blob you traverse the environment, solving puzzles to delve deeper or higher into the facility by hurtling yourself through the air, creating a core trajectory-physics focus on movement. Deviously simple traversal mechanics that evolve and escalate are heightened with a fascinating ambience that intertwines serene beauty, sci-fi horror and pixel-cuteness flawlessly… and then, as you make your way through this super-science facility that MO calls home, you’ll learn how to mind-control enemies by sitting on their heads and neutralise them by tearing their skulls from their spines.This weird, yet deeply satisfying mixture of cutesy horror creates an engaging world that continues to escalate and evolve everything you think you understand about MO and what it’s capable of.

Released just this week, the Nintendo Switch version of MO:Astray marks the game’s first console port and an arguable homecoming for the game. The port brings all of the quality-of-life updates that Archpray and Rayark developed for the PC version, along with two new game modes and some additional concept art — all of which was included in a free update for those who own the PC version, so that nobody misses out.

The first of the new game modes featured in the Switch release — and the one I chose to sacrifice myself to for this review — is Disaster, a difficulty modifier that increases hazards, obstacles and the amount of damage MO takes. Disaster mode also increases the speed at which hazards, such as machinery, and chase sequences move, which changes your skill requirement from “a bit of patience” to “don’t bother unless you have cat-like reflexes, or a ton of patience”. Of course, MO:Astray is extremely accessible in the lower difficulty modes so everyone will be able to experience its entire story… I just like a good challenge.

Alongside the new Disaster mode is a new time-trial mode called Speed Mode, which puts a big ol’ timer on the screen as you launch MO through the story to aim for the fastest completion time you can get — and the ensuing bragging rights the come with ranking up high on the global leaderboards. MO:Astray helps you on your way to said high ranking (and appeases speedrunners everywhere) by streamlining the story in this mode, removing cutscenes and unnecessary transitions in order to allow you to focus on speed, efficiency and completion. It should be noted, however, that Speed Mode’s default difficulty appears to be Disaster, so you’ll need to bring your absolute A-game for the most dangerous journey MO:Astray can throw at you.

The majority of the game’s puzzles give you plenty of time to solve them but of course, as the game evolves, time becomes a core mechanic in numerous puzzles and combat sequences. The Joy-Cons largely handled the dexterity required for some of the more intricate movements quite well, but in some of the higher-intensity situations I found myself feeling betrayed by the default hardware and forced to switch (pardon the pun) to my Pro Controller for greater fidelity. I only really encountered these issues during my Disaster playthrough, though — the lower difficulties didn’t require any adjustments… plus, as the upcoming Multiplayer release will make clear, I am a slave to optimised controllers (oh, and Joy-Con drift still sucks). 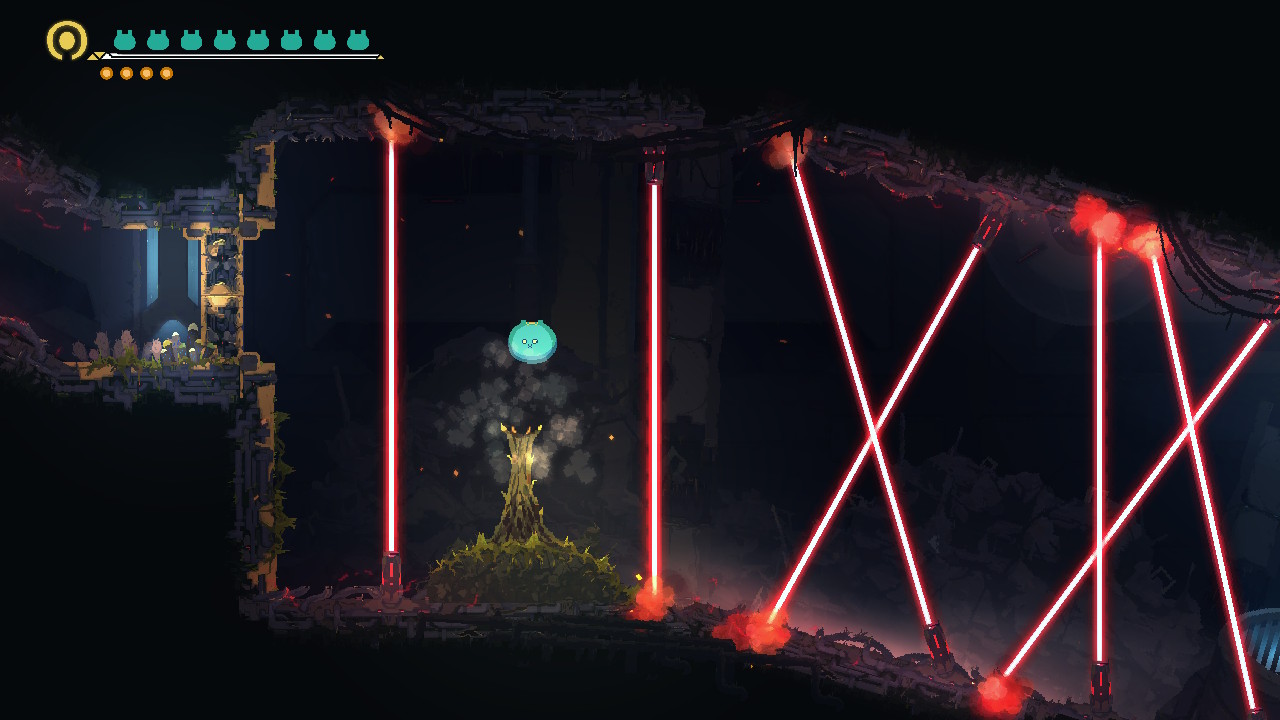 It’s all fun and games until you reach the laser level.

When I first expressed my interest in reviewing MO:Astray, I was expecting yet another solid indie puzzle-platformer, set in a haunting world filled with curious characters (which seems to be my specialty genre); it’s very much that for the first five minutes, and then it just explodes with depth, ingenuity and originality, with combat sequences and boss battles so complex and well-executed that I found myself confused as to whether I was still playing an indie game. The narrative and all of the gameplay mechanics are so smoothly interwoven, the world so engaging and rewarding that I found myself smiling like a child for most of my playthrough. I was constantly surprised with what happened next, and incredulous as all the mystery and powers you displayed made sense as my journey reached its climax.

For just AU$15 on the eShop, MO:Astray invites you into a lengthy journey of approximately ten hours, through a meticulously-crafted world that’s perfectly accessible to gamers of any skill level.     I’m tempted to compare some of its more powerful moments to those found in other incredible games, but that would be an immense disservice to an incredible, original experience that’s currently the best game I’ve played this year — and I’ve played a lot.

An excellent, original game experience that you should be furious that you didn’t know about, MO:Astray offers a blend of intrigue, fun and complexity that is few and far between in games of any genre.