There’s an art to a good multiplayer or esports title. Think back to your favourite: it probably has that addictive “easy to learn, hard to master” gameplay loop that always makes you feel like you can do better. It likely has some sort of engaging visual style that makes you delight in watching the action on screen. It’s probably got heaps of variety, keeping you playing round after round. Well, I just got my hands on Knight Squad – now on its second go round, releasing on Switch – and I can report that it is unfortunately none of those things. 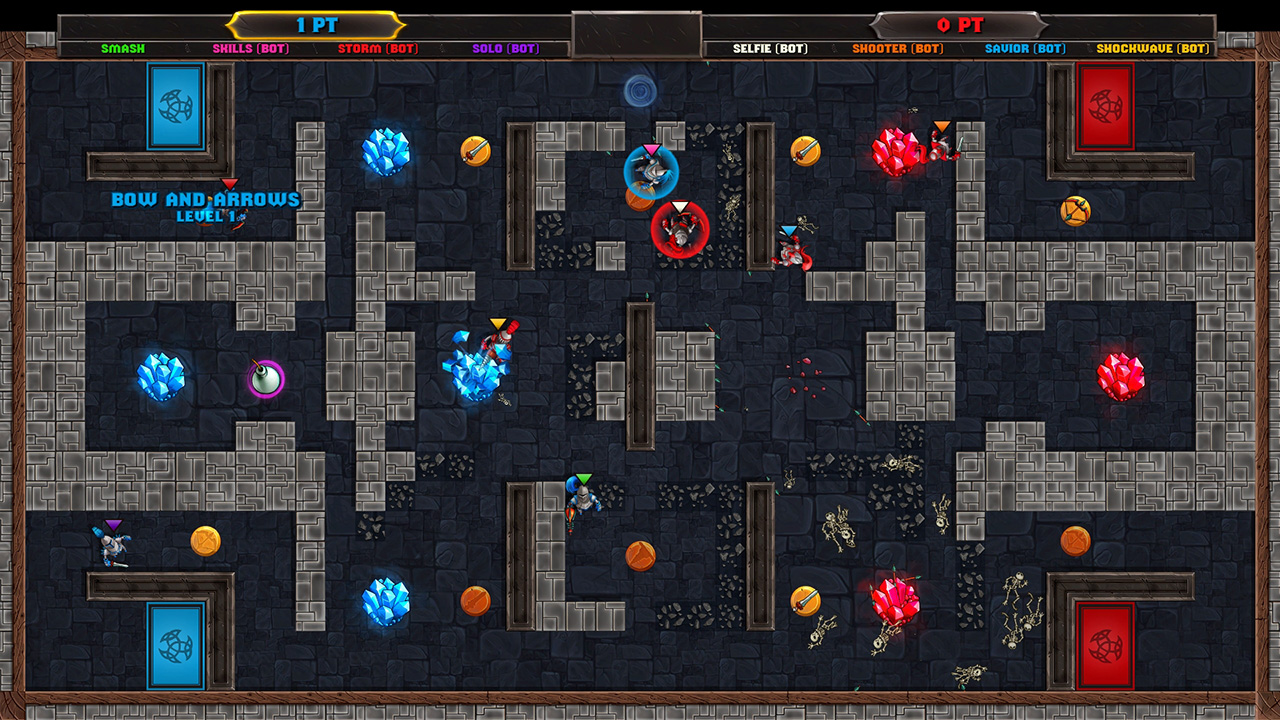 I’m going to try and avoid tearing Knight Squad a new one in this review. It’s difficult to convey how little fun I had, and while that’s maybe because I’m largely confined to my house at this point in time and this is a multiplayer game without an online mode… it’s a multiplayer game without an online mode. There are three modes to select: Versus, which lets you play a variety of different match styles against AI or physical humans in the same room; Challenges, which gives you quick little missions to test your skills; and the completely inexplicable, why is it here, who made these decisions “Bot Challenge” which lets you watch an AI-only match. Is that supposed to be fun? Someone on the development team here had to make the conscious decision to say “we should remove the online we had on PC and Xbox in 2015, which would give our game longevity and community, and I think we should have the players just not play our game at all and watch a computer do it instead.” 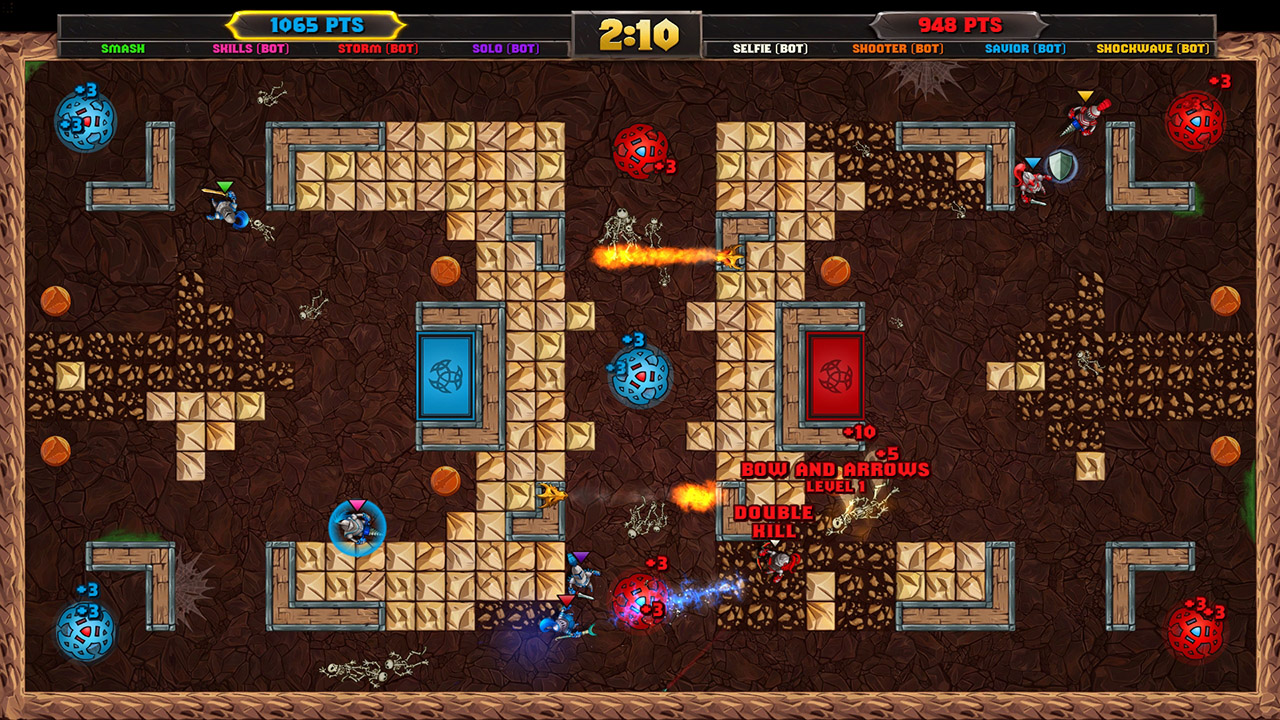 Granted, watching a computer play this game could be useful to pick up some cool strategies and advanced maneuvers… if any of those existed. Knight Squad is bottom of the barrel, mid-2000s Flash game levels of complexity. Let’s outline a Versus match: you pick a knight character from the menagerie (they all demonstrate a different personality and ability when you pick them, but they are entirely functionally identical), select a game type and a map and bam! You’re into it. Eight players is the standard here, so any open spots not filled by a human will be controlled by the computer. Each of the barely distinguishable knights on the muddy, indistinct playing field runs around and swings a sword and if you hit someone they die and respawn. There are also some more powerful weapons and power-ups spawning on the field that you can pick up for a temporary edge in battle. That’s the game. It’s moving with a single button to attack, and even then it’s not good — aiming a ranged weapon is entirely dependent on the direction you’re moving so fine control is completely out the window. It’s immensely easy to lose track of your character since they’re just grey metal on a grey background (okay, okay, you get a little three-pixel blip of colour). Knight Squad’s visual design really is abysmal to look at, and on top of that it can’t even manage to be functional. It’s just a mess. 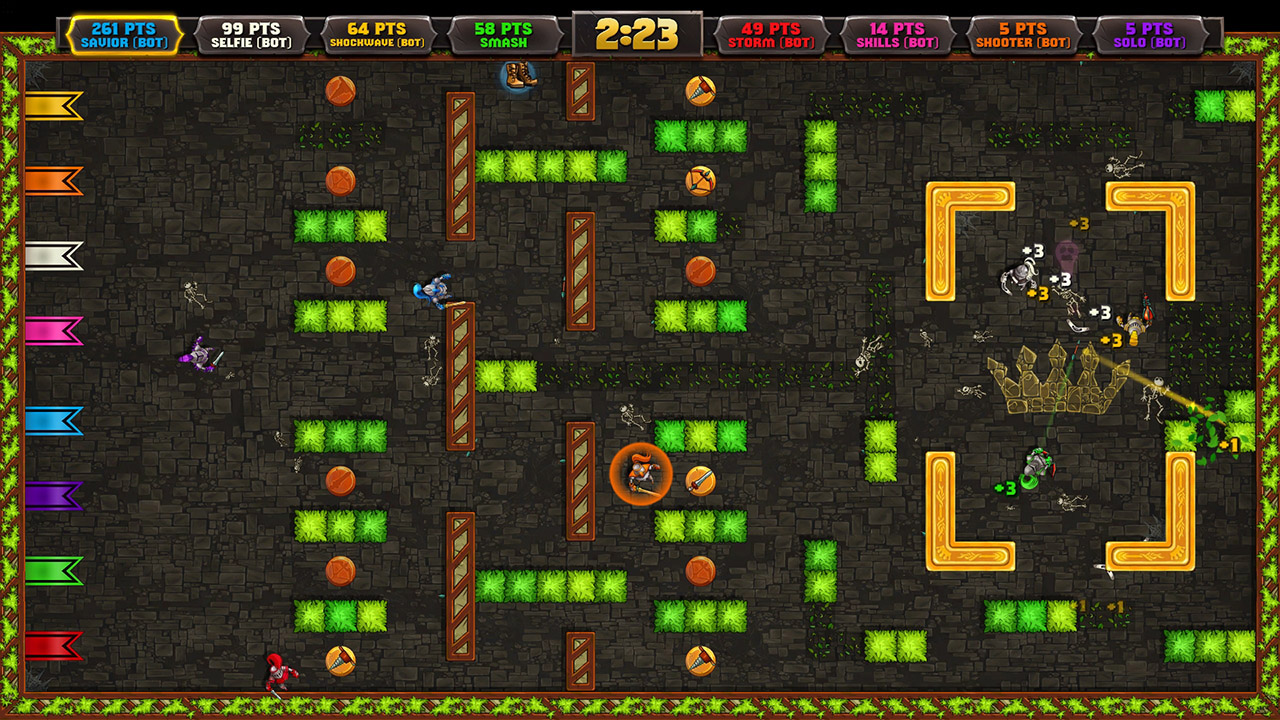 Let’s (try to) dig for some redeeming qualities. The versus mode does have a fair few game modes to offer — mostly standard stuff like capture the flag or king of the hill style modes, but the Arms Race and Juggernaut modes are interesting enough. The former constantly switches your weapons as you get kills and the latter has a massively powerful minigun in the centre that requires some careful thinking to take the player who grabs it down. I imagine if you had friends over who were maybe really into top down competitive games and everyone forgot to bring good ones this could suck down a couple of hours before it got boring.

There’s a decent selection of maps too, although the experience is much the same on each of them, with no real unique features or gimmicks to speak of. The Challenges mode is a more engaging single player mode than just fighting bots, giving you unique tasks that feature enemies and weapons that are less prominent in (or absent from) Versus mode. Again in the “utterly unexplainable design decisions” category, though, they’re unlocked sequentially — if you get stuck because the aiming is difficult or the movement is slow and you simply can’t execute what the game’s asking you to execute… you can’t play any other challenges. Hooray! 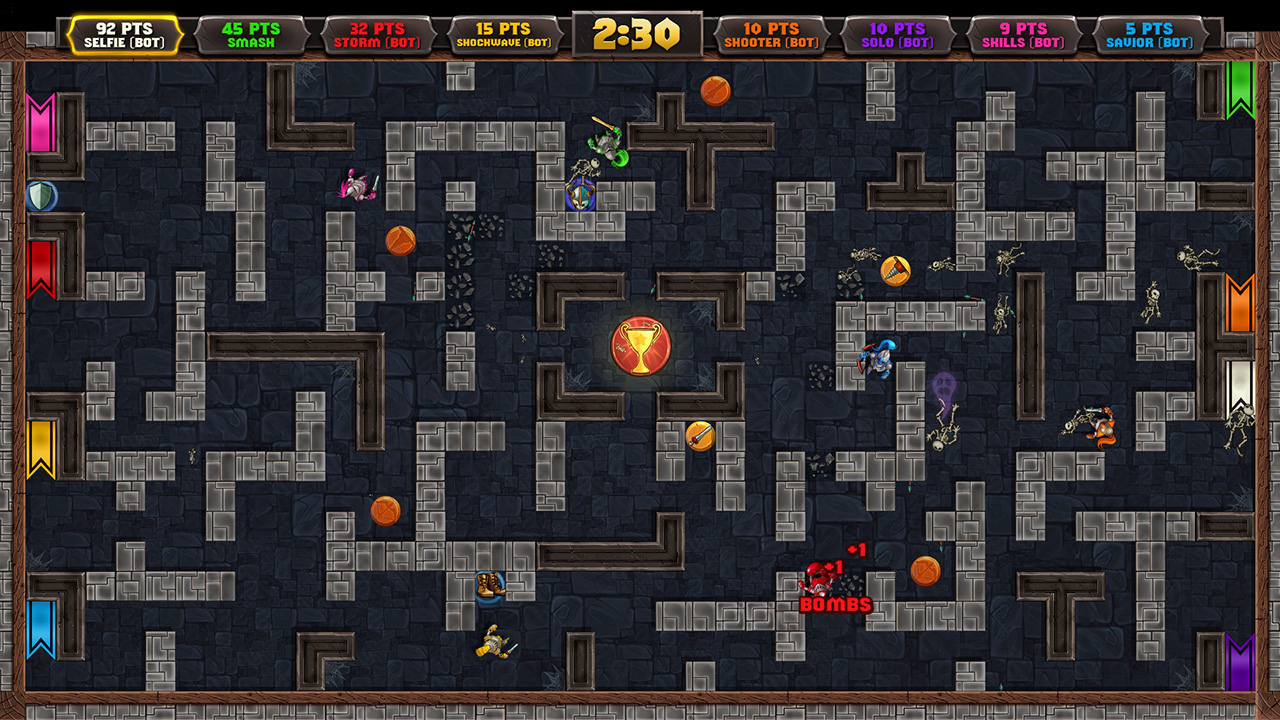 I can’t recommend away from this game enough. It’s boring and ugly, with nothing to hold your attention and arguably nothing to even capture it. You’re much better picking almost anything else from this genre — Knight Squad just isn’t good.