Kingdoms of Amalur Re-Reckoning Review — Something Old, Nothing New

Kingdoms of Amalur: Re-Reckoning is a great game, but it’s not a good remaster. There’s a fun role-playing game to be found underneath its outdated visuals, with character progression and combat mechanics that haven’t aged a day, and although the writing is less-than-stellar, it offers a massive world with heaps of lore to learn and plenty of quests to complete. It’s just a crying shame that there’s nothing new eight years later.

The game’s set-up is as simple as a fantasy plot comes: you’re the chosen one (or, more accurately, the un-chosen one), unbound by fate after being resurrected by some magic gobbledygook and now the only person capable of changing the world’s fate. Add in an immortal army that’s trying to resurrect an evil-God, and you’ve got yourself a pretty standard 20-hour main story. Best of all, it’s only a slice of the game’s quests, with plenty of factions and random NPC’s waiting to be saved in the open-world. If you’re looking for a game to sink a couple hundred hours into, Kingdoms of Amalur’s got you covered.

It’s a shame the game’s writing is so dull. The people of Amalur are barely characters; they are encyclopedias with legs. Time and time again, despite every effort, I found myself skipping dialogue and avoiding conversation. Most characters seemed the same, serving as another obstacle between me and the combat, and I have no idea who anyone is because everyone is boring. You can have the longest, most comprehensive lore in the world, but if you can’t effectively translate it into the game, then it might as well not be there at all.

That is a huge issue considering the game’s lore is actually interesting. The Fae, for example, are cool. They are a race of immortals re-born after each death. With their resurrection, they’ll return to a job (like being an alchemist) they’ve had for eternity, serving The Great Cycle. Faes belonging to the House of Ballads re-enact the race’s greatest tales each season. They slay trolls and other ne’er-do-wells exactly as it happened before. Even though they’re immortal, they never change. They are a fascinating race and just a slice of the game’s world. It’s too bad it’s all wrapped up in crappy characters and lazy writing. 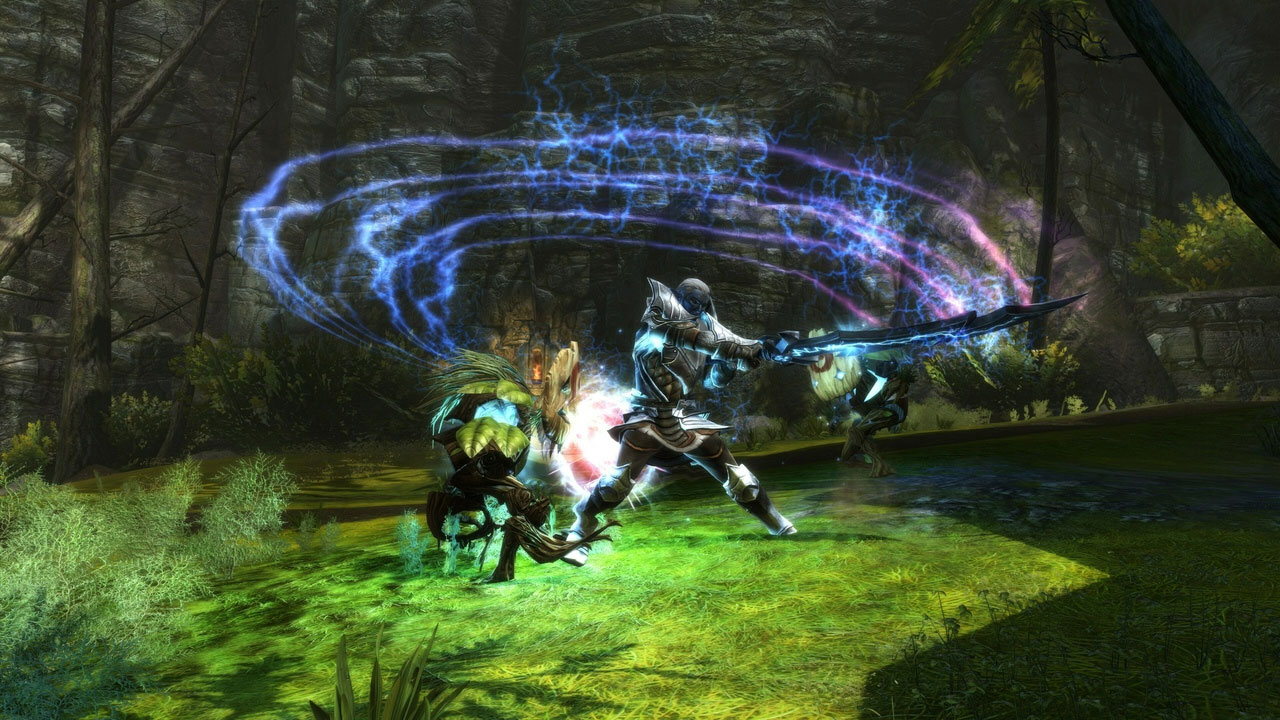 On top of that lazy writing, the quests are really inconsistent. The design itself is usually fine: talk to an NPC, go to an area, slay some monsters, get paid… it’s your standard RPG fare, which means it’s fun, but it also gets repetitive. When they’re bad, though, they are really bad. I once got asked to speak to three different people in town, which was super simple until I stepped outside — the three characters were in three separate buildings, which means that I’d have had to sit through nine loading screens. No matter how easy it is, I have no intention of completing a quest if two thirds of it consists of waiting for the game to catch up. Thankfully, I didn’t have to, as these issues mostly affect the side content, meaning that you can go through the campaign and faction quests without fear.

Eight years later, Kingdoms of Amalur’s combat is still its saving grace. It plays very much like old-school God of War: a third-person hack-and-slash with two buttons to attack, a dodge and a block doubling as a parry. Super satisfying with its arcade-like gameplay, it’s the thing that’ll help you push past the lacklustre writing. While the combat isn’t entirely new, few games have as much variety as Kingdoms of Amalur. Weapons range from fantasy staples like long-swords and sceptres to more out-of-left-field picks like Chakrams; a pair of magical, giant circular blades used at short and medium distance. Equip any two of nine unique weapons, and you’re left with 45 possible combinations.

This variety also finds its way into character progression. As you level up, you’ll be given the choice to spec into three separate trees: Finesse (rogue), Might (warrior) and Sorcery (mage). Other games typically bottleneck you into choosing a single specialty, but Kingdoms of Amalur’s Destinies system encourages you to mix and match your skills. Fans of the staff and sword might pump points into the Might and Sorcery trees, and then receive the option to become a “guardian” — a Destiny unlocked by investing equally in those two trees that adds elemental resistance and the ability to convert damage into Mana… also known as the perfect choice for a player who likes to cast spells and swing swords. This variety makes progression personal in Kingdoms of Amalur, and it’s an achievement that I haven’t seen emulated anywhere else.

Visually, Kingdoms of Amalur: Re-reckoning looks… old. The game may be less blurry, the world brighter and objects less jagged, but it’s the same graphical package we got in 2012. The world is flat and barren, with textures lazily repeated and stretched along every floor; the lighting is outdated and character animations can look incredibly stiff. It’s a weak effort that’s somewhat saved by the game’s visual design. The world may feel flat, but the enemies look distinct; the armour is big and bold, and the cities feel other-worldly. It has this World of Warcraft-esque cartoon aesthetic that offsets how old the game looks, but not by much. If you’re going to enjoy Kingdoms of Amalur’s aesthetic, you’ll have to ignore its age. 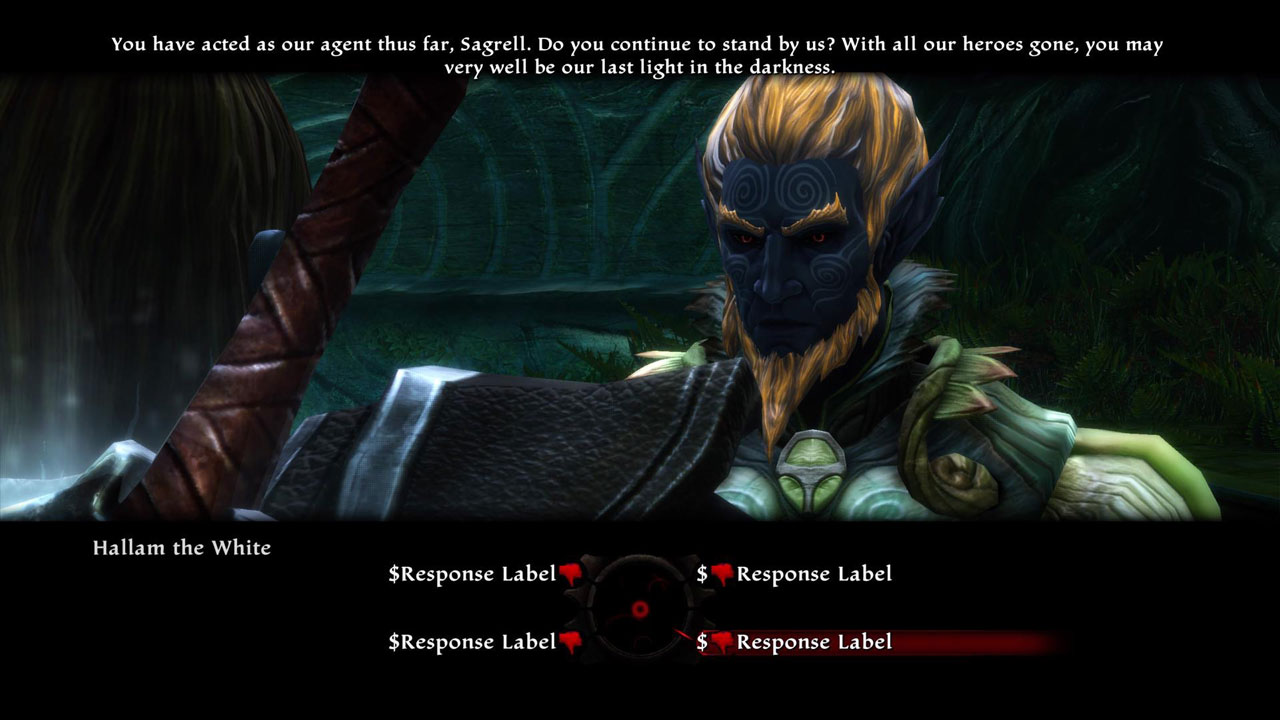 To be fair, new developer Kaiko has made a few changes to this remaster besides the higher resolution: enemies now scale to your level, which removes the level-gating present in the original release and allows you to explore the world at your own pace; there’s also an extra difficulty mode, and Kaiko and THQ Nordic have included the game’s expansions in the re-release… but that’s all. It’s incredibly minimal and incredibly disappointing, especially when you consider just how buggy the game could be. Throughout 30-plus hours of gameplay, Kingdoms of Amalur: Re-Reckoning pretty much always felt like it was about to break — I experienced unlabelled conversation options (see above), a dozen visual and lighting glitches, one crash and a game-breaking bug that forced me to reload an older save file. To Kaiko’s credit, it has released updates to address some of these issues, but that doesn’t change the lack of effort that went into this so-called remaster before its release.

Flaws and all, Kingdoms of Amalur: Re-Reckoning is a good game. The lore is rich, but the writing and quests are horribly inconsistent; the world is beautifully built, but the graphics are old enough to graduate primary school; the combat is flashy, fun and deep, but nothing’s changed in either years… It’s a good game, but Kaiko and THQ Nordic missed their opportunity to make it a great game.

Kingdoms of Amalur’s remaster did little to change the game: the combat and character progression are as timeless as ever, but everything else is still eight years old.