When Kingdom Hearts III first released, I found it a fun, if shallow, adventure that had excellent combat mechanics and plenty of options for the player, but didn’t actually give players anything to use those options on. My opinion of the game has stayed largely the same since then — the much-anticipated Critical Mode, which considerably increased the game’s difficulty, did improve the game quite a bit but it didn’t remedy its most important issue: its lack of any real post-game content.

That’s where Re:Mind comes in. Set towards the end of the game’s story, the expansion really lets Kingdom Hearts III’s combat system shine. It­ takes place during the final few battles of the story, and is divided into two parts: Re:Mind and the LimitCut Episode. Within these two parts, it fills in many of the original story’s gaps while also adding extra boss battles and other scenarios, and also turns Scala Ed Caelum — which was originally just the arena in which you battled the final boss’ first phase — into a fully explorable world.

Without a doubt, though, the most significant offering that Re:Mind brings to the game is the additional playable characters. When fighting certain bosses, the game gives you the option to either continue with Sora, or switch to one of his allies, complete with new combos. These extra characters add plenty of variety to the game, but they’re unfortunately underutilised; because you only get to use them in single fights that don’t last all that long, you never really get to explore their unique movesets, which is a shame.

While the Re:Mind portion of the expansion makes for a brilliant addition to the main story, the LimitCut Episode is where you’ll find the bulk of the new content. It’s set entirely after the story, and it’s comprised entirely of fantastic new boss fights: harkening back to Kingdom Hearts II: Final Mix, the battles are rematches against all thirteen members of Organization XIII.

Unlike the Organization battles in the main story, LimitCut sees you fighting them mano-a-mano, with no allies in sight. Combined with the bosses’ new attacks and patterns, this makes the battles extremely intense, and all the more difficult; even at max level and with the strongest equipment available in the game, I found myself dying repeatedly. Most of the battles require practice, memorisation and healthy reaction times, but there are some that rely more heavily on some sort of gimmick — those did stick out as being far less enjoyable, but the vast majority of the battles are excellent. 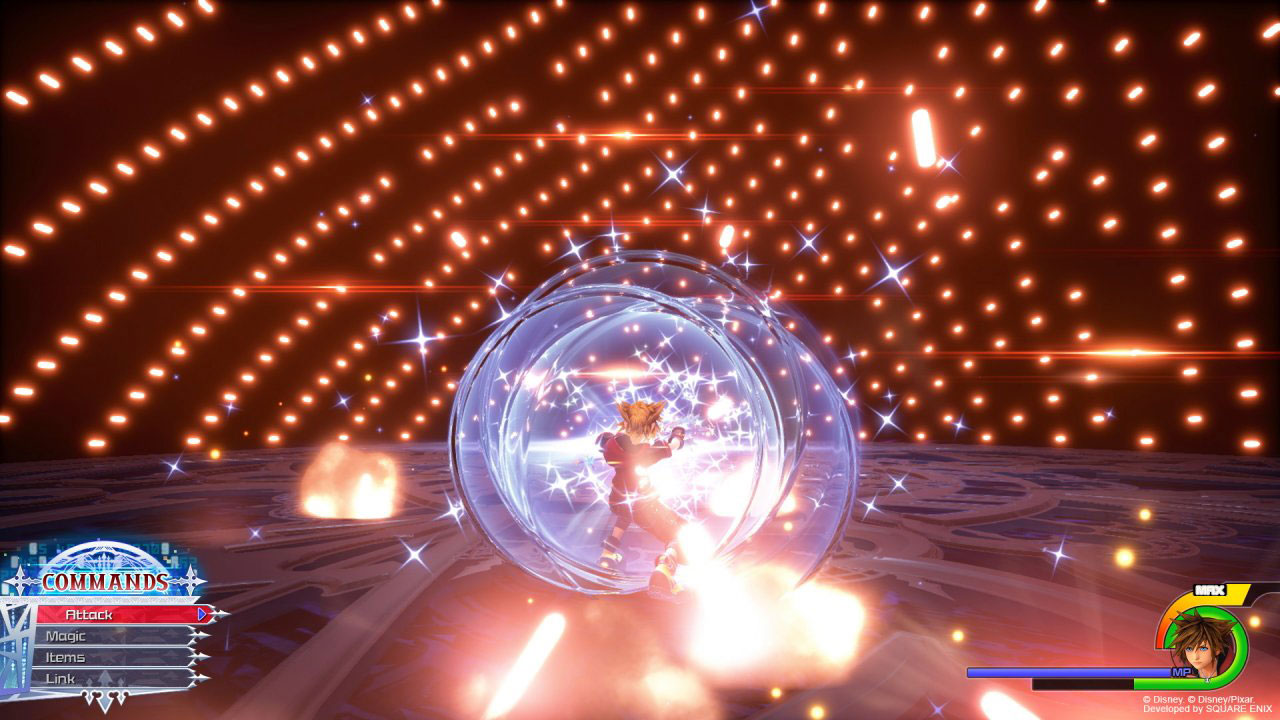 The LimitCut Episode easily makes up for the lack of post-game in the original story. The battles provide a major challenge, expertly balancing difficulty with playability and forcing you to use every ability, every item, every trick and every morsel of knowledge available to you. On top of that, they very rarely feel overly punishing; whether I failed to dodge correctly, didn’t recognise a developing pattern or simply made the wrong move, all of my mistakes felt like they were my own fault rather than the result of imbalance or poor game design. Not every battle manages to be perfect, though. As one would expect with 13 new battles on offer, some of them are significantly worse than the rest, but those battles are still good, especially compared to the boss battles in the base game — it’s just that every other fight manages to be so much more.

With additional story elements, flashy new scenarios, fantastic bosses, and more variety in general, Kingdom Hearts III: Re:Mind is an excellent expansion to a game that really needed it. It takes Kingdom Hearts III’s core mechanics and pushes them to their limits with battles that truly live up to the potential that the game originally failed to fulfil.

Kingdom Hearts III: Re:Mind fills a lot of the gaps in the original story, transforming the experience as a whole from a fun but ultimately shallow and uninspired game to a fast-paced, challenging experience full of exciting moments and tense boss battles.