What’s the proper genre name for wacky flailing arm games? You know the type. Esoteric keyboard or controller inputs control some deliberately out-of-control limbs or tentacles or what-have-you in order to solve some puzzles. Your Gang Beasts, your Octodads. I did a search and it looks like Wikipedia just calls them “third person adventure games,” but that doesn’t really capture their frustrating, off-the-chain spirit at all. I’m going to pioneer the term “QWOPlike,” mostly so you’ll have to read it multiple times through this review and I’m loving that gut punch of secondhand embarrassment you just experienced, but also because we need some shorthand to make things make sense. The latest GWOPlike to hit the wilds of the Steam store is Melbourne’s Lyre Lyre Studios’ debut release, Human Simulator — and it’s a worthy addition to the burgeoning genre.

Human Simulator is constructed fairly straightforwardly. You’ve got four levels of escalating difficulty, plus an optional tutorial, all of which will see you taking (Robot? Alien? Robot alien?) protagonist Hugh Mann through various aspects of regular human employment, using the mouse and a few modifier keys to control his head, hands and feet to most resemble someone who is both a) definitely a real person and b) somewhat competent at following instructions. As you would expect from any good QWOPlike, it’s possible to get this very wrong, very quickly: Hugh’s head, while claimed in-game to be made from a durable polymer, easily swings around at unnatural angles and inside itself if you’re not careful with your mouse inputs. Hands can be broken and even simple tasks like pointing to a door can result in pain and/or discovery. While yes, the control scheme is fun and wacky and as frustrating as it needs to be, there are some nits to pick: there are no situations requiring coordination between body parts, and the penalties for messing up are generally small, so it can come off feeling a little too simple. There’s also a part in the final level where you are required to move some objects with a crane that goes on a little too long, with very little challenge present. It’s tedious, and while it only lasts five or so minutes, in a half hour level that becomes a big percentage. 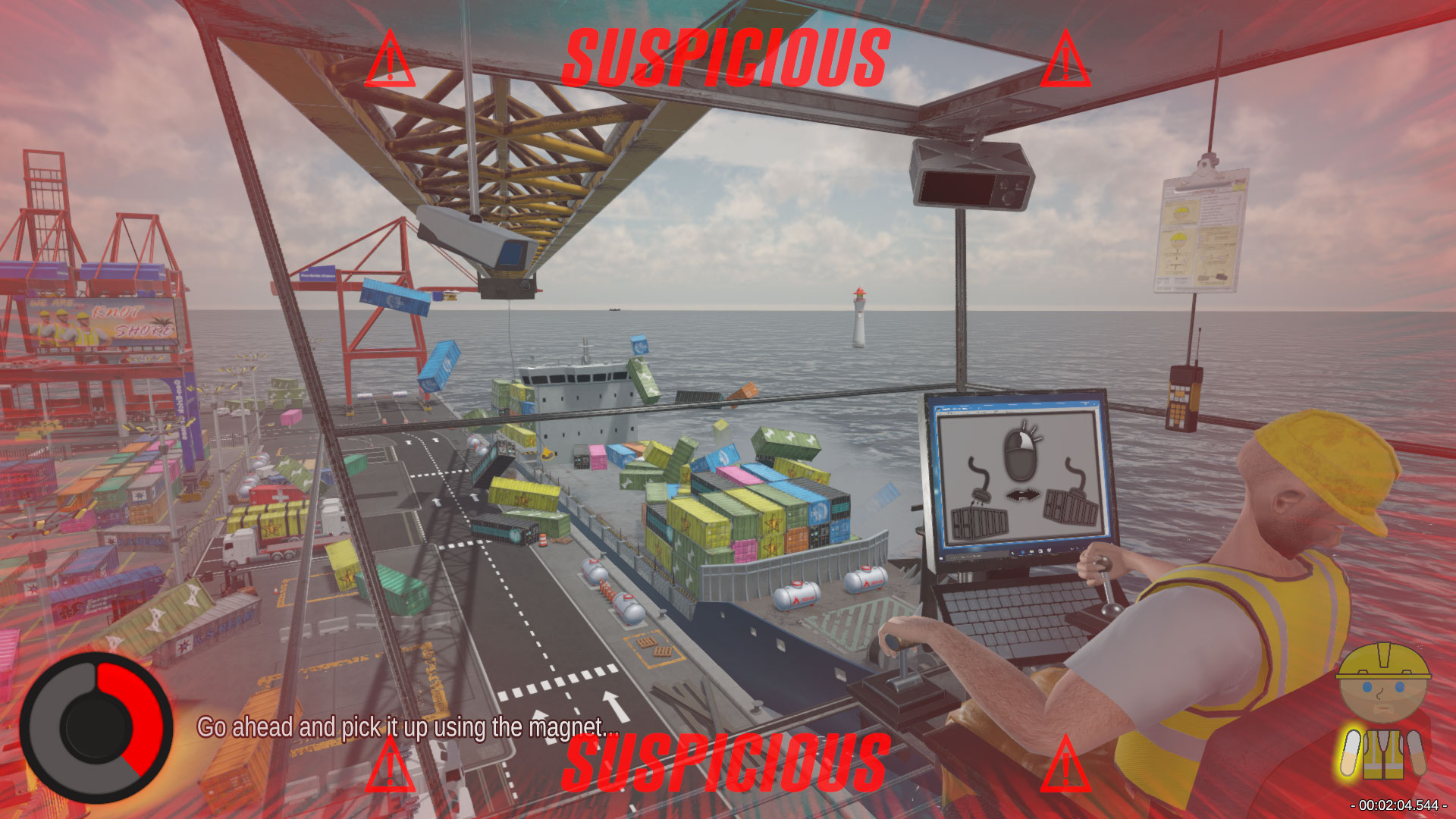 Picking those nits undersells the surprising variety present between the levels, though. There’s another crane section, and while similarly easy to exert control over, there are explosions, safety inspectors to silence and lots of crates to knock into the ocean to indulge your baser instincts. You’ll go from that straight into being a security guard, which requires much more precision and focus to complete. The aforementioned final level throws an astonishing number of different buttons and levers on a control panel your way, and it would take a smarter man than me to remember what more than 10% of them do. There’s a hint system, which will show you what to press or grab at relevant moments if ever you miss a cue, but thankfully it stays in the background for the most part, only popping up when it’s apparent you’re taking much longer than you probably should. This can be disabled as well, which is a nice option for what I feel is the more challenging experience. Completely separate from the main game, there’s also a fun little physics-based marble game accessible from the menu (a stylised living room seen through Hugh’s eyes, a nice little touch there) which amused me across its 30-odd levels. I’m not sure why it’s there, but it’s fun, and it nets you an additional trophy for the living room mantlepiece along with more progress towards ticking off the game’s many, many achievements. Those, along with challenge times for each level, give Human Simulator the stretch it needs — playing through took me about two hours, but doing the replays and practice necessary to hit 100% would take a fair bit longer. They certainly are challenging times.

I haven’t got to the best part though: the writing. I could write a whole paragraph on this, and I will, because this is a review, but to cut it short Human Simulator is hilarious. I think what got the most giggles out of me was the use of the same character model for every character: the stubbled, balding Hugh is also the base for everyone else. Hugh’s family photo in the living room? Three Hughs, one just small and one in a deep scoop neck. The man interviewing you for a job? Same model. The young girl in the hospital? Small Hugh with blond hair. It’s a laugh every time you see a new character and I think my favourite implementation was where you’re asked to take out the safety inspector and you’re… shown a picture of him so you can identify him. It’s great. There are sight gags everywhere, lots of referential humour to boot — I loved the various Neon Genesis Evangelion jokes in the nuclear reactor level — and as a whole it really is rare that something doesn’t land. The dialogue is good too, and skippable if you’re trying to hit the faster times, which is a blessing (although please read it, it’s worth taking some time with). Being a QWOPlike, there should also be a slapstick component, and Human Simulator doesn’t disappoint on this front either — Hugh’s awkwardly floaty head that spins wildly given any excuse, and the intensely jarring running animation near the game’s climax both got a chuckle out of me. It’s the sort of thing you could easily imagine being streamed. Look, none of this is complex or witty; it’s unabashedly silly, so if you’re looking for comedy for the intelligentsia definitely look elsewhere, but I found it to be pretty timeless, inoffensive fun. 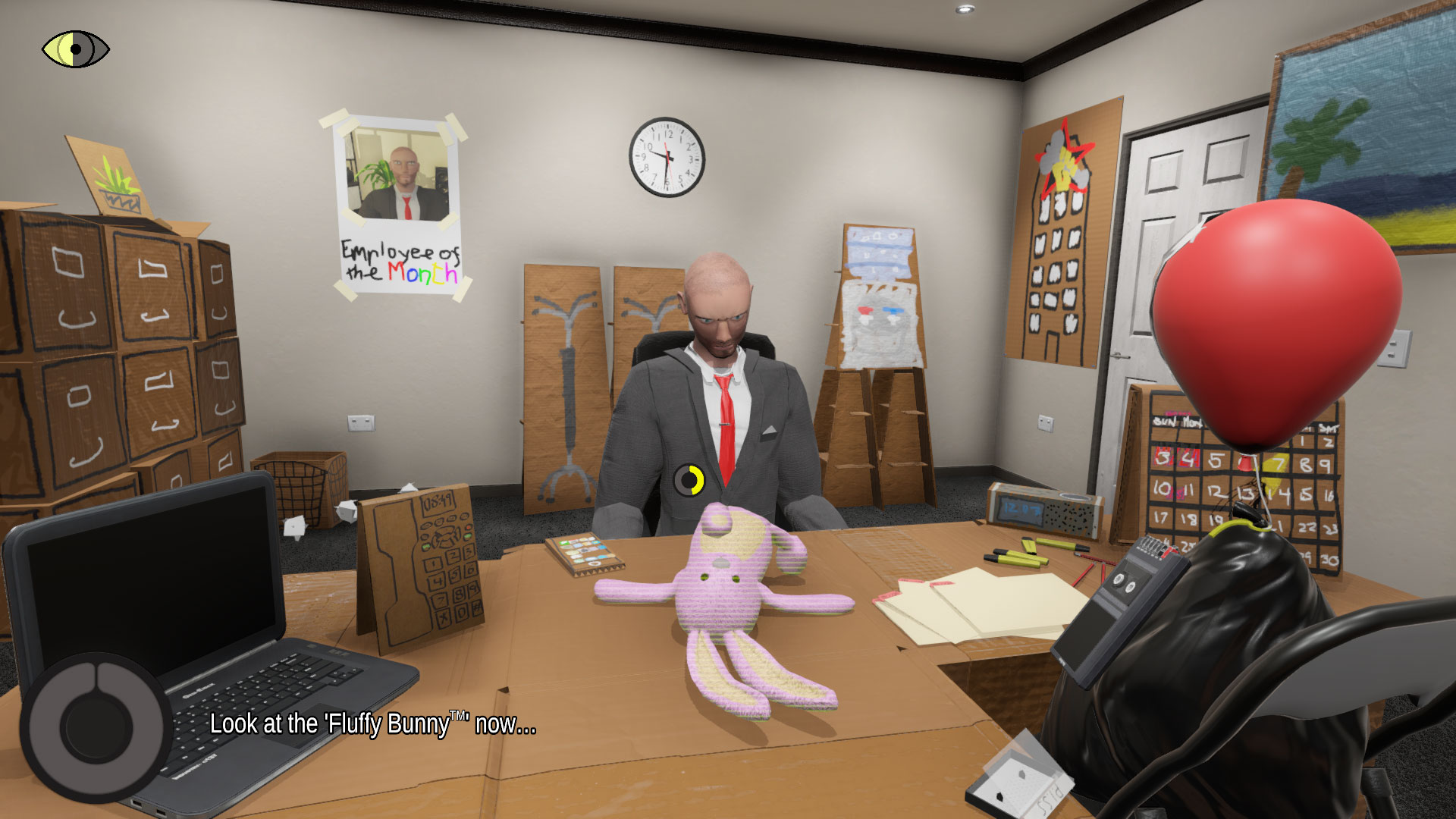 I’ve been fairly light on the criticism in this review, so let me bundle it in at the end here. If you’re not a completionist, you will have seen all Human Simulator has to offer in a pretty minimal amount of time. Lyre Lyre Studios has included a message in the credits mentioning that it’d like to make some DLC, which would definitely be appreciated, since if you’re not one for collecting achievements you’ll be done in one or two sittings. There are some sound missteps, with music being largely absent, and what music there is only just slotting into the “adequate” category. There’s just not much memorable or interesting in the sound design at all really, and it definitely hurts the overall atmosphere — funny writing delivered over bland background ambience just sucks some of the fun away. Games like Octodad and Untitled Goose Game have shown us just how a more tailored music experience can really add to some good slapstick, and it’s a shame that nothing really conjured that spirit here. None of that takes away from the fact that this is a solid debut for Lyre Lyre Studios, and a decent entry into the “QWOPlike” genre that I’ve just coined.

Human Simulator is some good, clean fun. It’s not the pinnacle of its genre, and it doesn’t do anything very unfamiliar, but it’s entertaining and I’d be surprised if it doesn’t elicit at least a few laughs. This is definitely worth a shot if you’ve got some Steam credit and a few hours to kill.