Who wouldn’t play a samurai movie?

Believe it or not, Star Wars, A Fistful of Dollars and Ghost of Tsushima — three experiences in completely different genres, let alone media — have something in common: they’re all inspired by the work of Japanese film director Akira Kurosawa. His Samurai Cinema has been changing film since Seven Samurai in 1954, and with Ghost of Tsushima’s release back in July, his impact has made its way to video games. Developer Sucker Punch Productions has even gone so far as to admit that it wasn’t as concerned with historical accuracy as it was with making the team’s favourite films playable; it’s a true love letter to Kurosawa’s samurai flicks of old, and we’re here to see just how the studio pulled it off. 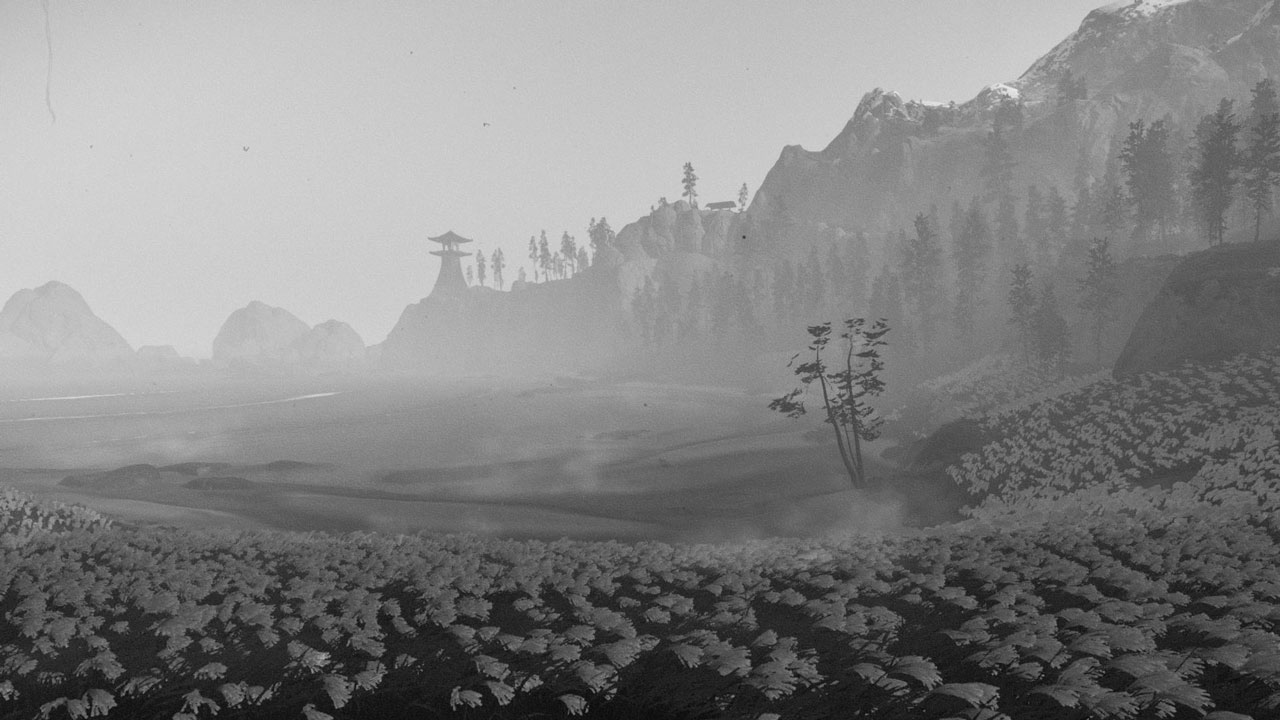 While the whole game oozes with Samurai Cinema’s influence, nothing is more on-the-nose than Ghost of Tsushima’s “Kurosawa Mode.” Named after Kurosawa himself, the filter takes direct inspiration from the man’s most famous films. It transforms the game’s cavalcade of colour to a grainy, black and white samurai flick from 70 years ago. The mode also sees some-time appropriate audio adjustments. Creative Director Jason O’Connell told Entertainment Weekly that Sucker Punch tweaked the game’s audio so that it “mimicked sounds of old TV and, specifically, megaphones, radios, TVs back to the ’50s.” Add a splash of Japanese voice acting and you’ve got yourself some samurai cinema over half a century old, all with the blessing of Kurosawa’s estate. Very nice. 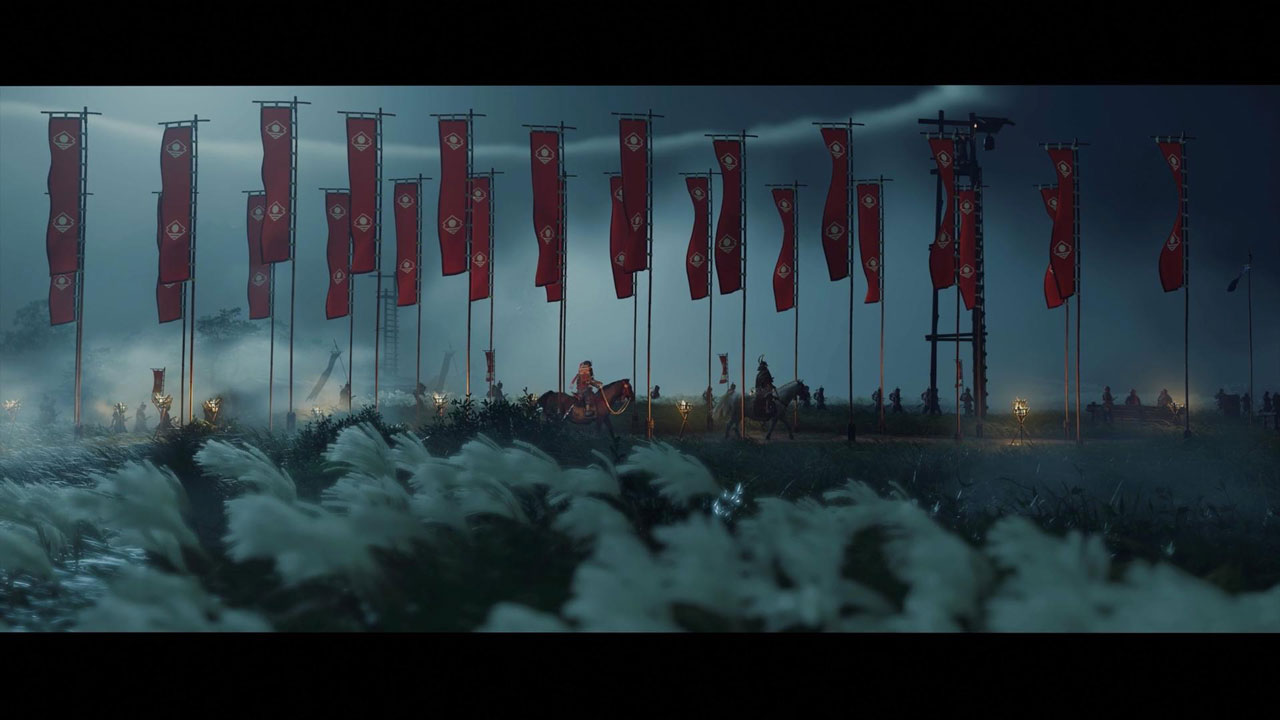 Not all of Kurosawa’s movies were black and white; many of his seminal works came half-way through last century, his 1985 coloured epic Ran has had a clear effect on Ghost of Tsushima’s visual design. Beautifully bright and brilliantly contrasted, Ran distinguishes factions from one another using bold choices in colour; people are represented by costumes and sets of unyielding yellows or blissful blues, with aggressively red armies rushing by Japan’s greenery. It’s a style of storytelling where something as simple as shade holds a deeper meaning. Ran is genuinely too beautiful to describe in words — you’ve got to see it to believe it — but Ghost of Tsushima’s colour palette and the way Sucker Punch implements it are an excellent homage.

When the game opens, samurai wait to face the Mongol armies. With bright red banners (like the ones in Ran) filling the night sky, it is a showing of courage in the darkness of certain defeat. It’s proud, aggressive and brash all at once. Those are the points that drive Jin from the samurai code, and they’re colour-coded in red. By the same token, Masako Adachi is the lone survivor of the Adachi Clan, a once-proud family of samurai slaughtered by Mongol’s and Traitors. She is a tragic character who has been stripped of honour, and Sucker Punch hammers that point home in her design: her outfit is missing most of the gold that once proudly trimmed the Adachi armour, instead favouring and accentuating a deep blue that represents the sadness that she carries throughout the game.

I could gush about how well Sucker Punch used colour in Ghost of Tsushima forever; I could talk about how it adorned the naïve Yuka in yellow, or how Jin gives up his honour the second he gives up his colour by donning the Ghost Armour… but then we’d be here all day. To put it simply, a masterpiece inspired a masterpiece. Thank you, Ran. 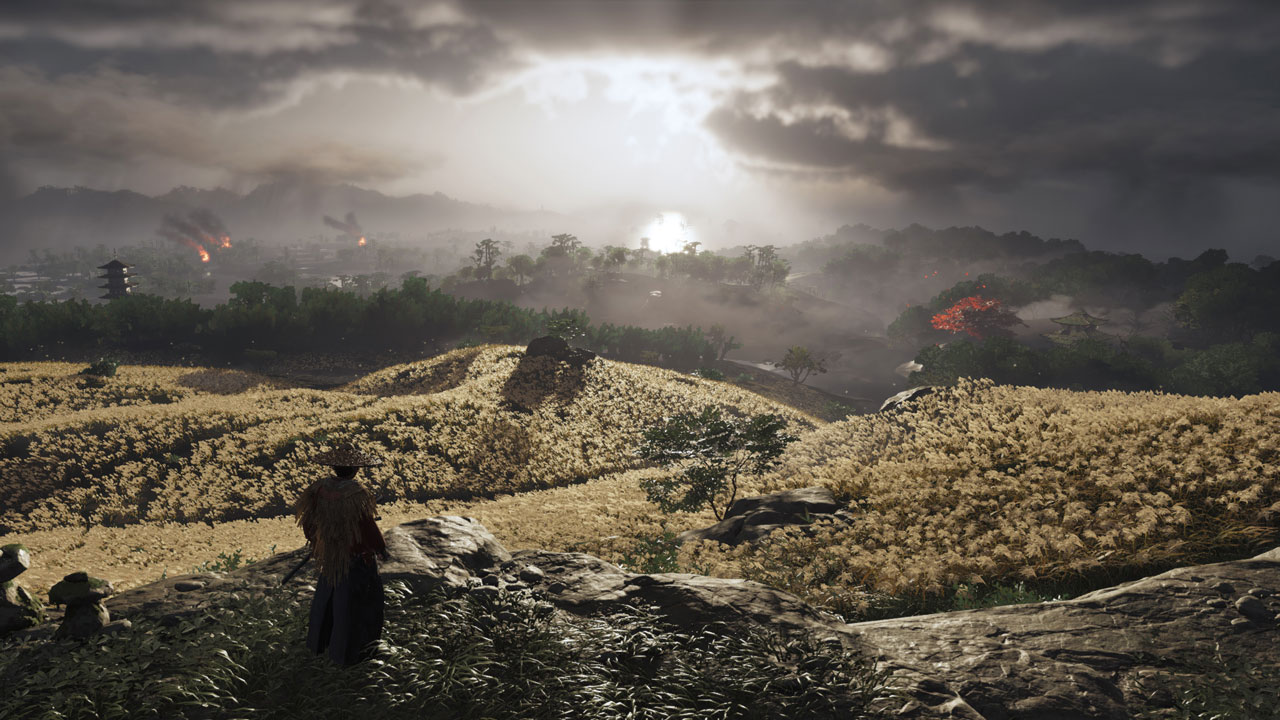 The weather is as important as the combat or visuals in Ghost of Tsushima, and it owes it all to Samurai Cinema.

Akira Kurosawa was a master when it came to using weather to tell a story. Throne of Blood’s fog is a good example. It used the mist to represent the complexity of its main character and his inability to comprehend the forces controlling his fate. Similarly, Seven Samurai’s final battle is drenched in torrential rain, a visual metaphor adding to the utter chaos and desperation of the character’s last stand. These are techniques Kurosawa used to make the character’s emotions and needs tangible, and they are all over Ghost of Tsushima.

Like Kurosawa, Sucker Punch makes weather a key factor in its storytelling. As you progress, you’re given more opportunities to stray from the life of a Samurai, using stealth and underhanded tactics against the Mongols. Indulge, and the weather will change. Storms will become more frequent, a reflection of the protagonist’s separation from his honourable path. It is a subtle yet effective representation of Jin’s journey.

While Sucker Punch used the weather to weave its story, it also used Kurosawa’s influence to truly innovate gaming. “Guiding Wind” serves as a map marker in Ghost of Tsushima — you can just swipe the DualShock 4’s touchpad and watch a gale blow towards where you need to be. Not only is it pretty, but it fixes an age-old problem with gaming. Before, games forced players to stare at maps or golden trails to find their way. It was functional, but it drew away your eye; you missed out on the world; an issue Ghost of Tsushima fixes by making the marker all-encompassing. Wind blows between the reeds and over the mountains, filling the entire screen. There are no more bread-crumb trails to distract you, because the mechanic works alongside the environment instead of in spite of it. It is a true innovation in gaming, and we owe it all to Samurai Cinema. 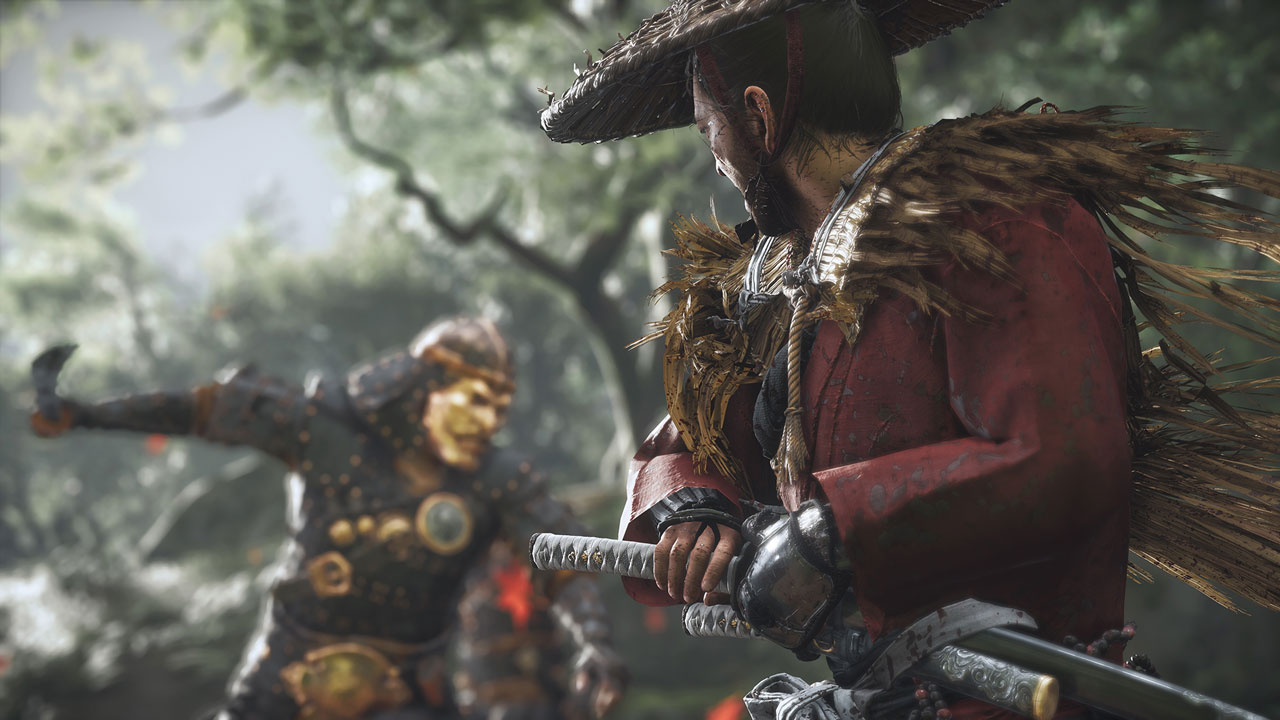 The stand-off mode in Ghost of Tsushima is an excellent addition. It has Jin calling out to his enemies, challenging them head-on. You’ll then stare an opponent down, waiting to react to their first move. If you get it right, you’ll cut them down in a single strike; time will slow down, blood will spurt everywhere and, if you’ve got the upgrades, you can chain it multiple times. It’s a satisfying and cinematic way to begin combat, but one man cutting down three or four enemies in sequence is something rarely found in real life — only in video games, and the things that inspired them.

I’m sure this feature has more than just a few influences, but I’m going to nail it down to two films. Knowing Sucker Punch’s reverence for Kurosawa, it makes sense his style would be all over the mechanic; in an interview with Entertainment Weekly, creative director Nate Fox made it perfectly clear that Sanjuro’s ending had a major impact on the feature, explaining: “the tension that those two warriors have, they wait for the other to make a first move and then one of them dies with just one stroke of his sword. We tried to translate that into the standoff in our game very directly.

Although Sanjuro’s tone is alive and well in the stand-off feature, the actual mechanics of it are better exemplified in Seven Samurai; the sparring scene in particular looks like it’s an early prototype. In it, Kyūzō spars with an unnamed warrior, relying on superior technique and patience to win. His opponent, thinking it was a draw, challenges him again with a real sword. It ends how you think and, in a way, strikingly like the game. Where Sanjuro captured the mode’s tension, Seven Samurai’s scene gives a much more readable tell, something players require in a mechanic. Either way, both are integral to getting stand-offs to work, and it is all thanks to Akira Kurosawa.

Kunai, Fear and the Ghost Stance 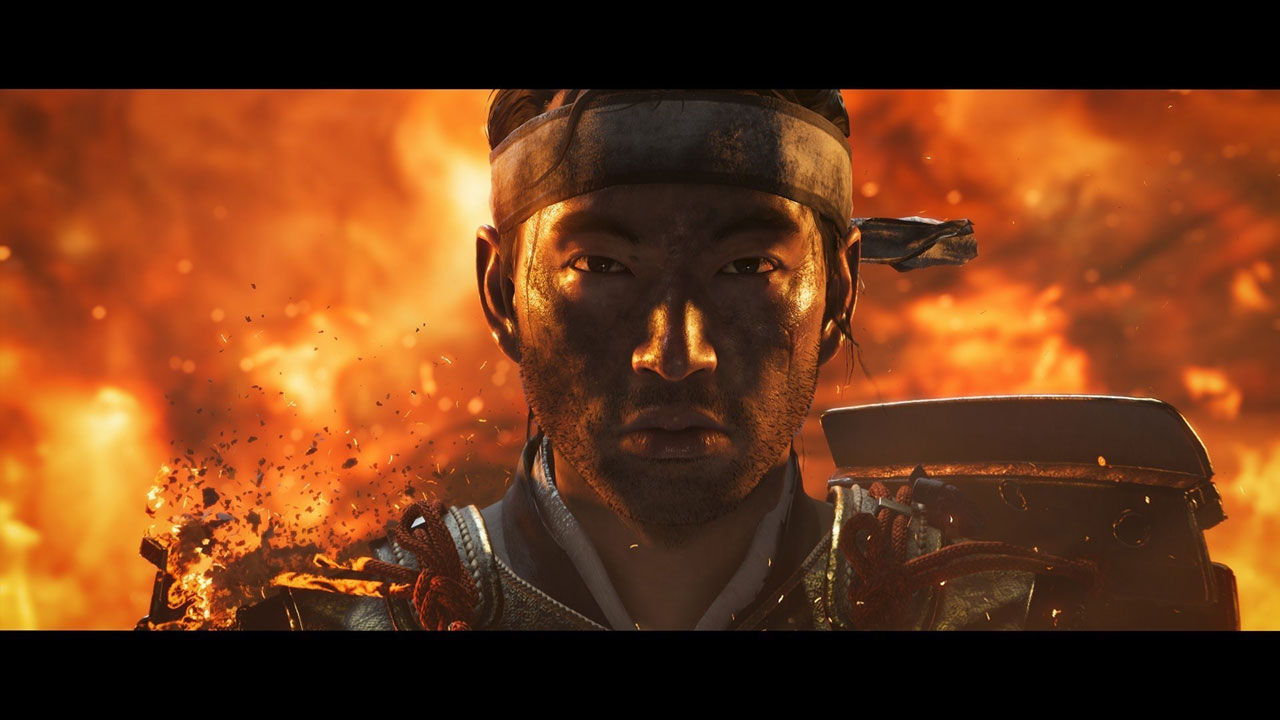 Like Ghost of Tsushima, Kurosawa’s Yojimbo and its sequel Sanjuro feature a lead who is a true force of nature. He is a master samurai dealing in death; a warrior so effective, Yojimbo literally revolves around two competing factions buying his loyalty. Just watch the 24 magical seconds it takes Yojimbo’s lead to kick ass. In less than half a minute, a kunai is thrown, nine men are dead, and one is left cowering in fear. It’s a true display of the slick style of the samurai, and it’s a scene eerily similar to the game’s combat.

Pretty much all the events of the scene link in with Ghost of Tsushima’s mechanics. Yojimbo’s lead, Kuwabatake Sanjuro, uses his kunai to shut down a ranged enemy, leaving him dazed and confused; in Ghost of Tsushima, you use your kunai as a tool to stun enemies and help against archers, but that’s not where the similarities end. When Sanjuro leaves a mountain of corpses in his wake without incurring any harm himself, the lone survivor falls on his butt and begins to back away; in Ghost of Tsushima, if you kill enough enemies in one sequence, the survivors will run off scared after falling flat on their butts. Finally, there’s the game’s “ghost stance”, wherein consecutive kills fill a meter that causes enemies to freeze in fear, giving you a free one-shot and making you feel like an unstoppable killing machine. It’s… exactly like the Yojimbo scene, and it even turns the screen black and white, as if Sucker Punch has taken a moment to turn the game into the movie that inspired it! There are just too many similarities for this not to be an homage, and in 24 seconds we see just how important Kurosawa’s work was in inspiring Ghost of Tsushima’s gameplay mechanics.

All in all, it’s plain to see that Akira Kurosawa’s beloved Samurai Cinema runs deep in Ghost of Tsushima’s visual DNA, whether it’s in its on-the-nose “Kurosawa Mode” or the colours that call Ran to mind. What’s more impressive, however, is Kurosawa’s influence on Ghost of Tsushima’s gameplay: the “Guiding Wind” mechanic pays homage to Seven Samurai while also providing an elegant, innovative solution to an issue that has plagued the industry since the birth of 3D gaming, and films like Yojimbo and Sanjuro have informed some of the game’s most intriguing combat features. Ghost of Tsushima makes Sucker Punch’s love of Samurai Cinema clearly apparent in every facet — all that’s left to say is thank you. Thank you to Sucker Punch Productions, and thank you to the legendary Kurosawa.

[…] For his Doublejump Debut, Liam Mallia combined two of his favourite things, video games and Akira Kurosawa’s Samurai Cinema, in an analysis of the latter’s incredible impact on Ghost of Tsushima.  […]

[…] and enjoyable story. It’s a game that so clearly wears its influences on its sleeve, from Akira Kurosawa to Assassin’s Creed. Funnily enough, it also addresses some of the issues myself and many […]

[…] to Yomi is a black-and-white cinematic action-adventure side scroller inspired by Japanese samurai films of the 1950s and 1960s like the works of Akira Kurosawa. Its striking first trailer showcases the game’s lifelike visuals and picture-perfect film grain, […]