If Mortal Kombat was a faithful film adaptation that was accurate to the games without overdoing it, its 1997 sequel Mortal Kombat: Annihilation is full-on fan service.

Even as someone who’s only familiar with the series through the reboot entries and dumb jokes made about the old ones, Annihilation is relentless in pulling whatever it can from the games themselves. It’s a cynical 90-minute commercial built for younger fans and whoever else didn’t know any better, “dazzling” these tragic youths with all the low-effort cosplay they could afford.

If you watched the movie either in 1997 or more recently – for whatever reason – hoping to see Shao Kahn, Motaro, Sheeva, Cyrax, Nightwolf on the big screen, you won’t be disappointed: Annihilation meets those expectations… and absolutely nothing else. 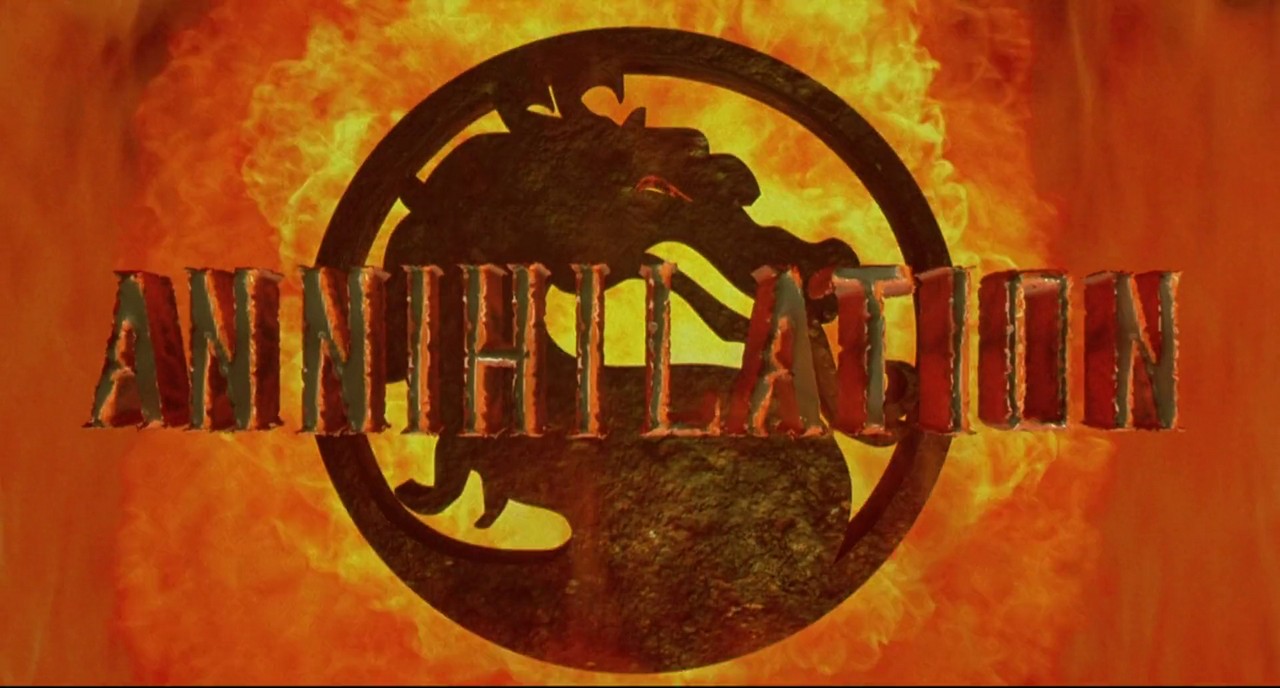 Mortal Kombat: Annihilation starts right as the first movie ends, as Liu Kang, Kitana, Sonya, Johnny Cage and Raiden (the latter three having been recast, just to add to the greatness) arrive at Liu Kang’s temple. Suddenly, Shao Kahn arrives! Ninjas cartwheel into frame! Shao Kahn kills Johnny Cage! The heroes escape! From there, the remaining good guys walk around a number of sets looking for help, or strength, or something. Meanwhile, Shao Kahn desperately tries to impress his Dad Shinnok.

It doesn’t even have the luxury of the original movie’s tournament setup; it simply continues like the next episode in a television show by adding a mostly-unseen apocalypse and some new ninja colours to the mix. Eventually it ends and the credits start rolling.

At least there’s more fighting this time – and Christ do I wish this was a good thing.

Every fight in Annihilation plays out the exact same way. They’re slow, poorly shot and poorly edited scenes with Power Rangers-esque choreography, and they just never stop. One ends and another starts up right away. You’re bored by the third and it’s only been ten minutes. The reaction shot gets a lot of love in Annihilation, too, because nothing’s more exciting than cutting to a dead-faced spectator, offering nothing but a dim stare.

Much like swallowing a handful of horse tranquilizers, Annihilation isn’t nearly as fun as it should be. It’s just a deluge of mind-numbing motion and vague mental anguish. 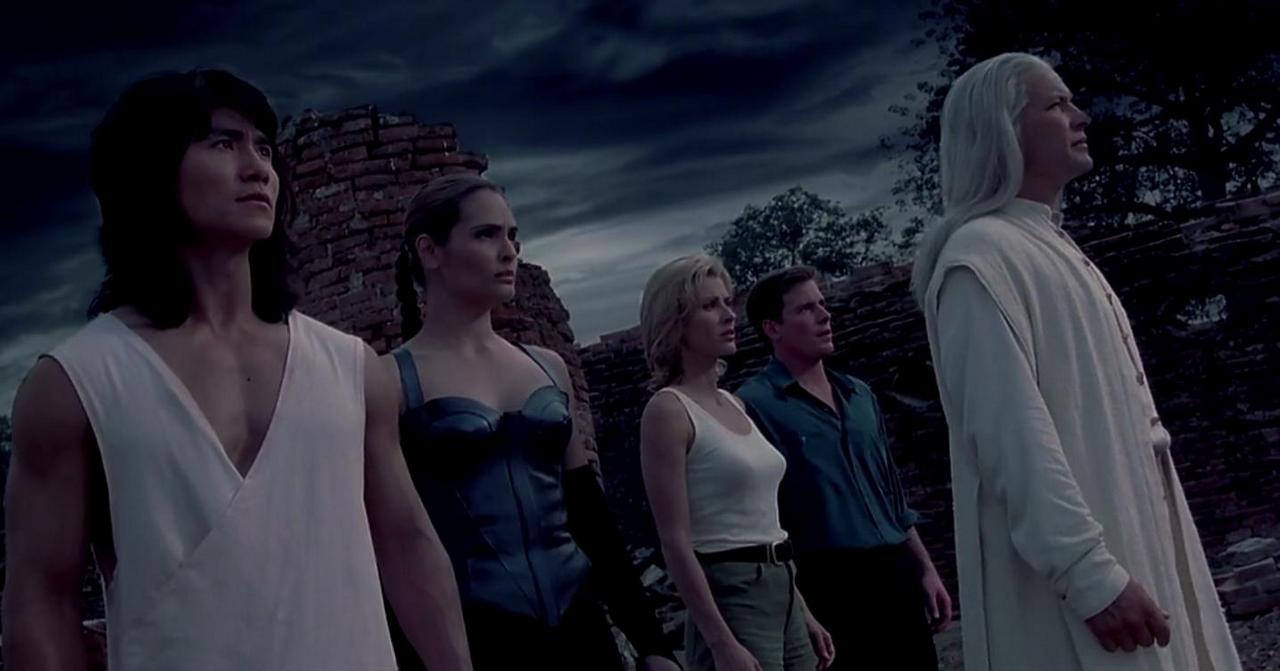 Surprisingly, compared to the original movie, Annihilation manages to be far more faithful to the games themselves, and it isn’t just in the aforementioned “cram every character we can into the movie” sort of way, but in its story and plotting as well. There’s a handful of mundane conversations, more backflips than spoken words and characters jogging to their next scheduled fight. It can barely wait two minutes before unleashing a new wave of pathetic kicks, blocks and flips on the poor, helpless audience.

It’s like an arcade ladder turned into a script.

This is even more true when it’s compared to the recent NetherRealm entries. Mortal Kombat 9, Mortal Kombat X and the upcoming Mortal Kombat 11‘s narratives unfold in between pre-determined fights against AI-controlled opponents, where characters walk from one fight scene to the next – which usually means just loading up different fighting game arenas. NetherRealm Games pulls this off with aplomb but as a movie, Annihilation just falls apart.

On the flipside, where the original Mortal Kombat movie made a few smart, lasting changes that eventually made their way into the mainline games, every tweak Annihilation makes to the series canon is absolutely for the worse. This is mostly to do with how very terrible Annihilation’s version of Shao Kahn is (see: Exhibit A). In the games, Shao Kahn is a uniquely scary villain with an otherwise straightforward concept (at least going off his showing in MK9). When the cast of every entry is a paint palette of ninjas and a handful of Z-tier supervillains, the Biggest Bad being a typical warlord with a normal-sized warhammer makes for an oddly effective contrast.

In Annihilation, though, Shao Kahn (played by Brian Thompson) is as incredibly lame as everything else in the film. The only thing the filmmakers almost got right is getting a buff dude to play him, and they even screwed that part up.

First off, his appearance is an abject failure. They got the buff part right, so kudos to you Mortal Kombat: Annihilation, but his bone-filled medieval outfit looks two sizes too big. It makes him either look too young, like he’s trying out mum’s armour while she’s out at the shops, or too old with a shrunken body, like he’s too proud to get a new outfit sized up.

I guess the filmmakers noticed this, too, because he’s barely ever in the outfit. Every other scene has him in what looks like a breezy silk Gi, proudly showing off his bowling ball of a head. For most of the movie, Shao Kahn is just a dude. It’s like they gave up and told Brian Thompson to wear the curtains from his trailer instead. 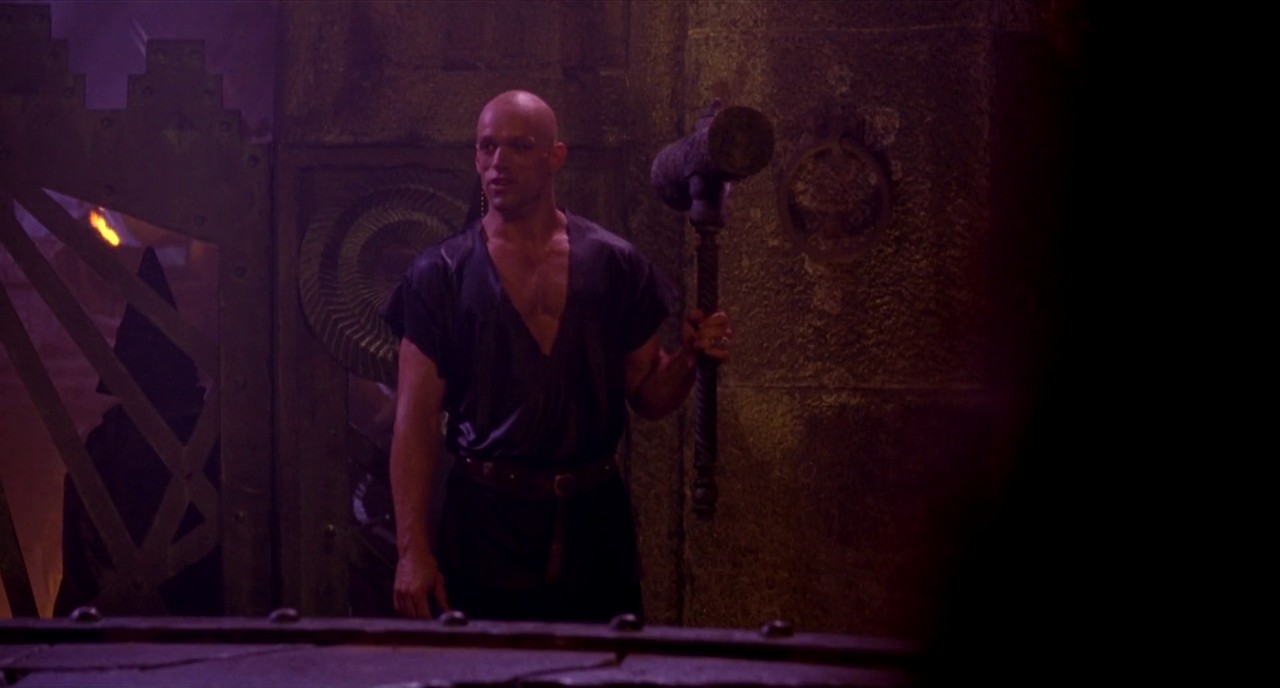 The film could have redeemed itself by capturing the utter terror that is Shao Kahn’s personality, but it didn’t. In fact, it went the complete other direction: it saps away whatever intimidation he had left and turns him into a desperate child eager for his father’s attention. It doubles down on the costume failure to make him a pathetic lackey without any agency or motivation of his own besides making his Elder God dad Shinnok happy (which, along with being Raiden’s brother, is another major change to the established canon).

To continue this bizarre new backstory, Shao Kahn’s daughter Kitana, as established in the first film, is over 10,000 years old. This would mean that Shao Kahn has to be at least 10,000 years old as well, but they still went and made the scary demon emperor a needy daddy’s boy. He can’t be both a 10,000-year-old emperor of Hell and a wide-eyed child excited to see his father, can he?

Alongside an almost-appropriate booming voice, Annihilation’s Shao Kahn is completely absurd – which also sums up the rest of the movie, pretty much. 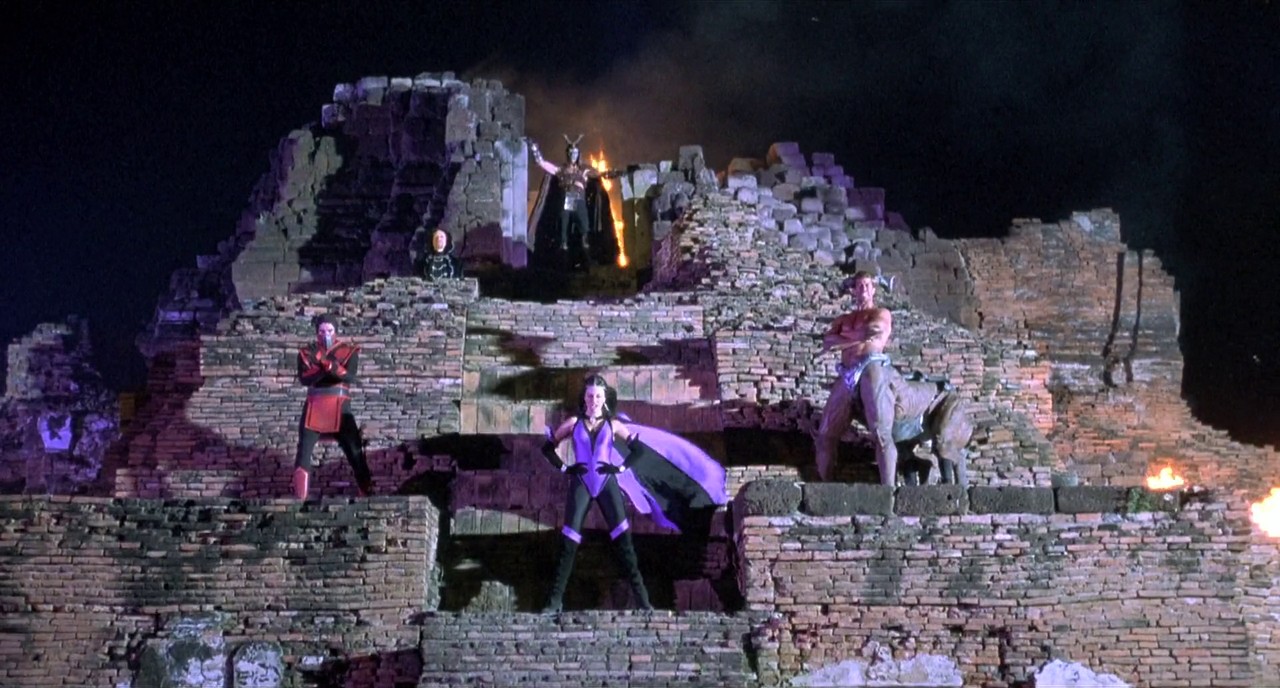 A relic of a worse time

The original Mortal Kombat is curious for how much it gets ‘right’ and how it connects to recent entries in the series, but Annihilation is downright fascinating for how much it doesn’t.

Back in the day, Mortal Kombat was a fundamentally exploitative franchise in the same way those 17 Sharknado movies are. They were fun, relatively basic games with a very effective hook of gore and exciting fatalities. At least after a point, the series dropped any focus on the hardcore community and aimed its sights squarely on the male teen demographic. They were exploitation media meant to appeal for reasons other than quality (though that doesn’t mean they weren’t good). It worked wonders and, despite some hiccups, it led to eight entries and a few spin-offs.

Then, NetherRealm rebooted the whole thing with Mortal Kombat (2011). It returned to the memorable jumble of Asian fantasy and Western sci-fi aesthetics, the core heroes of Liu Kang, Raiden, Sonya Blade and Johnny Cage, and to the original tournament. A big ol’ chunk of nostalgia. It didn’t overburden itself like previous games but made strong gameplay and shock value its two pillars. Followed up by Mortal Kombat X and Mortal Kombat 11, the series saw a major shift in tone, art direction and story quality and now places a genuine value on its hardcore community (though that’s not uncommon for the genre nowadays). 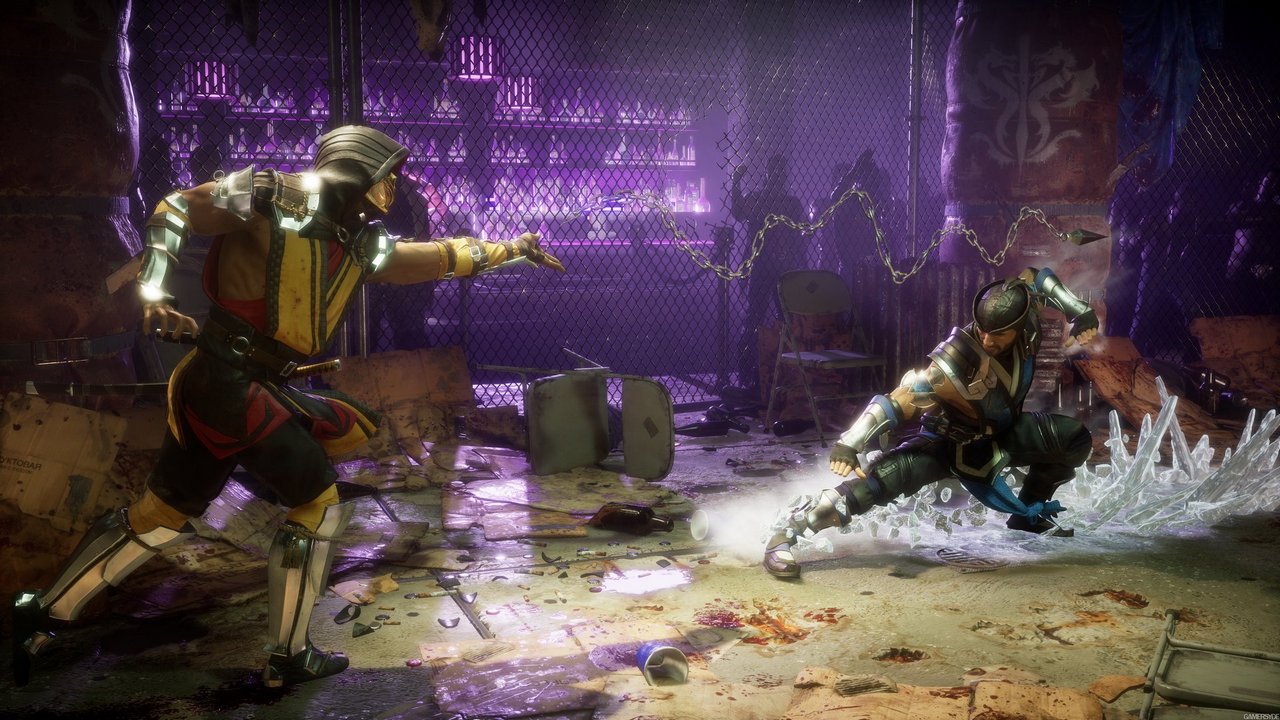 Look at the series now and it’s obvious how deeply rooted it is in the original movie and the first three games it represented. How tied up the series is in its icons and in the specific ways the movie defined them. MK11 leans even harder on Johnny Cage’s cocky Hollywood persona and even brings back actor Cary-Hiroyuki Tagawa to reprise the role of Shang Tsung, the game’s first DLC character and keeper of the in-game Krypt.

By contrast, Annihilation works best as a reminder of where the franchise was and how far it’s come in the twenty years since. It’s a remnant of when there was less interest in creating a lasting product but in creating something that would turn a profit. It’s a hollow, mindless flurry of 90s CGI and amateur kung fu that I had to shut off twice to get through. It’s a 94-minute action movie where the credits take up a whopping 11 minutes (I counted).

Mortal Kombat: Annihilation is a goofy little time capsule of an awkward, embarrassing adolescence. Meanwhile, MK11 is getting nostalgic as it hits maturity. What will the franchise look like in another two decades?

Thanks to those at the Mortal Kombat wiki!

[…] a Midway franchise like Mortal Kombat (it’s all connected!), Rampage is a series where you play monsters, destroy cities and not much else. You play out a […]

You got it all wrong.

MK Annihilation is one of the best movies of all time.