The movie was a stupid mess – but Mortal Kombat 11 might not exist without it.

There’s something oddly reassuring about Mortal Kombat 11. Beyond the irony, the fact that Mortal Kombat, a fighting game that stars gore as the main character, can explode onto the scene in 1992 and still be alive and popular although it’s the same blood-soaked game in 2019 says so much about the gaming medium as a whole, about its simultaneous growth and lack thereof in the almost 30 years since the original game released.

Sure, the series has had its numerous rough points, and it has sanded down the edges and grown in many ways – and I’m not ignoring all that – but Mortal Kombat 11 targets the exact same market it did back in the day. It’s the ultra-violent 2D fighter with cutting-edge visuals and the mix of edge and B-movie cheese that fans crave. Heck, even original series creator Ed Boon still leads the team at NetherRealm Studios. In essence, Mortal Kombat hasn’t changed.

On that note, let’s dive into the shrieking dumpster fire that is 1995’s Mortal Kombat. 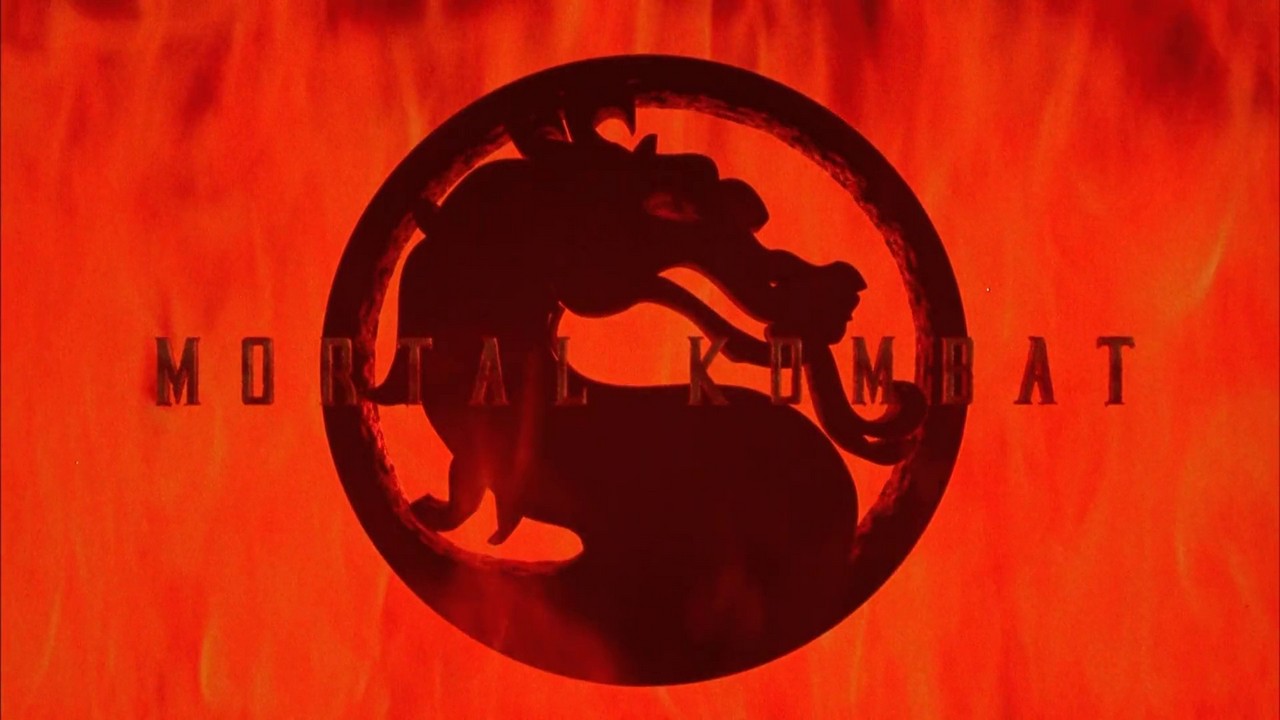 The motion picture adaptation was released right in the centre of Mortal Kombat‘s hype craze, just as the franchise was crystallising with the release of Mortal Kombat 3 (which ironically distanced itself from the iconic mystical elements and was considered a disappointment at the time).

Produced by New Line Cinema and directed by Paul WS Anderson, the director of all those Resident Evil movies that I’ll probably have to watch now and the upcoming Monster Hunter movie, Mortal Kombat is one of a handful of game adaptations that isn’t a total train wreck. It’s definitely bad – sometimes very bad – but there’s some good in there. A tiny bit.

It was pretty successful at the box office, too, earning about $122 million on a budget of $18 million. It fared worse with critics, though not as badly as it probably should have.

If you haven’t seen it before, Mortal Kombat is a stupid mess and I love it. It’s a “so bad it’s good” type of movie that somehow had the multi-million-dollar support of a major film studio. It’s packed with mind-numbingly bizarre decisions in every category: casting, dialogue, performances, choreography, camera work… it’s just weird from top to bottom. In the end, though, it’s all the better for it. Sure, they could’ve gone and made a good film, but what fun is that? This is Mortal Kombat, where they spell ‘combat’ incorrectly on purpose and bodies can contain several rib cages at once.

I’d already seen it but watching it again a few years later, it’s shocking how bad it is. It’s knowing and cheeky enough to get away with some of it, like Shang Tsung announcing “Fatality!” when he absorbs an unconscious man’s soul or Scorpion and Sub Zero suddenly showing up as zombie soldiers, but damn it’s terrible by today’s standards.

Whose decision was it to cast Highlander’s Christopher Lambert as Raiden and let him speak like he’d lined his throat with baking paper? How about to make Reptile a gross CGI lizard, or use a weird animatronic-puppet-costume for the four-armed monster Goro? I ask because I want to shake their hand and thank them for what they inflicted on the world. 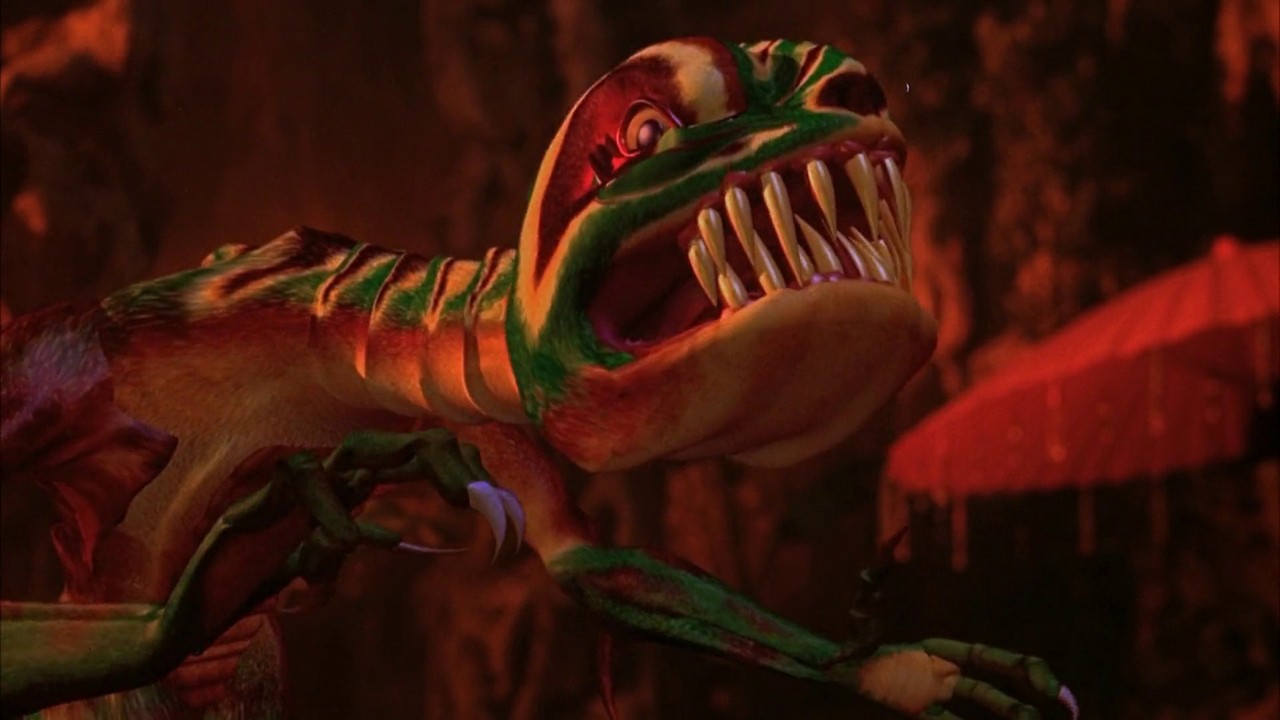 I also want to thank whoever’s responsible for the main theme that abruptly plays at least four times during the movie. Like the best theme songs, a man screams ‘MORTAL KOMBAT!!!’ numerous times during it and also it’s just house music. It perfectly captures the film’s many layers and themes.

The constant objectification of Sonya Blade got tired pretty quickly, though. Bridgette Wilson’s character has her own mission and motivation (which is refreshing for a movie produced in the 90s and based on an exploitative video game) but Johnny Cage, Kano and Shang Tsung can’t stop hitting on her. It’s especially creepy coming from Shang Tsung, the lecherous sorcerer and villain whose main goal seems to be Beauty and the Beast-ing Sonya by kidnapping her, dressing her in an ugly leather dress and waiting for her to fall in love with him (I think?).  It’s as bizarre as it is dated and gross.

Meanwhile, if you thought the martial arts action would be decent in a film based on a fighting game, you’d be wrong.

Only three of the 15 or so fight scenes could rank as even mediocre. The rest are terrible, boring and last less than a minute, with barely any actual fighting. The fight between Johnny Cage and Goro is made up of Cage dodging the giant animatronic puppet for half a minute before Goro tumbles off a cliff. Sonya versus Kano is a slow-motion amateur wrestling match up until Kano gets his neck snapped, because Sonya forgot she was a police officer who shouldn’t do that, I guess. Even the better ones, like Johnny Cage versus Scorpion or Liu Kang versus Reptile, are clumsy and poorly shot at best.

In the end, Mortal Kombat holds up as well as Mokap, Drahmin and Hsu Hao, but I didn’t watch it again to review it; I watched it again to see how it compared to the games it was based upon. 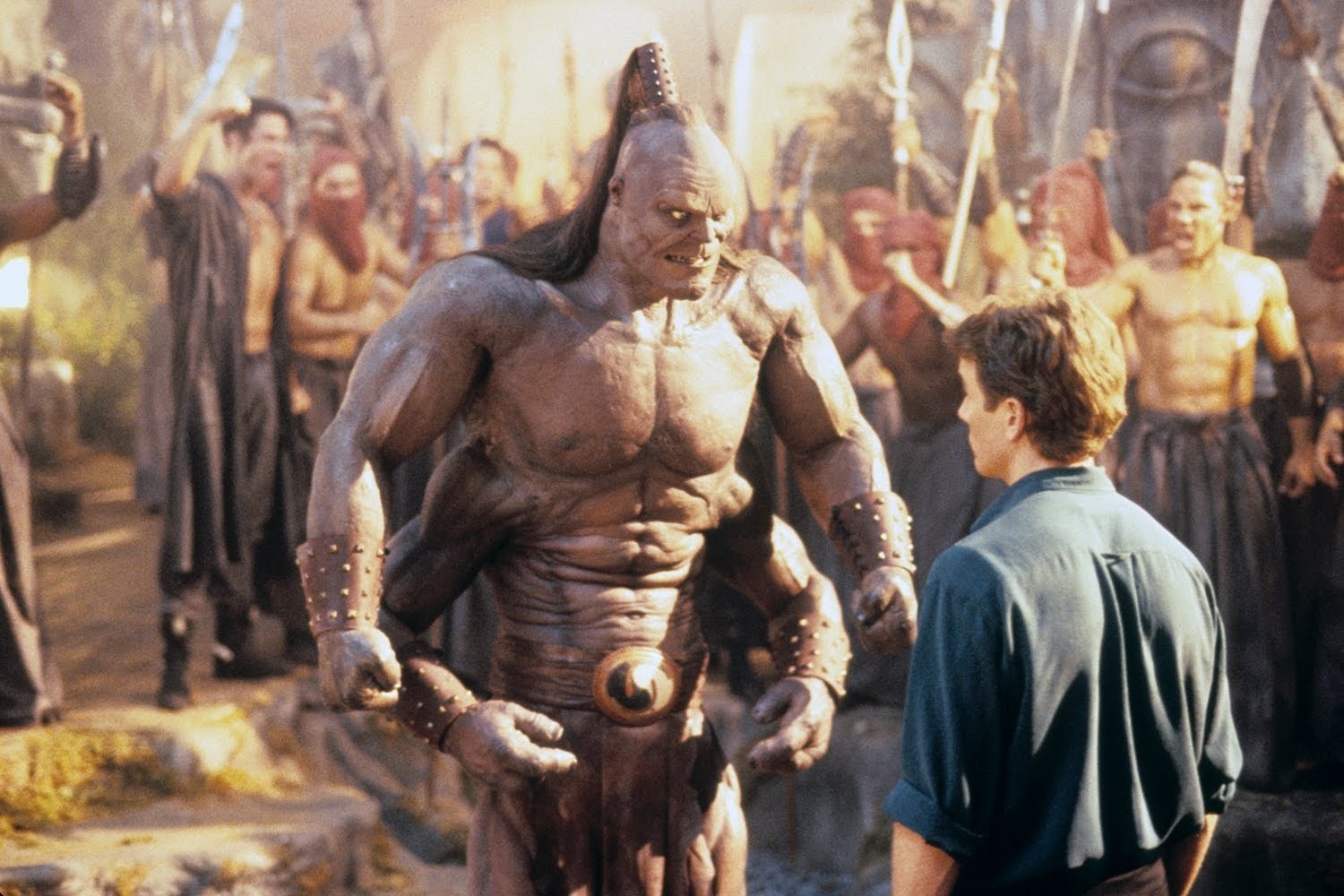 Mortal Kombat is very faithful to the first two games, and like most game-to-film adaptations, this is mostly for the worse.

Mortal Kombat is based on the 1992 original of the same name, with a few things taken from 1993’s Mortal Kombat II. The film keeps the tournament between Earthworld and Outworld intact, the sorcerer Shang Tsung as the villain, and the central cast of heroes. From Mortal Kombat II, it brings along an appearance of the realm of Outworld itself and a shot of iconic boss Shao Kahn, who ends up becoming the main villain of the (awful) sequel. It also took other bits and pieces – like Reptile turning invisible and Shang Tsung appearing young by stealing souls – from the second game.

However, its depiction of Goro can only be described as too accurate, and he might be my favourite thing about Mortal Kombat: a hulking animatronic puppet suit that looks like my claymation nightmares and moves like three kids stuffed inside a sunburnt, backbreakingly-heavy trench coat. Created by Tom Woodruff and Alec Gillis from Amalgamated Dynamics, Goro cost over $1 million and needed 13 to 16 puppeteers to individually control every part of him. Goro is remarkably faithful to the original games but, as much as I love that they built a gigantic puppet to play a four-armed monster, it’s hard to call this depiction of Goro ‘good’ when he has the elegance of a tireless tractor.

For all of Goro’s near-comical accuracy, Mortal Kombat could have been more accurate in the blood ‘n’ gore department, of which there’s almost none. It makes sense considering that the movie was aimed at kids and teens, hoping to sell more violent video games to their target audience (age ratings are messed up y’all), but it would’ve been a better film by default if someone exploded into a Kurosawa-esque fountain of blood or was comically sawed in half (is there any other way?). Without it, Mortal Kombat is a pretty limp effort.

The biggest and absolute best change, however, was channeling Schwarzenegger’s Commando and making the cyborg Kano into a dumb Aussie crime boss. Played by the late Trevor Goddard, whose Cockney English accent was mistaken as Australian, Midway brought this version of Kano into the main game series in 2000’s Mortal Kombat: Special Forces and he’s continued to appear this way ever since, including in next month’s Mortal Kombat 11. 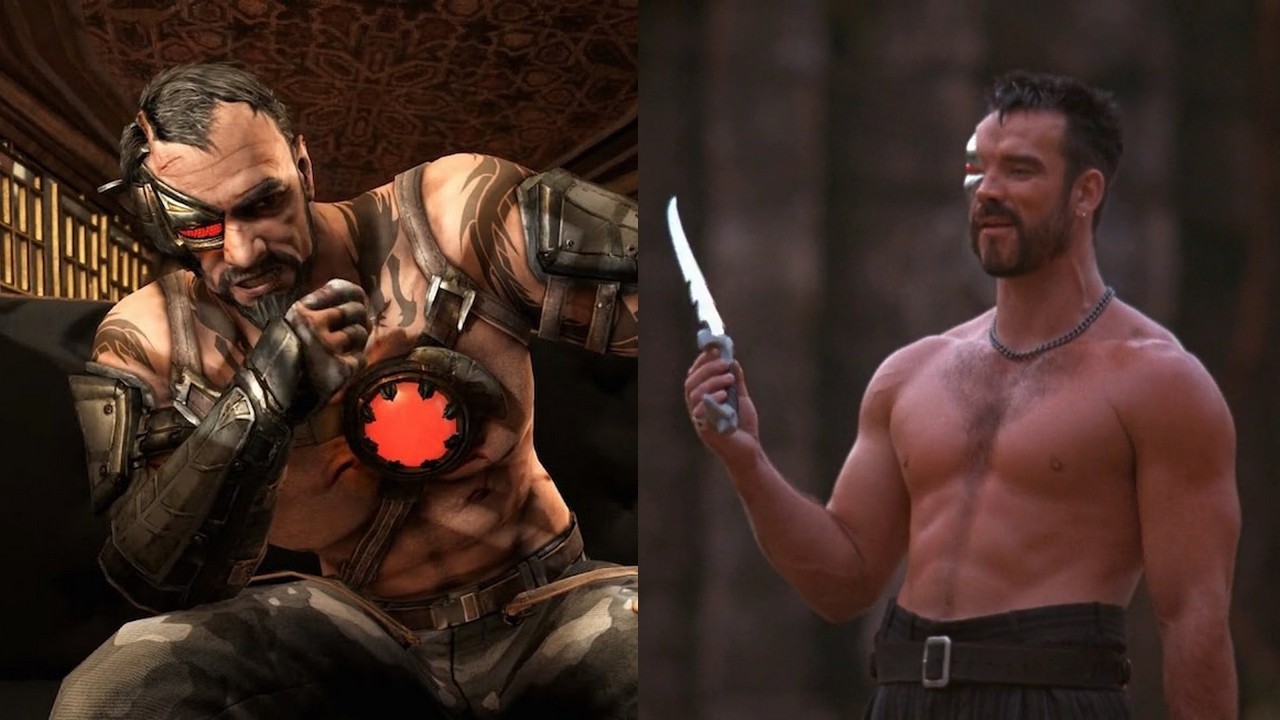 Aside from Aussie Kano, the film’s most lasting legacy was the massive influence it had on Mortal Kombat (2011) and its story mode.

Otherwise known as MK9, Mortal Kombat brought a cinematic eye to its single player mode and was the first of NetherRealm Studios’ filmic story campaigns. It was a smart, well-crafted ride that alternated characters every few matches with a real, actual story that retold the events of the first three games (now with time travel shenanigans). It also straight up lifts things from the 1995 film.

MK9 uses the same tournament premise – where Outworld must defeat Earthrealm ten times so they can invade; it gives Johnny Cage the same mission in proving that his fighting skills aren’t fake (though MK9 dialled up his ridiculousness a few dozen notches with ‘JOHNNY’ tattooed across his chest); it made Raiden Team Earthrealm’s coach and mentor; there’s a budding romance between Liu Kang and Kitana and between Johnny Cage and Sonya Blade (which led to the Kombat Kids in Mortal Kombat X and MK11); and Shang Tsung’s creep-ass leering over Sonya (which is… less good). 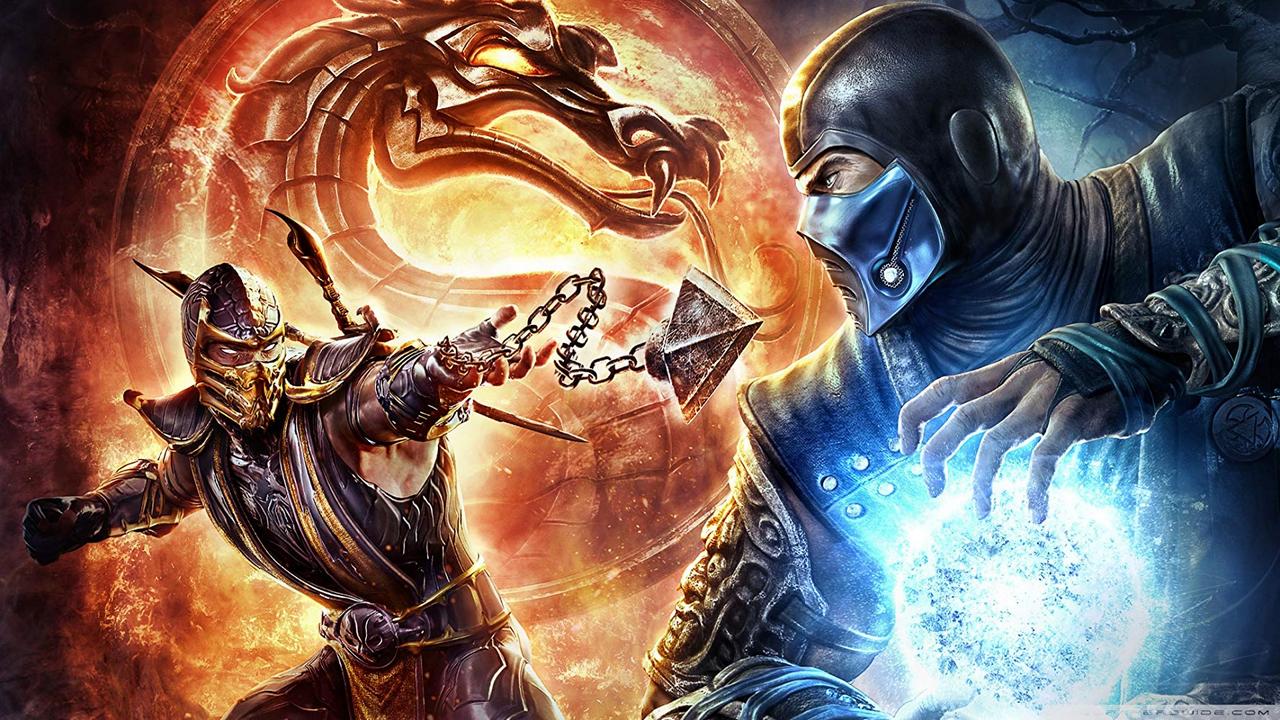 In a truly horrifying fashion, you can thank the bad film version of Mortal Kombat for reviving the series. It helped define the icons of the franchise and by doing so, gave NetherRealm a simple foundation upon which to reboot the series in 2011. I’ll admit that Mortal Kombat is one of those series that can never truly die because nothing fills the same gap in the market, but the story-heavy and FGC-centric version of Mortal Kombat we have today likely wouldn’t exist without this truly terrible film.

Was it worth the horrific pain I suffered by watching it again? Probably not, but it’s a solid consolation prize.

Thanks to those at the Mortal Kombat wiki!

[…] the first instalment of Press X to Adapt, John explores how the original Mortal Kombat movie gave the game series a shot in the arm story-wise that NetherRealm has capitalised on […]

Reply
Street Fighter: The Legend of How Hollywood Went Back to Finish Shadaloo for Good - Doublejump June 24, 2019 - 8:57 pm

[…] skills provide little to bounce off. His vibe of earnest blandness kind of worked for Liu Kang in Mortal Kombat, but as a sensei he makes Master Roshi look like R. Lee Ermey. He’s also way too young to play […]

[…] a lot of the camp that eventually sank the Hollywood versions (though I will forever throw down for that first movie), replacing it with a grittier, more grounded tone that seemed heavily inspired by Christopher […]