Galaxy Warfighter review — Not Quite Out of This World…

Early on in the experience, Galaxy Warfighter is a blast — both figuratively and literally. The latest in a long line of games from veteran Ukrainian studio Qplaze, Galaxy Warfighter is an arcade side-scrolling shoot-’em-up whose roots are firmly in classic games, and it almost does a good job of bringing that aesthetic to the modern market. Unfortunately, the game struggles to maintain the momentum it builds in those first few levels.

Individually, each element of Galaxy Warfighter is good: the sprites are all nicely detailed; the music adapts to the current state of play (a nice, relaxed vibe in the menu and intense when you’re in a stage); the upgrades available are all interesting and the boss battles are fun and engaging. The problem is that there simply aren’t enough of each of these elements to carry the game.

Yes, the sprites are all nicely done, but they weren’t distinct enough to differentiate between enemies. Yes, the music is great, but there are only two tracks — that’s one menu theme, and one battle theme that plays over every single one of the game’s 100 stages. Yes, the boss battles are fun, but there are only four of them. Qplaze did the bare minimum here, and as such has wasted Galaxy Warfighter’s potential. 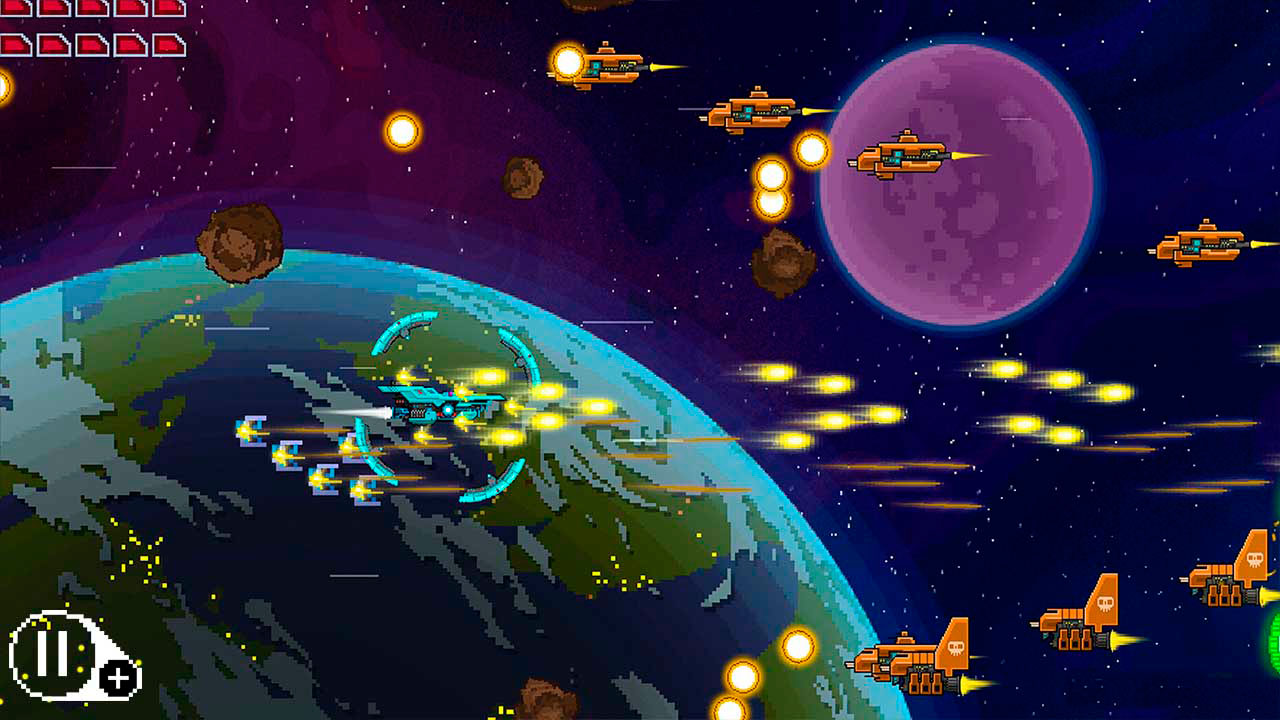 I quite enjoyed Galaxy Warfighter’s upgrade system, but even that feels drastically underutilised, especially when compared to both modern and classic games in the same genre. You can use the coins you collect from destroyed enemies to purchase upgrades for your ship, ranging from extra health to a time-stop that temporarily freezes everything on the screen. Those upgrades were certainly cool, but they didn’t change my game plan too much at all — except for the time-stop; that served only to trivialise the game’s boss battles.

You can also upgrade your ship’s weapons, but you don’t get different types of shots. I was expecting to be able to unlock things like the spread shot, the more powerful focused shot, the homing shot or even the extra turret that you find in other space-based shoot-’em-ups… Anything different at all, really. Instead, upgrading your guns simply increases their raw damage. No more, no less — the bare minimum strikes again. 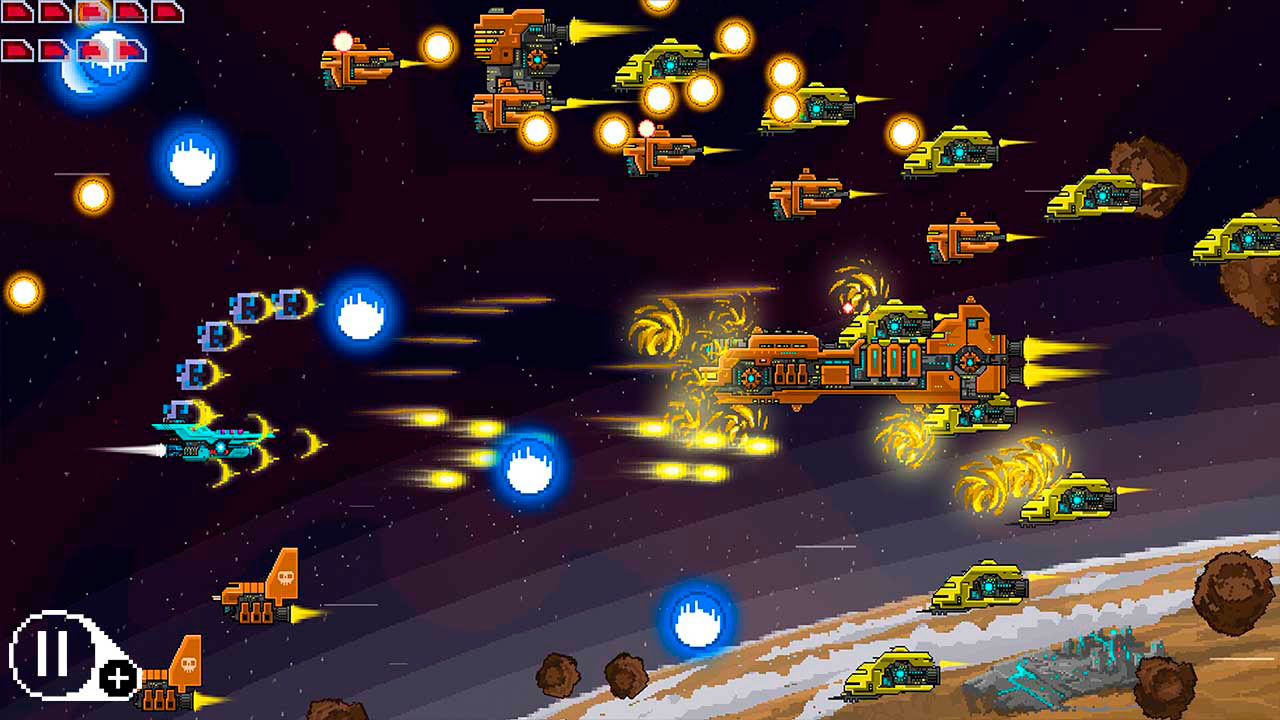 Since Galaxy Warfighter has so few elements and such simple gameplay, it has no business being 100 stages long. The battle theme is good, but I got over it by the tenth stage because it’s the only battle theme; combine that with how infrequently the game introduces new types of enemies to battle, and you’ll find that a lot of its stages feel identical.

That repetition is amplified in the boss battles. The first four stages all had unique boss battles, and they were good, but those bosses were the only four in the whole game. I believe that their health pools increase each time you face them, but I can’t tell if that was actually the case or they were just getting more and more boring. Besides, once you’ve got the aforementioned time-stop ability, you’ll kill most of the bosses before time starts back up again anyway. 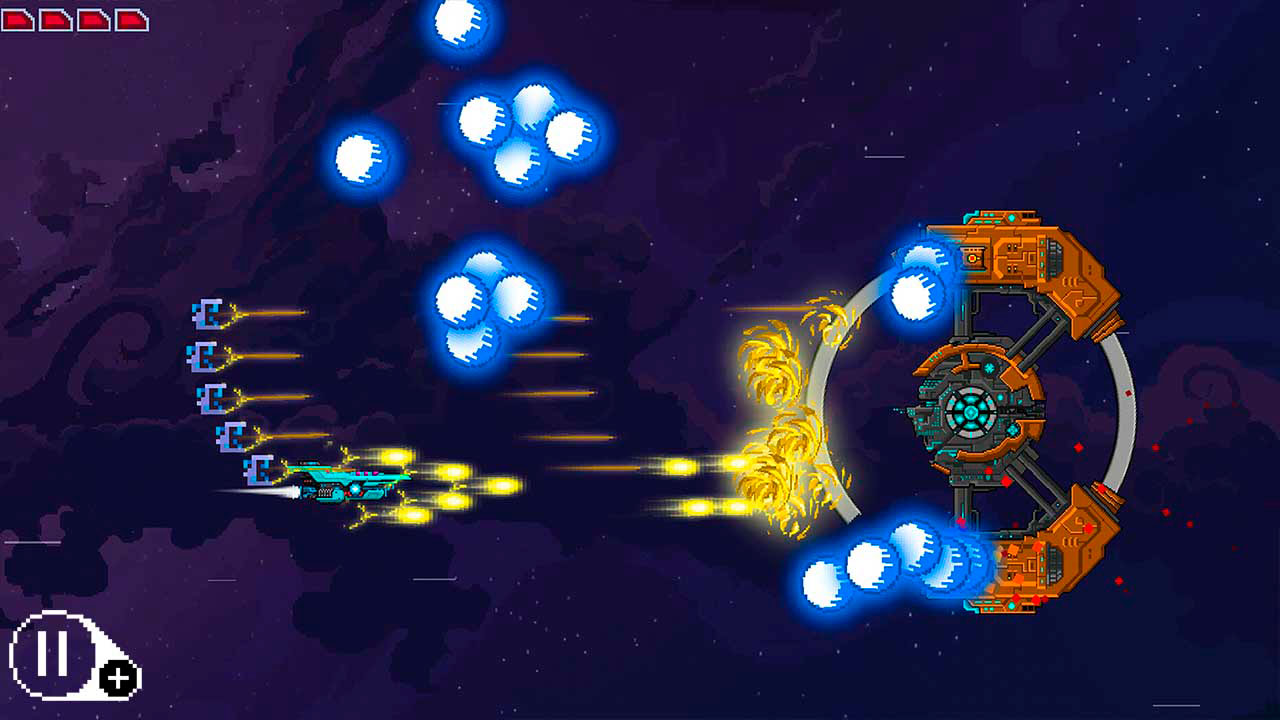 It took until 70 missions in before I felt like Galaxy Warfighter actively challenged me, and by that point, I simply didn’t care enough. Nothing had really been able to hook me in and keep me interested aside from my desire to finish it before I wrote this review. With that in mind, I persevered, and I was extremely disappointed to find that completing that final mission rewards you with absolutely nothing. No fanfare, no New Game Plus mode, no new ships, no nothing. You can replay that final mission over and over, collecting coins for all of the upgrades, but there’s no real point in doing that since you’ve already beaten everything the game’s got to offer.

Galaxy Warfighter started off with such potential, promising intense space battles, ruthless bosses and challenging missions. Unfortunately, fell quite a way short of fulfilling those promises.

For the most part, Galaxy Warfighter’s repetition left me on autopilot. Although nothing about it was actively bad, nothing stood out either; it’s a game that lacks identity and tries to carry itself for far too many stages. It’s a perfectly fine game, but there are plenty of more interesting games in the genre.