Why was Ridge Racer the king of next-gen?

Namco’s Ridge Racer series has a real knack for launching alongside new consoles. Of the 22 games in the series – some of them being ports or updates of other entries – eight were also launch titles, so we’re here to investigate exactly what makes this iconic arcade racer so well-suited to the next-generation transition. 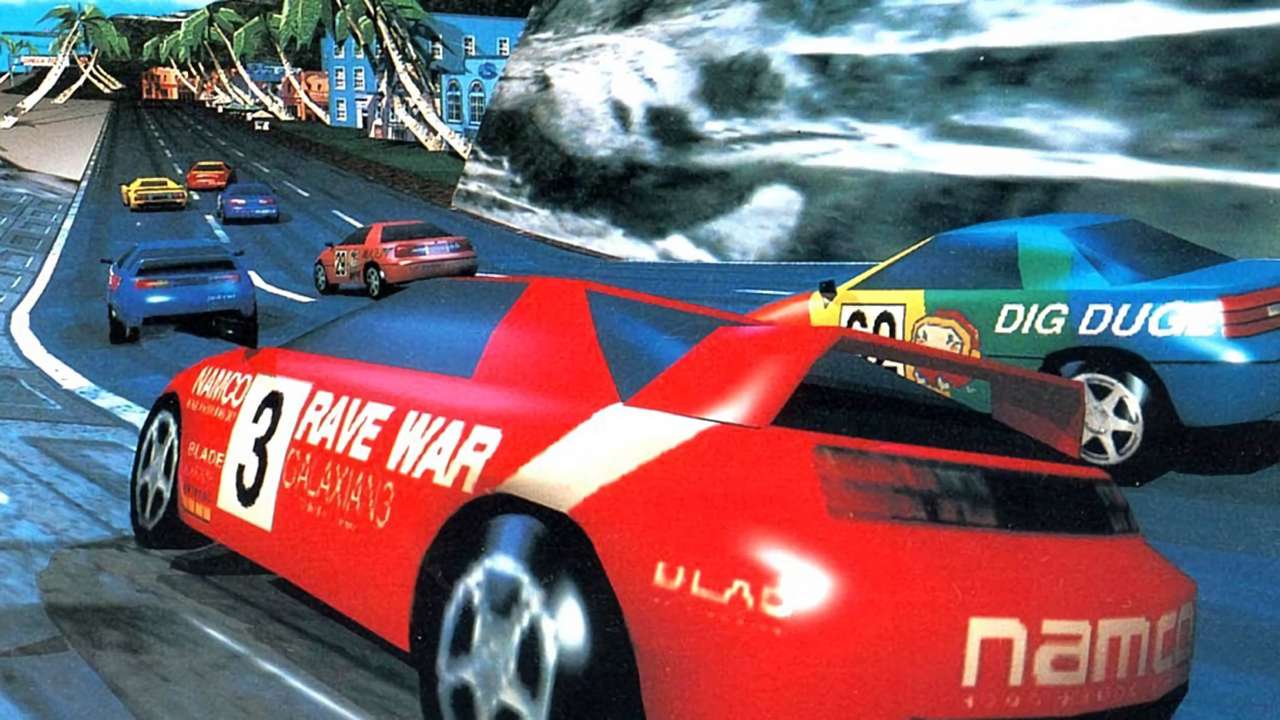 The original Ridge Racer was both the first entry in the series and its first launch title, releasing alongside the PlayStation in 1994 (Japan) and 1995 (everywhere else). Though it was released in arcades in 1993, the faithful PSX port was a huge success and has been credited with the console’s early lead over the Sega Saturn. Ridge Racer also saw an updated version and two sequels on the PlayStation, as well as an expanded port on the Nintendo 64 which, bizarrely, released five years later in 2000.

Ridge Racer was also the first game to support the neGcon, a controller released by Namco around the same time. The neGcon was a weird but supposedly wicked motion controller designed for racing games, imitating analog-stick controls in racing games by letting you twist each half of the pad in opposite directions. It was another way that Ridge Racer showed off the PSX, supporting an exclusive peripheral that you couldn’t find on any other console.

The first Ridge Racer immediately defined everything about the eventual series: high-speed arcade racing where you drift around corners to keep your speed up; a vibrant, realistic look with car models and tracks that were entirely fictional; tracks set on mountain roads and other natural Outrun– and Daytona USA-esque backdrops instead of closed circuits; and bangin’ techno soundtracks.

Overall, Ridge Racer laid down three defining traits or “rules” for the series: visceral arcade racing, dazzling visuals and fantastic original music. Every entry is meant to meet these criteria; when you pick up a Ridge Racer game, it should include these three things. With four Ridge Racer games releasing for the PlayStation in as many years, these rules were firmly underlined.

In this way, it makes sense that Ridge Racer became such a common launch game. You know what you’re getting, you know it’s fun and you know it will show off the power of your brand-new hardware. If you’re picking up a new console and knew you liked the series, why not pick up Ridge Racer? 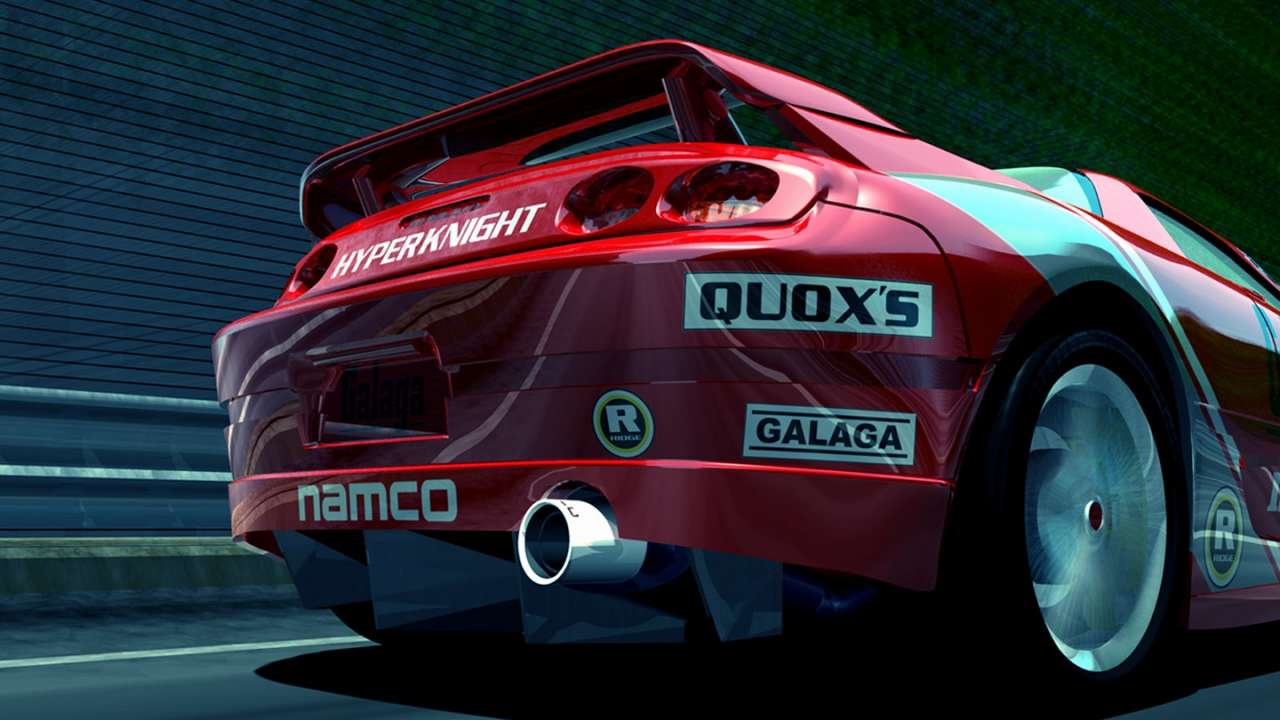 The series’ second launch title was Ridge Racer V for the PlayStation 2 in 2000. It was closer in style to the series’ oddly-titled second entry Rage Racer – darker, grittier, all that jazz you obviously want from a racing game. This better suited Sony’s focus on more realistic gaming experiences with the PS2 and its “Emotion Engine”, a CPU designed to more efficiently render 3D environments for more “emotive” games.

Ridge Racer V wasn’t a very distinct entry in the series, though few of them were after the beloved R4: Ridge Racer Type 4. Aside from updated visuals, the ability to customise your racing team in the game’s career mode and a particularly diverse soundtrack meant to create an “exciting new experience” to “point to the future of the next generation of consoles”, Ridge Racer V was just another Ridge Racer.

Compared to the rest, Ridge Racer DS really felt like a launch title. It added an awful new control scheme where you controlled a steering wheel on the bottom screen with the DS stylus – yeah, that sounds like a fun time in a fast-paced arcade racer – and 6-person multiplayer using a single game card through Download Play. Similar to Super Mario 64 DS (which also launched with the console), it showcased 3D gaming on a portable device through an existing Nintendo 64 title, suggesting that the DS was basically a portable Nintendo 64. Reviews weren’t too hot, though. 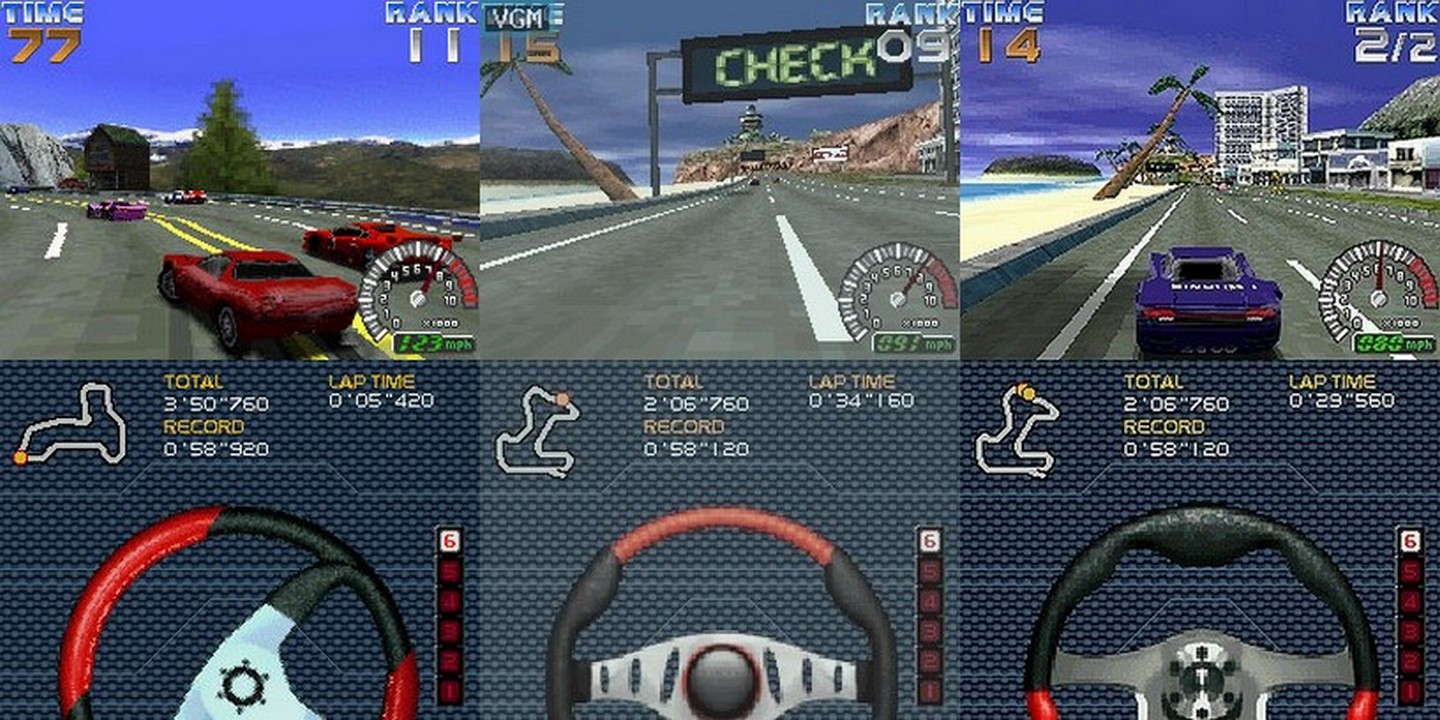 Ridge Racer (Ridge Racers in Japan) launched with the PlayStation Portable (PSP) in 2004 in Japan – at almost the same time as Ridge Racer DS – and 2005 everywhere else. It was a similar situation to Ridge Racer DS but was more embracing of what it was and could be. In short, Ridge Racer was more like a Greatest Hits for the series.

It was perfect for the PSP and showed off what was basically, in contrast to the DS, a PlayStation in your hands. A series that began and flourished on the PlayStation, lovingly collected into a portable package for the company’s first handheld device. It was visually stunning for a portable title, ran at a solid frame rate and brought together a number of tracks and cars from across the series. It even featured a remixed soundtrack across several in-game “discs”: brand-new music on the “Red” and “Blue” discs, remastered songs on two “Classic” discs, and music remixed by the original composers on the “Remix” disc. Alongside R4, Ridge Racers remains the best reviewed entry in the series.

Ridge Racer 6 launched with the Xbox 360 a year afterwards in 2005 and was the first mainline entry to not release on a PlayStation console. As a Ridge Racer title, it followed the series’ recent pattern of being relatively indistinct and was subsequently outshone by Project Gotham Racing 3 and Need for Speed: Most Wanted, which were also launch games.

However, Ridge Racer 6 did take at least one important step forward by introducing online play to the series. As an Xbox launch title, this made sense to include for the Xbox’s online-centric brand and audience. Players could race with 14 players  in total, against replay ghosts from other players, and download free DLC cars. It even went so far as to require online play to unlock some of its vehicles (a feature that would not hold up well to public opinion today), and it was the first high-definition Ridge Racer title. 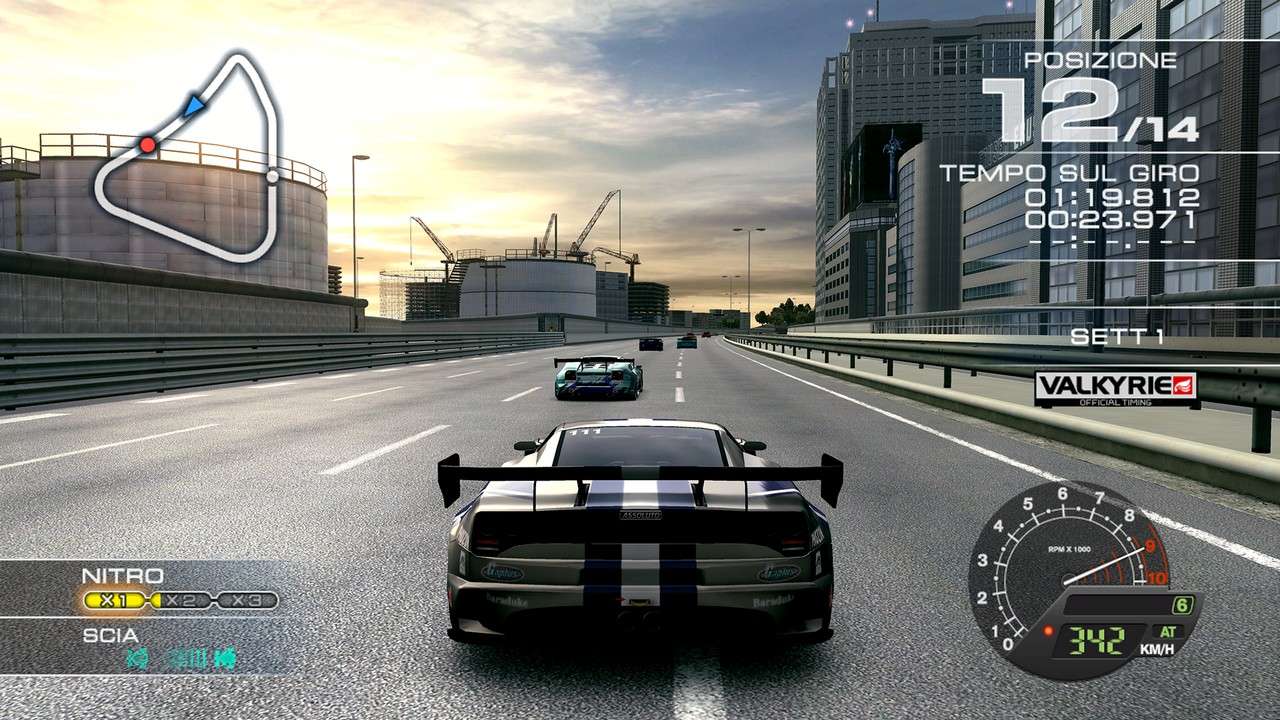 Ridge Racer 7 released a year later with the PlayStation 3 and, like Ridge Racer 6, online connectivity was a major feature designed to highlight the new PlayStation Network. Online play “permeates virtually every aspect of the Ridge Racer experience”: players were ranked on a global ranking system, could play online both competitively and cooperatively, and download extra DLC like events, decals and background music. It became even launch-ier when 3D television compatibility was patched into the game three years later.

Other than that, Ridge Racer 7 was “the world’s first 1080p game to run (mostly) at 60 frames a second” and helped showcase the PS3’s extremely expensive power difference by being a refined version of Ridge Racer 6 with largely the same feature set. Yet again, the gameplay remained almost identical.

Ridge Racer 3D released in 2011 on the 3DS as the seventh Ridge Racer launch game. This time it was one of the portable’s best launch games, outshining the rest of the line-up with polish and good use of the glasses-less 3D display. It also used the console’s StreetPass feature to passively download “Duel Ghosts” for 1-on-1 races.

Of all these entries, Ridge Racer 3D might best represent why the series became a go-to launch game. Nothing about the game itself is all that noteworthy or distinct – it lacked online multiplayer and had little content or gameplay that wasn’t borrowed from previous games in the series ­– but it showed off the portable’s 3D technology well compared to the rest of the launch line-up. For Nintendo, that’s all it really needed to do. 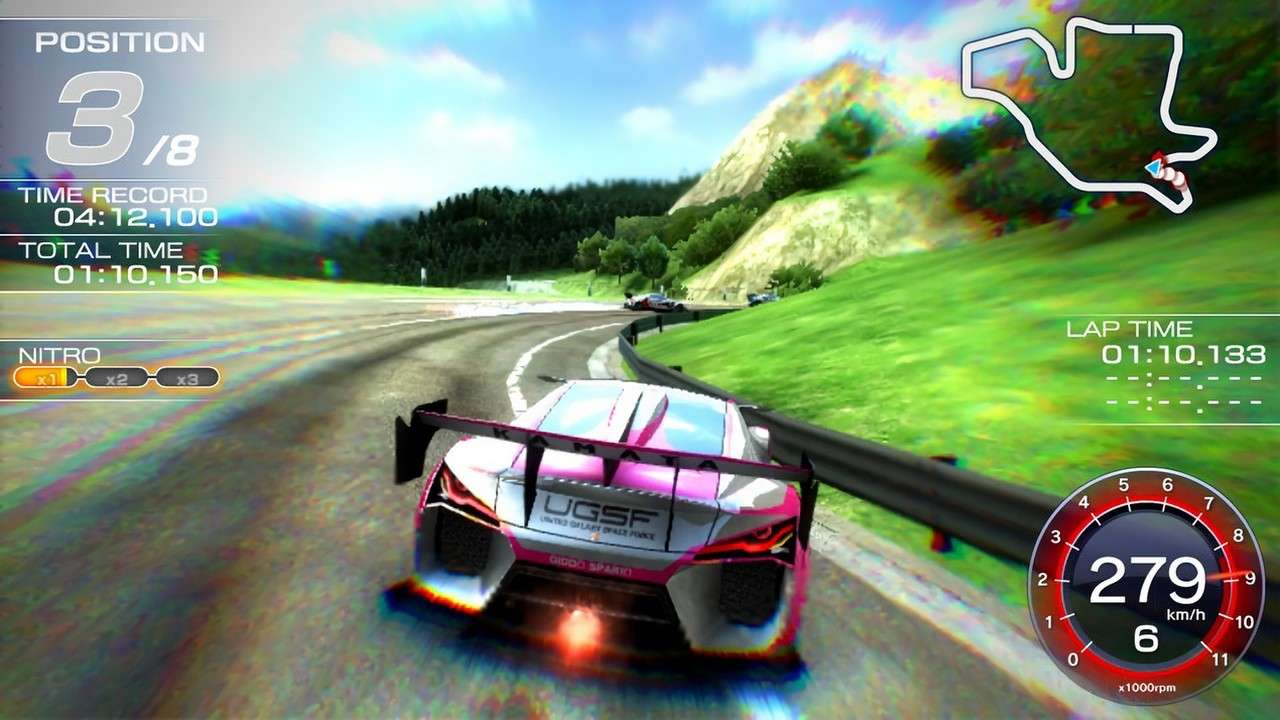 Finally, we arrive at Ridge Racer for the PlayStation Vita. Launching in the same year as Ridge Racer 3D alongside Sony’s sophomore portable, Ridge Racer is the latest and likely final launch game in the Ridge Racer series, and for good reason: it’s goddamn awful. The only thing Ridge Racer had going for it was that it was as dependably fun as any other Ridge Racer game on a gameplay level.

The base version of the game only included three(!) tracks and five cars total, with six more tracks and eight more cars available as DLC. They were all taken from previous entries, too. Compare this to Ridge Racer on PSP, the obvious standard for the Vita entry to reach, which had 24 tracks and 52 cars, or Ridge Racer 2 with 42 tracks and 62 cars. There was a clear expectation and the Vita game didn’t even come close.

It lacked a proper career mode – “you simply attempt the three tracks included in the game (…) as single, one-off races over and over, earning money and winning points as you do so, before being deposited back to the menu screen” – but added an RPG-like levelling system, which meant that your cars would increase in speed the more you play. Remarkably, this car levelling system also applied to online play; the player who had banked more hours is the one who wins, simple as that. Customisation had taken a bump, too. You could give your cars paint jobs but couldn’t tinker with the car models themselves. No new bumpers, spoilers or wheels.

As a launch game, the Vita-centric features focused on the console’s push for online play (though Ridge Racer was not the only Vita launch title with this focus). You chose one of four racing teams and were locked-in with the rest of the players who picked the same, and then helped your team climb the online leaderboards by winning races and contributing points. However, these online features constituted most of the game because of how bare-bones it was. Offline, Ridge Racer was barely more than a demo – though I suppose that’s sort of fitting for a launch game. 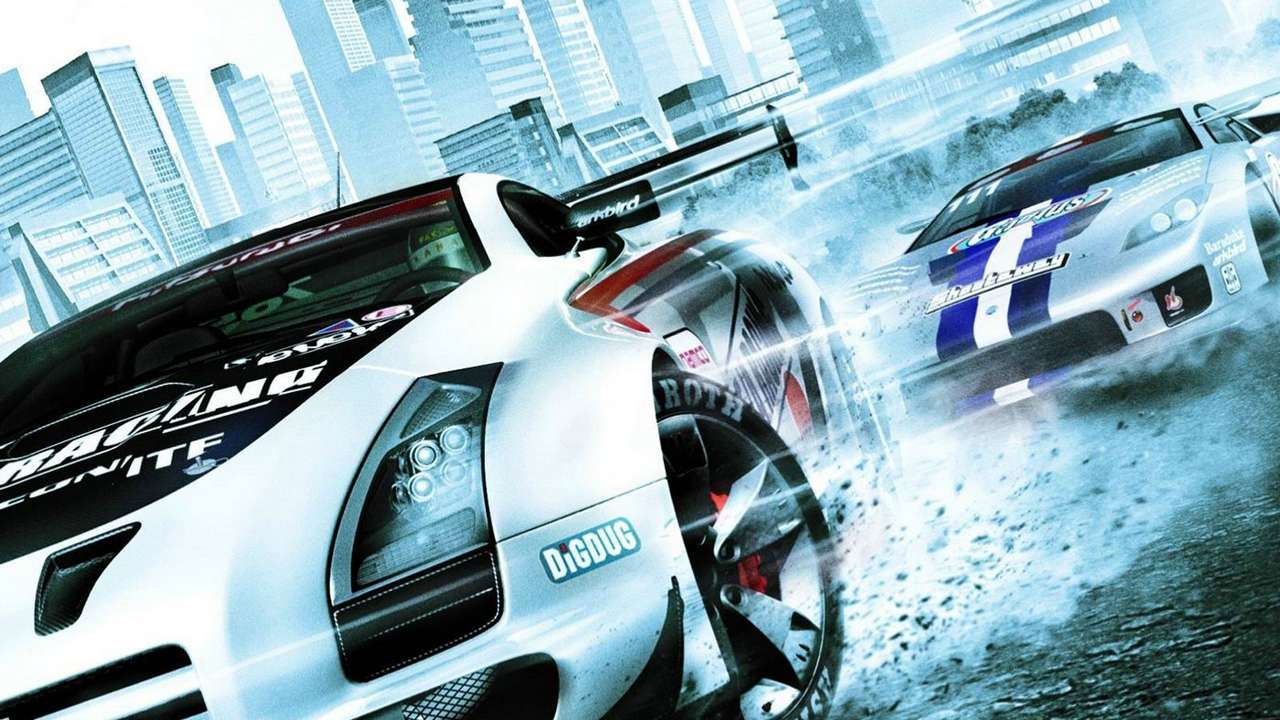 After Ridge Racer on the Vita, there were three more games in the series before it finally fell dormant. The Burnout-style spin-off Ridge Racer Unbounded released in 2012 remains the most recent console release, while 2013’s Ridge Racer Slipstream and 2016’s Ridge Racer Draw & Drift both released for iOS and Android platforms (and are no longer available).

As a series, Ridge Racer had already stagnated for a while – but funnily enough, this served it well as a perpetual launch title. The game itself never changed all that much, the most dramatic being a new “Nitro” boost added to the first PSP entry and online play added in Ridge Racer 6, but this meant that hardware-specific features stood out and were easy to notice. It was always the same game at its core, just with minor additions and tweaks made to showcase the hardware it was launching with. Even the name stayed the same; it was usually just titled Ridge Racer over and over again.

Nevertheless, I miss Ridge Racer. No series has replicated its style or gameplay, though Inertial Drift and Hotshot Racing come close while chasing their own distinct angle. The series also haven’t been ported or made available digitally for the most part, making almost any Ridge Racer title tough to get a hold of in 2020. There won’t be a new Ridge Racer launching with the PlayStation 5 or Xbox Series consoles, but I hold out hope that we’ll get another traditional console-bound entry sooner rather than later.