After multiple betas and its announcement as one of the games available for free with a Playstation Plus subscription, Fall Guys: Ultimate Knockout has established itself as the runaway success of the summer and publisher Devolver Digital’s biggest launch ever. Perhaps the best description of the game is that it’s the video game equivalent of the Japanese game show Takeshi’s Castle — if said game show were coated in layers of sugar and sweet syrup, and adopted the battle royale formula and progression system that Fortnite has made popular over the past few years.

Now, before you groan and roll your eyes at yet another battle royale, it’s important to note that this is the freshest take on the concept in a long time. This is in part because Fall Guys is a party platformer rather than a shooter, and in part because the multiple stages that make up a “Show” (which is Fall Guys for a full game consisting of about five or six stages) challenge players to win in various ways rather than always being concerned with outrunning a ring closing in or outgunning impending enemies like in most other battle royales. For example, a stage like The Whirlygig has players race to the finish line while avoiding getting hit by giant fans; the point being that only a set number of players will qualify to the next stage of the gauntlet. Similar examples include Fruit Chute, a stage in which players must run up a conveyor belt while at the same time dodging incoming giant fruit and Jump Club, which has players  evade two rotating beams which would otherwise knock them out and therefore disqualify them.

The Whirlygig’s fans take no prisoners.

Unfortunately, despite the fact that most stages are fun and make for pretty thrilling plays, some are definitely better than others. This is especially true of team-based stages like Fall Ball, which has players band together to score goals, and Egg Scramble, which sees them work together to steal and hoard eggs. It all sounds like a good time, and it is, but the reality is that team play victories are hollow, and defeats are disappointing, because there’s little that one individual can do to turn the tide of a match. It made for a frustrating experience given that most of my losses came because there were players on my team who didn’t pull their weight — which is also how I learned that Fall Guys doesn’t automatically disconnect players, or apply any sort of penalty or compensation, if they’re idle for too long. Additionally, Fall Guys’ stages are simply not as plentiful as they seem at first; most of them are designed with a particular range of players in mind, meaning that you’ll often find the players you’re matched with selecting the same few stages from only three or four total options. This won’t be a problem when you’re playing Fall Guys in short bursts, but marathoning the game will make it all pretty familiar pretty fast.

With that being said, though, Fall Guys is quite obviously designed for a party setting, with players of all skill levels in mind, and so it’s at its best when played in short bursts. This is excellent because in a battle-royale climate where skill is seemingly everything and every round takes quite a while to complete, Fall Guys distills all the thrills of the genre into an experience that is delightfully short, yet infectious and one that is fun for the whole family. Because of this, I had an absolute blast playing Fall Guys with friends every night since it’s come out; the simple mechanics, intuitive controls and an easy-to-understand concept made it irresistible to stop queueing up for more. The biggest problem that the game has going for it at this moment, however, is that the servers are having trouble keeping up with the game’s skyrocketing — and frankly unexpected — popularity, and so Mediatonic is quite frequently having to take them down for maintenance. Of course, this is totally understandable, but it’s still disheartening to be unable to play the game for hours, or even days, at a time. I fully expect that this won’t be a problem for the small indie team over at Mediatonic in the coming weeks but, as it stands, it would be remiss not to acknowledge current problems. 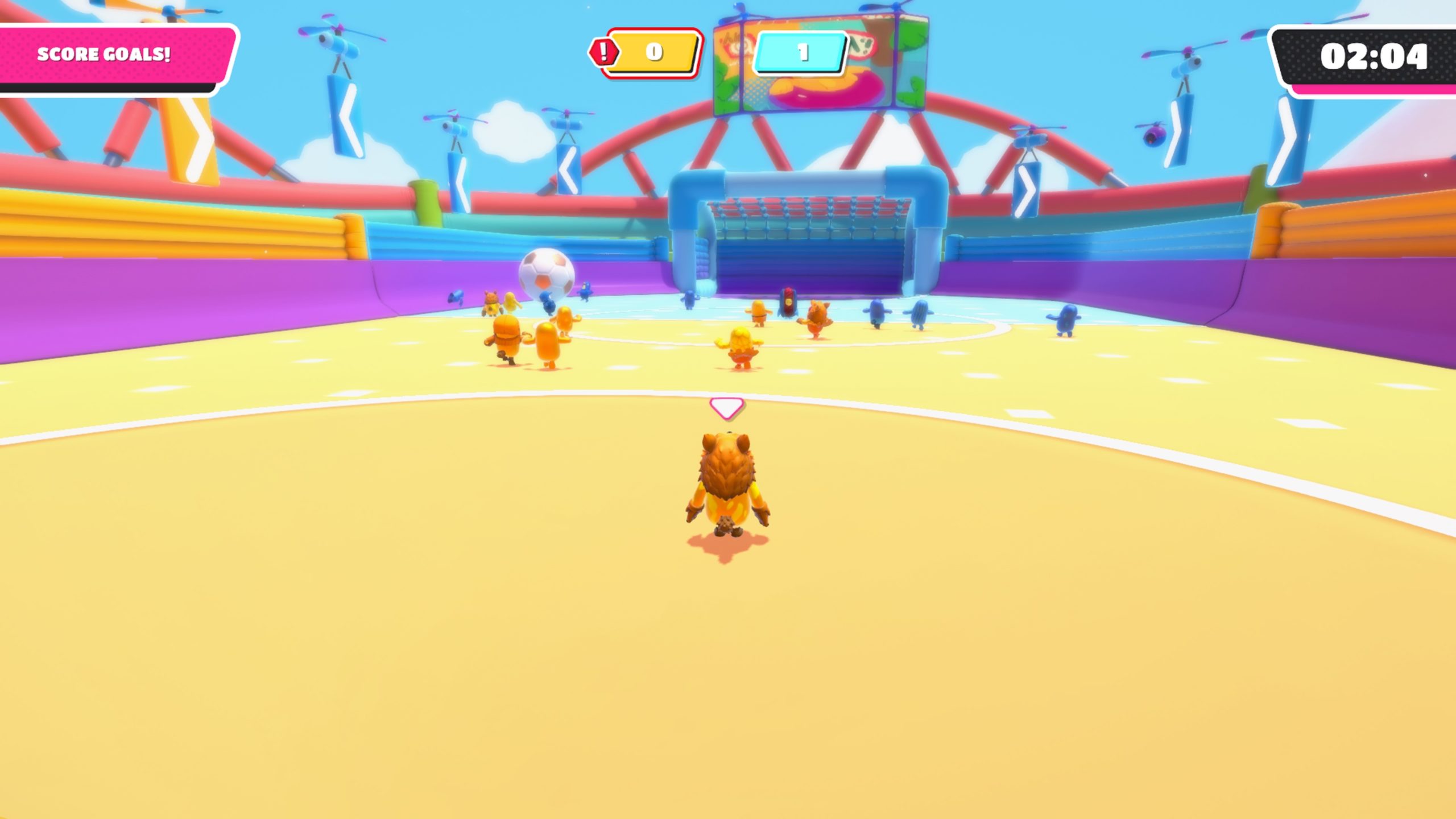 Uh, guys… why am I the only one in goal?

Server problems aside, I am more worried about how Mediatonic will support Fall Guys moving forward. The foundation present is very solid, but party games such as this often live or die by how much content gets added after release — and what type of content it is. The game still needs more stages and quality of life improvements, such as private matchmaking, in order to thrive. To be fair, though, Mediatonic did tease that future content is yet to come, so we know that the studio is definitely planning something, but until we know exactly what that future content is going to be, the jury is out as to whether Fall Guys will become a long-term success rather than a flash in the pan.

In its current state, Fall Guys: Ultimate Knockout is funny, thrilling and a joy to play, but as with many games like it, future content will be key in deciding whether it’s a long-term success like Fortnite and Rocket League. For now, though, anyone with a PlayStation Plus subscription would be doing themselves a disservice to not at least check it out — and those on other platforms are sure to get a fair bit of fun out of it as well.

[…] indie megahit Fall Guys: Ultimate Knockout’s second Season brings with it Medieval-themed additions such as four new stages and a handful of […]