Faithful to the OG: Remaking Games for the Eighth Generation

When is a classic still a classic?

My first game was Spyro 2: Gateway to Glimmer (Ripto’s Rage in the US) on the original PlayStation. I was six or seven years old and I wanted it because it had a dragon on the cover.

Like the games before and after it, Spyro 2 had these vibrant pastel-y colour palettes, this gentle hue that’s distinct and memorable, with Stewart Copeland’s bouncy, colourful prog-rock scores. The basic geometry and models were charming and full of personality, especially for the era. Its gameplay was simple and straightforward, and only expanded in small ways across the trilogy — a very approachable, very pick-up-and-play 3D platformer akin to Nintendo’s.

The Spyro games aren’t really remarkable in the wider video game medium but almost every aspect of Spyro 2 is significant to me. It’s that heartwarming type of nostalgia, a relationship I have with very few things let alone video games (that probably sounds sad). It’s a genuine pleasure to come back to every year or so since my affection for it never really changes.

With that in mind, Toys for Bob’s remake, set to release as part of the Spyro Reignited Trilogy later this year, is sort of a mixed bag for me. It looks fantastic from what little we’ve seen, but most of what defines those games for me comes from the era and age I played them at (y’know, the definition of nostalgia?). Those technical limitations led to the game I played and loved — all those sharp polygons on a curved screen, that sick mono sound quality — and the impression that experience had at an impressionable age.

With re-releases all the rage nowadays, dominating this generation across the current consoles — be they remasters or full-on remakes — this discussion now goes beyond simple nostalgia. Video games are a big deal now, a burgeoning art form, and their re-releases take on a significance they hadn’t in previous generations, partly because they weren’t so common. Now they’re the redux of artistic expression and endeavour, usually by entirely separate developers with separate intentions, often meant to replace the originals for new and old players. The recreation of existing classics with all the baggage that task demands. 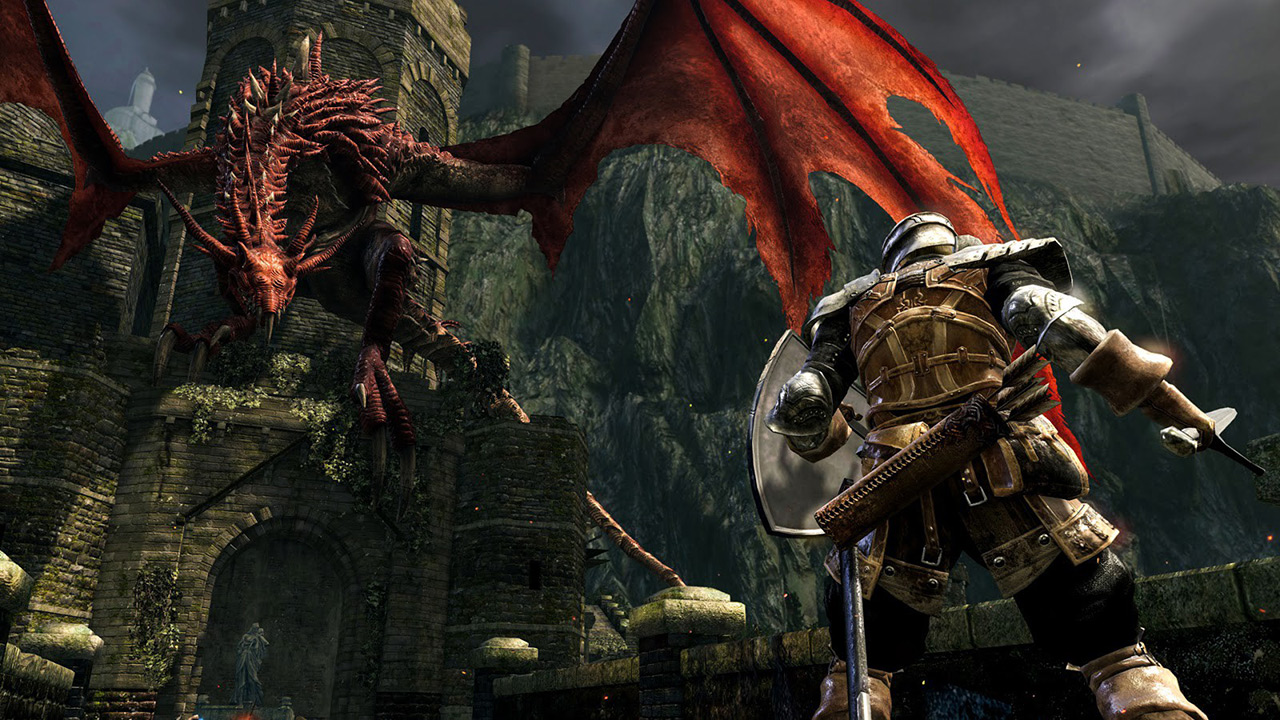 Dark Souls is one of the most celebrated games of last generation, especially among the more ‘hardcore’ sectors of the gaming populace, and spawned a genre of its very own usually called ‘Soulsborne’. It even created an adjective in the gaming world: ‘Souls-like’, or ‘just like Dark Souls’, used to describe every game of moderate difficulty — but that’s the end of today’s history lesson.

Dark Souls Remastered is the exact sort of touchy that describes a modern remaster: taking an established classic and finding that impossible tightrope between ‘not enough’ and ‘that’s way too much, you ruined the game, you jackasses’.

The visuals will be a point of noisy contention, for one. Boosted up to modern resolutions and targeting a solid 60 frames-per-second — these are good things — the changes to the game’s lighting model, effects and a variety of textures and objects not only impact but at times can outright change the original’s distinct aesthetic. Even at their slightest, these things are immediate to the game’s more dedicated fans (I’m not one of them but I hear them screaming over the fence, bemoaning the changed texture of the fog doors).

There are mechanical changes, too. This mostly relates to online play, overhauling the more obtuse elements and adding in a few features from later titles, but it also means adding a handful of quality-of-life adjustments. Even adding a single bonfire (a checkpoint for the unaffiliated): from the standpoint of artistic expression, does this harm the ‘purity’ of the title, especially for new players? Does this create a dichotomy between players of the old and the new?

For video game classics, these flaws — even if they’re frustrating or horrible — can be just as important to the character and personality of the title as anything else in the game. They’re the traits and wrinkles that bond players to the game and players to each other, create the dedicated cult followings that keep these games inside the medium’s ongoing conversation. The Shadow of the Colossus remake is another strong example and it’s only slightly too late to be talking about it, releasing in February of this year.

Team Ico and Fumito Ueda’s Shadow of the Colossus is widely recognised as a true artistic achievement in the medium, one of few in the AAA space, so its remake is another tightrope of a project. Compared to most games, Shadow of the Colossus is recognised less as a commercial product and more as the videogame equivalent to an arthouse drama, dedicated to its craft and vision.

Shadow’s remake was relatively drastic, however: developer Bluepoint Games significantly rebuilt the game to update it for modern standards while keeping as faithful to the original 2005 release as (commercially) possible. Sections of sparse, washed-out, melancholic forest are replaced by something lush, haunting and extravagantly detailed, while its dreamy look and atmosphere, the watercolour-like blur and distortions created through a combination of artistic expertise and pushing the PS2’s tech to its limits, are jarringly crisp and clear. 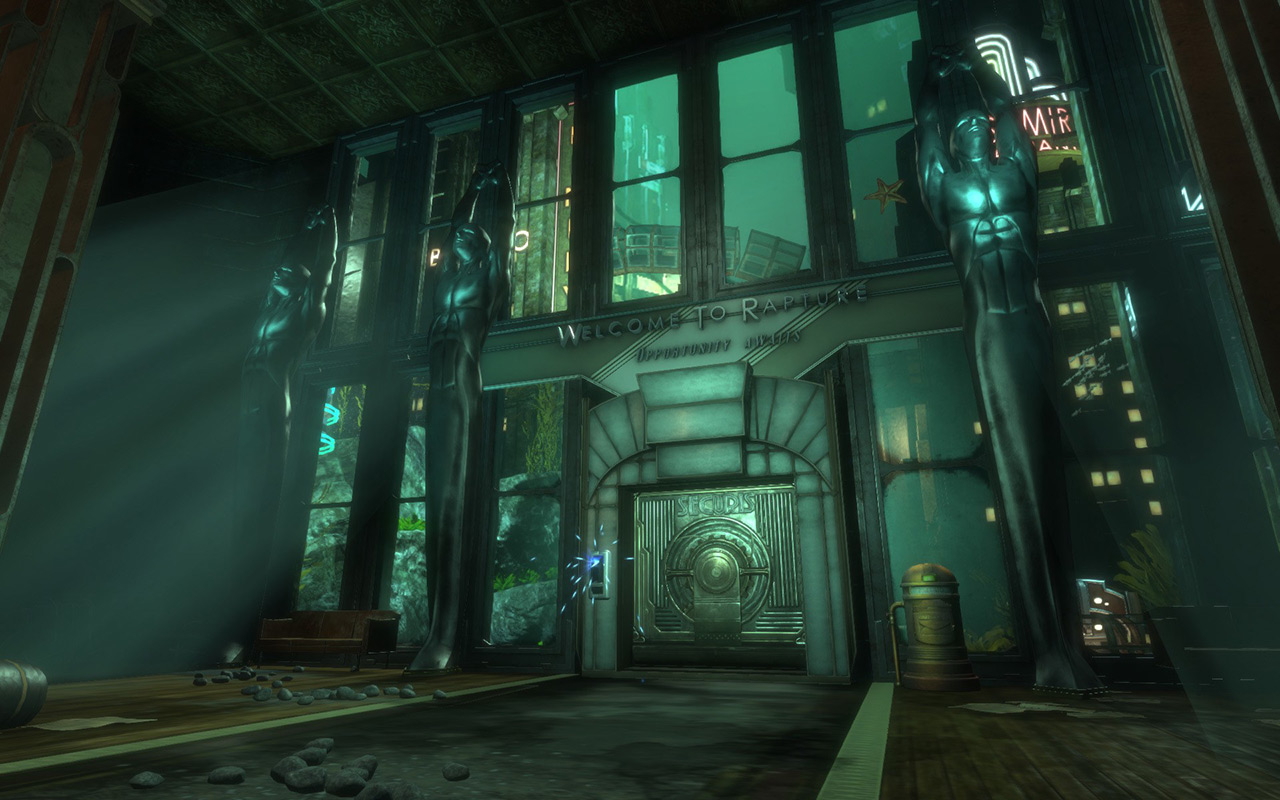 Let’s jump back a couple of years: 2016’s Bioshock: The Collection by Blind Squirrel Games made a number of small changes to Irrational Games’ Bioshock and 2K Marin’s Bioshock 2. These were individually minor but collectively impacted the intended art direction — ‘intended’ being the key word.

In his breakdown of Bioshock and its sequel for Digital Foundry, Richard Leadbetter describes these changes as being as technical as they are artistic.

With the game’s setting of Rapture being a decadent underwater city, “the original developers [made] that felt throughout the game with a strong, shiny specular component giving the sense of wet floors and a ‘moistness’ across the whole game. This is massively toned down throughout the remastered titles. Even the textures used for rushing water are seemingly dialled back, removing some of the original’s look and feel.”

Audio took a similar hit, with “sound […] obviously more compressed compared to the original, reverb is missing [and] even some of the smaller sound effects are absent, such as the tape reel noise playing back a diary recording.”

Changes of this nature in an otherwise lavish remaster could imply an inherent difficulty in remastering highly-regarded classics like Bioshock. There’s a desire to outright ‘improve’ and update elements of a game, especially technically — improvements to frame rate and resolution will rarely be a concern — but smaller changes to textures and audio in a game like Bioshock can result in larger changes to a core aesthetic, to the elements that best represent the original developer’s artistic expression and intent. Like people and calico cats, each re-release of a game is different. Each brings something new to the table — what they’ve added or changed or left alone — and are subsequently dissected and scrutinized, partly because they’re meant to not just update but replace the original, to be the definitive version of the game. What’s so often missed, however, is retaining or recapturing the game’s identity — the elements that define a game — and because video games are complex clockworks of intricate software and artistic efforts, this can be absolutely anything, from the visual to the technical to the mechanical. Any changes whatsoever can upset this delicate balance.

They might always make a profit — so they’ll keep coming — but for the sake of art preservation and series’ legacy, video game re-releases have become a total gamble.

Thanks to Digital Foundry for its technical breakdowns of Dark Souls Remastered and Bioshock: The Collection (it helped a bunch).