From the old Flash classics like Bloons — Tower Defence to Trendy Entertainment’s original Dungeon Defenders, tower defence holds a special place in my heart both as a gameplay mechanic and a genre in and of itself. There’s something innately satisfying about strategically layering your defences and watching hordes of enemies crash and burn against them like waves on the beach; it’s something that Dungeon Defenders captured outstandingly well back in 2011, and that same feeling is alive and well today in Dungeon Defenders: Awakened.

Essentially serving as a remaster of the original, Dungeon Defenders: Awakened has quite a legacy to live up to. Having started its life as an Unreal Engine 3 showcase called Dungeon Defence, 2011’s original Dungeon Defenders was one of the first Unreal Engine 3 games to be released on Android and iOS devices, going on to release on PC, PlayStation 3 and Xbox 360 and record more than a million sales across all platforms. Combining tower defence and action role-playing elements, Dungeon Defenders achieved a solid critical reception to go with its commercial success, with a loyal fanbase helping to cement it — and its 2015 sequel — as a mainstay of the genre.

A major contributor to Dungeon Defenders’ ongoing success was the sheer volume of content it offered; it boasted four main heroes, with eight more added through expansions, and 40 maps in total to go along with countless unlockable weapons, items and pets to mix up your gameplay. With that much content, it’s little surprise that people are still playing it; what is surprising, though, is the fact that the former Trendy Entertainment — now known as Chromatic Games — didn’t pack anywhere near that amount of content into Dungeon Defenders: Awakened, instead opting to release a roadmap for future expansions. Nonetheless, the package on offer here is still quite good for some casual single- and multiplayer fun. Look upon my works, ye mighty, and despair!

Dungeon Defenders’ mixture of 3D tower defence and action-RPG remains as distinctive today as it was almost a decade ago, blending the tower defence gameplay that players know and love with more modern hack-and-slash elements to produce a game that’s not like many others you’ll see. Your task is to stop waves of various enemies from reaching your Crystals either by building and maintaining different types of towers, engaging in combat directly using your “hero” character, or a mixture of both. Each hero character brings different towers to the fray, too: the Apprentice (think Sorcerer’s Apprentice) builds towers that launch fireballs for massive damage, while the Squire prefers cannon that fire bowling ball-like projectiles that deal damage and push the waves back. It sounds like a simple formula, but choosing the right hero for each stage isn’t as straightforward as it might appear and later levels continue to up the ante with new map arrangements, new enemy types, and ever-increasing HP pools to keep you on your toes.

Combined with the unique towers and abilities available to each hero, the game’s loot system comes into play, encouraging players to use their loot wisely and think creatively to come up with the most efficient solutions to protect their Crystals. Players can choose, for example, to space their defences out and thin the waves out as they approach the Crystal, using their hero character to pick off whatever gets through, or pack area-of-effect towers around the Crystal and ambush the hordes all at once. There’s merit to each of these strategies and more, and you can also combine the four heroes’ different defences in order to maximise their potential. Much like the original, Dungeon Defenders: Awakened fully accommodates the master strategist in all of us. 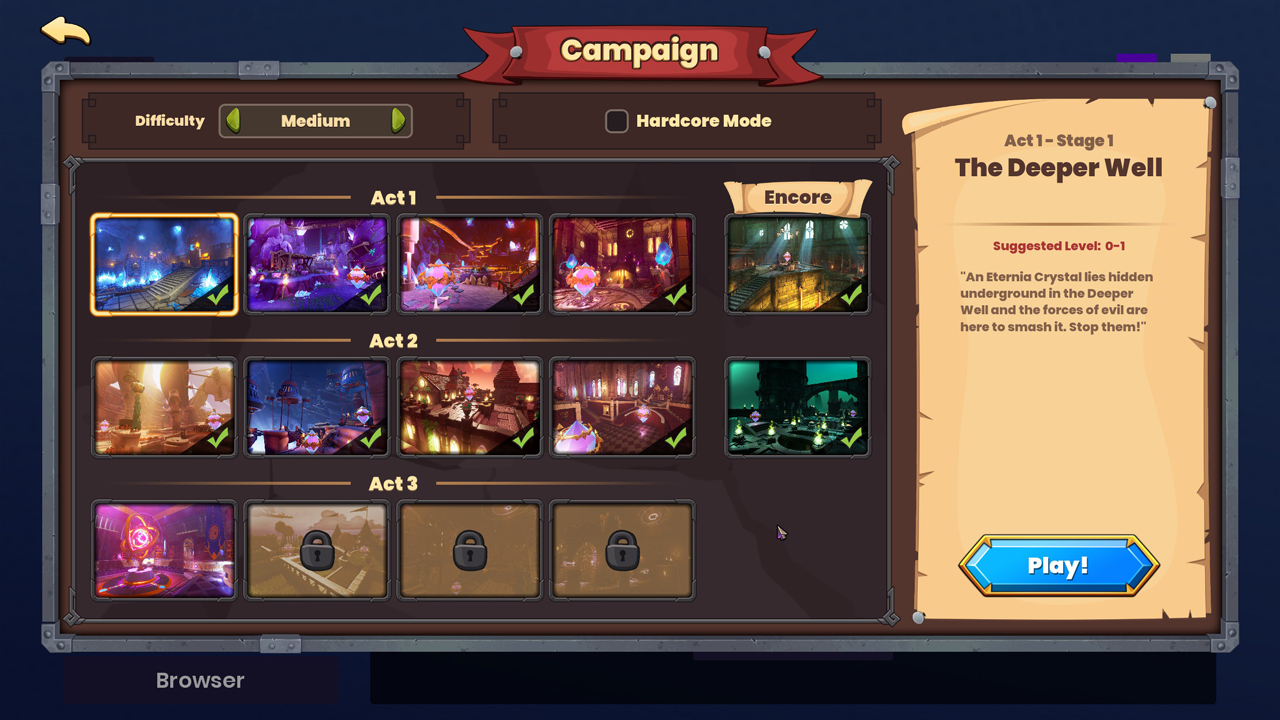 A remaster that releases with less than the original…

Playing with a friend or two will make almost any gaming experience more fun (depending on how good your friends are, of course), but when it comes to Dungeon Defenders: Awakened, multiplayer gameplay is an absolute must: not just because it’s fun, but — in what has become a common theme — because it opens up a whole new world of strategies. It’s easy enough to find someone to play with, as well, with an in-game match browser available as well as a thriving community on Reddit that also provides great resources to learn from. Of course, it’s worth noting that you’ll be hard pressed to find someone in the online community who’s willing to play through the game on lower difficulty settings, with much of the community focused on grinding the best gear through ultra-difficult gameplay, but if there was ever a game worth gifting to a friend just so you can play together, it’s this one.

Dungeon Defenders: Awakened may have shipped with considerably less content than the original release, but on its own merits it’s a surprisingly good game for casual and hardcore players alike, whether they’re playing solo or with teammates. It’s a shiny new version of a game that remains somewhat unique even a decade later, and it’s well worth checking out if you’re a die-hard fan who would be starting their Dungeon Defenders journey over, or a new player who’s looking for a different experience.

Although it’s a little short on content, Dungeon Defenders: Awakened puts a fresh coat of paint on some of the best parts of the original release. It’s worth a look whether you’re a die-hard fan or totally new to the experience.