All the news you need to know from the Square Enix E3 Showcase, Ubisoft’s E3 Conference, the PC Gaming Show and the E3 2018 PlayStation Media Showcase!

The third day of E3 2018’s press conferences is also the busiest, with four conferences for us to cover as we hear from platform holder Sony, publishing giants Square Enix and Ubisoft and media outlet PC Gamer! As with yesterday and the day before, we’re going to shut up right here and just let you get into the meaty, meaty recap!

Pre-event: Kingdom Hearts III has been delayed… But it finally has a concrete release date!

As if to steal the spotlight from EA Play, Square Enix took to the beloved series’ official Twitter account on Sunday afternoon to make a classic good news, bad news announcement. The bad news? Kingdom Hearts III has been delayed. The good news? It’s only been delayed by a month — it’s officially slated for release on PlayStation 4 and Xbox One on January 29, 2019.

Game director Tetsuya Nomura followed the announcement up by explaining that the release date was announced at the KINGDOM HEARTS Orchestra World Tour event, and apologised that Square Enix is “asking for a little more time than initially planned.” Really, though, what’s another month or two when we’ve waited 13 years?

We saw five minutes of Shadow of the Tomb Raider gameplay:

Square Enix chose to open its pre-recorded presentation by sharing some more footage of Shadow of the Tomb Raider in the form of an extended gameplay video. Director Daniel Chayer-Bisson of Eidos Montreal revealed that alongside mechanics from previous Tomb Raider titles, Lara has added grappling hooks and wall running to her bag of tricks. Additionally, “full 360-degree swimming” mechanics mean that we’re sure to see Lara exploring some underwater environments.

As announced at the Xbox E3 Briefing, Shadow of the Tomb Raider is set to be released on September 14, 2018 on PlayStation 4, Windows PC and Xbox One.

Although Square Enix didn’t provide any more detail than the 55-second trailer, past experience informs that we should expect a number of quests allowing players to battle Monster Hunter: World creatures, as well as cosmetic enhancements and more based on the game. Set to begin this Spring, the event’s website notes that the “hunt for Rathalos” will only be open to level 70 characters who have already completed the Stormblood expansion quests.

The Bayonetta and NieR: Automata developer shared a two-minute trailer that — as was the theme of the presentation — didn’t give too much information away. We do know that the game is set more than 3,000 years in the future (with a Judgment Day occurring in the year 5450) and is slated for release on PlayStation 4 and Windows PC at some point in 2019.

The Quiet Man was announced, and that’s all we know:

We only know two things for sure about The Quiet Man: it’s coming to PlayStation 4 and Steam, and its main character appears to be deaf (and quite possibly mute). We don’t know who’s developing it, we don’t know what it’s about — all we’ve got to go by is a one-minute trailer that’s part live-action and part in-engine footage.

The concept is interesting to say the least, and Square Enix did promise to share more information in August. For now, though, “silence rings loudest.”

Another E3, another highlight from Beyond Good & Evil 2:

Ubisoft Montpellier showed off one of the more fantastic trailers we’ve seen for its long-awaited prequel, introducing a host of new characters including the original protagonist Jade, chief cook Pey’j, the holistic chief medic Uma, and the Gambit-esque chief engineer, Callum. Narrative Director Gabrielle Shrager and Senior Producer Guillaume Brunier also revealed that the publisher has its teams in Barcelona, Spain, Bordeaux, France and Sofia, Bulgaria working hard on the game before also showing off some pre-alpha gameplay footage that just looks… Phenomenal.

Brunier and Shrager then introduced Hollywood heavyweight Joseph Gordon-Levitt to the stage, who very enthusiastically revealed that his community-sourced production company, HitRECord, is teaming with Ubisoft to provide music and visual assets, the first of which will be shown off at BGE Fest in Montpellier this Spring.

Creative director Julian Gerighty revealed that the raids will come as free DLC after the game’s March 15, 2019, bringing “new story, new areas to explore and new activities.” Each one will be set after the game’s main story.

Prior to that, Gerighty also shared a stunning cinematic trailer and revealed that players will be able to choose a new Specialisation when they reach the end-game; all of this came in addition to everything that Ubisoft chose to reveal during Monday’s Xbox E3 Briefing.

The incredibly well-received crossover was announced when CEO Yves Guillemot and Ubisoft Toronto’s Laurent Marville brought none other than Nintendo legend and prolific smiler Shigeru Miyamoto onto the stage and presenting him with a model of Fox’s Arwing ship. As one might expect, Fox will only appear on the Nintendo Switch version of Starlink, which is set to release on October 16 alongside PlayStation 4 and Xbox One versions.

The rumours were true — Assassin’s Creed Odyssey takes us to Ancient Greece:

After weeks of anticipation, Ubisoft revealed Assassin’s Creed Odyssey, which allows players to choose between Alexios and Kassandra, two Spartan warriors who “share the bloodline of a legendary Spartan hero.” The game will not only feature naval battles but more traditional on-land, armour-clad Spartan battles, horse riding, swimming, partying and even fighting a bear.

Ubisoft also graced us with an extended gameplay walkthrough of the “Trouble in Paradise” mission, which sees Kassandra traverse the beautiful Mykonos City. Assassin’s Creed Odyssey is set to be released on PlayStation 4, Windows PC and Xbox One on October 5.

Steam is coming to China:

Valve announced that it is continuing its partnership with Perfect World Co. — which has launched both Dota 2 and Counter-Strike: Global Offensive in China before — to “actively promote Steam’s launch, marketing and games lineup” in one of the world’s largest markets. The companies did not provide a release window at the event, but we’ll be on top of it when they do.

The popular genre gets yet another entry with Automaton Games’ take, which offers 1,000-player matches as opposed to the typical 100. The game also offers the ability to track opponents through footprints and wildlife and a range of environments within the same map, with Automaton hoping to add single-player missions and objectives as well. Also distinguishing Mavericks from the litany of other battle royale games on the market is its MMORPG-style social hub, which makes it a very interesting prospect indeed.

Coffee Stain Studio takes itself a little more seriously this time around, with Satisfactory asking players to explorate, generate resources and eventually build massive factories. Engineers must build a strategy around expansion and automation, and can produce jump pads and moving walkways as well. Unlike many other games in the space, Satisfactory is presented in the first-person perspective, which is cool.

Overkill’s The Walking Dead is set to release this November:

Publisher 505 Games made the announcement in the title’s first gameplay trailer, which shows off the game’s four playable characters, each of whom come with their own backstory, skill tree and play style. The title is set to release on PlayStation 4, Windows PC and Xbox One on November 6 in North and South America; the rest of the world will have to wait until November 8. It’s a long way from its original 2016 release window, but we’re glad it’s finally here!

Michelle Zauner, better known as the frontwoman of the indie-pop band Japanese Breakfast, provides the soundtrack for this graphic novel-esque open world adventure title. We’ve only gotten a peek at the game so far, but we do know that it’s heading to “PC and console” late next year.

The Last of Us: Part II opens the show with a kiss:

Naughty Dog debuted another trailer for The Last of Us: Part 2, once again exploring Ellie’s sexuality before the camera cuts to the ward in combat, showing off new mechanics including the ability to hide under cars and craft explosive-tipped arrows. Neither Sony nor the developer was prepared to offer a release date for the hotly-anticipated sequel yesterday, but we’ll keep on top of any new developments as they happen.

Preceded by a live musical performance, the demonstration of Sucker Punch’s upcoming open-world game showed off the beautiful scenery of feudal Japan’s Otsuna Grasslands and gave us a better look at the game’s combat mechanics. The game is based around stealth — hence the name — and the debut gameplay footage shared some of the skills players will be forced to implement in order to survive. As with The Last of Us: Part II, Sony did not announce a release date for Ghost of Tsushima.

Remedy Entertainment is back with Control:

The Alan Wake and Quantum Break developer has 505 Games on board to publish the third-person shooter, which features a female protagonist named Jesse using a shape-shifting gun to fight for control of her workplace from an “otherworldly threat”. Given Remedy’s penchant for secrecy, it’s no surprise we don’t know too much else about the title at this stage.

The traversal wizards at Insomniac Games finally showed off some more of its Spider-Man experience by treating us to a whole mission. The demo showed off the phenomenal job Insomniac has done with Spidey’s web-slinging, and also introduced us to Electro, Rhino, Scorpion, Vulture and Mr. Negative as villains before something off-screen caught Peter’s attention.

Marvel’s Spider-Man is set to be released on September 7, exclusively on PlayStation 4. Fans who pre-order the game will be able to kit Spidey out in the high-tech suit he wore into space during Avengers: Infinity War.

…but we have now seen some gameplay! Léa Seydoux and Lindsay Wagner made their first appearances, adding to the game’s insane star power and confirming that Hideo Kojima’s first joint since splitting up with Konami back in 2015 is almost unmissable. There aren’t really many other words to describe the trailer, so just check it out.

There’s a Kingdom Hearts PS4 Pro, and it comes with the whole series:

Kingdom Hearts III has been everywhere during E3 2018, but it’s only fitting that Square Enix saved its biggest announcement for Sony’s event. Alongside yet another trailer detailing the game’s Pirates of the Caribbean story — as well as the worlds of Tangled, Frozen and Monsters, Inc. — the company announced the stunning special-edition PS4 Pro pictured below, which comes with the KINGDOM HEARTS All-In-One Package which… Does what it says on the box. It includes KINGDOM HEARTS HD 1.5+2.5 REMIX, KINGDOM HEARTS HD 2.8 FINAL CHAPTER PROLOGUE, the “Impossible Odds” dynamic theme, and obviously Kingdom Hearts III itself.

The All-in-One Package will also be available on its own, launching alongside Kingdom Hearts III on January 29. 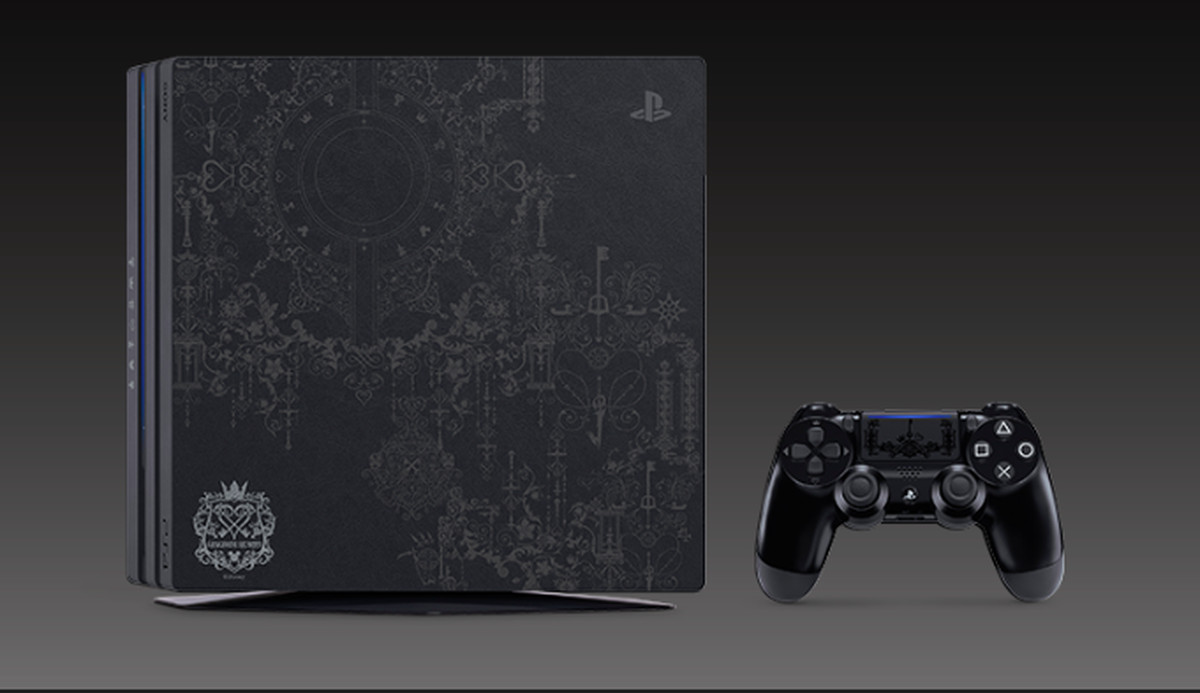