In The Messenger, everything comes back to time travel. I wish I could start every review that way.

Developed by Sabotage Studio and published by Devolver Digital, the game begins as a straightforward retro throwback to 8-bit action-platformers. Move left-to-right through the level, beat the boss, repeat. The Messenger modernises the genre in a number of ways – before exploding into something very different. 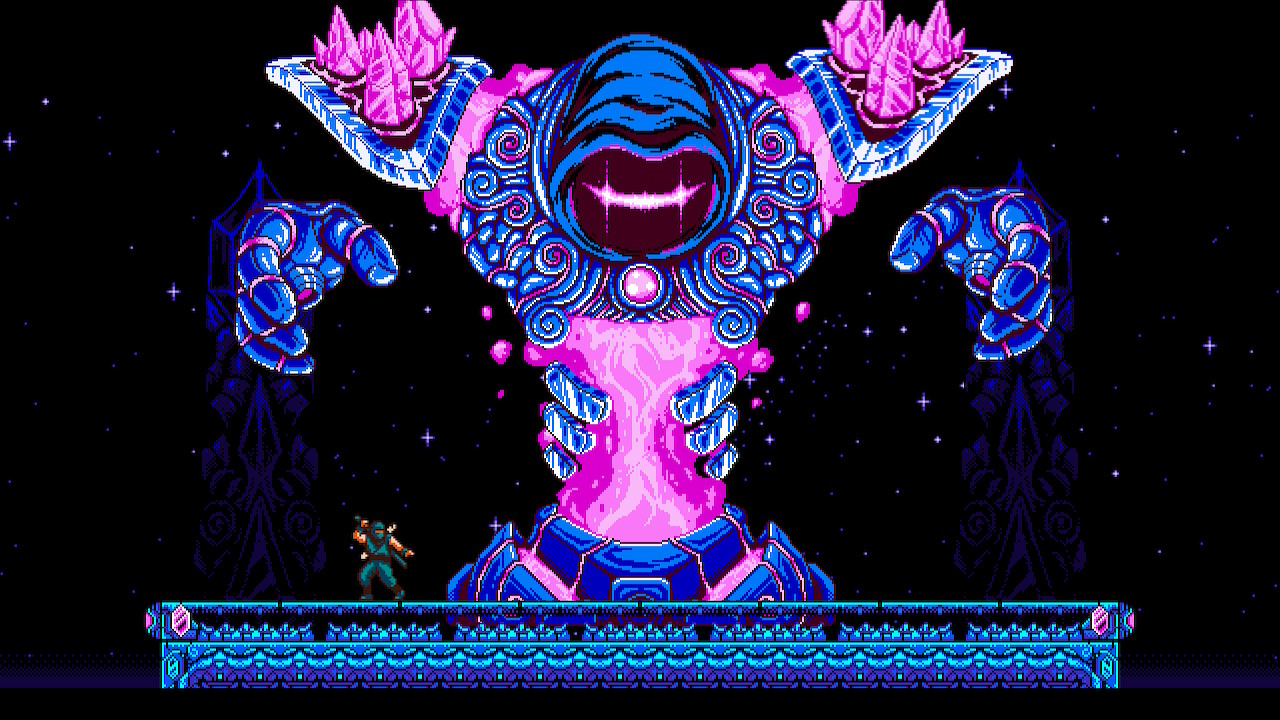 Using the original NES Ninja Gaiden as a foundation, The Messenger builds on its iconic gameplay – the nimble ninja player character, the quick slash attacks, the wall-climbing, the throwing stars – and updates it into something more fluid and accessible. The titular Messenger (who the player gets to name, à la Legend of Zelda) controls extremely well with low latency – no floatiness, no sliding, just direct action-response gameplay that becomes second nature in no time. It keeps the deliberate nature of Ninja Gaiden and games of its ilk without the brutal arcade sensibilities that make them tough to approach today.

Sabotage Studio took the same modern approach when designing the game’s aesthetic. Crafted in a retro 8-bit style – simple sprites and a limited colour palette – The Messenger’s visuals are downsampled for a modern, HD-friendly look, especially on larger displays. Its lengthy era-appropriate soundtrack, composed by chiptune artist Rainbowdragoneyes using Famitracker, is catchy and distinct and gives each level a memorable theme. Audio design is just as slick with a host of impactful sound effects and attention to detail – it’s a small update over its inspirations but muffling the audio whenever you’re underwater is such an endearing and oddly entertaining little feature.

Even the writing is better than what you would expect from a platformer throwback. Mostly comedic, the charming script is consistently funny and polished, always poking fun at either the player or the game itself. It only packs a few surprises story-wise, generally unraveling as you would expect, but the otherwise quality writing (chat with the shopkeeper whenever you can) elevates an already strong game into something often joyous. 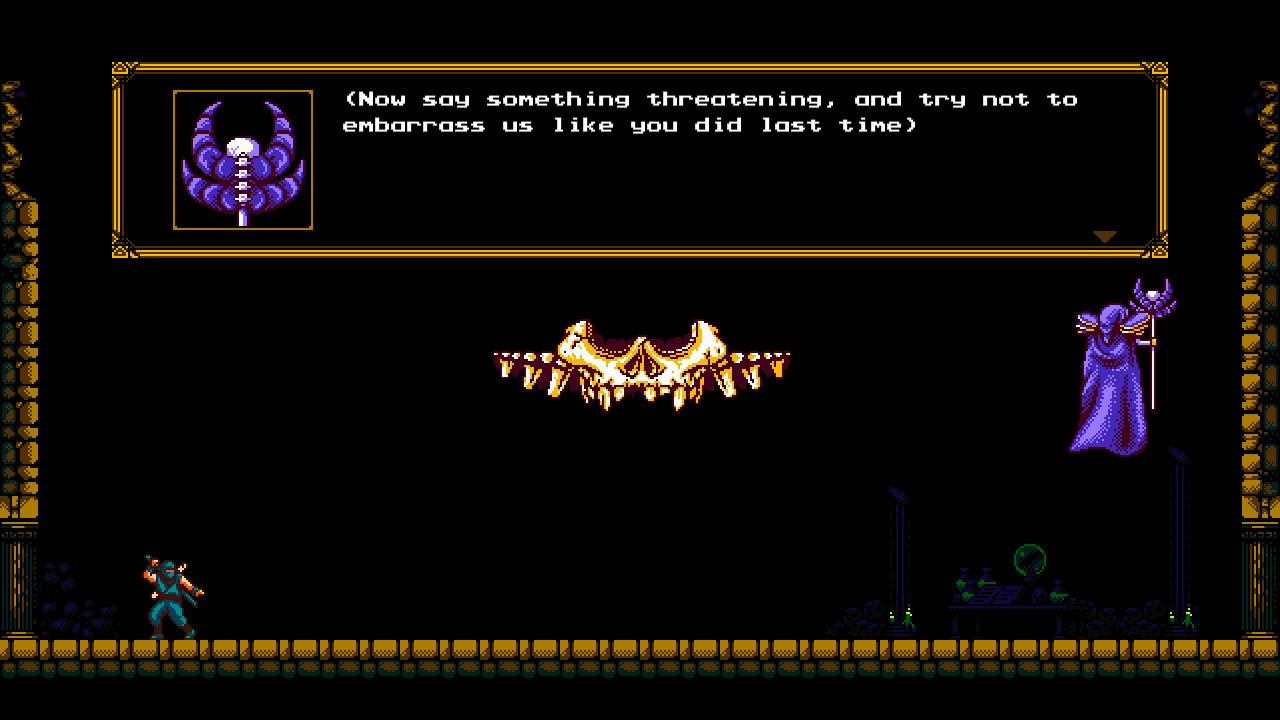 The Messenger isn’t an especially difficult game and shares the same space as other ‘comfortable’ platformers of recent years that aren’t dedicated to the brutal arcade-intended design of its inspirations. This means that, while it can definitely be challenging at times (more so towards the endgame), the addition of a basic skill tree and checkpoint system – instead of a limited stock of lives ­­– keeps the game focused and compelling, always reloading close by after each death. At worst, you reload only a few screens back.

Personally, its difficulty felt similar to the easy-going SteamWorld Dig games, Shovel Knight and modern Nintendo platformers (aside from Donkey Kong), with a dash of Castlevania: Symphony of the Night. It isn’t interested in challenging the player’s platforming skill; more so in showcasing the ingenuity of its level and enemy design. It’s a platformer that doesn’t punish players incessantly but encourages them to push on towards the next upgrade, level or boss – the next ‘fun’.

For those looking at the Switch version, especially as a portable title, I found The Messenger perfectly playable with the Joy-Con’s analogue sticks. Sure, that’s heresy for a retro-styled platformer, but I played through most of the game in portable mode and found that the controls translated to sticks without issue. The Pro controller and its traditional d-pad is probably the best all-round option, but the controls are well-suited to whatever you prefer. 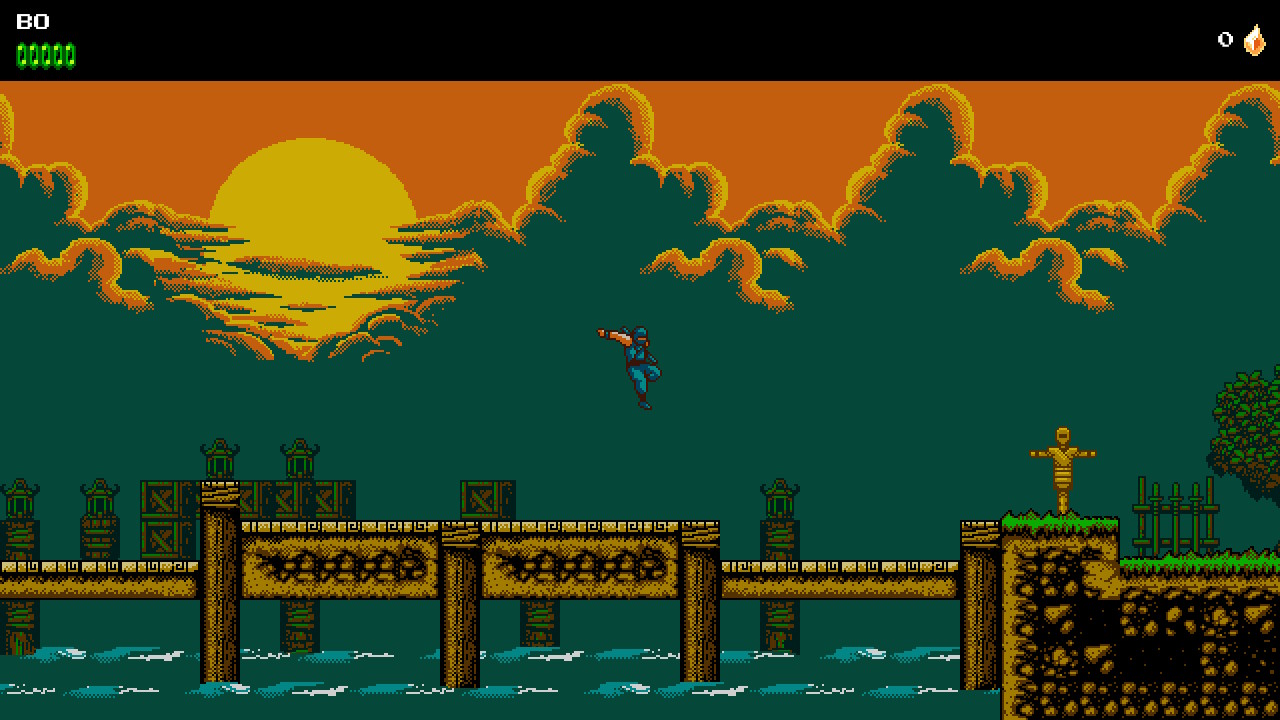 As noted, The Messenger is initially reminiscent of Yacht Club Games’ Shovel Knight, another recent game that aspired to its 8-bit inspirations but modernised the concept with a distinct platformer of its own. Past a certain point, however, the similarities fade and The Messenger evolves into an arguably stronger version of the simple action-platformer it was beforehand. That solid platformer campaign you’ve been playing for hours is suddenly revealed as the prologue of a larger exploratory ‘Metroidvania’, where The Messenger adapts its own established mechanics into a broader, more challenging game.

In a way, The Messenger becomes its own sequel.

Per the Metroidvania genre, The Messenger sees the player switching from a left-to-right side-scrolling platformer to an open-ended platformer, freely exploring large maps and jumping between ‘The Past’ (8-bit) and ‘The Future’ (16-bit). With little-to-no direction besides vague hints on how to progress, the game switches to an entirely new tempo. 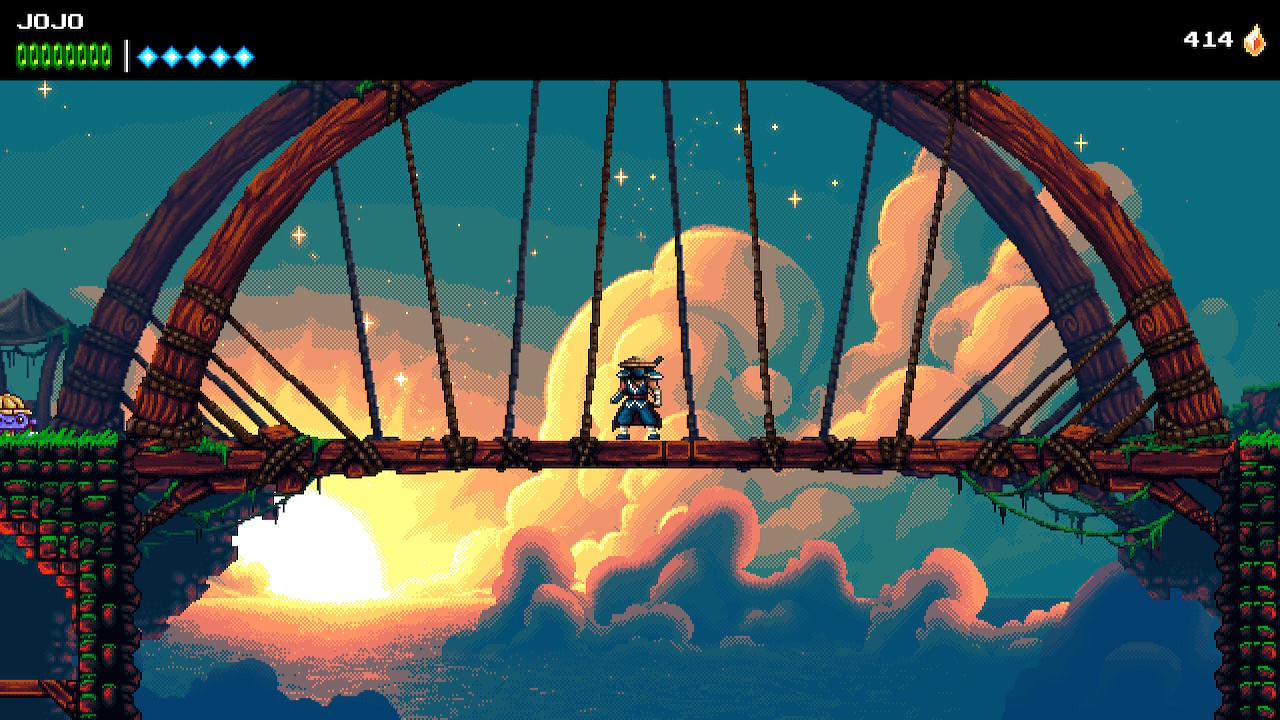 Unless you despise the inevitable wandering that comes with Metroidvania-style games – which can be largely circumvented anyway, for those worried – it’s a change that arrives at the best moment, pushing you forward into an exciting second act and makes use of everything you played and learned beforehand. The new time travel mechanic legitimately revitalises the previous levels with not only new areas to uncover but an entirely new approach in gameplay that focuses on exploration, not just straight-forward progression. Put simply, the Metroidvania genre gives each level added depth and dimension.

This shift applies to The Messenger’s intricate aesthetic, too, giving the initial 8-bit visuals a gorgeous 16-bit paint job. In ‘The Future’, sprites and backdrops have added detail, more complex animation and a wider colour gamut that the specs of the next-gen 16-bit consoles allowed, as well as a new soundtrack, this time composed with the SEGA Mega Drive-based Deflemask.

It’s a genuinely novel approach to the Metroidvania that expands on the side-scroller that preceded it: it’s sectioned into distinct levels, uses a very generous fast-travel system, and an entire campaign to familiarise players with levels and most mechanics before the exploration actually kicks in. It minimises the more tedious elements of the Metroidvania – the wandering and the progression blocking especially – without cutting them out entirely. On top of this, time travel refreshes each level’s look and layout. 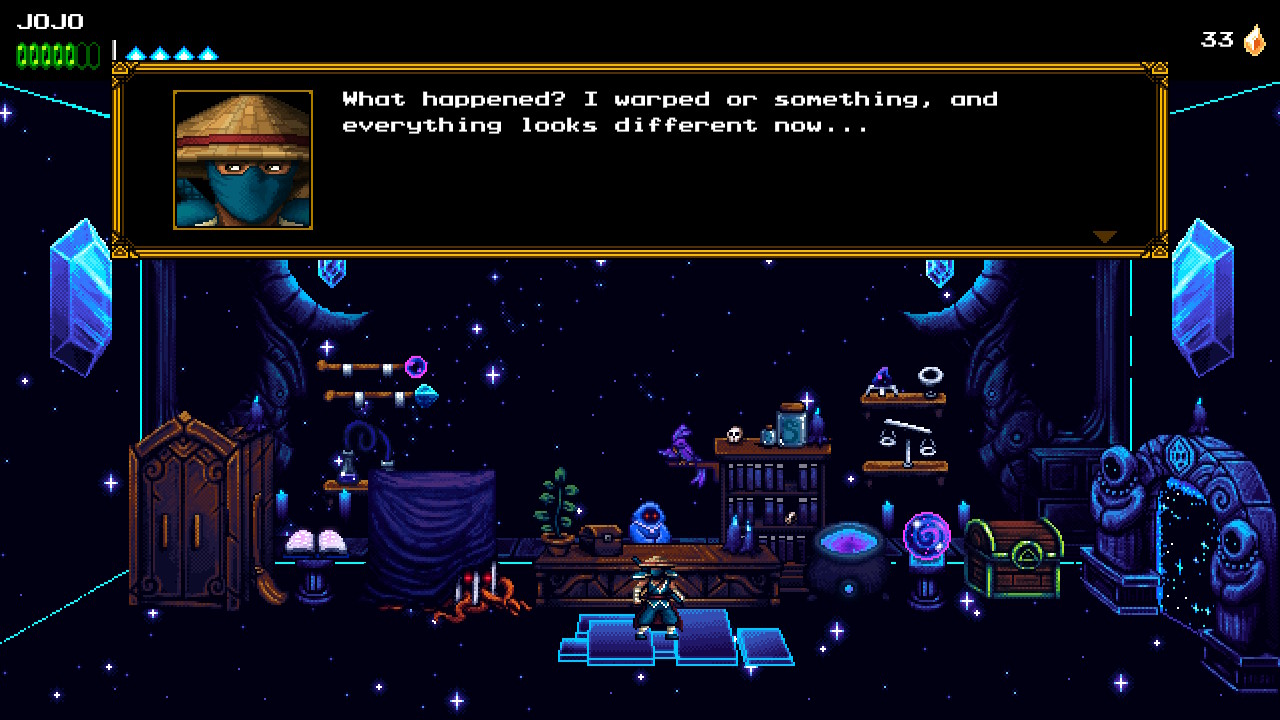 Altogether, The Messenger rises far beyond a simple throwback to become something unique, both in style and genre. Other games have toyed with generational leaps – the Evoland games come to mind – but The Messenger succeeds at giving this simple gimmick genuine purpose and thematic relevance. Not just in story, gameplay and homage, but as a whole, The Messenger is a fantastic experience that adapts the best, most distinct features of its forebears to craft a polished beast of a successor, appealing to newer players (read: myself) as much as it does to the old guard who grew up on the original experiences.

The Messenger comes off as a simple retro throwback but evolves into something phenomenal. It’s a game that’s both an impressive homage to the 8- and 16-bit eras and a novel take on a cult genre, magically fused into one of the most impressive and polished platformers in recent memory. If you’re a fan of the genre, it’s yet another must-play of 2018.

[…] channeled his inner ninja and delved into Sabotage Studio’s The Messenger, which turned out to be a surprisingly deep throwback to the original NES Ninja […]

[…] John called The Messenger “both an impressive homage to the 8- and 16-bit eras and a novel take on a cult genre, magically fused into one of the most impressive and polished platformers in recent memory” – to accomplish all of that on debut is just phenomenal. […]

[…] Messenger was one of my favourite games of last year and developer Sabotage Studio has just released its new expansion, The Messenger: Picnic […]