The Messenger was one of my favourite games of last year and developer Sabotage Studio has just released its new expansion, The Messenger: Picnic Panic.

Set after the ending of the original game – which means you have to finish it first, if you’re a new player – the titular hero takes a trip to an alternate dimension and also to the secluded tropical paradise of Voodkin Island. The demon Barma’thazël– the eye-patched, blade-staff-wielding boss of the “Underworld” level from the main campaign – returns with a new plan that involves kidnapping a bunch of adorable Phobekins during their picnic. It’s all very tragic and moving, as you’d expect from The Messenger or anything out of Devolver Digital, really.

Picnic Panic is absolutely a side story, or, to be more technical about it, “additional content”. The game itself, as it is with every other subject, is very meta and not at all subtle about it. That doesn’t mean there aren’t some major sequel hints – because there is, and there are several – but it’s ultimately a parody-ish expansion to a parody-ish game. 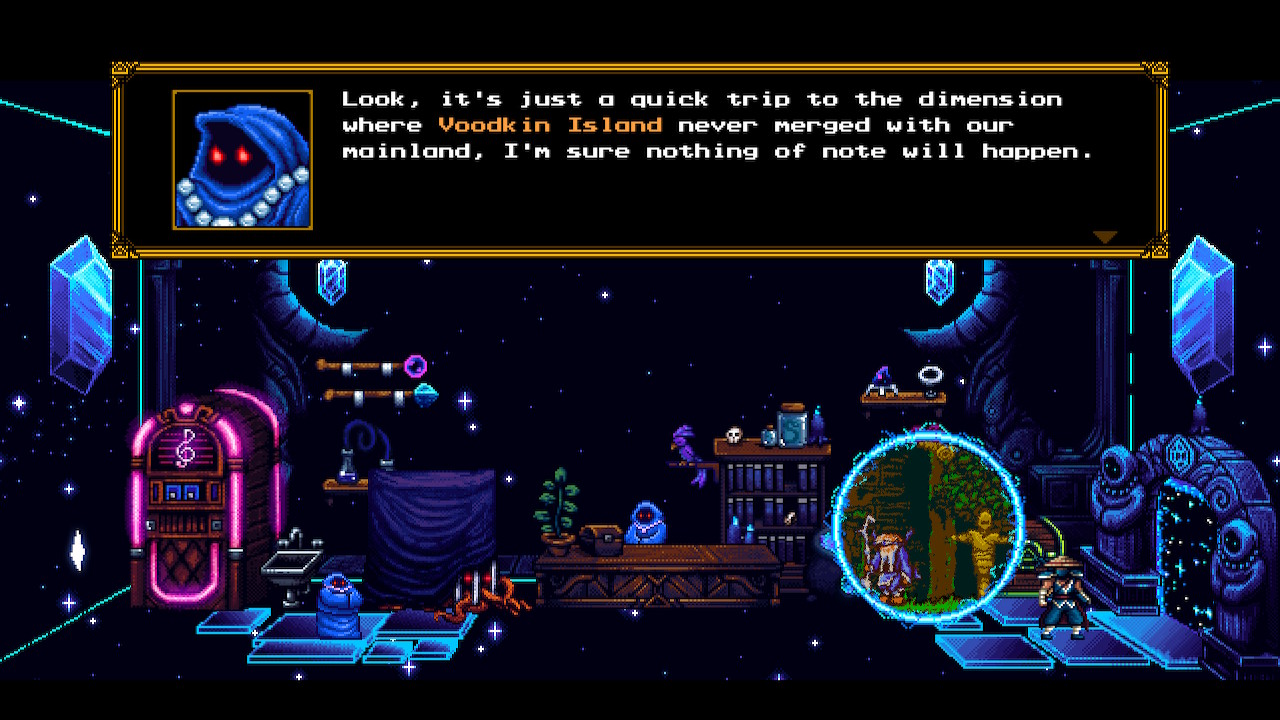 For a free expansion, Picnic Panic is a solid chunk of content that’s up to par with the original. There are three new levels, a couple of bosses, a new score-attack mini-game, all with a lot of new ideas and mechanics that keep it fresh and distinct from the main game. The dialogue is just as consistently funny as I remember it, and there’s a surprising amount of it (with the starring return of “…” as a beloved line). There’s a new killer soundtrack by Rainbowdragoneyes, too, with two funkier remixes of the shop theme that are lit.

Since the original game is sort of split down the middle in terms of genre – the first half is a Ninja Gaiden-style side-scroller and the other is a Metroidvania where you constantly travel between the 16-bit “Past” and the 32-bit “Future” to open up the world – Picnic Panic definitely lines up with the former, with the world-state switching from the latter added in.

There’s no aimless exploration here and no backtracking; it’s far closer to the Ninja Gaiden homage from the original game’s first half. There aren’t any new skills to add to your end-of-game move list – Picnic Panic is simply another handful of novel, well-designed levels to play through of the same quality as the main game.

Oh, and Picnic Panic is hard. Not absurdly so, but having replayed the game’s final level and boss so I could access the expansion (which I guess was a review copy bug), I had a much harder time with Picnic Panic by comparison. The expansion’s first level has a soft learning curve for returning players to get back up to speed but expects an end-of-game familiarity to contend with its difficult back half.

The first boss took me at least an hour to complete and a racing section against your very own Nega-Scott close to the end took almost as long. While it offers a refreshing challenge for those decent at the genre, as someone who’s more-or-less okay at 2D platformers, I found the expansion frustrating at times. It has an annoying focus on memorisation instead of pattern recognition, though your mileage may vary on this issue.

My hands are sore from all the gliding and cloudstepping…

It’s hard to say what is “canon” for a game like The Messenger that is so full of meta gags and homage, but Picnic Panic lays a lot of the groundwork for the seemingly-inevitable sequel. New villains and new Sinister Plots, all set in an alternate dimension (which might imply something in itself). This is alongside the post-credits stinger from the original game, which teased a Western-themed sequel starring a cowboy ‘messenger’ – a Wild Guns-like? A Contra-like? Either way, Sabotage Studio is definitely building towards some sort of sequel with Picnic Panic, whatever form that will take.

In the end, Picnic Panic is just a welcome excuse to return to or finally visit the brilliant Ninja Gaiden-styled Metroidvania that is The Messenger. It’s true that I found it a little frustrating at times – but it’s also very free, so it’s tough to complain when the rest of the package is as great as it is.

[…] loved his original time with The Messenger, and the game’s Picnic Panic DLC delivered more fun ninja action for him to […]