With everything for everyone

Super Smash Bros. Ultimate might look like a remaster but it goes far beyond the basic deluxe treatment. It packs in every character who’s ever been on the roster, almost every stage, it’s filled with more collectibles than ever, includes a wealth of options to customize your experience (hardcore and casual alike), and even has a lengthy, satisfying single-player RPG that succeeds where Brawl’s oft-maligned Subspace Emissary mode failed. 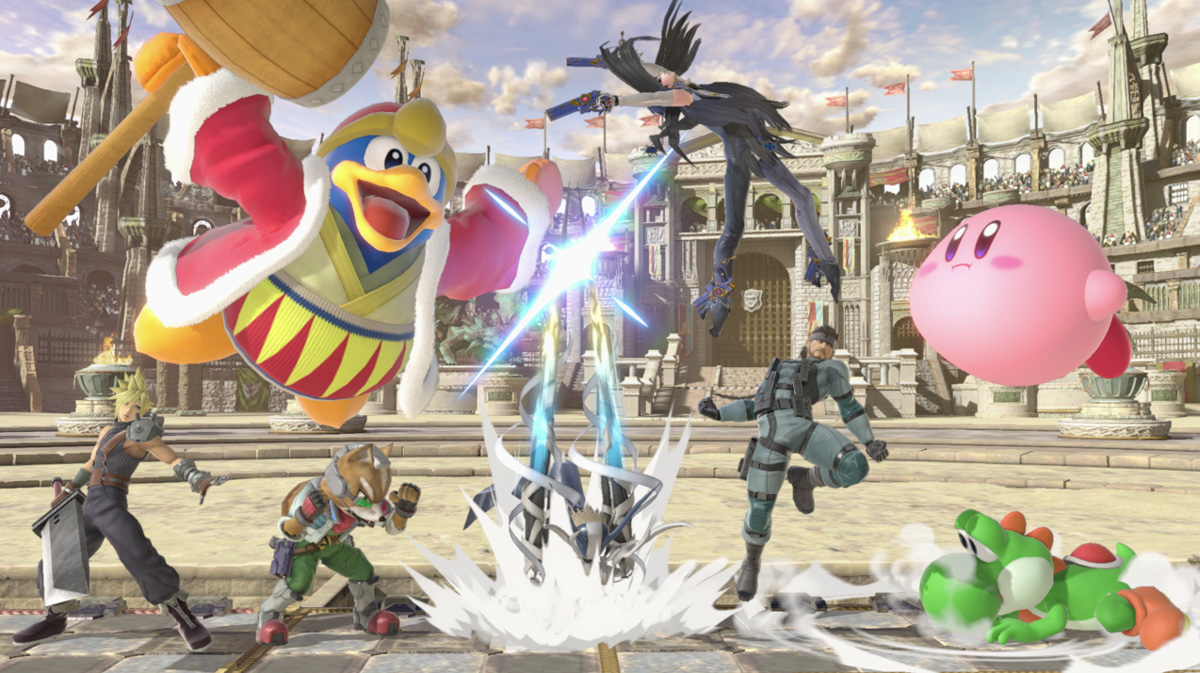 Super Smash Bros. games are essentially ‘platform fighters’, more about knocking players off the stage than dropping your opponent’s health to nil. As a fighting game, players balance keeping their feet on solid ground whilst dealing damage to the other players. Each level is also a unique platforming challenge – some scroll like a Super Mario Bros. game and force players to keep up, others have recurring hazards for players to routinely avoid, while others are plain and safe. With dozens of items and assist summons thrown into the mix, Super Smash Bros. tries to create an even playing field regardless of age or skill level, where each match plays out differently.

With all the items and level hazards stripped away, Super Smash Bros. is a simple and unique fighting game at its core. The controls and move sets are relatively straight-forward and, with a large, open map as the competitive standard, push agility and strategy more openly than other mainstream fighting games. It’s an ‘easy to grasp, difficult to master’ type of fighting game that focuses on weakening and outwitting opponents instead of outright defeating them.

In comparison to other games in the series, Ultimate is most similar to the previous Wii U/3DS release. It sees tweaks across every mechanic but, for most, these will be difficult to pinpoint without being a long-term fan of the series.

For the more casual players (which includes myself), the most important of these are overhauls to the Final Smash attacks, now typically quicker, short-range and no longer include full-on character transformations; a more Melee-like air dash; and a change to the parry-like perfect shield mechanic.

If you enjoyed the previous game, though, Ultimate will feel very familiar. It remains a uniquely approachable and intuitive fighting game that gives players all the options they want to make it a more comfortable experience. 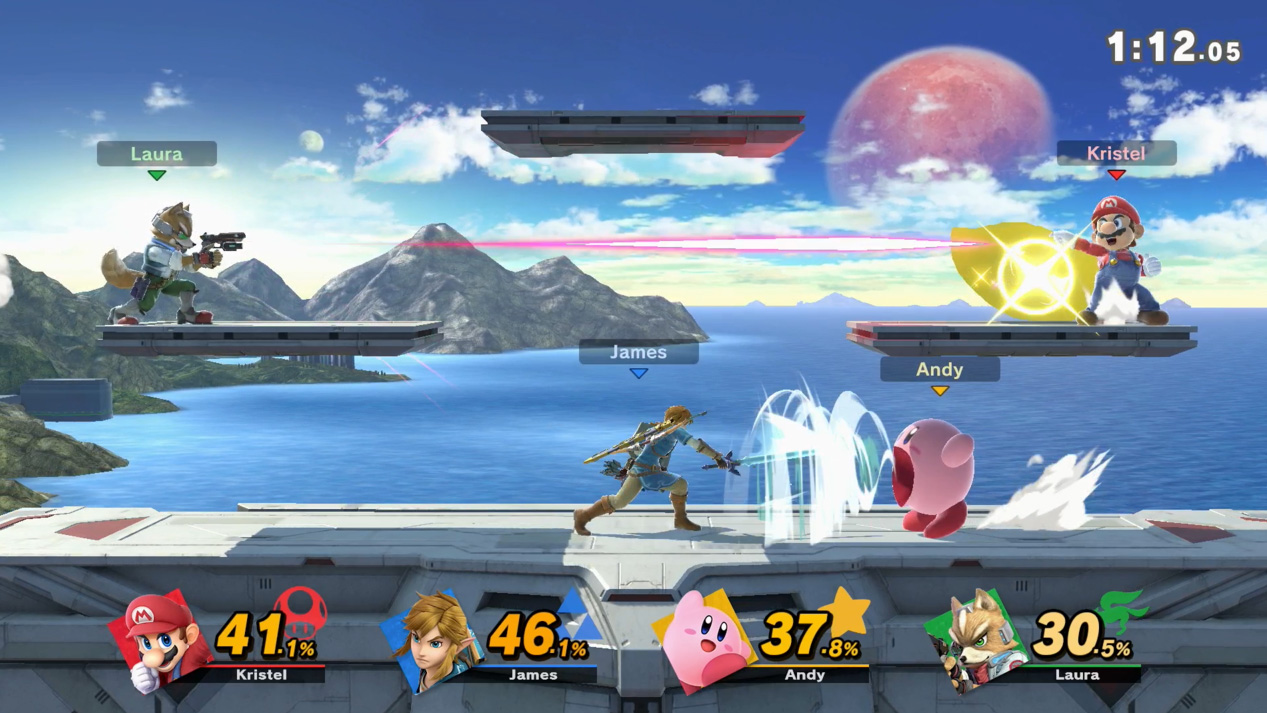 Super Smash Bros. Ultimate’s biggest selling point by far is its inclusion of every rostered character in the history of the series. Alongside new characters like Splatoon’s Inkling, Donkey Kong’s King K. Rool, Metroid’s Ridley and Animal Crossing’s Isabelle (as well as new “Echo Fighters”, Ultimate’s official term for ‘clones’ who are largely identical to existing characters), the total roster count rises to 74 characters (including Mii Fighters), all but eight of whom are gradually unlocked during play.

“Gradually” is the correct term for it, too. Outside of using an exploit, it takes about five to ten minutes of play to unlock the opportunity to unlock a new character through a mildly-difficult match against a CPU. Altogether, especially when losing these CPU matches half the time, the full cast of 71 characters will take hours of play to fully unlock. It’s a long-winded system that matches up with many choices throughout Ultimate, working as an homage to the original eight of the Nintendo 64 original as well as further accommodating the single-player experience.

However, it’s also a system that routinely flips between entertaining and frustrating (especially, I imagine, for younger players). When played casually, slowly unlocking the full roster can be fun and exciting, as well as giving newer players time to try out each character as they’re unlocked instead of overwhelming them with a gigantic roster. For experienced players who want the full roster right out of the box, though, it’s a glacially slow quest. Ultimate tries to soften the slow process with a variety of quick-paced modes but many will still find the experience irritating.

Considering how much freedom of play Ultimate gives players otherwise, the total lack of options to more quickly or even immediately unlock the full cast is odd and disappointing. 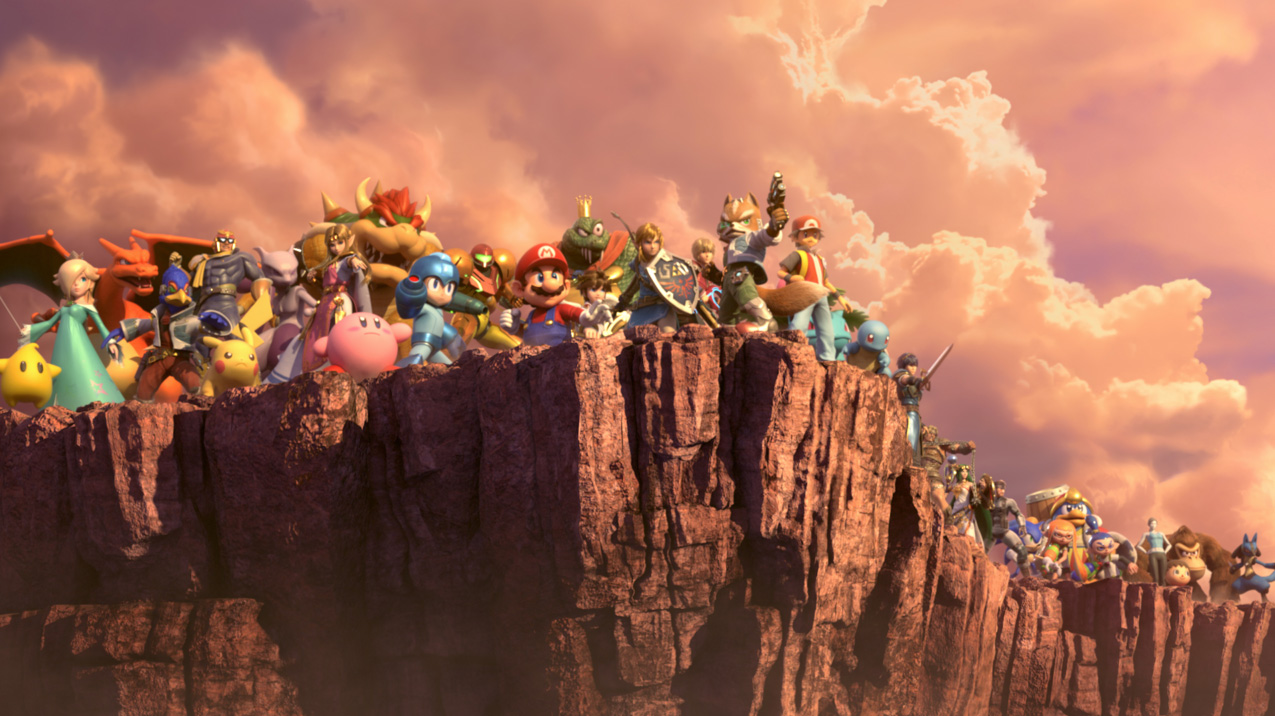 As a love letter to the solo player, Ultimate finally gives the franchise the perfect modes for the casual-playing loner: World of Light and the Spirit Board.

First off, both modes revolve around “spirits”, a new trading card-like collectible that reaches far across every franchise even slightly connected to the all-encompassing Super Smash Bros. series. Every spirit can be equipped in either mode, are attached with a variety of abilities and can be leveled up to increase their power. Compared to every other mode, both World of Light and the Spirit Board are less skill-based and very reliant on upgrading and equipping the best spirits for the situation.

World of Light is a polished and somewhat open single player adventure that cuts out the indulgent (if entertaining) cinematics and level-based structure of Super Smash Bros. Brawl’s Subspace Emissary mode and spends all its effort crafting a more fulfilling experience.

Travelling across a wide game board, which branches off into different directions and zones, each stop on the board includes a match against one of these spirits who must be defeated before you can progress past that specific point. Starting off with only Kirby, these spirit matches see you fight modified versions of existing characters meant to reflect the spirit themselves (some are more successful than others), who you earn as spirits to use and equip upon success. Occasionally you fight the actual roster characters to add to your World of Light-specific stable of characters – which, remarkably, are not unlocked for normal use. 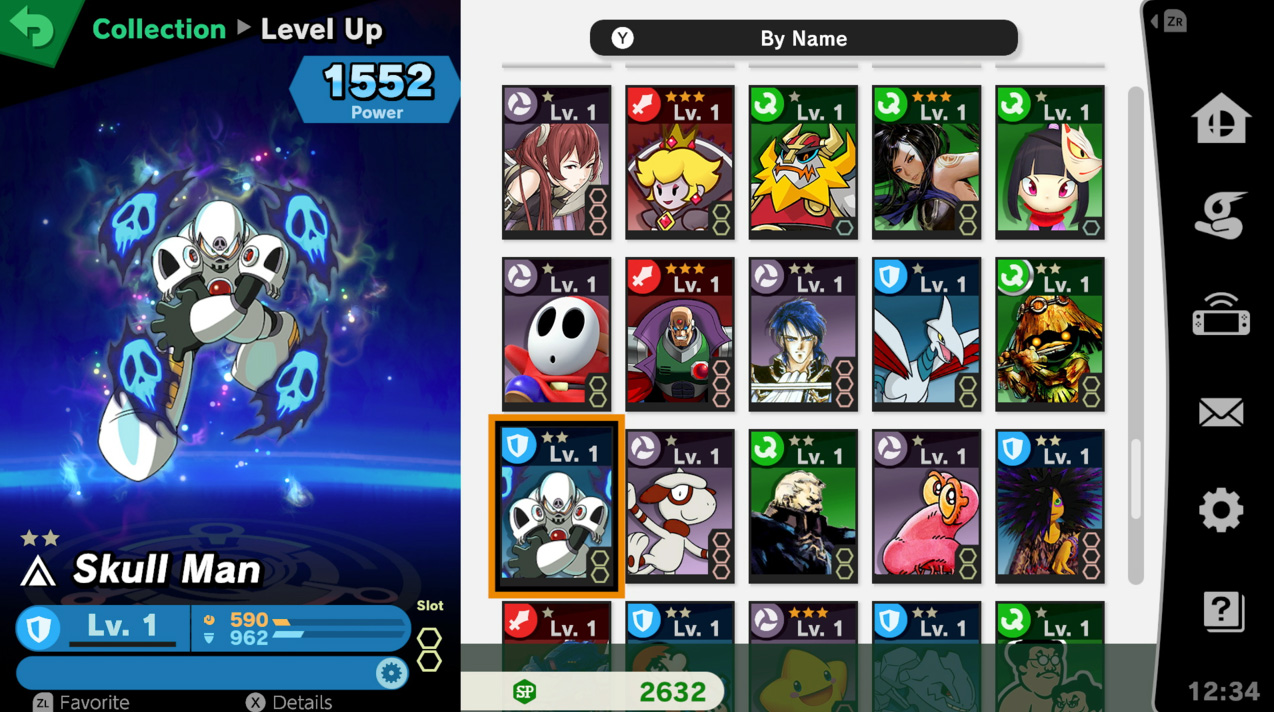 Without any sort of prominent story outside the premise – “go beat up that bad guy in the distance” – World of Light’s success will naturally vary from person to person, but it’s smart and clever nevertheless. Centered almost purely around unique spirit matches, World of Light only goes so far as a way of learning the game and never seeks to teach you the game’s fundamentals. It’s simply a light and unique RPG that makes good use of Ultimate as a foundation to offer a new, distinctive experience.

The Spirit Board is more like a streamlined, roguelike version of World of Light aimed at fighting and collecting spirits quickly. The board has ten active spirit ‘bounties’ open to fight against with most of these lasting five minutes before being swapped out with a new spirit (whether they were fought by the player or not). If you win, you earn the spirit and a handful of rewards. If you lose, the spirit disappears from the board until it eventually reappears later.

Each mode works as a counterweight to the other and offsets their individual simplicity. They contrast well: where one is a static, large-scale adventure, the other is an alive and changing menu, and success in one will always feed into the other. They flow between each other and it soon becomes natural to switch between both modes regularly. Together, they combine into a satisfying solo experience.

While we’re on the topic, the nearly endless range of spirits have replaced the detailed trophy collectibles of previous games – but the rest of the usual collectibles remain. Ultimate continues to contain a huge range of music tracks across every game series (including a dedicated music player and playlist functionality), Mii Fighter costumes and costume pieces, plus dozens of Challenges (in-game achievements) to strive towards. 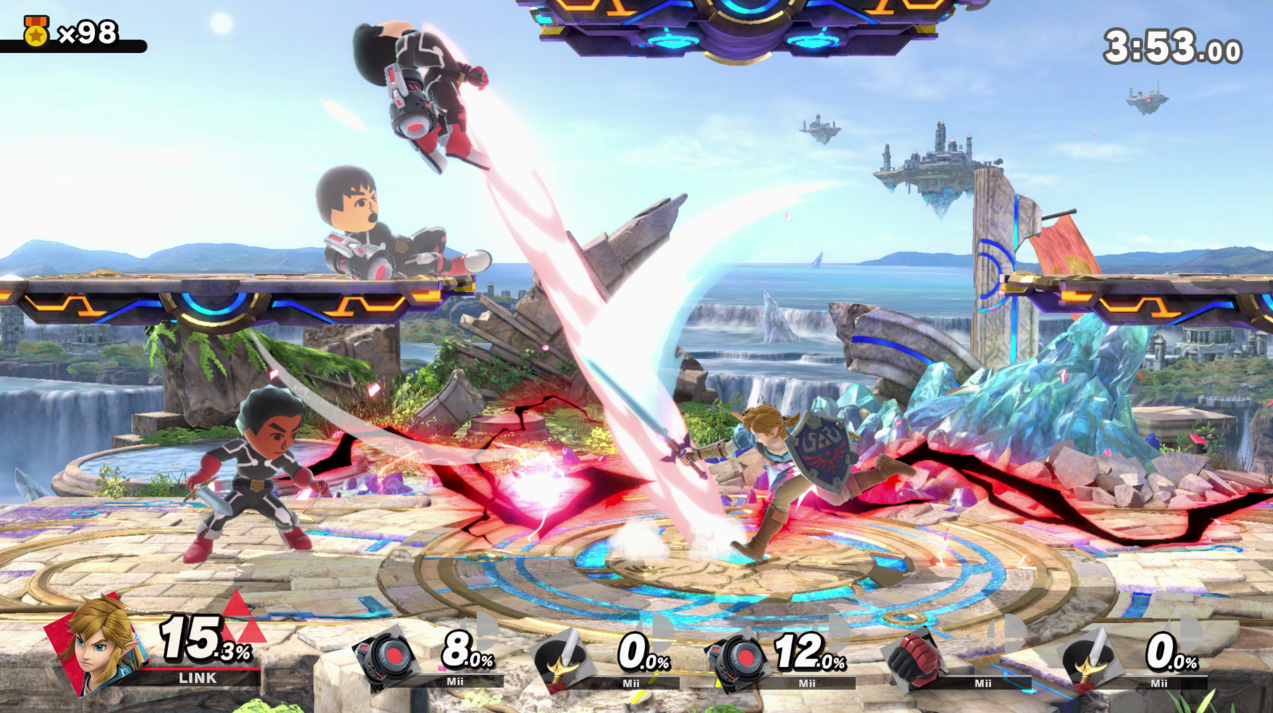 Aside from this, Super Smash Bros. Ultimate includes the Horde-esque Mob Smash mode and the surprisingly endearing Classic Mode, this game’s version of the traditional arcade ladder.

Mob Smash is straightforward but offers a good change of pace. Choosing between the Dynasty Warriors-like Century Smash, defeating 100 low-health Mii fighters; All-Star Smash, a mildly harder Royal Rumble against all 71 characters in the game; and Cruel Smash, an aptly-titled version of Century Smash (where I lost in under ten seconds on my first try), Mob Smash works well for quick bursts of mindless smashing.

Classic Mode, meanwhile, is a clever take on the arcade ladder. Each character has a unique arcade ladder of six normal matches appropriate to the character’s legacy – like Link facing characters from The Legend of Zelda series; or Ryu facing a green-coloured Donkey Kong to evoke Street Fighter character Blanka, complete with Blanka’s theme as the background music – with a “Bonus Game” mixed in there somewhere (a dull, unchanging platformer stage), before finishing with a simple final boss fight, which now includes various unique boss enemies besides the expected Crazy and/or Master Hand.

Both modes are refreshing distractions that work to balance out the rest of Ultimate’s game modes. While they’re most useful for unlocking the massive cast as quickly as possible (Mob Smash is especially good for this), they’re also great little time-wasters and warm-up modes perfectly suited to portable play. 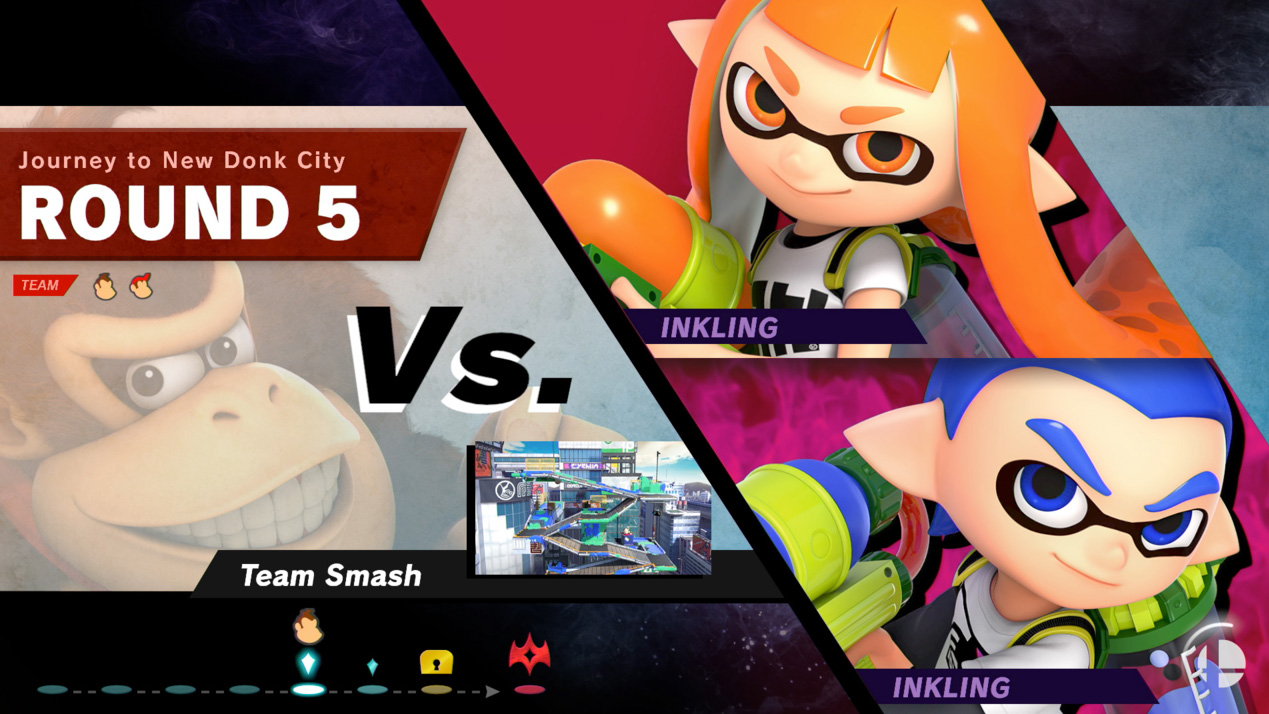 Finally, Super Smash Bros. Ultimate takes a new approach to online play, embracing the competitive player base more than ever before. The previous title split online play into two basic categories: “For Fun” for casual play and “For Glory” for competitive. Like most other parts of the game, Ultimate tries to land somewhere in the middle.

Players can either select “Quick Play” to start a match as soon as possible, match with opponents in the background using “Background Matchmaking”, or create a lobby or “Battle Arena” with specific rulesets. As players play online, their “Global Smash Power” – their player ranking in Ultimate – will shift to more accurately match opponents.

Due to how broad and customisable the Super Smash Bros. experience is, however, Ultimate also lets players set their “Preferred Rules” to improve matchmaking further. Some will find this more frustrating as this system doesn’t necessarily ensure that you’ll end up in the match style you prefer, prioritizing proximity to the player over these preferred rules, but Ultimate’s format is clearly designed to get players into matches as quickly as possible. It’s also a system that lends itself to the competitive community, who will naturally congregate under the same preferences.

I can’t comment on how well this system works competitively but for the more casual players, dipping into online between World of Light, collecting spirits or pushing through the harder difficulties of Classic Mode, Ultimate is simple and to the point. By prioritizing fast matchmaking, balanced out by ranking and preferred rules, Ultimate aims to keep its community playing together and often. It tries its best to manage an inherently splintered community without letting players scatter far apart into every corner. As always, time will tell how successful this system is. 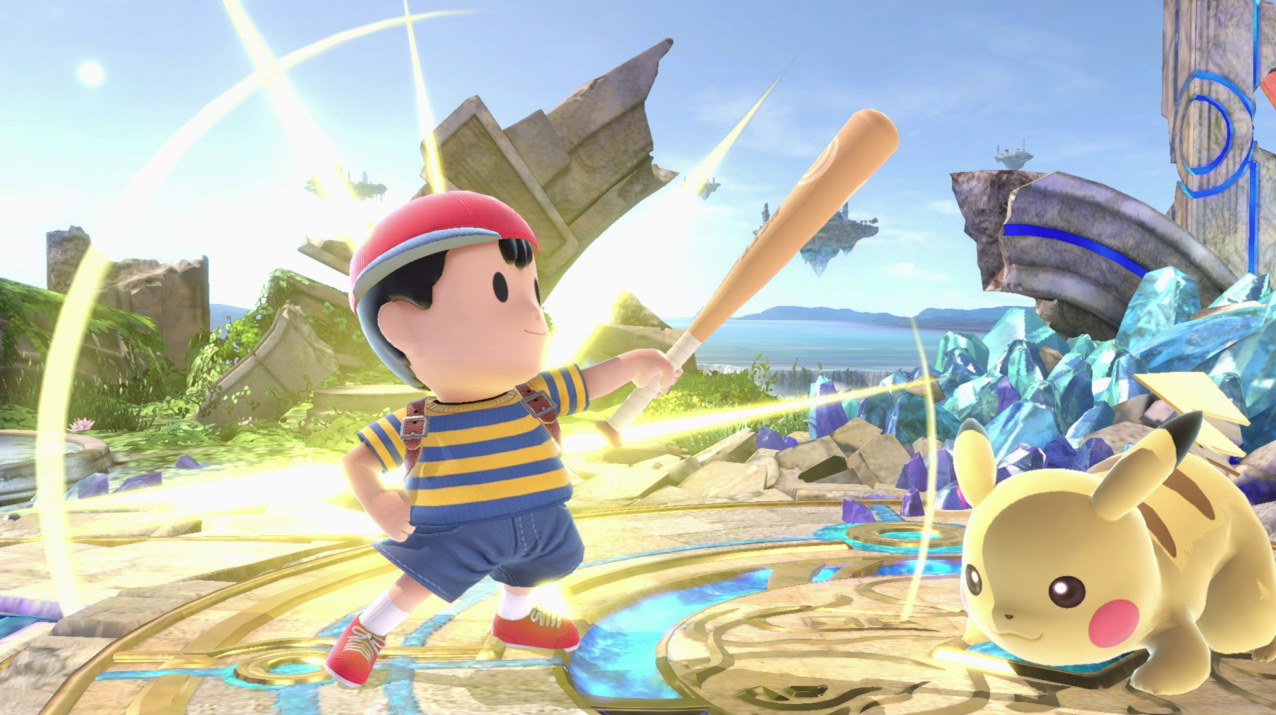 Living up to its name, Super Smash Bros. Ultimate is truly the series’ definitive title. Reaching out to the solo player with its breadth single-player modes, the local party player with its gigantic roster, and the hardcore player with its subtle tweaks for long-term competitive play, Ultimate tries to be everything for everyone. Though it can seem never-ending, it never feels daunting.