Screencheat: Unplugged makes a great first impression. A joyful, goofy, colourful aesthetic and a light, bouncy jazz soundtrack, it’s meant to put you in a good mood. That first chaotic match is the same, immediately full of sudden screams and flailing as the party gradually and messily grasp what’s going on, cheering as you shoot empty space with a musket and actually hit someone.

It’s a shame that this high doesn’t last long. Developed by Aussie studio Samurai Punk, Screencheat: Unplugged is a first-person shooter where every player is invisible and is killed in a single hit. To win, you have to ‘screencheat’, watching the split-screen segments of the other players to figure out their location before they figure out yours. Think split-screen GoldenEye except you’re all invisible and everyone’s that dick who says they aren’t cheating but totally are.

Screencheat‘s genius really comes from its simplicity, which lets the game focus squarely on its namesake.

In Screencheat, the actual ‘shooting’ is boiled down into its simplest form: you can turn around, walk, jump, shoot, and that’s it. Each weapon feels distinct and satisfying to use and, using a Pro controller or dual joy-cons, natural and intuitive. The Switch’s HD Rumble is used well and weaved through every aspect of the gameplay. Using a single Joy-Con, however, is worth a couple of paragraphs on its own.

Compared to the other control set-ups, using a single Joy-Con is very different. The left analogue stick still controls your movement but the player’s direction and turning is controlled by a mix of the face buttons and the Joy-Con’s motion controls. B and X (or the left Joy-Con equivalents) turn you left and right, A (bottom face button) jumps and Y (top button) resets your camera to face straight ahead, essentially leaving motion controls to control your up and down direction. It’s an unwieldy but surprisingly elegant solution once you have the hang of it, but it’s best as a self-imposed handicap.

No matter what, playing Screencheat with a single Joy-Con is a cramped and clumsy mess where you can barely control your direction let alone aim your weapon. It’s phenomenal. Especially for playing against folks who either don’t game or barely game at all, using a single Joy-Con keeps the experience a chaotically fun, loud, fumbling mess of an even playing field. 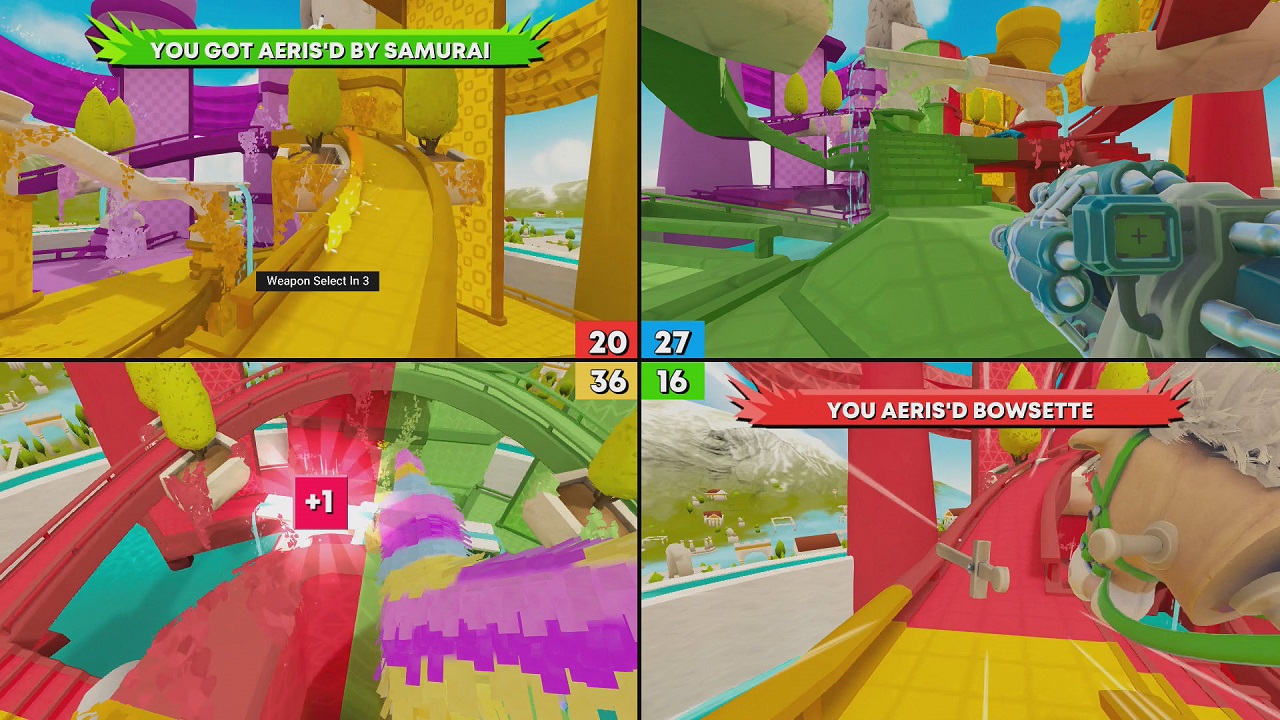 With this Nintendo Switch port, Screencheat: Unplugged also sees a major upgrade in visuals and audio, updating the entire aesthetic to capture an eccentric, attractive party feel. Samurai Punk has given its title a brighter, more vibrant and eye-catching look, each map, weapon and ragdoll overflowing with loud, saturated colour. Sound effects pop, energize and motivate – exactly how you want it – and the light, fun vibe of the new jazz-infused electro soundtrack matches the manic energy of the game itself. Aesthetically, Unplugged is pitch-perfect.

Unplugged also includes a bunch of single-player time trials, which are a fine distraction if little else. They’re brief little tests of your screen-cheating skills that award very little EXP towards that next unlock, regardless of how successful you are.

On that note, if Unplugged gets almost everything right, it’s the snail-paced progression that almost kills it. 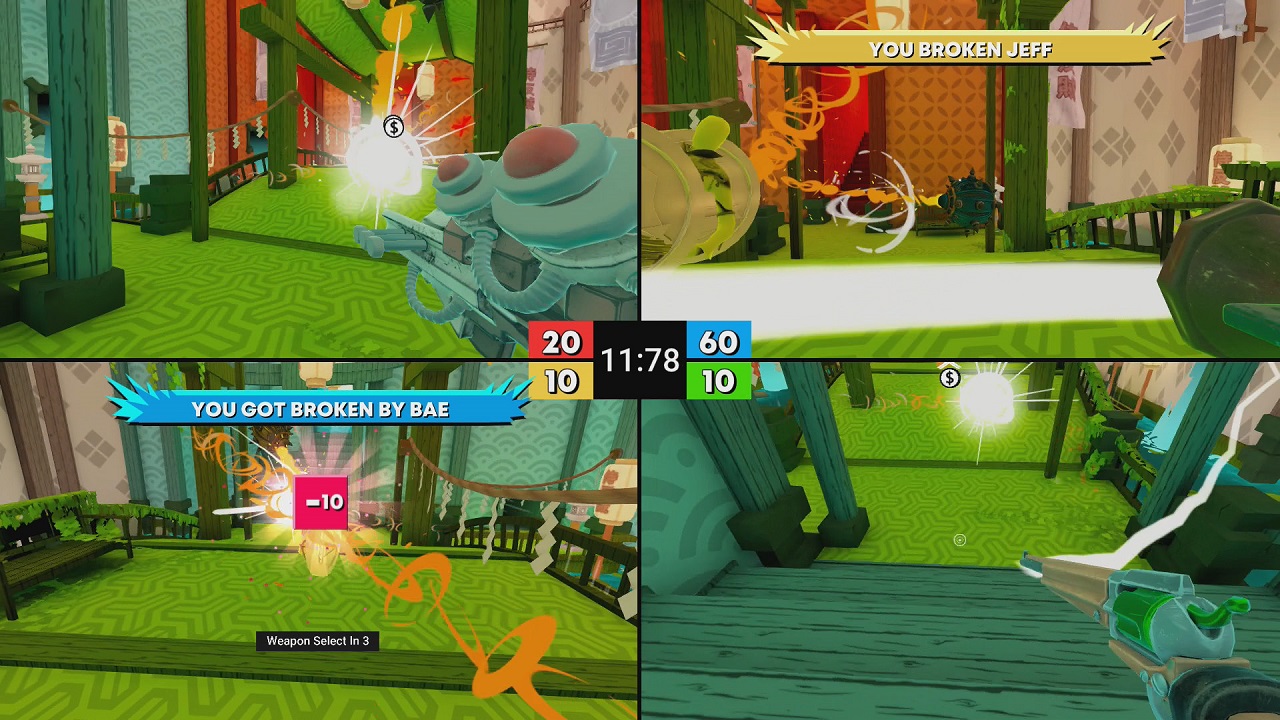 Unlocked over time, there are ten unique weapons, 11 maps and nine game modes – the usual types like deathmatch and king of the hill with a few creative modes like ‘Murder Mystery’ and ‘Bombs Away’ – plus 17 ‘mutators’ to add some spice to each mode.

Unfortunately, the tedium of unlocking all of this undercuts the entire experience.

Starting up Screencheat: Unplugged, you have access to the mode ‘My First Deathmatch’ (first to however many kills wins), the map ‘Museum’ and the Musket as the only available weapon. As an opening, it’s a smart play and works well. It keeps things as simple as possible so players can get used to the controls and the screencheating, while also giving non-gamer players time to adjust. However, it’s a good idea taken to a ridiculous, self-defeating extreme as it turns into a slow-as-molasses odyssey expecting hours of play to unlock even half its content.

This progression system is obviously an effort to keep players returning and rewarded with content, which is a fine idea, but it cuts Screencheat off at the knee. After the first few matches, now standing firmly on your screencheating sea legs and ready for something a little more exciting to keep that high running, Screencheat unlocks a new weapon, map or mode – one at a time – every three or so matches. You’re drip-fed your ‘rewards’ so slowly that any excitement around them vanishes after the third level-up. 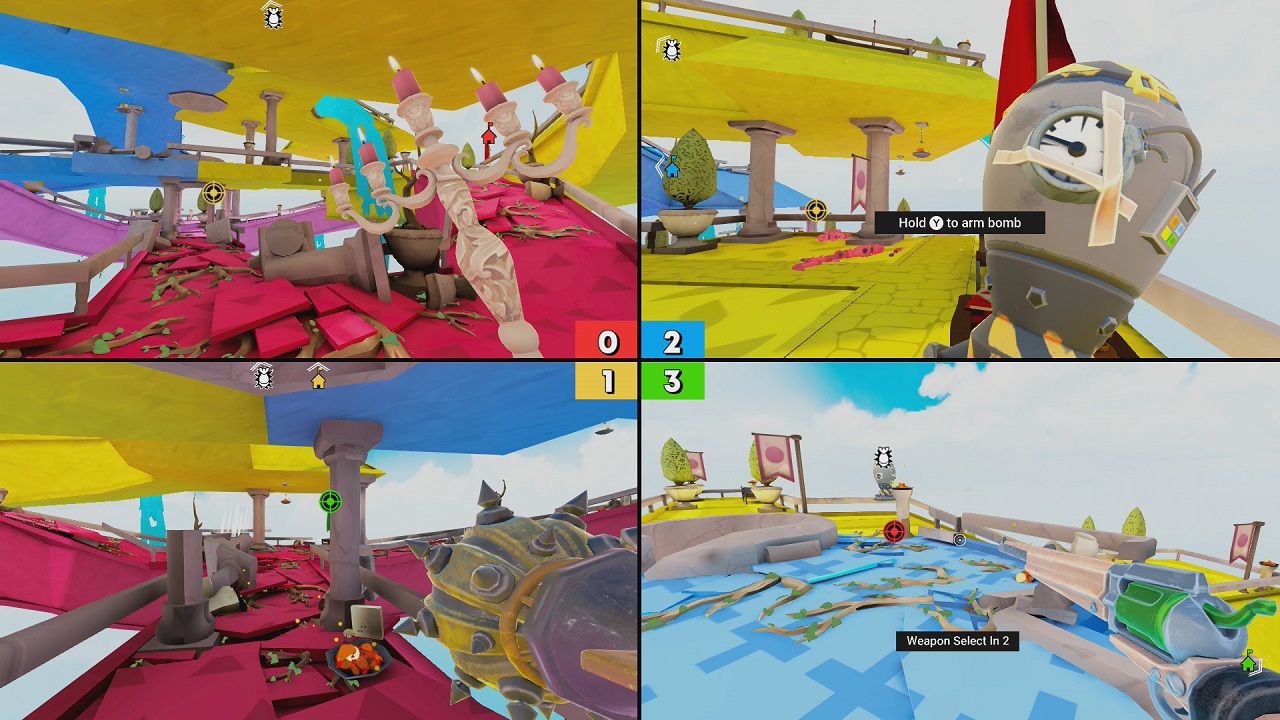 It’s worth noting that this system can’t even be cheated by lowering kill counts because it’s based solely on merit. Every kill in a deathmatch, or any action towards whatever objective, awards experience towards the next level (this including bot players). This actually discourages free-form party play; playing with either two or three players instead of the full four ends up slowing each level-up – each new unlock – from every three-ish matches to every four or five.

Especially as a party staple, Screencheat: Unplugged might not keep you entertained past a few rounds, seemingly unaware that there are other games to play (especially on a Nintendo Switch, the centrepiece of every spontaneous rooftop party).

I’d prefer not to go hard on Screencheat: Unplugged because it honestly gets so much right, but locking off the majority of the game behind such a slow progression system kills whatever addictiveness you want from a party game. It actually highlights how hollow the core gameplay is. Past a few rounds, Screencheat relies more and more on new content and twists to this central formula. Without this, it fizzles. There are options to create rulesets of your own and the game allows you to save specific rulesets under specific names and descriptions; as great as these options are, they’re only really for long-term play. Screencheat: Unplugged could use a system that’s essentially the opposite by randomizing unique rulesets match-to-match, accessing rulesets by other players, or even something like Mortal Kombat’s ‘Test Your Luck’. Picture starting with something like Halo’s Infection, then horses-only Hide-and-Seek, then muskets-only King of the Hill with low gravity, and so on.

Screencheat is strong on its own, and while you can randomize the available maps and modes, it’s sorely missing a system that jumbles everything together at a quick pace. It needs a system that keeps the game fresh and turns it into a genuine party staple. For now, Screencheat feels too neat and structured, unwilling to get weird and crazy and embrace the chaos the game channels so well at first. 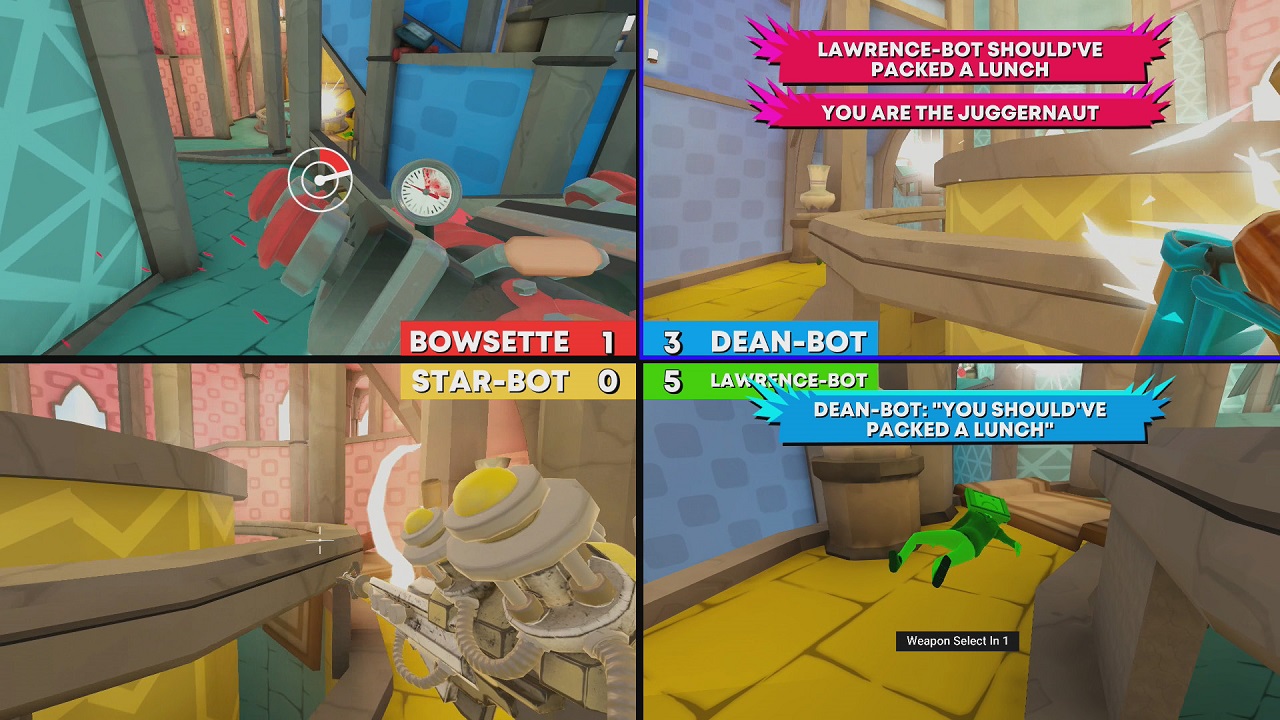 Screencheat: Unplugged is a well-made, polished and distinct party game that carves out its own niche among the already-stellar party game library on the Switch. Unfortunately, with progression issues that just underline the game’s shallow long-term play and a lack of online play (unlike previous versions, Unplugged is local only), it’s a recommendation that comes with a few major caveats.

Screencheat: Unplugged isn’t bad – far from it, actually – but locked-off content and straight-laced gameplay keeps it from party greatness.

[…] spent some time with the Aussie-developed Screencheat: Unplugged, a great game whose “locked-off content and straight-laced gameplay [keep] it from party […]