Sometimes an original idea crops up in gaming that is as perfect as it is unlikely-sounding. Before Devolver Digital released Nerial’s Reigns in 2016, for instance, few would’ve even conceived of combining the monarchic skulduggery of Crusader Kings with Tinder. Nevertheless, the game proved a huge critical and commercial hit, leading to this sequel a little over a year later.

Anyone familiar with Reigns will feel right at home here. It’s a game about decisions, made by swiping left or right. Whether enacting kingdom-shaking policies, or responding to seemingly innocuous tidbits of court gossip, every decision comes with its own consequences. These are represented by four popularity meters representing the Church, the people, the military and economy. Either depleting or maxing out any of these (with choices potentially displeasing one group as much as satisfying another) generally ends in one of several wryly ironic deaths, before you take on the mantle of the next ruler. 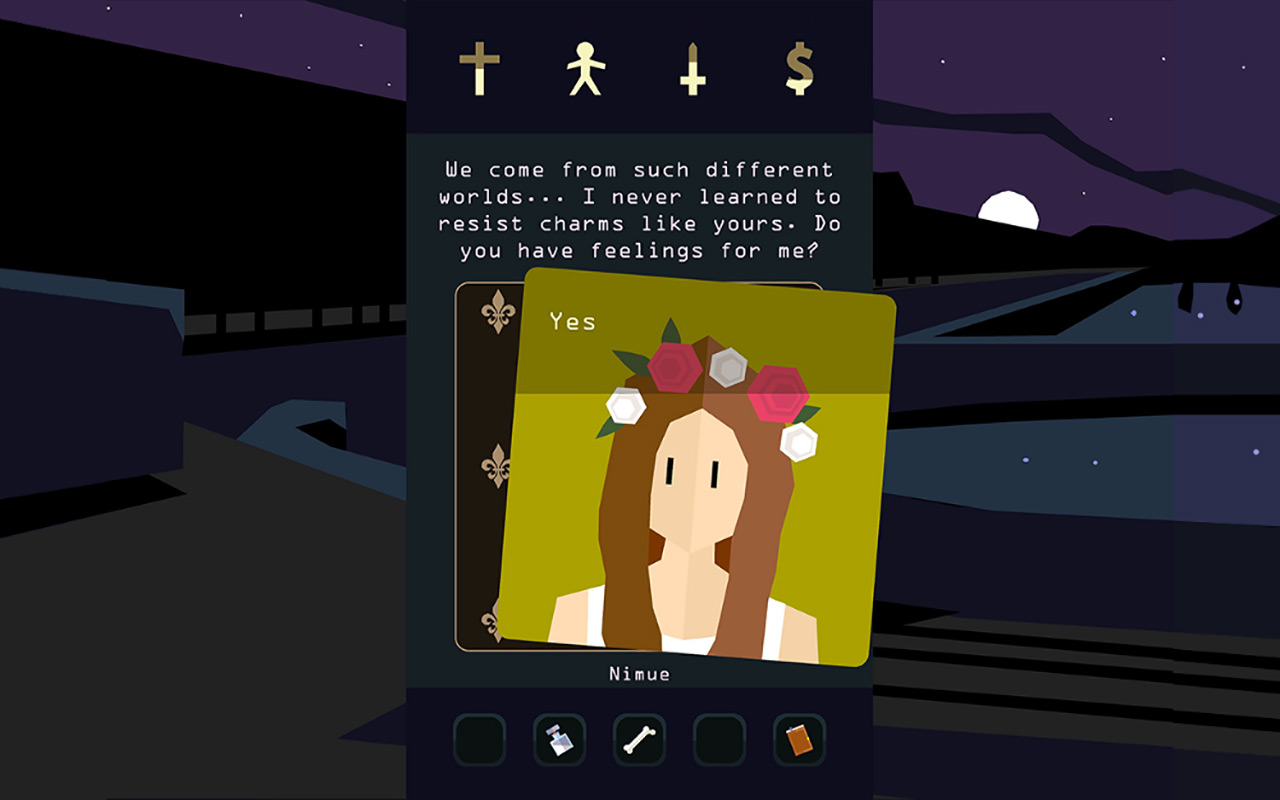 Like its predecessor, Reigns: Her Majesty is all about the grind. Players work their way through dozens of queens, slowly gaining card decks and options as they go to improve future queens’ survivability. For the most part, this is great fun — Nerial has clearly had a lot of fun coming up with a plethora of devious situations, from inter-institution feuding, foreign marriages and even a Pagan goddess making life ever more complicated (and brief).

As with the original, Reigns: Her Majesty bursts with quirky charm and some genuinely funny writing that mines a lot of material out of the paradox of being a capable woman in a patriarchal environment. As the title suggests, this time you’re the Queen, which means that your authority has to be exercised with a bit more subtlety than before. Issuing decrees is still your main activity, but this time you rely more on manipulating the game’s other characters to enact the changes you want. It’s a patriarchal monarchy after all, and a Queen’s authority is only supposed to be on paper no matter how useless the King tends to be, i.e. utterly. Doing the men’s jobs for them is one thing, but doing it too well will get you locked in a tower posthaste. 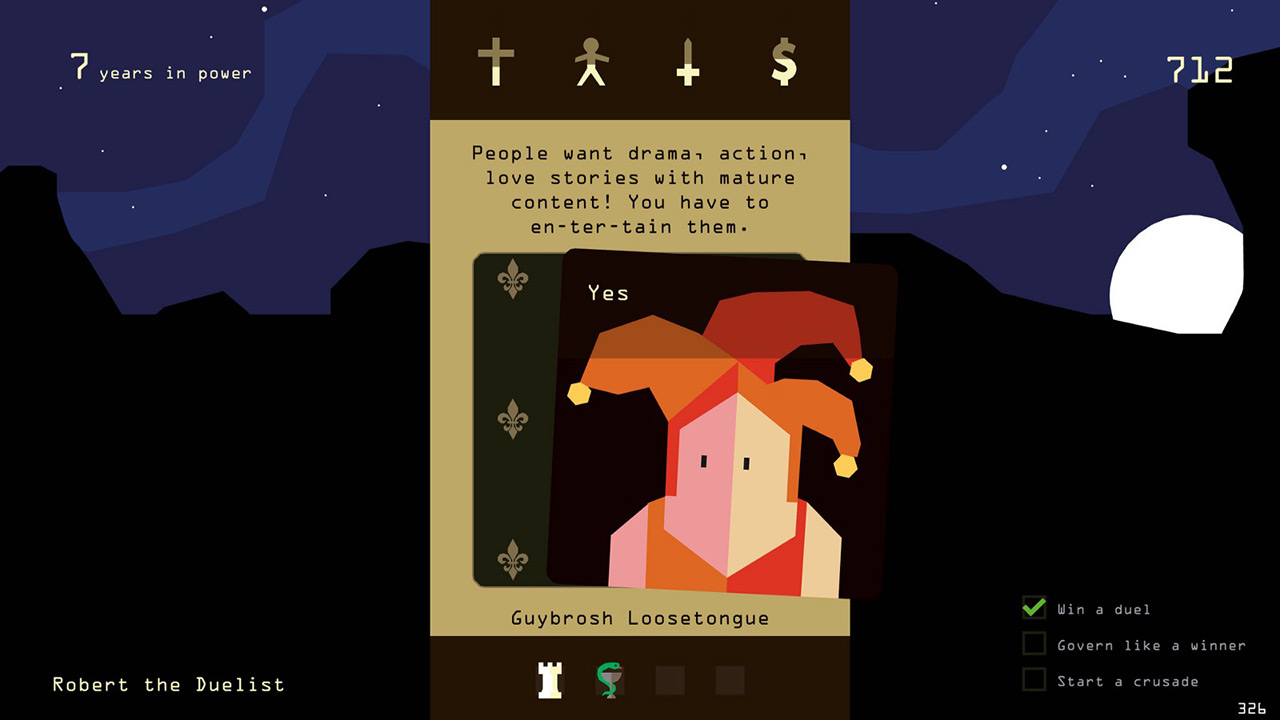 The UI is simple and straightforward, with the basic ‘swipe left/right’ mechanic being unambiguous in form, if not always in intent (depending on how oblique the game wants to make your choices). Players can click and drag the cards in the PC version, but this feels rather sticky and unresponsive; clicking on the left and right sides of the screen yields a far better response. The sound design is generally solid, with jaunty music and simlish-esque dialogue conjuring an appropriately whimsical tone. The graphics are a similar deal, with the angular, almost paper cutout Reigns style carrying on from the first game.

Reigns: Her Majesty does falter a bit with continued play due to its reliance on slowly grinding out extra depth in the form of new cards. Like the original it was clearly designed for mobile, and as such is perfect to play in short bursts. While we do get some overarching mystery elements, most strikingly in the Pagan goddess who seems to keep resurrecting the player and whose intentions are unclear, it takes a long time for these things to become clear and again, leads to a lot of repetition of scenarios with no clear direction other than what you can intuit for yourself, like an escape room which you can only see for a few seconds at a time. At the same time, the slow drip of new elements and the quite challenging achievements suggest that Nerial wants us to pour a large amount of hours into it.

The problem is that this is grinding expected from the player for not a huge amount of progression, at least for the first few hours. Deaths often come thick and fast, regardless of how carefully you play. While this fickleness feels very appropriate to the ‘ruling is hell’ theme, it can also be dispiriting. While the game gets a lot of satirical mileage out of the illusion of choice, its mechanics at the same time are defined by choice as the player’s primary act of agency. Reigns in essence relies on repeatedly showing the player that their choices are fruitless, while also needing to encourage them to keep making choices. It’s a tough balance that it doesn’t always get right. Consequently, it’s a very tough game to review because in order to get the review out in any reasonable kind of timeframe, you have to play the game in exactly the opposite manner for which it was designed. Certainly, the mobile version comes recommended over the PC simply because its gameplay suits a touchscreen far better.

Like the original, Reigns: Her Majesty is a fun diversion whose concept and form often feel a bit at odds with each other, a simple mobile game that makes the player wait a bit too long for the narrative depth to which it clearly aspires.