Dontnod delivers the best episode of the season

Last episode, Sean and Daniel escaped the police at their grandparents’ home in Beaver Creek and found refuge with a squad of young train-hopping drifters. It was a chance to sit and rest after weeks of exhausting isolation, camping out in a forest of giant Californian redwoods while they all, including Daniel, worked for a pot farm nearby.

Feeding their souls with friends, music and alcohol, slowly building up a nest egg for the rest of their trip to Mexico, Sean found himself comfortable for the first time in months and couldn’t help the growing distance between him and his younger brother. It was a quiet episode that bridged the first and second halves of the season, the midpoint of Life is Strange 2’s larger story that ended with a bang: a failed robbery, a house that was literally shattered apart – and Daniel gone.

Episode 4 jumps ahead two months later. Sean wakes up in a hospital bed with his head shaved, a patch of gauze over his now-blinded left eye and an FBI agent’s business card sitting on the table next to him. There’s a police officer guarding the door, and Sean is set to go to trial tomorrow over the events of Episode 1. 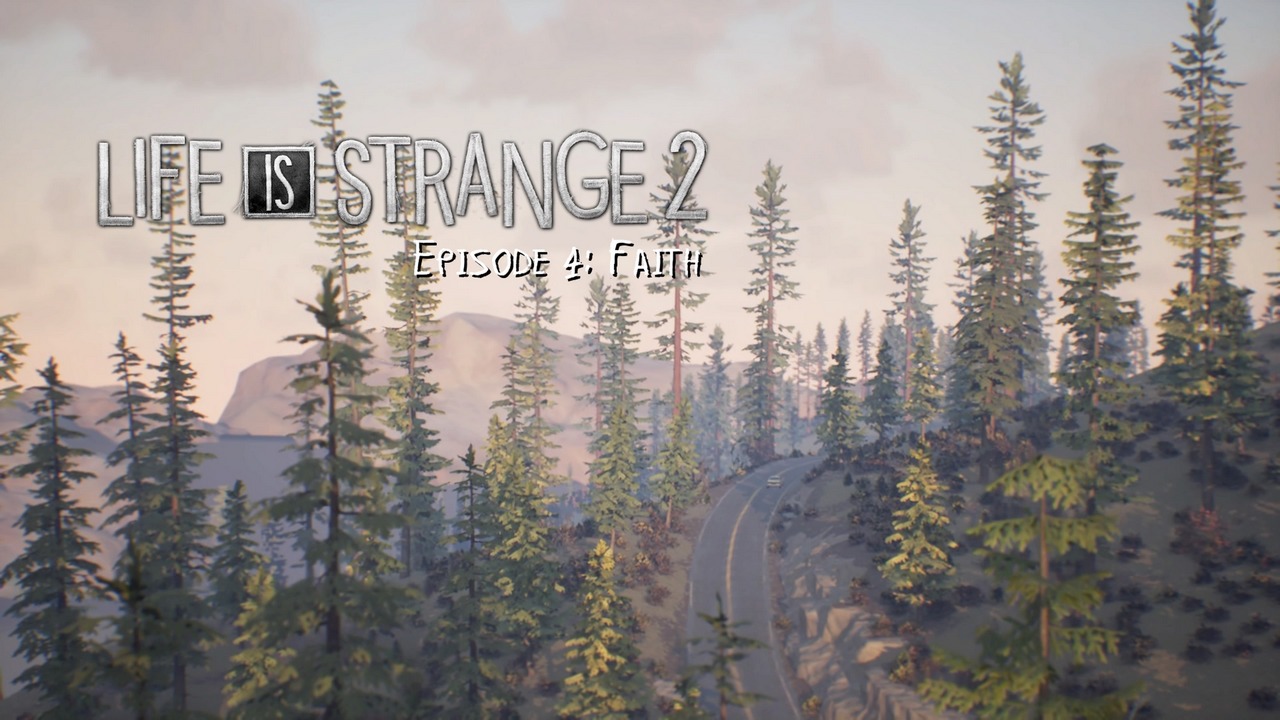 I love time skips so, ipso facto, I’ve loved Life is Strange 2. In most cases, they’re used as soft resets that can really draw you into the mystery of a new situation and hook you back into the story – like the abandoned cabin in Episode 2 or the forest campsite in 3 – while also giving you space to remember the details of whatever happened last time at your own pace.

Then there’s Episode 4. Its opening scene has the same stillness as the last two episodes, giving you the space to think and absorb your new surroundings, but it’s so immediately compelling and exciting and suddenly kicks the episode into high gear for the next two or so hours. Compared to the last two episodes, and closer in tone to the first, Faith just keeps heaping on the urgency and tension until the very end.

After chatting with his doctor Joey and the maybe-honest-but-probably-not FBI agent Elena Flores, Sean finally figures out where Daniel has been hiding out these past couple of months: at a small church in Nevada with Jacob, one of the drifters from last episode. Sean escapes the hospital (a solid adventure game-style escape room that I personally loved) and hotwires a car in the parking lot. After driving for days and pulling over for a rest, he’s suddenly confronted by something I almost forgot about: the Diaz brothers’ Latino identity and how it twists the world around them, which I originally thought would play a bigger role this season.

The first episode, Roads, both opened and closed on the Diaz brothers’ ethnicity – and not just being outlaws – as the most dangerous part of their trip. The tragic first scene where their neighbour threw racist taunts at Sean and his family, where a panicked police officer shot and killed their father (which is impossible to detach from the country’s issues with racially-motivated police shootings, even if he isn’t specifically black), and at the end when a bigoted gas station owner recognised the brothers and plays vigilante, violently imprisoning Sean in the back of his store and calling the police. Even talking with random passersby felt risky or even dangerous, suggesting that there’s be a lot more of this throughout the season. I brought this up in my review of the second episode too, but focused on my own awareness of their Latino identity and how it influenced me as the player – in actuality, it didn’t have much impact on my actions or consequences.

The reason I’m bringing this up again is because, when Sean stops for a rest on the side of the road, the cartoon racist shows up again. A drunk and his younger brother wake Sean up in the middle of the night and harass him for what feels like an hour, pushing to either let himself be humiliated or be attacked. The drunk notices that the car’s been hotwired, mistakes his medical supplies for drugs, digs through his backpack and threatens Daniel’s toys – it’s a dangerous situation. 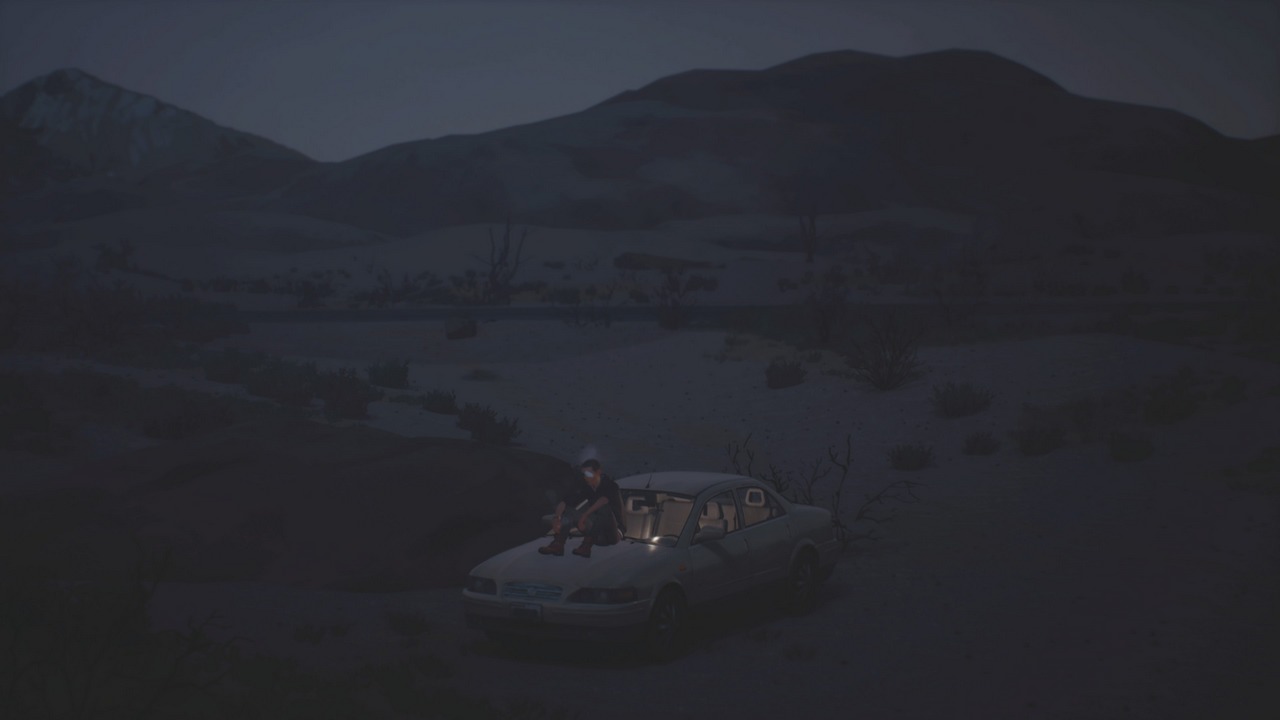 It’s a blunt, uncomfortable sequence that plays on your pride as the player, and it works fine, but the absence of more scenes even slightly like this, more moments that centre around their Latino identity and how it changes their experiences, really undercuts whatever substance it could have had beyond the obvious. It comes off as shallow shock-value spectacle instead, a slice of overwrought danger and discomfort instead of the grotesque social horror it (and the rest of the game) could’ve been.

I pictured a game where you had to constantly balance your guardianship of Daniel with the potential threat of almost any interaction, weighing the risk of certain actions with the genuine danger of emboldened bigots gnawing at the back of your mind. Themes of brotherhood, family and individual identity take focus instead, and understandably so, but it’s disappointing that this topic wasn’t explored with the same nuance and delicacy as everything else.

After escaping the racist guy, Sean arrives at the Universal Uprising Church in Haven Point, Nevada. Sean watches Daniel during a midday sermon and sees how he’s been deified as a miracle and exploited by the pastor Lisbeth. She’s framed his telekinetic powers as divine evidence of God for her devoted flock and brainwashed a lonely, vulnerable Daniel into believing it as well, having convinced him that he has a new family now. After Lisbeth’s lackey violently ejects Sean from the sermon, the brothers’ mother suddenly appears and we head into the wackiest objective of the game by far: to save Daniel from an evangelical cult with the help of your Sarah Connor-like mother, Karen.

It doesn’t play out quite as bad-ass and action-movie as that sounds but it does lead into the best scene of the season: a sombre conversation between Sean and Karen after a decade of total silence. 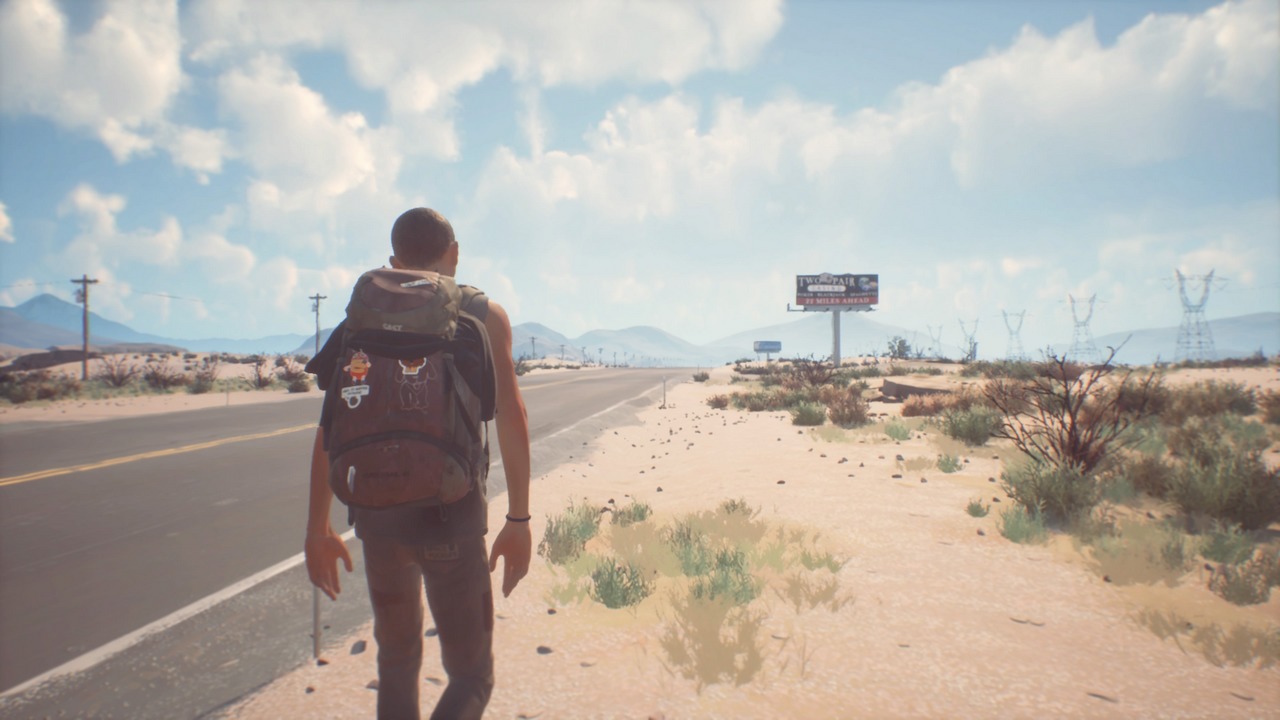 The obvious (and incorrect) prediction was that Karen would also have powers and that she left the family to avoid causing the sort of accident that Daniel eventually would, but the real reason is far more ordinary than that. It’s dull, unsatisfying and deeply human: Karen couldn’t keep living in the stereotypical family roles she’d chosen for herself, that she couldn’t keep trying to “fool herself” into being the person she simply wasn’t.

That’s it. No grand twist. No key to happiness. Karen’s frank explanation doesn’t fill the gap in Sean’s heart; it’s just an honest, realistic answer with no actual bearing on Sean himself – and that’s what’s so incredible about it.

What this scene does, especially this far into the game, is let the player channel their own reaction without losing Sean’s perspective. The conversation is framed as a major moment in his life, a potential turning point before he goes and lives out the rest of it, but it’s the player who is given a clear breakdown of Karen’s actions, her reasoning and her impact on Sean and his family.

It falls in line with the theme of individuality in spite of circumstance and expectation – a juxtaposing anti-climax – but it also builds on your ongoing connection to Sean. It lets you guide and channel whatever sort of catharsis (or lack of) that you feel is most appropriate to Sean’s development and your own take on Life is Strange 2’s story. You can be empathetic and forgiving (when possible), you can be prickly and hostile, or you can even ignore Karen and her attempts to connect entirely; each is a totally valid approach that stays true to Sean’s personality and emotional wellbeing.

Admittedly, it’s hard not to be sympathetic when you’re given the choice, and this is an issue both here and throughout the rest of the episode. Earlier episodes did a good (and from what I remember, better) job of giving you a more horizontal and varied range of dialogue choices, options that offered different angles on a conversation instead of Mass Effect-style “be nice or be mean’. Dialogue is still a high point in both this episode and the game overall ­– the talk with Sean’s mother really is phenomenal – but it’s a problem that can undercut the naturalistic tone and demeanour that the game pulls off so well otherwise. 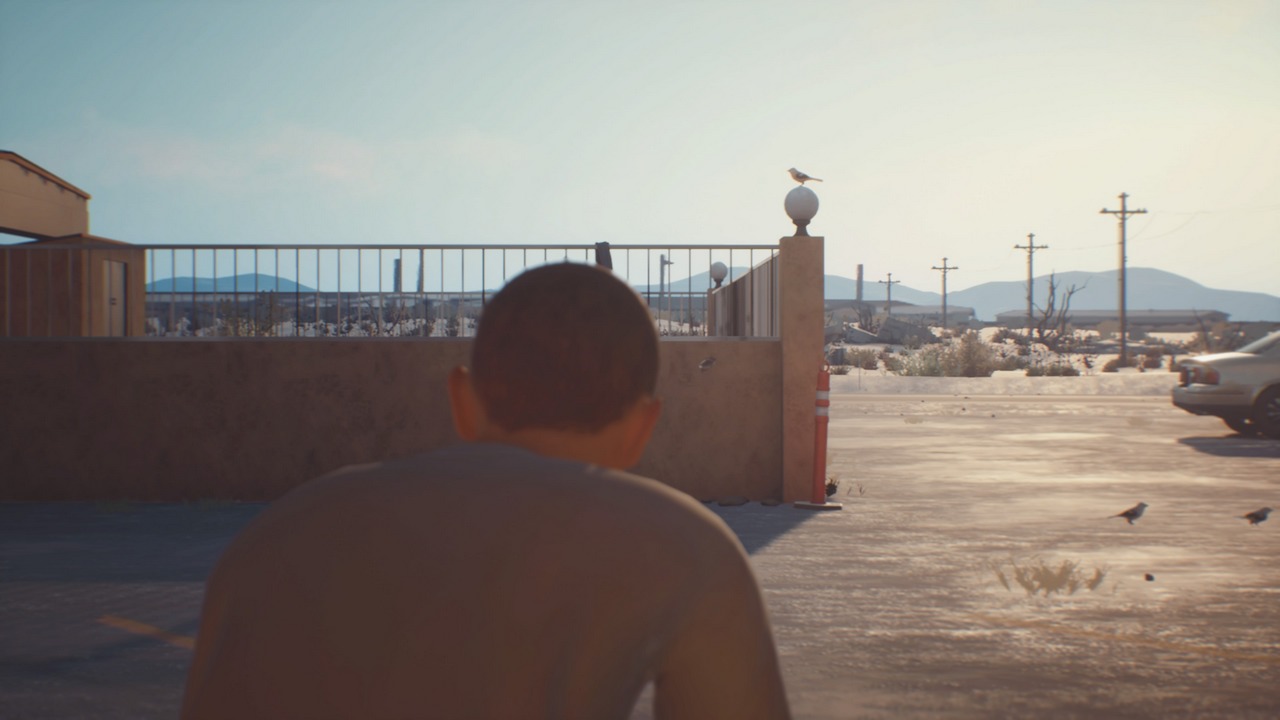 As the penultimate episode of this season, Faith’s climax is a genuinely moving culmination of everything that’s happened so far. A fight between Sean and Lisbeth for Daniel’s soul inside a burning church is a tad dramatic, sure, but the core is strong. Sean desperately tries to prove Lisbeth’s hypocrisy to Daniel, Lisbeth’s dominating charisma preys on Sean’s own mistakes with his brother, and Sean throws himself into Lisbeth’s lackey just to get beaten down by the butt of his pistol again and again, urging Daniel to make his own decision.

It’s intense, stressful, emotional and, despite the wacky cult plot (which really does undercut some of the seriousness, at least a little), felt like an honest resolution to my version of Sean and Daniel’s journey. It’s not just about how Daniel’s absence impacted and changed Sean in the last two months or so, but how Daniel is so vulnerable without his older brother. Even with superpowers, Daniel still needs his brother to stay afloat; even with his newfound maturity and survival instincts, so does Sean. 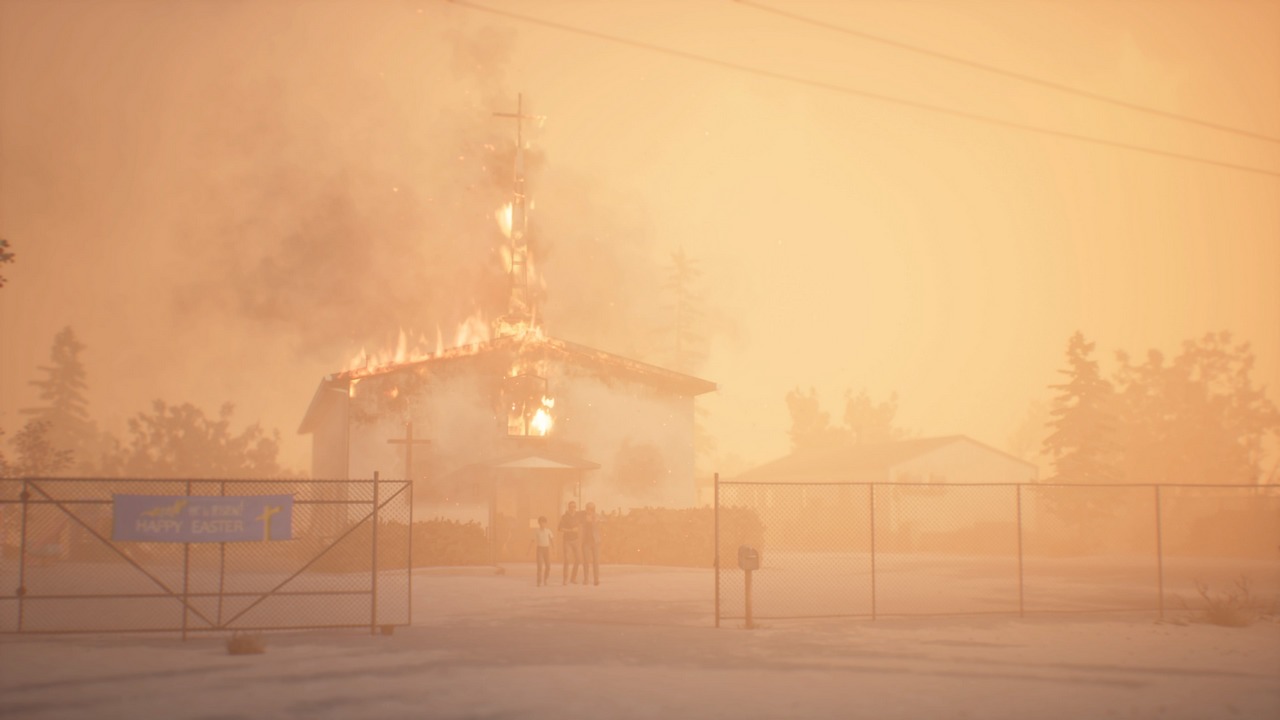 ‘Faith’ is a clear high point for the season that brings its threads together in a moving and satisfying way, setting the stage for December’s finale.

[…] Where Episode 4 was the exciting rescue mission from a crazed preacher that drove Sean to his lowest…, Episode 5 is where you look back on what you’ve achieved so far. It dwells on Sean and Daniel’s bond, how it has strengthened throughout all the hardship and trauma and how valuable that experience and growth has been, especially to Daniel. By doing so, Wolves prepares you for the final stretch to the US-Mexico border wall and the difficult choices you’ll face when you get there. […]