A fun adventure lacking in substance

After a painfully long wait, the next numbered entry in the Kingdom Hearts franchise has finally arrived. Unfortunately, despite a solid battle system and many quality of life upgrades, Kingdom Hearts III fails to lose many previous games’ trappings. 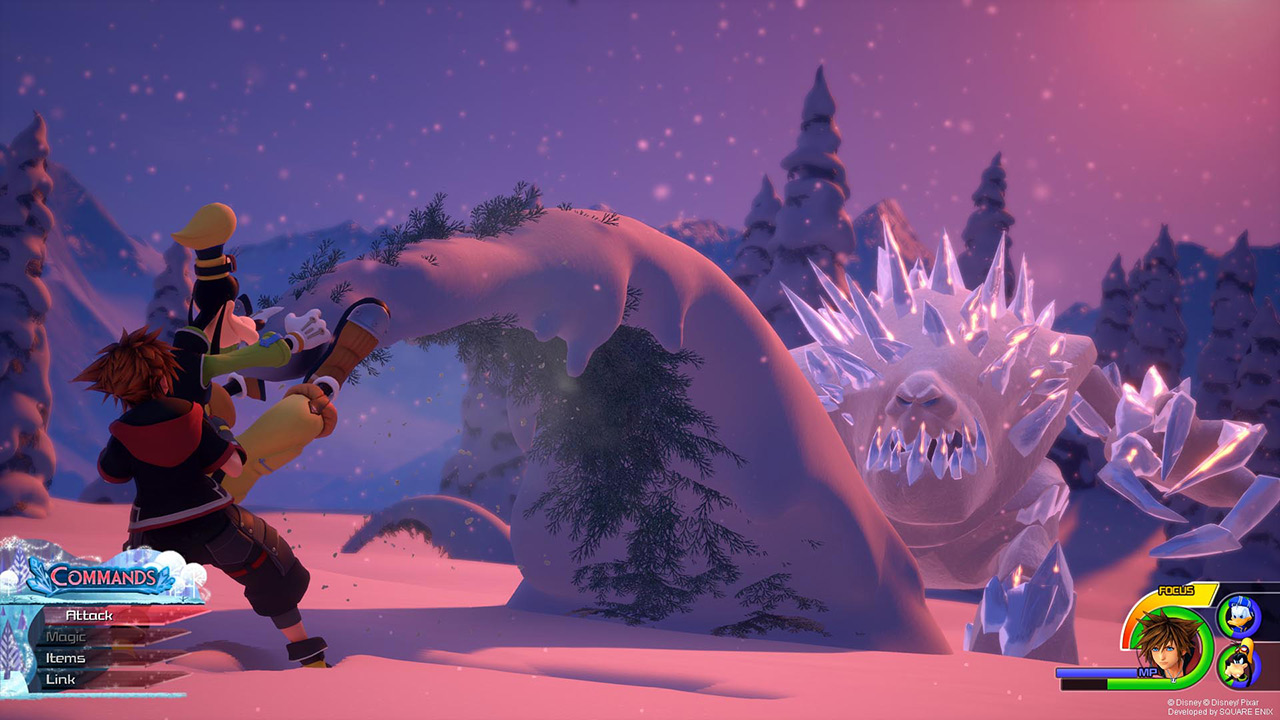 Square Enix builds on that foundation by adding a variety of new techniques, the most prominent of these being “formchanges”. When activated, Sora gains access to a variety of new abilities depending on which keyblade is currently equipped. For example, the Kingdom Key (the game’s first keyblade) allows Sora to access Second Form, giving him abilities and special moves from Kingdom Hearts II. Formchanges add a new layer of experimentation and personalisation to combat and are an absolute joy to use, while also being visual marvels.

In addition to these formchanges, Kingdom Hearts III gives Sora the ability to equip three keyblades all at once and switch between them at any point, even during a combo. This means that you can access three different formchanges at all times, allowing you to adapt your playstyle to a variety of situations. As a complement to this, the new keyblade forge allows the you to power up your keyblades using materials found throughout your journey. This prevents older keyblades from becoming weak stat-wise, and lets you continue to use keyblades with alternate forms that you enjoy even if more powerful weapons become available. 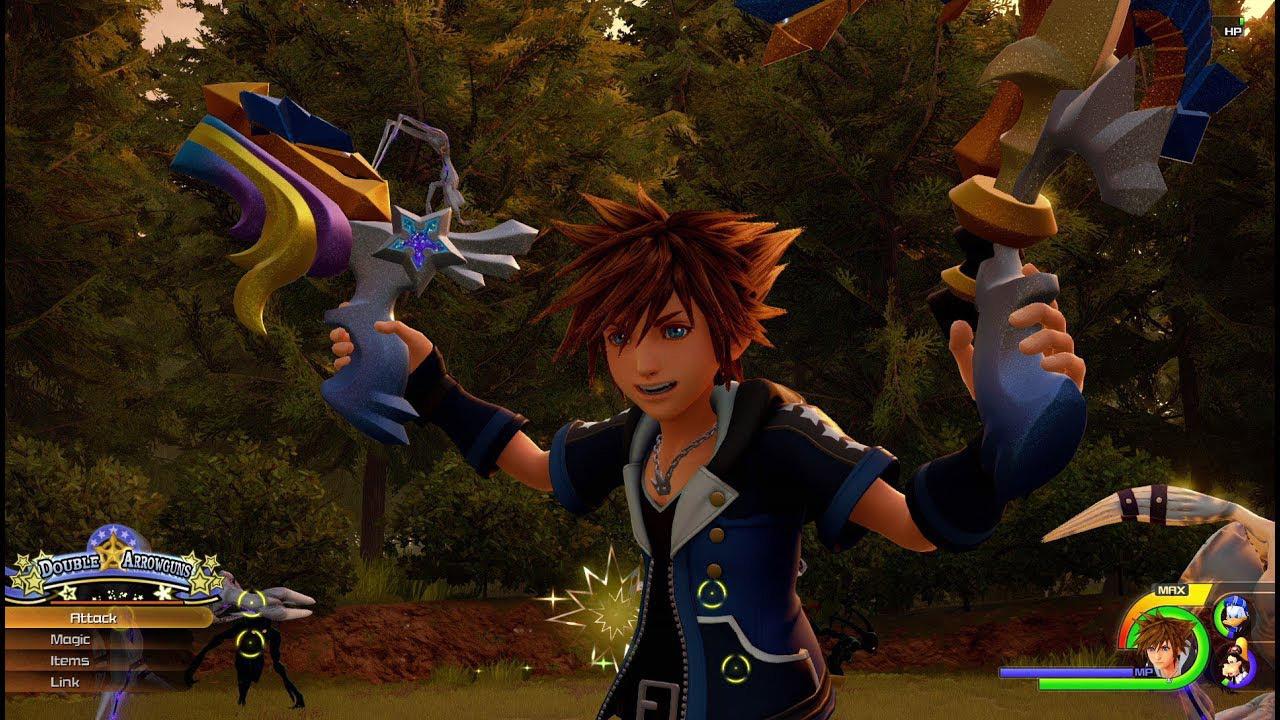 Kingdom Hearts III also introduces two new mechanics to further enhance the series’ combat: Grand Magic and airstepping. Grand Magic is a powerful spell that Sora can unleash after using enough magic attacks, and is a great way to add flair to battles while simultaneously dealing heavy damage. Behind formchanges, airstepping is  my favourite new addition to Kingdom Hearts III. It allows Sora to instantly zip to either specific terrain objects, or to enemies. Using it for exploration felt somewhat like an afterthought, as it is only used in a few worlds and becomes mostly irrelevant once the glide is unlocked, but airstepping truly shines when you’re in combat, where you can use it to quickly follow up on attacks and create some very quick, satisfying combos.

Other miscellaneous combat mechanics include team-up attacks, which allow Sora to unleash a powerful attack with other party members, links, which can be used to summon various Disney characters to aid in combat, and attraction flows, where Sora summons various Disneyland rides. These tended to be underwhelming: the attractions are thrilling and visually impressive at first, but their common appearance and lack of variety means they become tedious to use in a short time; links feel forgettable, much like previous games; and team-up attacks can be fun to use, but it depends largely on the attacks. Some, like Donald’s meteor, are quick bursts of damage that can be great to use in almost all battles. Others, like the Trinity Shield, are painfully slow and drawn out, and feel useless when simply using basic melee and magic attacks is typically faster. Fortunately, they are by no means necessary, so they can be completely ignored. 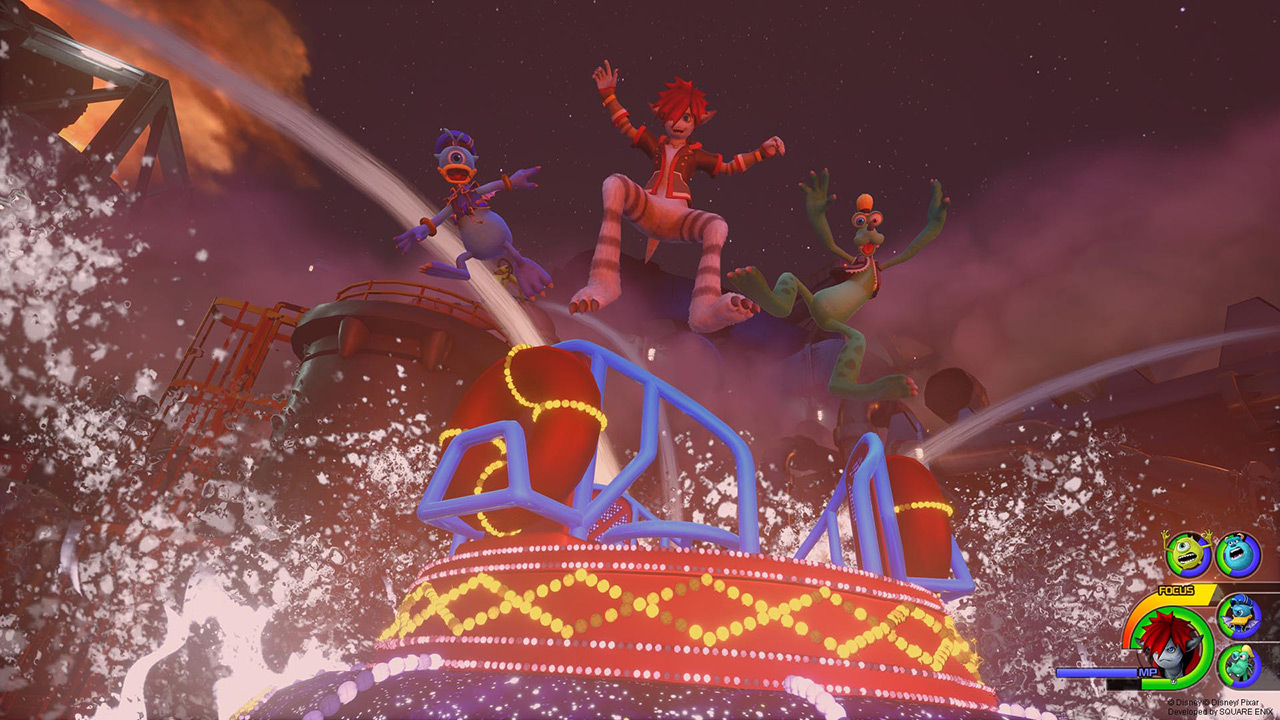 These changes and additions to combat create a battle system that is fast-paced, visually impressive and a joy to use, but it’s sad to note that the game does not take full advantage of this system. As we’ve come to expect from Kingdom Hearts, regular enemies don’t pose too much of a threat, but Kingdom Hearts III has gone one step further: even the majority of the boss fights are incredibly easy, which in turn makes them quite forgettable. It almost feels as if Square Enix gave the player all of these powerful new abilities, but forgot to make the enemies any stronger.

The game also falters outside of combat. The mini-game selection is pitiful, with most being uninteresting time-wasters. The game also introduces Lucky Emblems, hidden Mickey Mouse symbols scattered across every world that Sora can photograph to obtain items and unlock the game’s secret ending. Due to their seemingly random locations and the lack of a suitable radar with which to find them, I found hunting for Lucky Emblems to be the worst part of the game; it was little more than a chore, and I stopped searching as soon as I’d found enough to unlock the hidden ending. 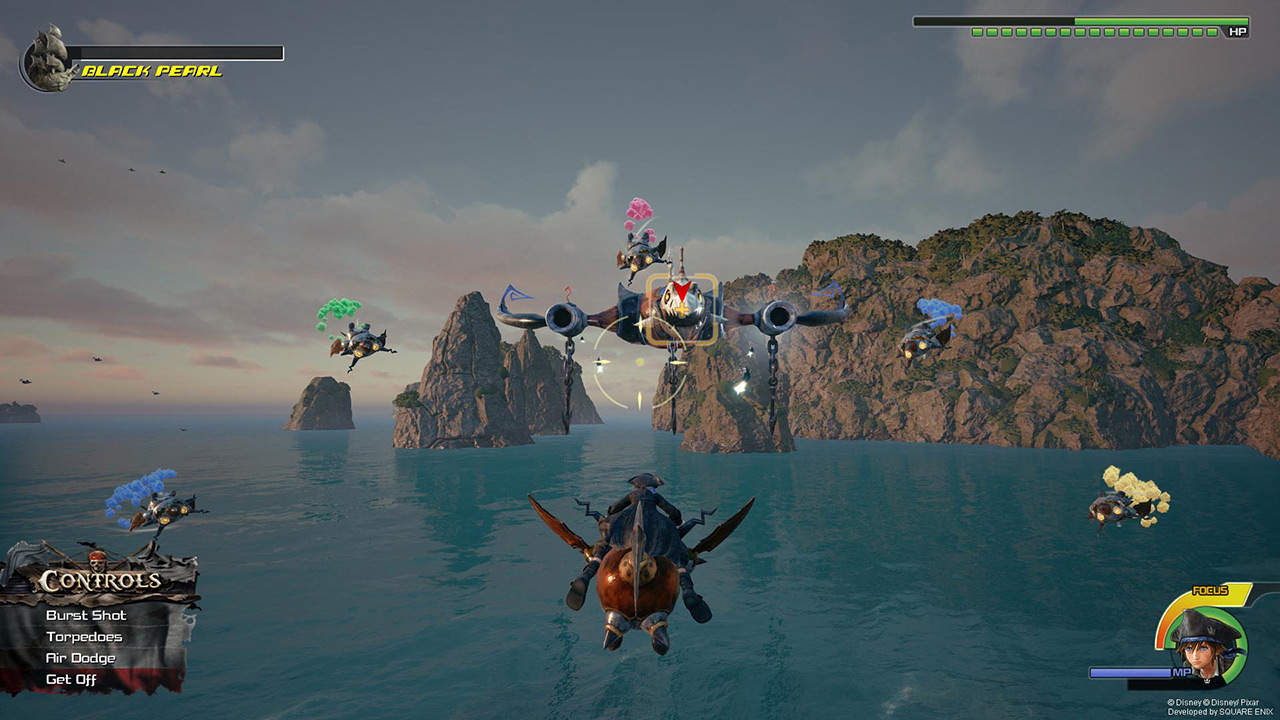 Furthermore, certain worlds feel unfinished, specifically the returning Twilight Town, which is incredibly lacking in content and variety compared to Kingdom Hearts II, and the 100 Acre Wood, which is simply one room with three mini-games that are all just slight variations of the exact same game. This apparent lack of effort and finishing touches renders these worlds  incredibly underwhelming.

Fortunately, the other worlds were some of the best in the series. They all manage to feel unique thanks to the use of more modern Disney films as source material, as well as the inclusion of Pixar-based worlds. The game also does a fantastic job of intertwining the series’ main plot with the Disney-based subplots. Where in previous games these subplots felt unrelated to the overall quest, in Kingdom Hearts III Sora’s actions in these worlds have a direct connection to the plot. It makes travelling through these worlds feel more like part of one big adventure rather than a series of smaller adventures. One cause for disappointment, however, was the confusing absence of Final Fantasy characters. Moogles once again return as the game’s shopkeepers, and the story does reference some other characters, but the player never actually interacts with any of them; instead, they’re replaced with original characters who aren’t connected to Final Fantasy. It is not a major drawback, but for a series originally marketed as a Disney and Final Fantasy crossover, losing half of that is quite strange, especially as a person with more nostalgic attachment to Final Fantasy than Disney.

Ultimately, for everything Kingdom Hearts III does well, something else ends up feeling disappointing or lacklustre. The combat is fantastic, but there are not enough challenging encounters to make use of it; transformations and airstepping are amazing additions to combat, but attraction flows are uninteresting; the worlds are incredible, but the minigames are stale; and the Disney representation and references are near-perfect, yet almost all connections to Final Fantasy have been cut. Since these flaws counteract all of its positives, Kingdom Hearts III never reaches its full potential.

When Kingdom Hearts III is good, it’s fantastic. The combat is thrilling, the worlds are (mostly) fantastic and the game looks incredible, from its dazzling particle effects to its most simple of environments. Unfortunately, at its worst Kingdom Hearts III is a tiring test of endurance. It was, overall, a fun adventure, but one not worth replaying for some time.

[…] contributor Zack Goutzoulas made his Doublejump debut by reviewing Kingdom Hearts III, which he found to be “a fun adventure, but one not worth replaying for some […]

[…] III a miss, because like I said in my review earlier in the year (the first article I ever wrote!) when it’s good, it’s really good. It just isn’t good enough most of the time to call it the true hit it really should have been. […]

[…] Kingdom Hearts III first released, I found it a fun, if shallow, adventure that had excellent combat mechanics and plenty of options for the player, but didn’t actually […]