“I need to refill my paint roller.”

You know that feeling when you have a project that you’ve been wanting to do for the longest time, never got around to starting it for financial, mental or motivational reasons, and decided to live out your fantasy of renovating your own home the way you want to in The Sims? Anyone who does also has memories of relaxing music, matching colour swatches with the carpet or tiles, and typing “Motherlode” into the console when you’ve run out of money. Empyrean Games, the Polish developer of the early access title House Flipper, has turned that feeling into a reality with the very first house renovation simulator.

House Flipper is a condensed look into the cockroach infested, seedy underbelly world of real estate and property management. The game runs you through the fundamentals of renovation from painting and plastering, to the unspoken horrors of cleaning up an ex-party house, or worse, the remains of a crackhouse. Puddles of sick and fecal matter, strewn from wall to wall, and covered on the furniture and debris littering the roach ridden floor. This is par for the course for a former property manager such as myself, but Empyrean also knows exactly how to dial up the comedy to counteract the more disgusting moments.. When you purchase one of the beautiful, expensive two-storey houses later in the game for your own portfolio, you inspect the house and find no dirt or mess; instead, you find the remains of what appears to be a murder-suicide, with blood-stained, overturned furniture. All the while, you’ve gotten into such a routine that you just whip out the mop and start cleaning up the evidence without a second thought. 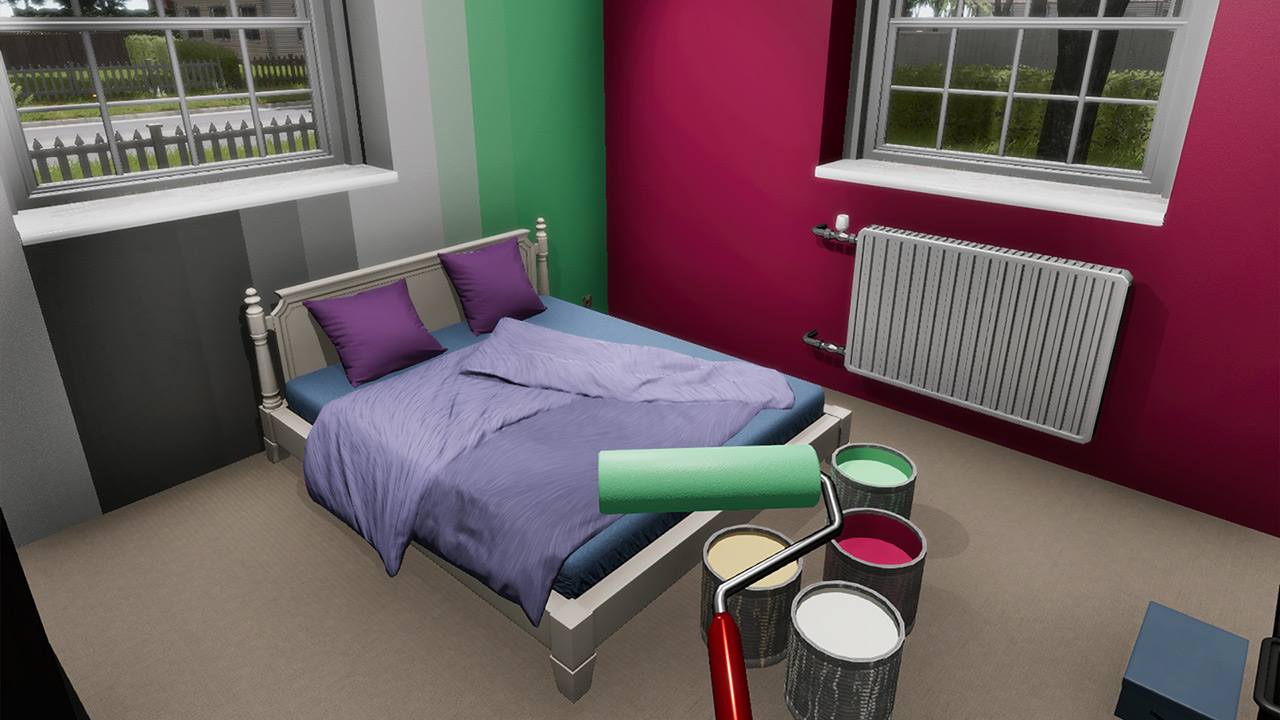 Before you even get into the house flipping market, though, you need to do general repairs and installations for people in the neighbourhood, from installing radiators, to a complete interior repaint. Each job nets you new skills, skill points and money, to make you more efficient at flipping houses when it comes time to do so. This, unfortunately, is where the game’s first major issue rears its head. At a certain point in the game, you have netted enough skills and skill points from repairing people’s houses, that you become a Super Saiyan House Flipper, buying, renovating and flipping houses in sometimes under 20 minutes. The challenge disappears pretty early in the game, especially considering that players with enough skill points can paint walls without moving the furniture in front of them, without damaging said furniture at all. All of the tedium, all of the challenge and all of the frustration that comes with painting a house erodes as the player gets further into the game, leaving a very straightforward, uncomplicated task; anyone who’s watched more than half an hour of HGTV knows that that’s simply unrealistic.

If Empyrean really wanted to give the concept of painting a house a realistic tedious twist, it would have been wise to implement a random number generator that decides whether or not you’ll damage the furniture when you leave it in front of the soon-to-be painted wall. The same goes for installing showers, sinks, toilets, washing machines, and radiators. In my years of experience as a property manager, I never saw a house completely fitted with no complications – there was always a broken screw thread, or something that didn’t look like it did on the website, or just something to complicate the process. In House Flipper, however, there are no such failures or complications; everything goes off without a hitch. Empyrean, please, if you want to put together a realistic simulation, you have to make the game a little more tedious. People remember the tedious parts of certain events more than the parts that just gloss by on a passing moment. 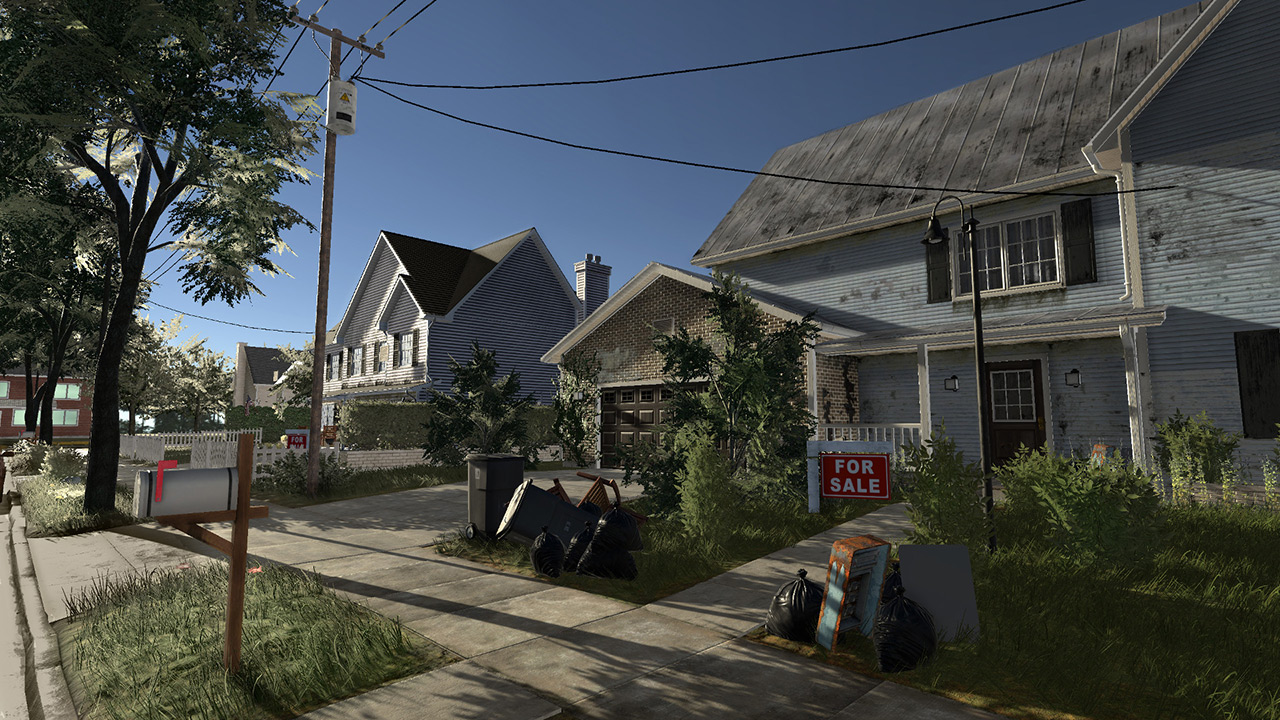 When you finally start selling houses, you have to cater to the needs and whims of the psychopathic customer base, all wanting and needing different things. One such customer wanted a house with a lavishly decorated hallway and office filled with bookcases for documents, but the rest of the house furnished as cheaply as possible. Another required a house with a fallout bunker in case of total nuclear annihilation (luckily there was one on the property). Another wanted a house with a bedroom and two bathrooms, but no kitchen. That’s where the game’s second major flaw appears: most prospective buyers are looking for two bathrooms, but the game doesn’t allow you to build a second bathroom if the plumbing isn’t already there. Since that’s the case with most of the houses you’ll find, a huge number of customers end up submitting low-ball offers because they couldn’t get something that was physically impossible.  In the long run, though, money is never a problem. In the more expensive houses, Empyrean leaves little easter eggs that can be sold for huge amounts of money, and players who build their negotiation skills early on can haggle successfully to raise the customer’s initial offer by at least 10%.

Having clocked the game after 26 hours, I can say with confidence that at least 10 of those hours were repetitive jobs using the same gameplay over and over. As much as that sounds like a crack at Empyrean’s expense, it’s more of a testament to the potential this game possesses. The opportunities for a game like this could be endless. Expanding out of one neighbourhood to numerous, with real-time stock and housing market spikes and crashes, comparing prices and hiring real estate agents to sell your houses, setting up rental properties with incremental revenue streams and occasional repairs required is just an amazing experience. I’d love to be able to hire services like pest control, and for the game to include more than just cockroaches. Hiring apprentices to do several different jobs with varying success rates would be another interesting twist to the game, giving it more of a managerial feel like in Assassin’s Creed: Brotherhood.

The options are virtually limitless and Empyrean could create something really awe-inspiring with this game. The game in itself is a fun way to relax and spend some time in a creative way. The comedy is well balanced and subtle, and the house variants are different enough that you won’t go insane too quickly. House Flipper is a fantastic proof of concept.