A watercolour picture that paints a thousand words

When I first saw GRIS’s trailer a few months ago, all I could think was that, even before I knew anything about it, it was one of the most compellingly beautiful games I have ever seen. The first thing that struck me was the distinctive art style used to create this mysterious young girl and the surrounding game world. It looks like nothing I’ve seen before in a game. GRIS is basically a living, breathing watercolour world, and it is a style that will certainly attract those who can appreciate the digital art form.

GRIS is a puzzle-platformer from Nomada Studio, published by indie giants Devolver Digital. The game involves the titular character traversing a world devoid of colour, collecting orbs of light that unlock new areas. The lack of colour appears to be symbolic of the anguish and despair in this young girl’s life, which is further evident in the game’s title – gris is Spanish for grey. The colours in these settings begin to get richer the further you progress. Reds come in as Gris approaches the clouds, greens represent the nature sections, dark blues and shadows are used for the underwater sections, and so on. 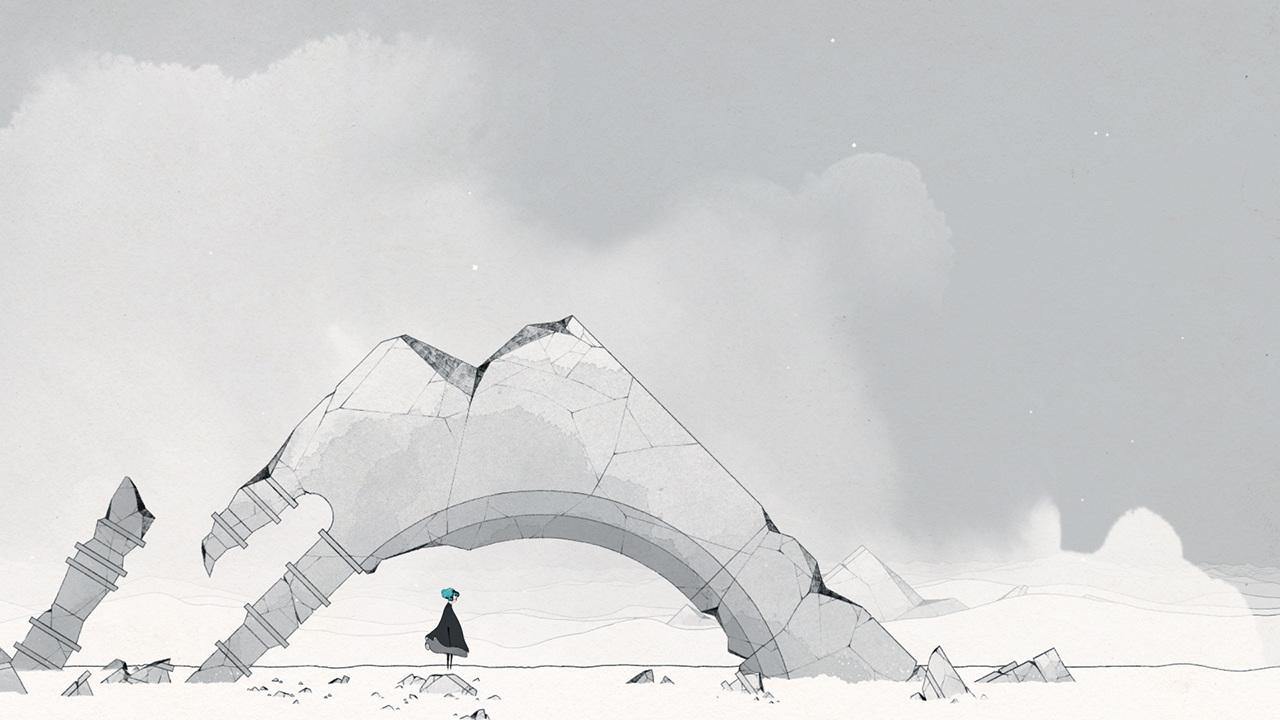 GRIS starts off in a world of grey, reflecting the despair in the young girl’s life. Only through her journey does her world begin to fill with colour.

GRIS’ platforming mechanics are brilliantly simple. There is no form of damage or death in this game. Gris can take falls from infinite heights, and she simply lands with a graceful plant of her feet on the ground. There are no moments where you’ll plummet to your death because you failed to make a jump, and that’s a refreshing change. It is basically platforming without punishment. This turns the game into a quest more than a challenge, placing the story front and centre ahead of the action. If you like difficulty in platformers, you won’t find it here. This is all about constructing a story and putting the player first.

That isn’t to say there aren’t any barriers in place designed to impede your progress. Early on in the game’s ‘red’ world, harsh winds prevent Gris from moving forward and even blow her backwards unless she can find shelter or use her first ability, once she unlocks it. Although I enjoyed this concept at first, these winds did happen a little too frequently. At least when this does happen, Gris merely gets blown back a few metres before bracing herself and preventing the player from losing any more ground.

Gris can unlock several unique abilities which impact on the way the game is played, delivered through power-ups to her magical dress. From the beginning, you’re merely equipped with a basic jump command, but by going through the game’s first area, Gris’s dress will turn into a solid boulder, which prevents her from harsh winds, and can be used to smash through loose rocks to access hidden areas below her. Other features include a double jump, a boosted jump from the red birds and even the ability to sing. There are even mirrored sections in the endgame where gravity is flipped upside down and Gris will fall upwards. While the platforming is solid throughout, it’s when you unlock the double jump and the red birds first appear where things really start to shine. These sequences allow Gris to reach new heights and it feels incredible to soar majestically with her dress flowing in the wind beneath her.

A great thing about Gris’s abilities is the seamless way that they are slowly introduced into the game, giving the player time to predict how to use them even before they have unlocked them. Visual cues for each ability are delivered to the player in advance of obtaining them. For example, before unlocking the boulder ability, Gris will walk across loose rocky terrain which appears to shake, which appears to be concealing a path to a new area. It’s still quite easy to spot when these instances occur even when the player is equipped with all of Gris’s abilities, because the game presents them in this fashion.

An original score composed by Berlinist accompanies players through the different areas. It is full of heart and charm, which perfectly complements the action on screen. The music is light and ditty when exploring the nature world, but has more of an ethereal sound when Gris ends up traversing to the depths of space. The oceanic abyss has its own score – haunting, brooding, as if danger could strike at any time. Each of these areas has a different tone to them – even just from sub-section to sub-section – and a far more grandiose reprisal of each area plays when Gris is about to move to a new area, with the world’s colours changing around her. These sequences all transition seamlessly with no loading times between them. GRIS isn’t a long game, but you can sit down and play it from start to finish without seeing a single loading screen. The game simply concludes one part of the game by branching off into a cutscene, during which you’ll follow Gris as she continues the section or moves to a new one.

Thematically, GRIS has very little to say upfront, but so much to offer deep down. Story and character development all occurs with no dialogue. Instead, Nomada puts everything into the actions of Gris and those she meets along her journey. Creative director Conrad Roset said that while he has some vision of the game’s lore, he wants players to give their own interpretation of the story, so here’s mine: the game deals with elements of melancholy, loss, despair and sorrow. Gris begins her journey by trying to sing a song, but the anguish she suffers has caused her to lose her voice. The despondent young girl then goes on a journey to reclaim her voice and it takes her to many different unique locations, all crafted with Roset’s breathtaking artistic style.. Sometimes, the lack of dialogue can make things confusing, such as why this giant bird or sea monster is chasing her (or even where it came from – it seems like it manifests from hundreds of smaller creatures), but this ultimately heightens the tension of Gris’s journey. It really shows just how much power and influence imagery and visual components can over over a story.

One of the major positive aspects of GRIS’s platforming is that the world is more or less yours to explore, unlike a lot of other games that guide you in a particular direction. Side scrollers traditionally guide you from left to right to progress, treating the right as foreign, unexplored territory. Here, it’s the centre that acts as the familiar, the launching pad of every new area you end up in. As such, you’ll be heading either left or right, collecting the orbs and returning to your base. However, there is no map or any indication of your current location, and the later areas of the game get rather large. I would often find myself struggling to retrace my steps back to present the lights and move on to the next area in the latter stages of the game. 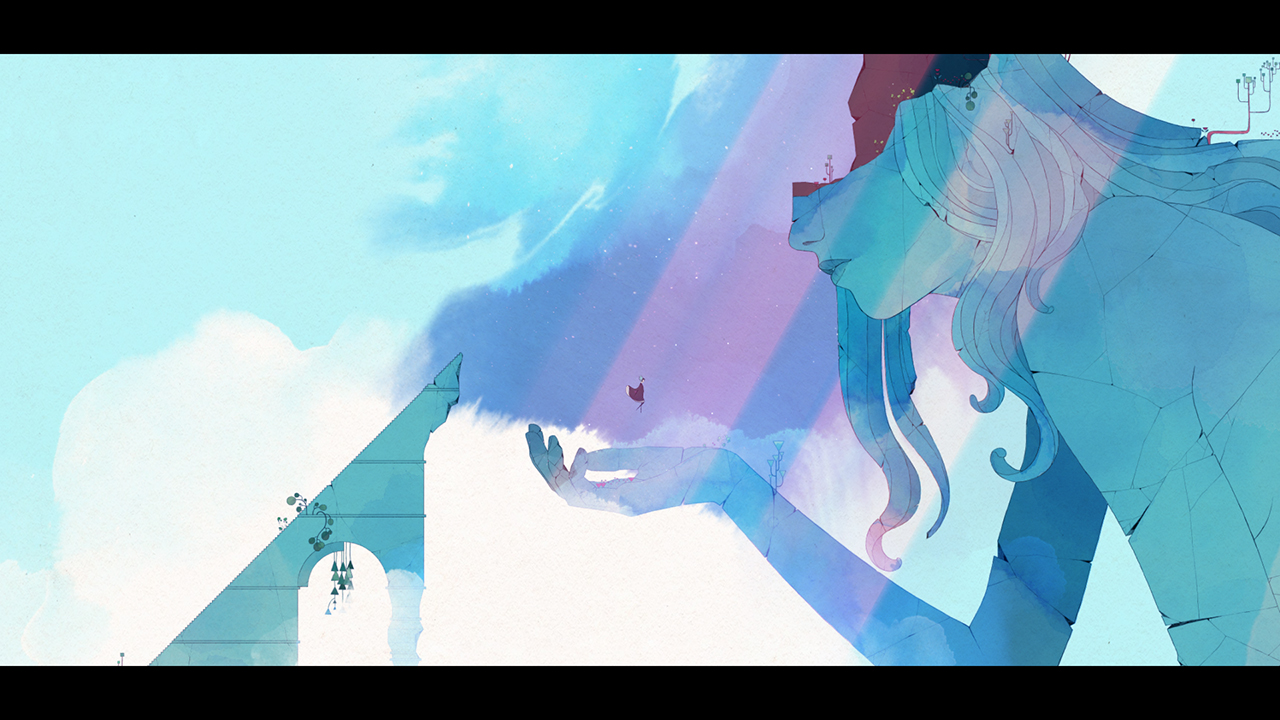 As you progress through Gris’s narrative, its world begins to change colours. Here, we see the world shift to blue, as the world moves into its water environment.

Through its striking use of colour, dynamic music, and effective use of platforming mechanics, Nomada Studio has created one of the most outstanding works in the platforming genre in recent memory. As a debut title from the Spanish studio, GRIS is incredibly powerful and a great way to make a lasting impact on the indie scene.

An incredible debut showing from Nomada Studio, GRIS really illustrates the impact of visual storytelling on gaming as a medium.