At first glance, doinksoft’s Gato Roboto is just a tongue-in-cheek throwback to Metroid II: Return of Samus, the black-and-white GameBoy title. Instead of our badass heroine, Gato Roboto has you controlling a mech-striding cat, but there’s more to it than just a very-adorable parody.

In Gato Roboto, you play as a man named Gary’s (of course his name is Gary) cat, Kiki. After jumping on the command station keyboard and crashing their spaceship on an alien planet, trapping Gary inside – same old story for any cat owner, really – Kiki explores the abandoned facility to save her owner and escape the planet alive. She fends off alien creatures with a Samus-like mech suit to unlock new upgrades and new areas of the facility, but when Kiki keeps running into a violent mouse (not a typo), Gary realises there’s something not quite right.

Gato Roboto‘s hook is in the “Playing a Cat” part, and this translates to a Metroid-like that takes a handful of forms throughout the game. You start off as a normal cat, which is your agile Zero Suit form that lets you run up walls, crawl into small spaces and swim underwater. Your mech suit (which you’ll be using most of the time) gives you a hit-stun blaster and destructive missiles but it’s larger and less agile, while also being vulnerable to water. Occasionally you’ll hop into a submersible, too, which has an underwater blaster and not much else.

It’s unapologetically Metroid with a few quality-of-life tweaks, like a missile launcher that overheats instead of using an emptying ammo count. Kiki controls reliably (a little floaty, sticks to platforms on contact) but it’s the contrast between each form that makes Gato Roboto so fun moment-to-moment. Switching forms is slick and painless – Kiki enters and ejects from her mech instantly – and the regularity of it, alongside its immaculate world design, keeps the game buzzing with variety. 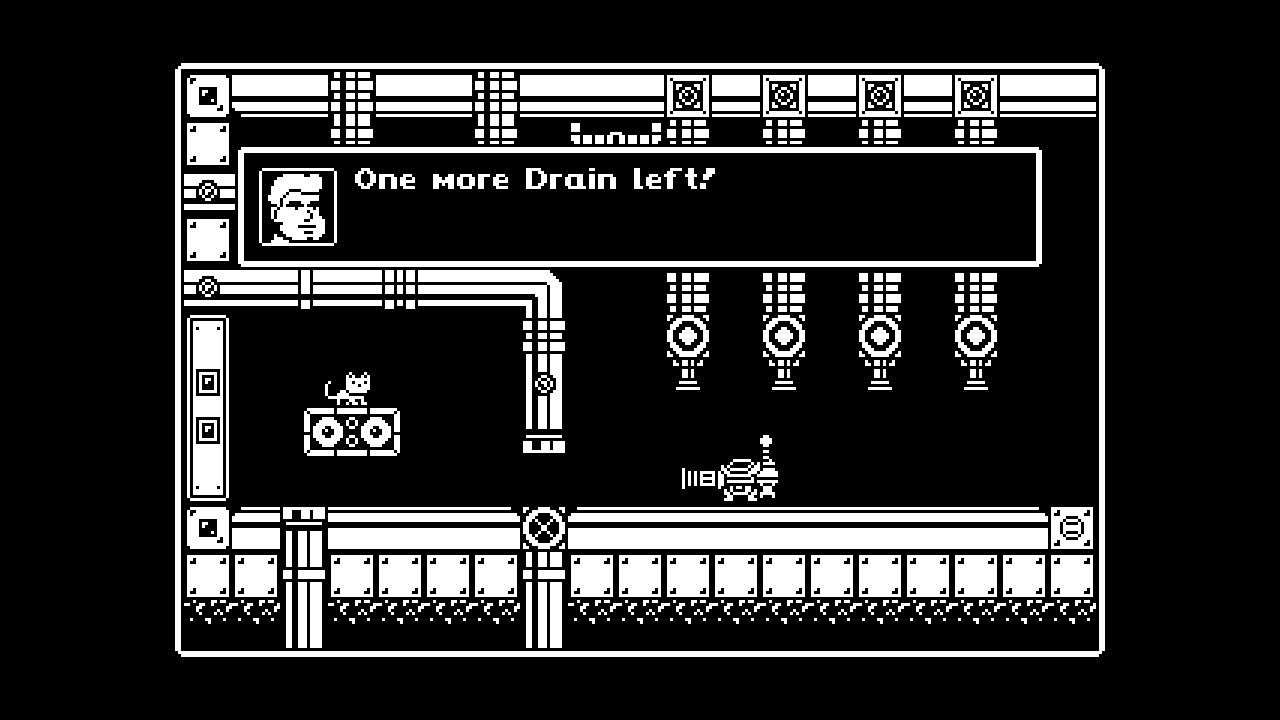 As the next in a long line of modern Metroidvanias, Gato Roboto is less about getting lost in a dense, atmospheric world and more about keeping an adventurous pace. It feels very Nintendo in this way. Each zone feels fresh because it approaches the cat-mech dynamic from a new angle instead of just stacking you with more and more abilities. You focus on changing the world itself – like disabling heat vents or draining water levels – to open up more opportunities for the abilities you already have. This gives Gato Roboto a rewarding ebb and flow that’s reliably enjoyable and less tedious than its forebears could be.

Gato Roboto keeps you focused and forward-facing and, for some, this could be a double-edged sword. The faster pace means there’s less potential to get lost and opportunities to explore aren’t quite as common as other Metroidvanias. It still has the same spiral-pathed progression, where you unlock new abilities that let you explore more of the world; Gato Roboto just moves away from the more open-ended interpretations of the genre for something leaner.

Having barely played any of the original Metroid games (don’t @ me), Gato Roboto reminded me most of Image & Form Games’ SteamWorld Dig titles – though I found Gato Roboto better balanced and varied, personally. The tough boss battles (like simpler, more forgiving Cuphead bosses) and the variety of forms leads to a tighter game with few lulls.

Like many Devolver-published titles, the writing is charming and reliably funny. It gets a lot of laughs (or at least earnest chuckles) from the premise – where a pet cat pilots a Samus suit to save their human owner named Gary – and dialogue pops up often, usually upon unlocks or major events. Also, Kiki and her adorable chatbox portraits always had me smiling.

The black-and-white visuals are likely a throwback to Metroid II: Return of Samus, though it’s far more reminiscent of Moppin’s high-contrast Downwell (also published by Devolver). Like Downwell, it even has unlockable palette swaps if you want a softer or funkier appearance, though Gato Roboto is a gorgeous game nevertheless with charming sprites and backdrops that hew closer to Mega Man than Metroid II’s detailed, gradient-heavy style. You might just need to change the palette early on if you find the ultra-sharp two-tone visuals straining on the eyes.

The audio is also top-notch. Gato Roboto’s music jumps between genres – some Metroid-ish industrial ambience, some techno, even a little hip-hop – and it’s all phenomenal and it’s the main reason I want to replay it (besides its short length, which I’ll get to). The sound effects evoke NES and GameBoy titles with its piercing Morse-code beeps for dialogue, its colourful range of satisfying action effects, and the variety of noisy cat meows that are so charming I suspect they’re why they made the game in the first place. “We need a game for these kick-ass meows,” someone said, probably.

With Gato Roboto, doinksoft strips the genre down, strikes through the tedium and drills down to the best parts. It succeeds at everything it sets out to do; it’s a beyond-solid Metroidvania that’s very well-designed around a form-switching mechanic, with wonderful writing and fantastic music. It’s definitely on the shorter side – I finished Gato Roboto in around 3.5 hours with a 75% completion rate – but it’s priced to match, paced splendidly, and filled with compelling twists on the gameplay every step of the way. 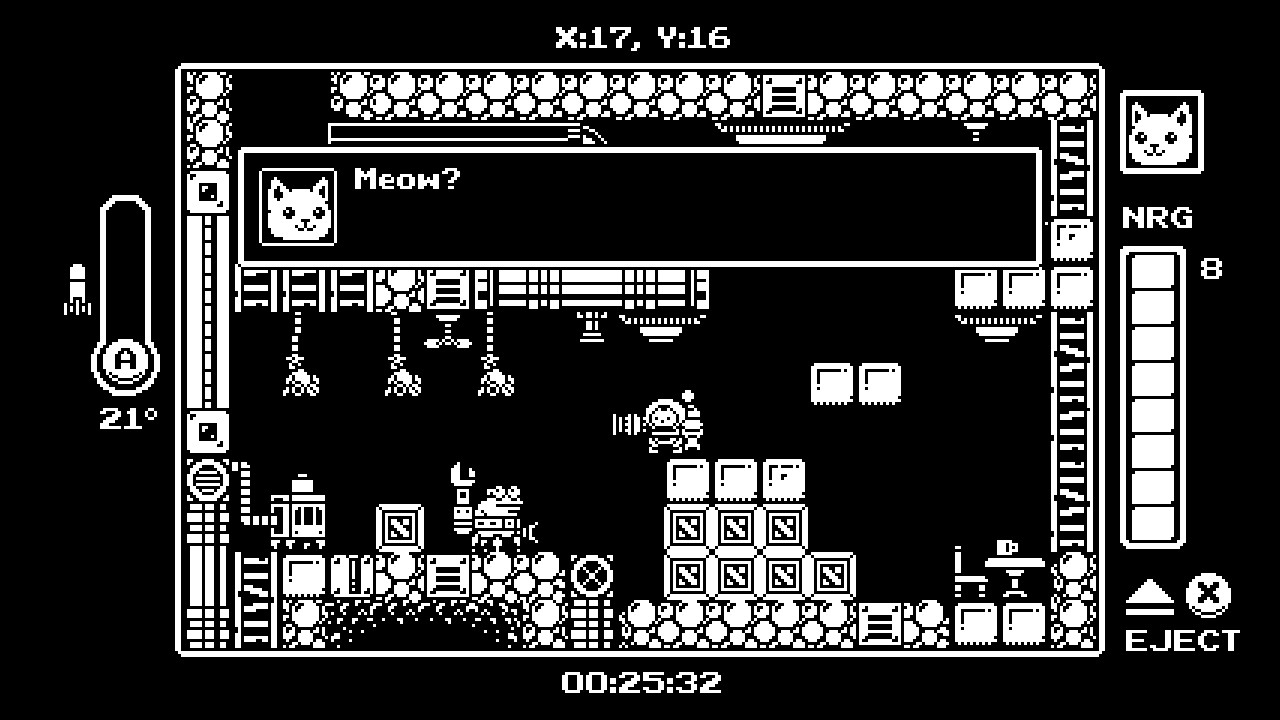 Gato Roboto doesn’t break the bank and absolutely doesn’t outstay its welcome. If anything, it’s way too short for how good it is. If you need a jolt of Metroid goodness or just something packed with a lot of Cute, pick it up.