Devil May Cry 5 is an explosive return to form for a series ten years dormant, undoing the damage of an unnecessary reboot and bringing a sub-genre this franchise is often credited with starting – but most definitely perfected – back into the mainstream. It’s no secret that the Devil May Cry series has dealt with plenty of dramas and setbacks, which is why it’s a joy to see Devil May Cry 5 flaunting its production values and following through on the promises that the unfinished fourth entry made.

The most surprising aspect of Devil May Cry 5 isn’t the amazing gameplay (we’ll get to that later), but the story. Serving as what seems to be a conclusion to the Sons of Sparda story, Devil May Cry 5 manages to answer most of the series’ long-unanswered questions, gives closure to Dante and Vergil’s long-running story arc and finally hands the figurative torch over to the franchise’s new face, Nero, who sees his own substantial character development throughout the game’s story.

Director Hideaki Itsuno and his team also managed to experiment with the story’s presentation and take some proper risks in its progression, the biggest of them all being that it’s not the slightest bit linear. The story begins with our main characters getting smacked by the big bad, then introduces the mysterious new playable character, V, and goes on to jump forward, backward and side to side as the maddeningly fun plot unfolds. Capcom’s other major risk comes in the form of V, a character who has been subject to fan speculation since his announcement, and whose place in the story only grows more interesting as it progresses. He’s a scrawny goth boy who wields a cane, is covered in tattoos and speaks in a hushed tone while reciting poetry.

Immediately, it’s clear that V is aesthetically different from the game’s other lead characters, but his gameplay is also a quite the departure from what the series is known for. His physical stature isn’t just an aesthetic choice – he distinctly lacks the combat prowess that Dante and Nero are known for. As such, he relies on summoning three distinct demons: Griffon, a wise cracking bird used for ranged attacks; Shadow, a panther who can morph his body for melee attacks; and Nightmare, a giant golem that acts as V’s devil trigger and can demolish enemies at the expense of the D.T. Gauge. These demons also tie into V’s mysteriousness, as fans of the series will quickly find their designs and movesets familiar to say the least.

While these three demons act as V’s weapons, he still needs to land the final blow on an enemy, which he does by teleporting into it for a real cool finisher. It’s an interesting take on the DMC formula, forcing players to really take note of their positioning; you don’t want to get caught in the middle of four or five enemies when V is effectively a glass cannon.

With all of these differences between V and his fellow playable characters, of course there’s always going to be an issue or two. The first of these is how the style meter works with him: I often found myself encouraged to button mash when playing as V because unlike the Nero and Dante, this was the easiest way to bump up the style meter. I can see why that might have been intentional; it’d be an absolute nightmare for the average player to have to manage V’s positioning, Griffon and Shadow’s health bars and manually charging the D.T. Gauge while also having to pay attention to the style meter. Secondly, the default control scheme not only feels at odds with V’s unique play style but it’s also somewhat uncomfortable – I recommend using the rebindable controls to at least move Griffon onto a trigger in order to offset this.

V is playable in the fewest of the game’s 20 missions, easing him into the game and giving Dante’s refined gameplay and Nero’s heavily-revamped mechanics more time to shine. It’s a testament to the game’s pacing that none of the three playable characters feel like they – or their stories – have been shoehorned into the overall plot, and that none of their gameplay becomes stale through overexposure. 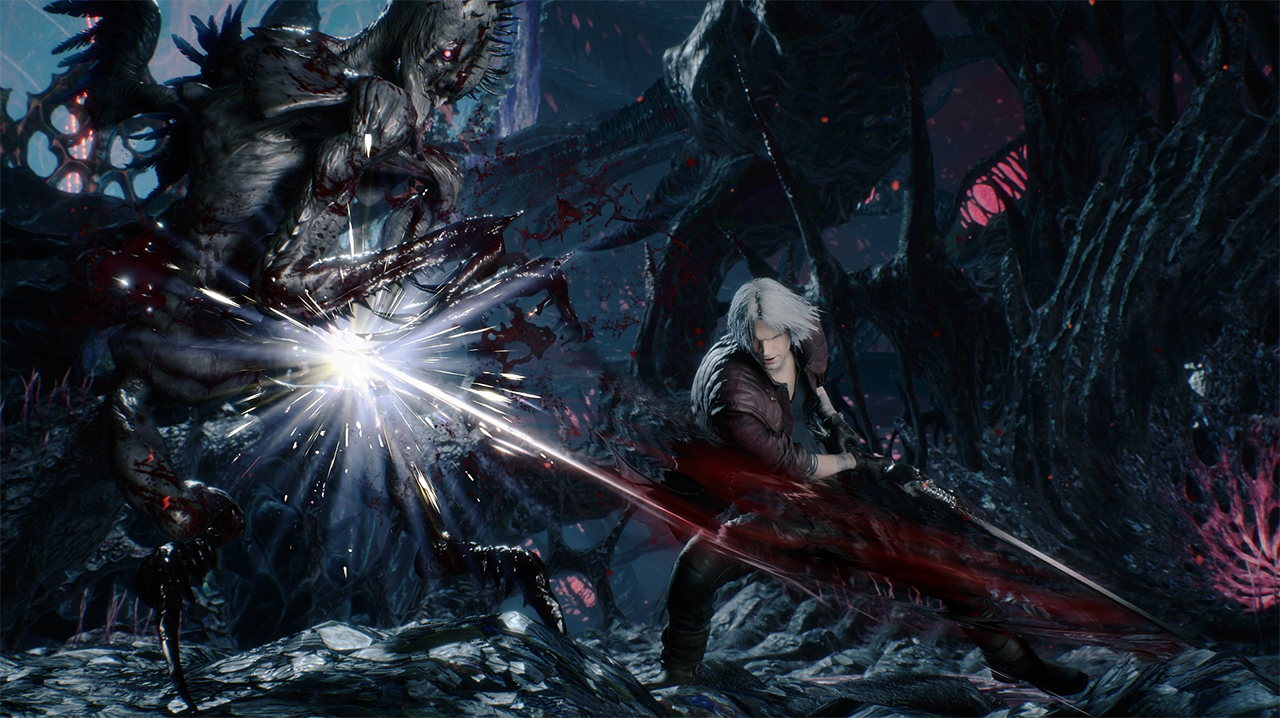 Of the two “veteran” demon hunters, Dante’s gameplay will feel more familiar to long-time Devil May Cry fans. He still retains his four unique styles that are swappable on the fly, and follows the tradition of collecting some new and familiar weapons along his journey, which he can also switch on the fly. While he hasn’t changed all that much mechanically, Capcom has pushed Dante’s well-known mechanics as far as they can go; this version of his combat system has so much depth that it can leave you feeling paralysed by all the options you’ve got available to you. This comes up when you’re using a number of the weapons available to Dante throughout the game, the least spoiler-y example being Dr. Faust, a weaponised cowboy hat that creates an interesting risk-reward dilemma, especially for those who avoid the frivolous microtransactions, by consuming Red Orbs – also known as the game’s currency – to attack, but bearing the ability to drastically increase the amount of them you can earn through combat There’s a lot more that could be discussed, but some of Dante’s later mechanics are best discovered on your own, as they can be considered heavy spoilers.

You’ll find even more of that added depth when you’re playing as Nero. Nero acted as the more accessible playable character in Devil May Cry 4, trading Dante’s smorgasboard of weapons and styles for easier aerial combos, the Red Queen’s Exceed mechanic, and the Devil Bringer, a demonic arm that can grapple enemies for an attack or simply close the gap so that he can keep on slashing. With the Devil Bringer taken out of play early in Devil May Cry 5, Capcom took the opportunity to introduce a slightly more customisable replacement called the Devil Breaker.

Developed by Nero’s RnD department on wheels, Nico, the Devil Breaker is a prosthetic arm that has a grappling hook to replicate the Devil Bringer’s distance-closing ability and can be loaded with eight different attachments (more if you’ve got the Deluxe Edition) to give it a new ability and function. It maintains Nero’s accessibility while also bringing him more Dante-esque variety given that each unique mechanic is suited to different situations and play styles: Gerbera shoots a blast that launches enemies back and can be used to propel Nero through the air; Ragtime allows Nero to slow down time; Punch Line is a rocket arm; and so forth. Each attachment also has a “Break Away” ability that instantly destroys it, and can also be ejected at any time.

That’s how the Devil Breakers are balanced: you can’t simply switch between them willy-nilly – you need to destroy them before you can equip a different one. This forces you to think about your loadout and the cartridges that you pick up before you jump into combat, but it also stops the whole system from becoming overwhelming and overpowered. Nero also unlocks a really cool ability to use in the post-game; much like a few of Dante’s weapons and abilities, it’s best to leave you to discover that on your own. 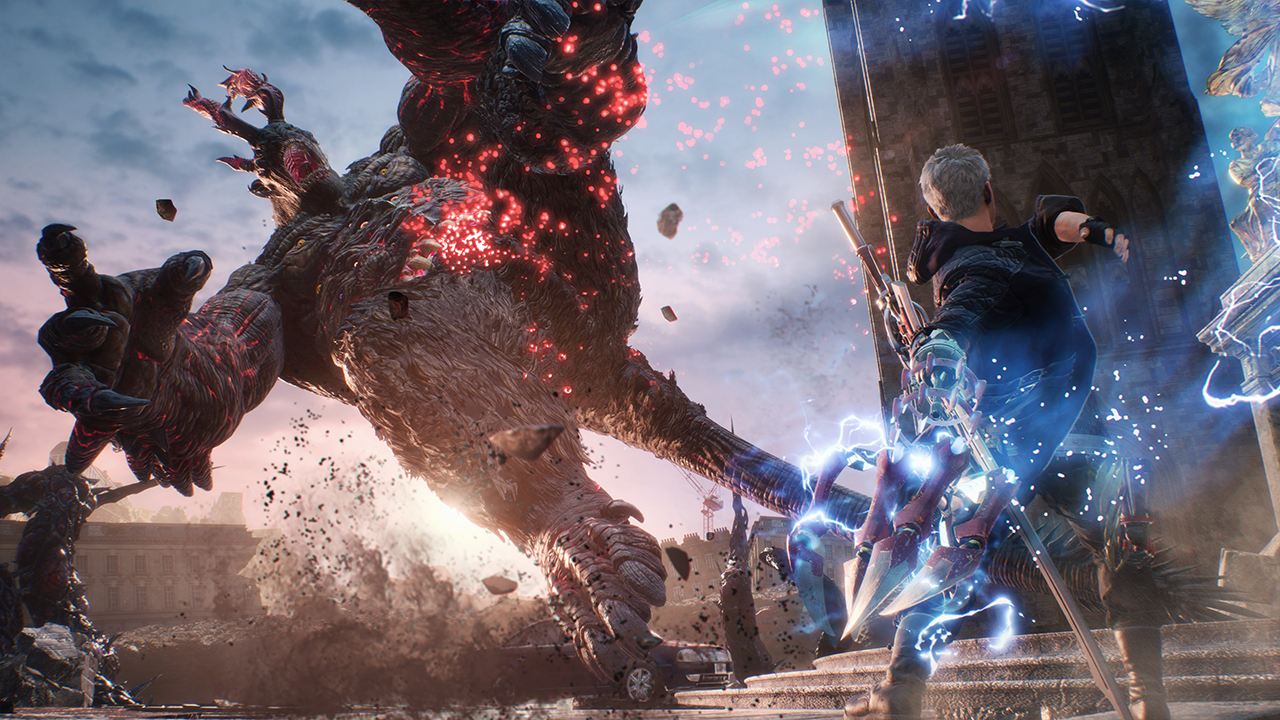 All of these new and improved mechanics are wrapped up in a neat little package along with a perfectly paced campaign – which the Bloody Palace will add to later this month – and a pseudo-multiplayer mode where you can see other players as other characters during certain points in the story. There’s at least one instance in this pseudo-multiplayer mode where you can impact the other players’ progress, and one where the three leads have a co-operative moment, which is a neat addition to a traditionally single-player game.

Overall, Capcom must be commended for its ability to bring back classic franchises – the Resident Evil 2 Remake first, and now Devil May Cry –  and understand what made them work: fun. Devil May Cry is the purest example of that, and it’s an absolute must-have for fans and newcomers alike.

Devil May Cry 5 is a glorious return to form for a series many thought dead by mid-2000s Capcom’s hand. There simply aren’t many games that come to mind that have core gameplay as deep and satisfying as Devil May Cry with characters as likeable as these, and that’s why it’s one of the year’s first must-have blockbusters.