“A special crew is sent to Primus Vita to retrieve all the water that was stolen from us hundreds of years prior.”

Humans are flawed creatures. We are self-aware to a fault, letting our defenses rise at any possible threat, be it physical or emotional. Destination Primus Vita is an episodic title that delves into the psyche of the members of Crew 121, each one with their own scars and trauma that come to light as they go through a rigorous training program before landing on Primus Vita. Canadian developer Epsilon Games has developed a truly gripping story about mending the relationships with your friends and accepting your past pain and mistakes; that comes as no surprise, though, given that the property began its life as a set of novels and comic books before Epsilon got its hands on it.

The game’s first episode is centred around Dr. Austin Blair-Moreno, the no-nonsense, scientist workaholic older sister to the crew’s lieutenant, Coby. Their relationship is not stellar to start off with, as Austin always sees Coby as her younger brother, rather than the reliable and ranking officer he has become. The episode takes us through Austin’s relationship with each crew member and the moment where each relationship fractured due to a misunderstanding, prejudice or misconception. We see these moments through digital memory recreations that work well as both info dumps and vehicles for character development; the game asks you to find clues and piece the story together, at which point it has you choose between two dialogues that will either enhance or diminish Austin’s relationship with specific characters.

Since the game provides no clues or insights into how the characters will respond to the dialogues you can choose from, though, it calls the player’s common sense and social skills into play as well. The characters drive Destination Primus Vita’s plot, which is a refreshing thing to see in an age where so many games rely on errands, missions and other events to further their story. The voice acting is absolutely top notch, with clear, concise and emotive performances from each of the characters. Everyone has an Austin-type in their life, which creates a relatable connection with the character and her point of view, and it’s quite gratifying to see the character you’re controlling start to mend her relationships with her colleagues.

Epsilon Games describes Destination Primus Vita as a first-person psychological puzzle adventure game; although its psychological elements are quite good, the game’s first major issues appear in the puzzles. Each puzzle requires exploring the enclosed area in front of you, surrounded by the abyss of space. Unfortunately, if you’re like me and skim game instructions because you believe that playing the game will help you learn it quicker, then you’re in trouble. I found myself backtracking and getting lost on plenty of occasions for that exact reason. If you’re not paying attention after collecting a clue, you could miss the audio cue that leads you to the next one; you could sneeze, blink, crack your neck, look away or cough and you’d miss it, leaving you high and dry to run around the sci-fi landscape. Sometimes, even more frustratingly, you won’t even get a clue. 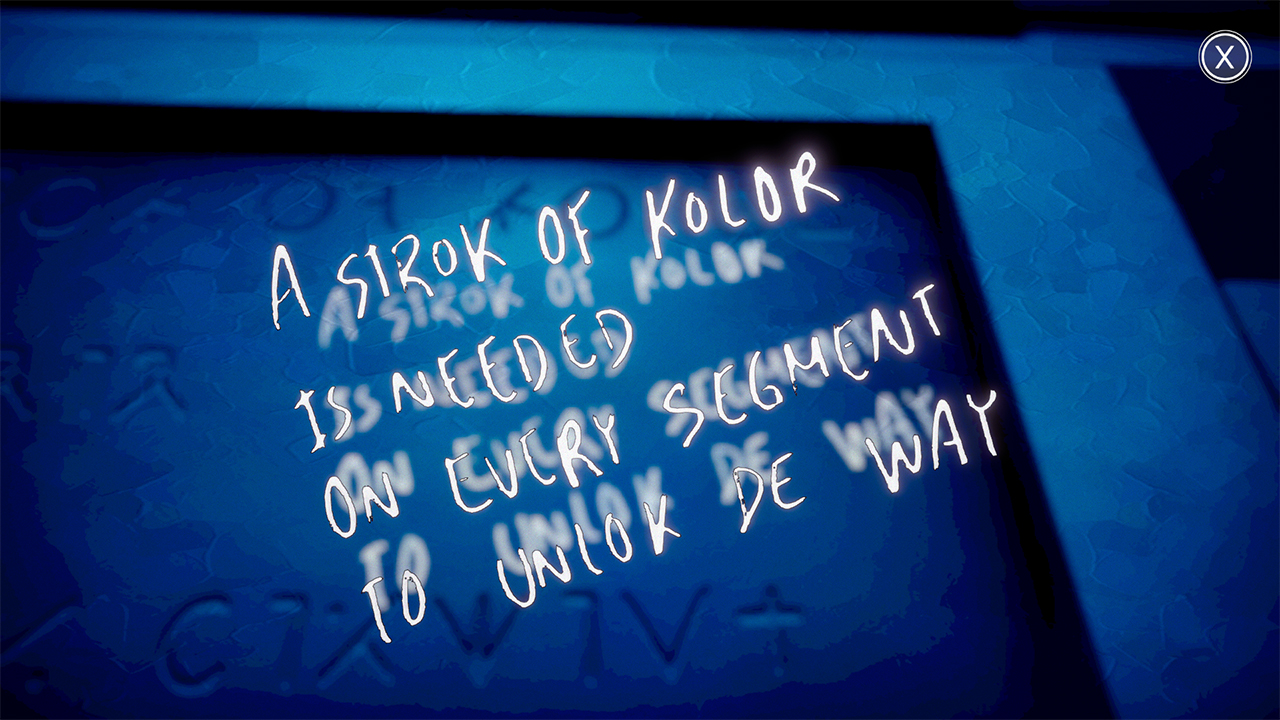 At one point, the game will ask you to find nine pieces of metal to create armour, with two of those pieces hidden without any clue as to their location. It took ten minutes of furious clicking on everything to figure out where they were. At another, you’re asked to traverse a foggy, branching labyrinth in less than a minute, and taking the wrong path sees you greeted with a very loud sound and a Shatter (i.e., alien bad guy) to fight against; I heard and saw this many times throughout my playthrough, simply because I didn’t pay attention to a pretty succinct directional key at the start of the challenge which would’ve made my playthrough much easier than it was. Destination Primus Vita rewards players for paying attention, but it would be nice to have an in-game checklist or progress meter to stop people forgetting where they’re up to.

The game should also come with a warning to those who get motion sickness easily; there are sequences where you’ll be asked to climb walls and walk on the level’s ceiling, and those can be quite disorienting due to the sudden, automatic camera shift as you do so. Without a map or a checklist to keep track of where you’ve been and what you’ve done, it’s almost a guarantee that you’ll be backtracking and walking up and down the walls more than you need to; an option to lock the camera in place, or even just to manually trigger the camera shift, would definitely have helped.

The accompanying score is brilliantly produced with ambient composition to match the scenes in particular. The empty plane of existence in Austin’s mind during her memory reconstructions is capped off with a minimalistic sci-fi score to great effect. With that being said, the abrupt, very loud sound that accompanies the Shatter in the aforementioned labyrinth is a good example of how some of the sound mixing can be a little bit overbearing. The sound effects work is nice, with little digital twitches and noises to fill out the soundscape and add ambience to the level, and the characters are well-designed and animated, with a comic-book aesthetic that pays homage to the property’s time as a graphic novel. Outside of a few rather iffy moments, the game is quite well crafted as a whole, and that’s great to see.

We’re only an episode into Destination Primus Vita, but I can already tell that this game will be one to keep an eye on as new episodes are released. It’s an interesting and fleshed-out story that more than makes up for some awkward gameplay and visual elements; it’s definitely worth a look if you’re a fan of story-based puzzle games. Have a notepad handy, though.

Nick reviewed Destination Primus Vita – Episode 1: Austin using a retail Steam code provided by its publisher. We will have more information on our review process for episodic games available shortly!