On the surface, System Era Softworks’ space exploration and survival simulator Astroneer – a recent Steam Early Access and Xbox Game Preview graduate – is a game that ticks all of my boxes: it’s got space, it’s got exploration, and it’s got comfort. There’s nothing quite like kicking back, relaxing and exploring the unknown by yourself, often accompanied by ambient music and the sounds of an unfamiliar landscape. I’m no stranger to these types of games, and love them dearly, but I had a much harder time with Astroneer than other games of the genre.

Astroneer’s premise centres around exploring an uncharted system, dropping players on a lush, but entirely unexplored, planet and immediately leaving them to gather resources, construct a base and explore the planet on their own time before they jump into their newly-built rocket ship and do it all again. It’s a tried-and-tested formula that we’ve seen in gaming before, but as is the case with many tried-and-tested formulas, it works.

From a technical standpoint, Astroneer is well-designed; the procedurally-generated landscapes keep exploration fresh, and lead to some interesting arrangements of flora and geometry (see the photo below featuring colossal mushrooms growing deep underground). The game ran well on my system (GTX 1070, 16GB RAM), and I must admit, the landscapes and art style are beautiful. The planet you start on has a bright colour palette that is visually striking, and it provides a stark contrast to the harsh but still eye-popping palettes of later planets. System Era Softworks has created something incredibly beautiful, something that truly appeals to the sense of wonder that drives exploration. 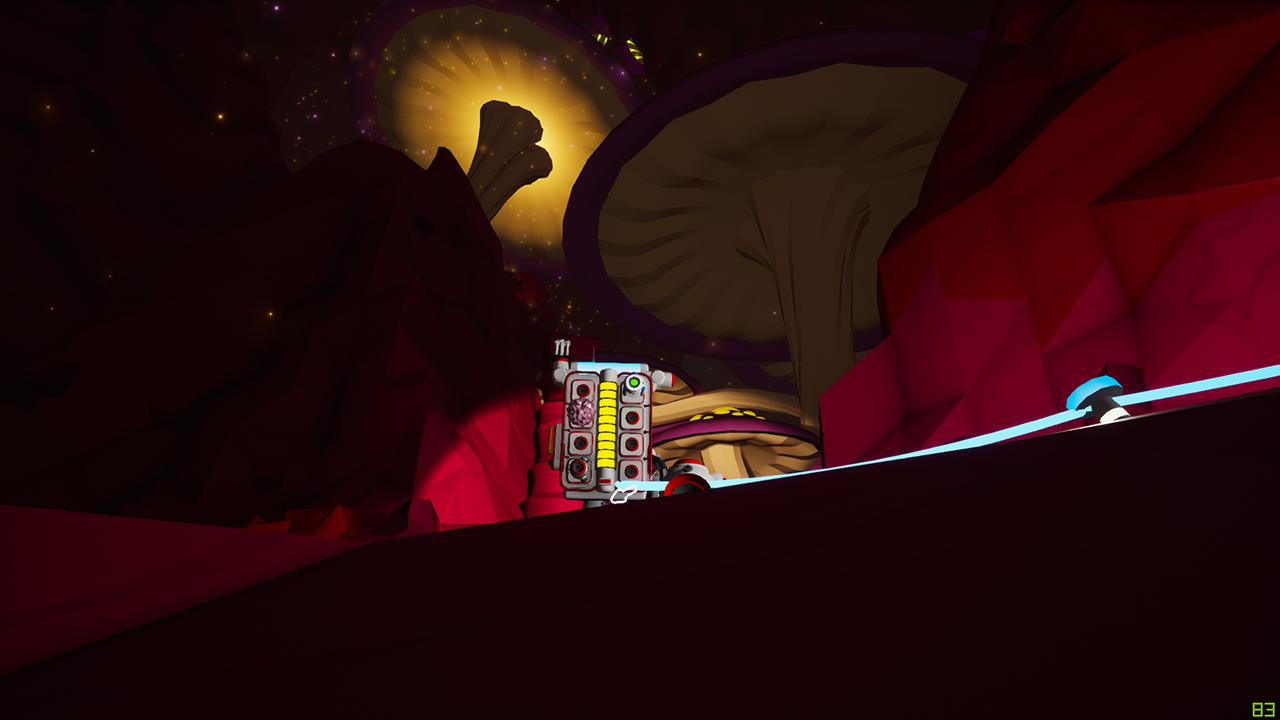 Mechanically, System Era Softworks has reworked and improved a number of Astroneer’s features for its full release. Base construction is simple and precise, there are no glaring issues with moment-to-moment gameplay (the resource gathering and movement are, again, simply made but done very well) and, in a fantastic design decision that I cannot complement enough, Astroneer skips the usual “acquire basic tools” sequence that kicks off most exploration games. You begin the game with the beginnings of a base already made, and will be more concerned with building a high-tech furnace and research station, rather than engaging in fisticuffs with a tree to make a pickaxe. I found that to be incredibly refreshing, and a new take on survival mechanics in general. There are minor issues with both the camera and inventory management, but these I can put down to cramped environments underground (the camera) and my own haphazard and devil-may-care attitude towards being organized.

Unfortunately, despite my praises of both the art style and the mechanics, Astroneer has one near-fatal flaw that comes to be pervasive throughout the experience: it doesn’t give the player any real direction. Once the game begins in earnest, it doesn’t give you a goal, or even the beginning of a pathway. Had I not stumbled upon a mysterious alien construct while exploring the first planet, I may have spent my time with the game simply looking at the scenery. While the tutorial covers the basics of various mechanics (oxygen, crafting, construction), it never tells you why you’re doing any of it. Again, this lack of direction becomes pervasive, leaving me confused to the point where I found myself often checking the game’s Wiki for explanations. While this may have been just my personal experience, I find that the lack of a goal or mission (even just an implied overall goal) makes it hard to stay focused and justify the time and effort I would spend on gathering resources or exploring. While player freedom is extremely important in exploration games, the lack of direction means that there often isn’t any reason to continue, or prioritise any task over simply taking in the scenery.

Overall, I did enjoy my time with Astroneer, even if that time was marred by a sense of going nowhere. The experience is mostly enjoyable, and the game itself is visually beautiful and incredibly relaxing. I would recommend this if you’re a fan of the space-exploration and survival-sim genre, and don’t mind either aimlessly exploring, or journeying into the unknown (both literally and figuratively).

Astroneer is a solid package, with a beautiful, relaxing art style and excellent mechanics, and it’s definitely worth picking up if you’re a fan of the genre, but some players may find its failure to provide any real purpose or direction outside of exploration a little jarring.

[…] more than three million sales on PC and Xbox One, System Era Softworks’ “beautiful, relaxing” space exploration simulator is headed to PS4 on November 15 along with an exclusive suit and visor. PS4 owners who pre-order […]