Assassin’s Creed Odyssey is a strange game. It’s an Assassin’s Creed game set before the existence of the titular Assassins brotherhood – and the rival Templar Order – and the series’ iconic hidden blade is replaced by the Spear of Leonidas. Ubisoft has really pushed the direction it started taking in Assassin’s Creed Origins last year, creating a fully featured role-playing game in both game and story design. For all intents and purposes, Assassin’s Creed: Odyssey ditches the Assassin’s Creed and takes on its own persona within the universe.

I’ll begin this review the same way the game began – on a bit of a sour note. This game has its share of bugs and performance issues. It crashed within a minute the first time I opened it,  and I’ve experienced three crashes, one corrupted save file (that was thankfully negated thanks to the generous autosaves) and a fair few frame drops while out at sea during the 50 hours I’ve spent with it. Most of these issues seem to have been patched out, thankfully, but I feel it’s important to mention them.

Putting these issues to the side, though, Odyssey is a surprisingly wonderful departure from what has become a rather formulaic series. Last year’s Origins introduced us to Ubisoft’s new design philosophy with the series, resembling – at least mechanically – a post-Witcher 3 role-playing game. Ubisoft has pushed this to its absolute limit in Odyssey, with a fully featured dialogue system, branching quests, and story beats, armor and weapon sets to collect and a leveling system that, while not as in-depth as one would expect from an RPG, allows for a fair amount of customization in terms of making your own builds. 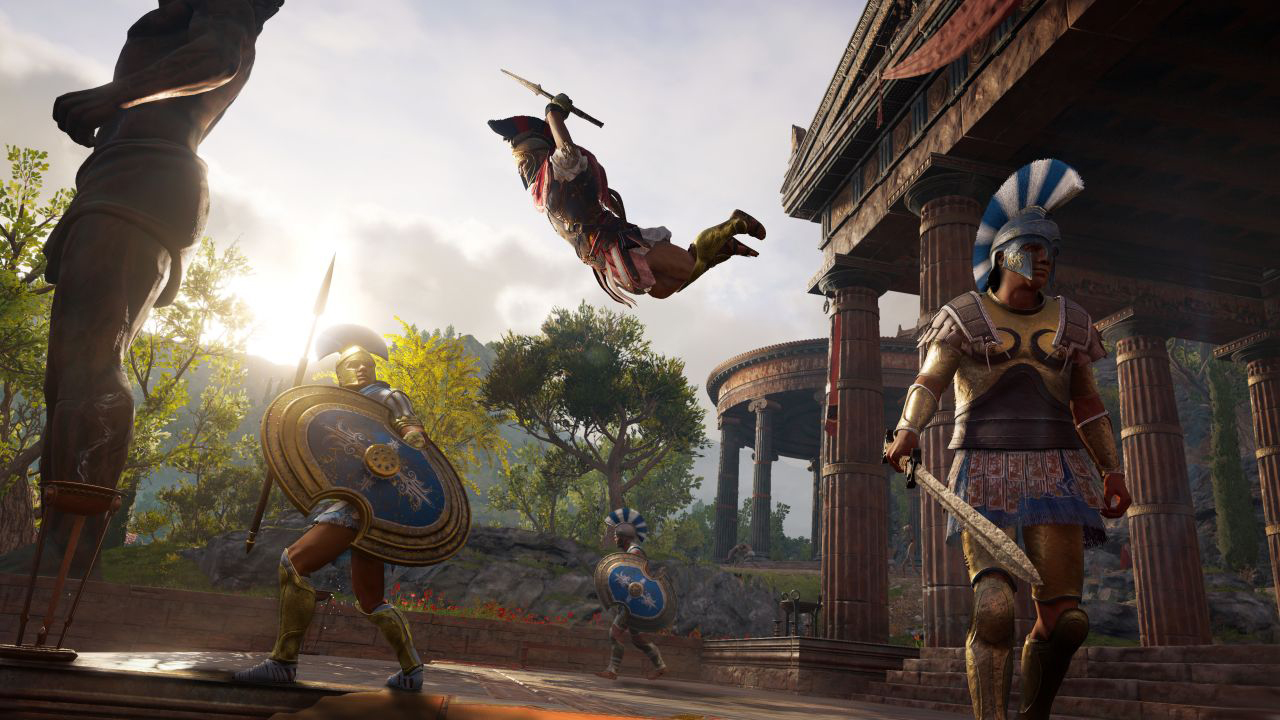 There’s a theme of discovery and choice that can be found in every aspect of Odyssey’s design, and it’s apparent that Ubisoft set out to make a game that captured the feeling of adventure found in epic tales like the game’s namesake. This is evident from the very beginning, when you’re asked to choose between Exploration and Guided modes that alter how you’re fed your quest objectives. Guided mode uses your standard waypoint system, while Exploration mode lets go of your hand a little, replacing the waypoints with comparatively vague clues and directions that encourage you to move off the beaten path and explore the world – something that players might not do if they’re told exactly where to go. It’s clearly the intended way to play, as the world is filled with secrets just waiting to be found, from tombs and hunting grounds to, more mythologically interesting areas.

As fantastic as Exploration mode is, Ubisoft could have taken it quite a bit further. Objectives are still quite easy to find – it’s often as simple as just walking in the direction you’re given and then being prompted to use your eagle to pinpoint it – and the directions show up in your quest log even if you don’t ask the quest giver for them, somewhat reducing the potential for exploration. Despite this shortcoming, though, Exploration mode is a step in the right direction for Assassin’s Creed as a whole, and something I’m excited to see Ubisoft take further in future releases.

This new approach to freedom is also strongly felt in the story. While the main quest line unfortunately devolves into a case of “go here, meet the quest giver, do the quest, now go here” punctuated by moments of real emotional heart and narrative purpose that don’t come nearly often enough, it’s designed to further encourage exploration of the world and everything in it. “It’s about the journey, not the destination,” as they say, and interacting with the side content on my journey to the end was some of the most fun I’ve had all year. 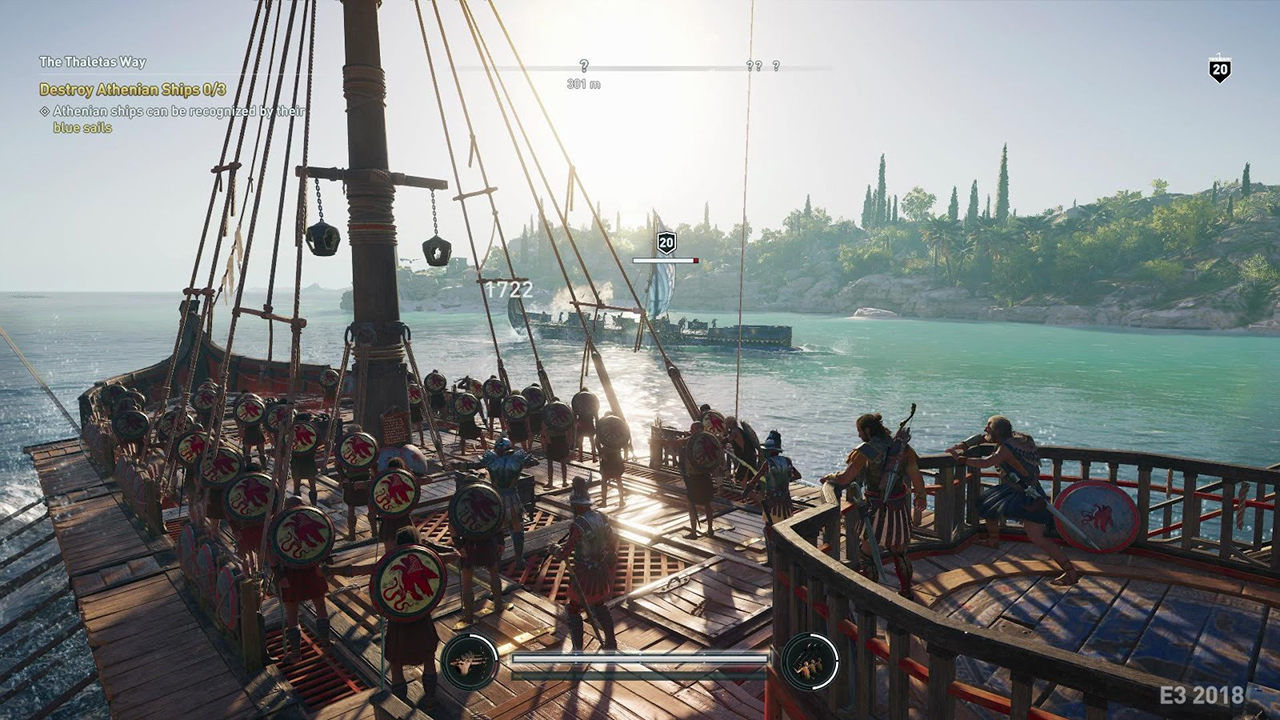 The side and end-game content is the real meat of the game – the thing that makes Assassin’s Creed: Odyssey shine. All the systems Ubisoft has implemented here feed into each other to varying degrees. Side quests are numerous, and are often bookended with interesting choices for you to make that have wildly different effects on the characters and world, even if they occasionally feel somewhat artificial, relying on a “gotcha” moment to stress how uncivilized the founders of Western democracy could be at times. However, these side quests often funnel you into opportunities to interact with the game’s faction system.

Assassin’s Creed: Odyssey’s setting in the Peloponnesian War – and the characters’ positions as mercenaries – has allowed Ubisoft to implement a system wherein locations throughout the world are occupied by Athenian or Spartan forces, and players can influence the level of control these factions have over their territories. This system is dynamic and changes independently of your actions, but you can help lower a faction’s influence by burning war supplies, raiding forts, stealing from treasuries and assassinating local leaders, with side quests usually sending you to locations with one of these options waiting for you. Once a faction’s influence is low enough, you can take part in conquest battles, where the faction you choose to side with determines the payment you receive from the battle. Defending territories is easier but pays less, while attacking is harder but more lucrative. There’s room for manipulation, too: you might want to sabotage a faction then help them defend because the attacking army is too strong, or perhaps let the armies fight it out themselves and intervene only for the decisive battle and the rewards. It’s not completely dynamic – it takes a long time for territories to trigger conquest battles on their own – but it’s nice to see some player agency in how you interact with the war effort.

Participating in the war effort will, however, net you a bounty. Similar to the notoriety systems in past games, being indiscrete with your murderous ways has sponsors throughout the world place bounties on your head, enticing other mercenaries to come after you. It resembles the nemesis system found in Monolith Productions’ Middle-earth games, albeit a lot less flashy in how it’s presented and not as in-depth. The mercenaries who come for the bounties all have their own unique appearance and title complete with their own special attributes, and they will hunt you tenaciously, often showing up at the worst possible times. It’s not all bad, though: killing these mercenaries or recruiting them to join your crew nets you gear and pushes you further up the rankings to become the number one mercenary.

There’s a similar mechanic in play with the Cult of Kosmos, which plays a large role in both Alexios’ and Kassandra’s stories. Outside of the narrative, players can hunt its members to their heart’s content, with the Cult made up of different “Leagues” full of members for you to assassinate before moving up. You’ll have to work for your kills though. Before you can assassinate a cultist you have to uncover their identity by finding clues throughout the world. Some clues are found by killing other cultists, others through side quests and some can be bought or found in chests. Completing each League rewards you with a set of unique high-level gear and items needed to upgrade the Spear of Leonidas. This is designed as end-game content, though, with some members story-locked and others simply too difficult to face early in the game, and it’s well-advised to leave these quests until you can adequately deal with them.

Assassin’s Creed: Odyssey also sees the naval gameplay that fans adored in Black Flag return, but it’s been revamped to fit the setting along with some new bells and whistles. Players can now customize their crew as well as their ship, choosing their appearance and recruiting from enemy ranks. Excluding cultists, almost any enemy can be recruited to your crew by knocking them out rather than killing them, and each one brings their own stat bonuses. Ship combat has also been streamlined, built around arrows for long range, javelins for close range and ramming when you want to break a ship in half and deal huge damage. Boarding is now seamless, as well: after boarding a ship, rather than being prompted with a menu, you simply collect your loot and jump back to your ship with no breaks in the gameplay. The same is true for exploration – there areno more load screens between major cities and the high seas and underwater shipwrecks aren’t linear missions; you just dive down and explore an area. 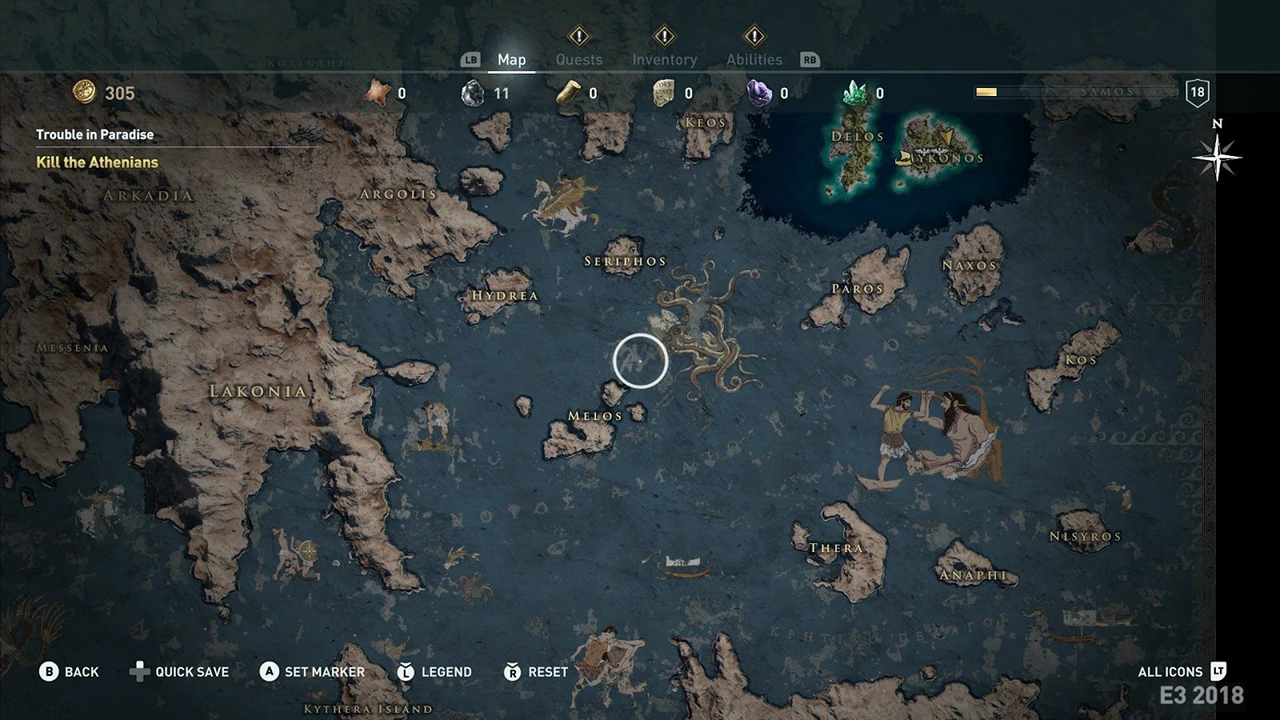 A lot of these ideas and mechanics could be the main attraction in another game and as such aren’t as fully realised as they could be. The faction system only allows you to fool around with the occupying force, there’s no burning an invading army’s supplies or anything like that. Mercenaries just appear throughout the world, they won’t attack each other and despite appearing together to hunt you they don’t actually team up outside of combat, and the moments that contribute to the overall story feel poorly placed; they’re often either too close together or too far apart for a game of this scale.

The infamous “Time-Saver” microtransactions make a return and are as insipid as ever, along with gear and item sets only available through real-money purchases. Thankfully, the game’s progression system is designed well enough to dissuade any purchase of these and – outside of one in-game tutorial prompt that comes with a generous gift of bugger all Helix Credits – you’ll never feel inclined to visit the store page at any point throughout your journey.

The biggest risk Ubisoft took with Assassin’s Creed: Odyssey was undoubtedly the story. The decision to distance this game from the series’ “Assassins vs. Templars” setup was a bold one. Outside of the modern day plot, which sees Layla return, Odyssey’s is about family and uncovering the truth about a traumatic event from Alexios’ or Kassandra’s childhood. There are some neat twists and turns, with your choices having some surprising effects on the story; even your choice of playable character has a cool little effect on certain characters. Unsurprisingly though, Ubisoft used this setup to further explore the omnipresent First Civilisation.

Following on from Assassin’s Creed: Origins’ second expansion, which took some real risks in expanding the lore – almost delving into the supernatural while using the First Civilisation to keep it grounded within what the series has presented before – Odyssey goes one step further, weaving the setting’s mythos with the series’ own lore to bring back the wonder and mystery surrounding humanity’s ancestors.

Despite not looking like an Assassin’s Creed game, Odyssey is by far the best and most feature-rich game in the series since Black Flag. It’s held back by some technical issues and a touch of over-ambition, but is still well worth the price of admission.

Ty reviewed Assassin’s Creed: Odyssey using a retail Xbox One X code purchased out of his own pocket.