This week in gaming: NVIDIA’s got new graphics cards, Nintendo’s celebrating Mario’s 35th anniversary in a huge way, and more!

NVIDIA RTX 3000 series cards give the PS5 and Xbox Series X a run for their money:

Graphics hardware giant NVIDIA kicked off the week by launching its salvo against next-generation consoles in the form of the brand new GeForce RTX 3000 series graphics cards. NVIDIA’s latest hardware boasts massive performance gains over its predecessors thanks to the company’s partnership with Samsung and its new 8nm manufacturing process.

In typical NVIDIA fashion, the company announced the higher-end lineup of the RTX 3090, 3080, and 3070, which will retail locally from AU$2429, AU$1139, and AU$809 respectively — making them cheaper than their equivalent RTX 2000 series cards. AnandTech’s table below compares the three cards to the existing RTX 2080 Ti in terms of specifications: 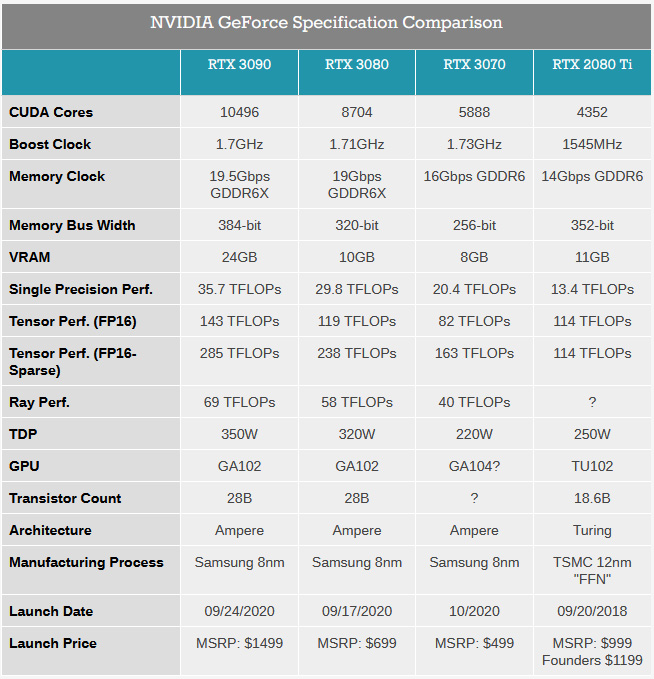 Those impressive numbers mean that even the mid-range RTX 3070 can outperform the RTX 2080 Ti at half the cost(!), and the RTX 3080 can run up to twice as fast as the RTX 2080(!); Digital Foundry confirmed both claims in certain games.

While these features will not be exclusive to the RTX 3000 series, the increase in tensor cores will result in a dramatic increase in frames-per-second with ray tracing turned on. Both the RTX 3080 and 3090 are slated to be released before the end of this month with the RTX 3070 due next month.

After much speculation and many, many rumours, Nintendo has “surprise dropped” a Nintendo Direct focused solely on celebrating Super Mario Bros.’ 35th anniversary.

First of all, the three compiled games remain mostly untouched save for upgrading the resolution, upping the aspect ratio from 4:3 to 16:9 (for Sunshine and Galaxy only) and enabling the use of Joy-Cons when playing Super Mario Galaxy specifically. This makes it disappointing for the many players who already own copies of these games on a handful of past Nintendo consoles.

The second caveat is that Nintendo has decided not to include Super Mario Galaxy 2 in this package, presumably because of complications with simulating the Wiimote’s motion controls — particularly when riding Yoshi. This means that, after September 18, Super Mario Galaxy 2 and Super Mario 3D Land will be the only two 3D Mario platformers to not be available on the Switch.

In other news, Super Mario 3D World + Bowser’s Fury, a souped-up Switch port of the Wii U platformer, was announced for a February 12, 2021 release. Nintendo didn’t provide any details on exactly what Bowser’s Fury will bring to the table, but at least we know that the Switch version will implement online co-op — which is something new to this particular iteration.

Other Super Mario surprises coming our way by March 2021 include:

A next-gen edition of The Witcher III is in development:

Riding the wave of momentum it generated by announcing the augmented reality mobile game The Witcher: Monster Slayer, CD Projekt RED has announced that it’s working on an enhanced Complete Edition of The Witcher III: Wild Hunt on PlayStation 5 and Xbox Series X.

The enhanced edition will include all of the base game and expansion content released to date, along with the standard visual and technical upgrades and improvements. CD Projekt RED plans to deliver this as a free update for anyone who already owns a copy of the game, and as a standard purchase for those who don’t. As of this writing, the developer hasn’t announced a release date, but we’ll be on top of that!

Earlier this week, Destiny 2 developer Bungie shared new information on the upcoming Stasis subclasses, the Warlock Shadebinder and the Titan Behemoth. The new ice-themed classes will come with distinctly different UIs and feature unique modifiers known as Aspects and Fragments — collectibles whose benefits and penalties impact your chosen sub-classes efficacy in different ways.

Continuing the “slow burn” strategy Bungie is taking with Beyond Light’s marketing, the studio has promised to release its third Stasis Spotlight — covering the Hunter Revenant subclass — on September 8. For now, though, you can find all of the information we’ve got on the three Stasis subclasses by checking out the dedicated Stasis Hub.

Another Ubisoft Forward event is set for September 11:

Ubisoft has become the latest in a string of studios to announce a virtual showcase in the face of the COVID-19 pandemic. Scheduled for 5am AEST this coming Friday, September 11, with a pre-show an hour before, Ubisoft Forward will feature updates to existing Ubisoft properties such as Brawlhalla and Tom Clancy’s Ghost Recon Breakpoint, as well as information and updates on new titles including Hyper Scape and Watch Dogs: Legion… as well as some hinted surprises, of course.

The livestream will be hosted at ubisoft.com/forward, with rewards available to viewers that log in with a Ubisoft account.

After having several staff members resign last week, Skullgirls developer Lab Zero Games has all but dissolved after its controversial and megalomaniacal studio head, Mike Zaimont, laid off “everyone who didn’t quit”. As of this writing, the studio (well… Zaimont) has not agreed any severance with any of the affected staff members, but given that Skullgirls IP holder Autumn Games released a joint statement with Skullgirls Mobile developer Hidden Variable supporting the staff members who stepped down and committing to working “with the many talented individuals who are leaving Lab Zero to build new Skullgirls content moving forward”, there’s plenty of hope that they’ll all land on their feet.

The Outer Worlds’ first expansion is dropping in just four days, and in this video, Game Director Carrie Patel walks us through one of the new missions in the expansion. Peril on Gorgon looks like it will centre on investigating the history of the titular asteroid and learning just what happened to the mysteriously vanished occupants.

Gamescom Wrap-up and Best In Show:

gamescom wrapped up on Monday with its Best in Show presentation, chronicling the literal hundreds of trailers released over the preceding weekend. We’ve provided a link here to the playlist for all 203 videos broadcast over the four days — we recapped the notable announcements from Opening Night Live, but there’s a lot more to see.

There’s a free public demo of No Place For Bravery coming next week:

Developer Glitch Factory and publisher Ysbryd Games are set to release a demo version of the “hardcore action RPG [that explores] the lengths a parent would go to to find their child in a war-torn world” this coming Saturday, September 12 as part of PAX Online. The demo will be available until September 20, and will see players “take [their] first steps as Thorn, a former soldier attempting to find his long-lost daughter.”

After the demo, the full version of No Place For Bravery is set for release in 2021 — as of this writing, neither Glitch Factory or Ysbryd have provided a more specific release window than that.

Reptoid Games and publisher Way Down Deep have announced a new “narrative puzzle experience following a couple’s journey to find one another in a burning city.” Set back in 1990 and “inspired by Information Society’s song of the same name”, Fire Tonight follows Maya and Devin, a young couple separated by a wildfire in their home city, as they try to find one another. Players will switch between the two characters: Maya’s gameplay is centred around “light environmental puzzles” to get her to Devin’s apartment, while Devin’s involves “[exploring] objects imbued with powerful memories” in order to learn more about the pair and their relationship. It promises to be a beautiful short story full of ‘90s nostalgia.

Fire Tonight is scheduled for release on Nintendo Switch and Steam (Mac and Windows) in the first quarter of 2021.

[…] Announced just a couple of weeks ago, this is the first look we’re getting at the update that’s coming to Left 4 Dead 2 on September 24, the work of more than 30 members of the Left 4 Dead community with Valve’s blessing and support.  […]

[…] Lab Zero Games studio head Mike Zaimont essentially dissolved the company amidst allegations of misconduct from staff members, the 16 employees who were left without jobs […]