This week in gaming: NVIDIA unveils its next generation of graphics cards, Twitch Prime loses some features, we’ve got new DualShock 4 controllers, and more!

The graphics hardware manufacturer kicked off Gamescom with a special announcement event where it debuted the first its consumer-focussed GeForce RTX graphics cards: the 2080Ti, 2080, and 2070. The new “Turing” generation cards are especially designed to handle real-time ray tracing (hence “RTX”), which is a resource-intensive lighting technology that has been a staple of 3D animated Hollywood films but has proven impractical for existing consumer hardware.

NVIDIA has named this technology as the “greatest leap [in graphics] since [the] 2006 CUDA GPU” and demonstrated the new graphics cards’ prowess with modified benchmarks that the public criticised for not showing how they perform in existing games. Since then, NVIDIA has released new benchmarks (via Eurogamer) that directly compare the RTX 2080 against the older GTX 1080 (but not 1080Ti), with the company claiming that the new card is twice as powerful as its older twin at 4K resolution: 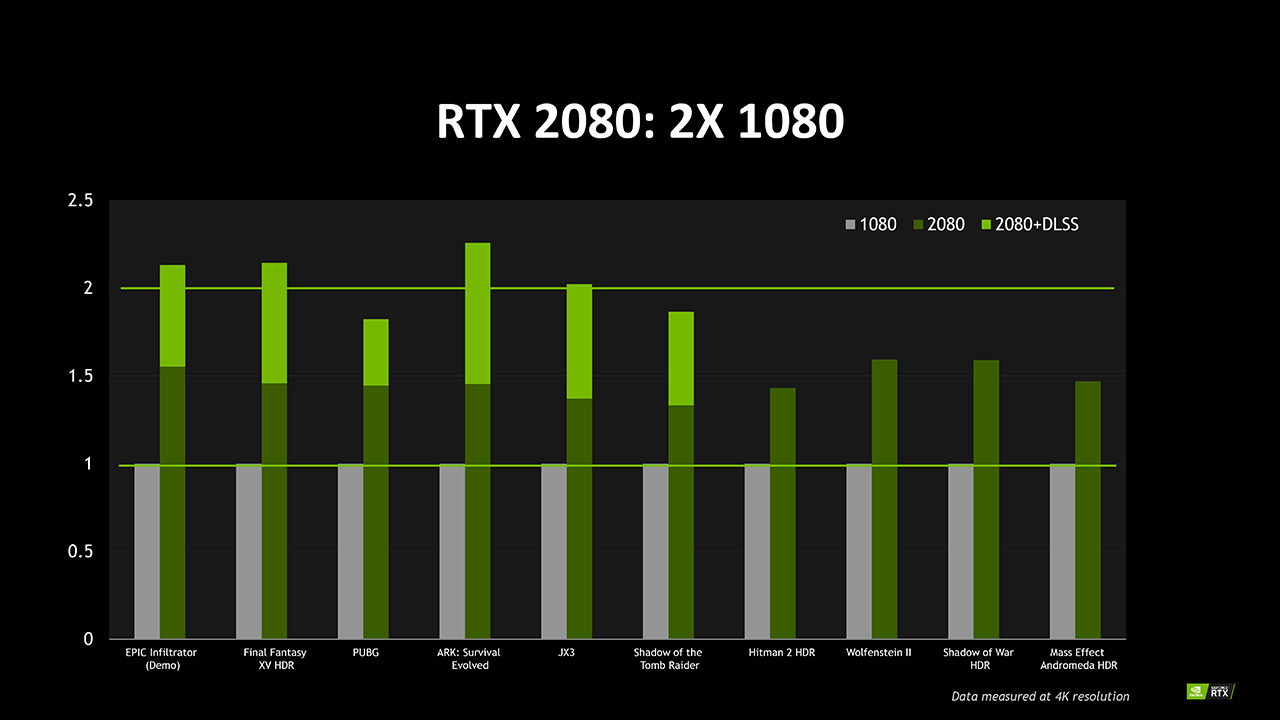 At the event, NVIDIA showed off RTX demos for Battlefield V, Metro Exodus, and Shadow of the Tomb Raider:

Not long after the announcement event, NVIDIA confirmed that “RTX-enabled” games may not actually use ray tracing (via Overclock3D) and that the term is brand mark to denote that a particular game is using one of its new AI-powered graphics technologies.

In a short news post earlier this week, the developer announced that it will gift Fortnite Battle Royale players with a free “Boogiedown” Emote if they enable two-factor authentication on their accounts:

Life is Strange 2 has its first official trailer:

After months of teasers and information, we’ve finally got a reveal trailer for Life is Strange 2, which publisher Square Enix revealed will follow 16-year-old Sean Diaz as he looked to get his 9-year-old brother, Daniel, from Seattle to Puerto Lobos, Mexico, to start a new life after “a tragic event.” Sean will need to protect Daniel from the world around him, but also guide and educate him as they make the 1,662 mile journey. The game will also feature a new power, but Square Enix didn’t say anything else about it.

The first episode of the five planned is set to be released on PC, PS4 and Xbox One on September 27.

Twitch announced the change this past Monday, revealing that “universal ad-free viewing will no longer be part of Twitch Prime for new members, starting on September 14.” Members with monthly subscriptions will continue to receive ad-free viewing privileges until October 15, while those with annual subscriptions (or those who upgrade to one before September 14) will continue to avoid ads until their next renewal date.

All of Twitch Prime’s other benefits, including monthly subscription tokens, monthly game and loot offers, chat badges and Amazon Prime’s many benefits (which vary between marketplaces), will still be available, and Prime members can use their subscription tokens to unlock ad-free viewing if their chosen streamer supports it. Those who wish to continue enjoying ad-free viewing all over Twitch will need to subscribe to Twitch Turbo in addition to their Prime Subscription.

On top of these changes, Amazon itself has revealed that it is reworking its 20% discount on game pre-orders for Prime subscribers into a $10 store credit with pre-orders of “select video games”, a change that will also be applied to Twitch Prime members.

Developer IO Interactive has announced that it will remaster the missions from 2016’s HITMAN reboot within HITMAN 2: World of Assassination including adding in all of the new weapons and mechanics from the sequel. While this move doesn’t quite fulfil the studio’s original ambition of turning HITMAN (2016) into a platform upon which it adds new content, it does establish the upcoming title as a base for multiple seasons of artistic assassinations.

Having released Dark Souls: Remastered earlier this year, publisher BANDAI NAMCO has revealed that it is releasing both the remastered game, its sequels, and all released downloadable content as a collection on PlayStation 4 and Xbox One this October.

In the latest of its twice-yearly “Indie Highlights” presentations earlier this week, the gaming giant announced 15 (yes, fifteen) new indie titles that are coming to the Switch in the near future. The first three of those titles are available now, with Bad North, Morphies Law and Prison Architect headlining the latest eShop update. Among the highlights of the upcoming titles are SNK’s frisbee-themed Windjammers and its sequel, Windjammers 2 (which was announced in the presentation), 11 bit studios’ phenomenal Bosnian War title This War of Mine, and the always expected Switch version of Terraria.

Here’s a full list of the titles announced in the presentation, which you can watch in full on Nintendo’s YouTube channel:

Artplay co-founder Koji Igarashi made the announcement in a Kickstarter update earlier this week, explaining that much like the game’s first delay (from March 2017 to “early 2018”), the studio has delayed Bloodstained: Ritual of the Night again predominantly “to raise the quality level, especially after all the very valuable feedback from the Beta Backer Demo.” The game is now slated to launch at some point next year.

Igarashi also announced that Artplay is no longer planning to launch the title on PlayStation Vita “largely due to Sony’s plans to discontinue the Vita console,” with 505 Games global brand manager Roberto Piraino calling it “an unfortunate but necessary decision to make.” Those who pledged for a Vita version of the game are now able to request a refund for their pledge, or change to a different version of the game; it’s still set for release on PC, PS4, Switch and Xbox One!

The company took to its official European Blog earlier this week to announce that the three new colourways will launch throughout October, with Blue Camouflage launching on October 12, Berry Blue on October 23 and Copper on October 30.

Sony is also planning to re-release other limited edition colours alongside the latter two, with Sunset Orange launching on September 18 and the Copper controller launching as part of a metallic range alongside the previously-released Gold, Silver and Steel Black controllers.

All of these controllers will be available in retailers around the world, at their recommended retail price in each different region.

This quick trailer showcases the kind of graphical quality that’s possible when you’ve got “native 4K resolution, High-Quality Anti-Aliasing, Proven Ambient Occlusion and many other high-end features” to work with at launch, with NVIDIA’s Ray Tracing technology to come in a post-launch update.

Dying Light fans will enjoy this look into the horrors that come out to play when the sun sets on the beautiful little settlement that Artyom and his friends have found.

Among other things, Avalanche Studios Narrative Director Omar Shakir guides us through a look at how the tornadoes that tear through Solis can present “unique and brand new gameplay opportunities that just aren’t available in any other video game”.

Players can now play out Clarkson, Hammond and May’s unique brand of reckless entertainment, visiting locations and driving cars direct from the show.

The crowdfunded action RPG comes to us from OtherSide Entertainment, a studio founded by industry veterans Paul Neurath and Warren Spector (whose credits include System Shock, Thief, Deus Ex and Epic Mickey among others). Returning to the Ultima series’ Stygian Abyss, players assume the role “The Ascendant”, the only person capable of stopping Zeus’ nemesis, Typhon, as they aim to do just that.

The game is set to be released on November 15.

Free Lives and Devolver Digital have released a new update for the VR blockbuster, which includes a new champion, the Crab, as well as a new crab claw caestus, new heavy armour for enemies, a revamped arena and plenty of performance improvements. It’s also now available on the Oculus Rift App Store alongside Steam Early Access, and to celebrate, the studio and its publisher have knocked 25% off the asking price.

HBO and Devolver Digital come together to release Reigns: Game of Thrones:

Players on Android, iOS and Steam will be able to take Reigns’ rule-by-Tinder gameplay into the Seven Kingdoms of Westeros this coming October, swiping their way through the lives and work of Cersei Lannister, Daenerys Targaryen, Jon Snow, Sansa Stark, Tyrion Lannister and more as they aim to stay on top of the Iron Throne.