2016’s DOOM is widely considered to be one of the best shooters of the current generation, and for good reason. It thrusted the classic first-person shooter franchise back into the limelight, and only reinforced id Software’s incredible pedigree within the industry. Fast forward almost four years, and the long awaited sequel, DOOM Eternal, has finally been released, promising to be bigger, better, and more campy than ever. As a massive fan of 2016’s reboot, I was excited to see what the sequel would bring to the table, and I can assure you that the wait was more than worth it.

Set roughly eight months after DOOM’s cliffhanger of an ending, DOOM Eternal follows the Slayer’s attempt to thwart Hell’s invasion of Earth. While it’s unknown what transpired in the months leading up to Earth’s invasion, you’re thrown right into the action, tasked with tracking down and killing three Hell Priests to halt the demonic consumption of Earth. While it’s initially simple stuff, it goes without saying that it gets more complicated when other factions start getting involved. Unearthing how the Sentinels and the Maykrs (DOOM’s equivalent of angels) are interwoven into what’s happening to the world is genuinely interesting, and while many of the questions posed remain unanswered by the time the conclusion rolls around, there’s plenty of lore and in-game storytelling to sink your teeth into for those juicy tidbits of info you might be craving. As outlandish and campy as DOOM Eternal’s narrative can be at times, it serves as an engaging backdrop to the carnage that the franchise is known for.

DOOM Eternal takes what made its predecessor so good and builds upon it in meaningful ways that keep the gameplay loop familiar, but infinitely more engaging. The three pillars at the core of it all are combat, exploration, and resource management. While resource management sounds out of place in a franchise known for its violence and gore, that couldn’t be further from the truth: keeping alive in DOOM Eternal comes down to more than just staying on the move — it’s all about taking what you need from demons in order to survive. Much like in DOOM (2016), you perform hyper-violent executions called Glory Kills for health, Chainsaw demons for ammo, and new to Eternal is the Flame Belch, which sets enemies on fire, causing them to drop armor as they burn and explode into a fountain of the stuff if they happen to die while they’re alight. It sounds simple in premise, but when 15 or more demons are coming at you from all angles it’s never quite that simple, and getting into the rhythm of things can be a bit tricky at first. DOOM Eternal can be very difficult, but once you get the hang of it, you’ll never be able to go back.

There’s an immensely cerebral quality to Eternal’s combat loop that’s unparalleled in the genre today, and it’s further punctuated by the addition of the new weak point system and Ice Bomb. The weak point system adds another layer onto combat that keeps you from mindlessly pulling the trigger. Each of the heavy demons have weak points or shortcuts you can utilize to make quick work of them or render them relatively ineffective in combat. Things like firing off a grenade or sticky bomb into a Cacodemon’s mouth to stagger it, opening it up for an instant Glory Kill, or the ability to shoot off Macubi arm cannons and Arachnotrons’ head turrets. The Ice Bomb is exactly what it sounds like: a bomb that freezes enemies in place, adding another wrinkle to the combat loop. 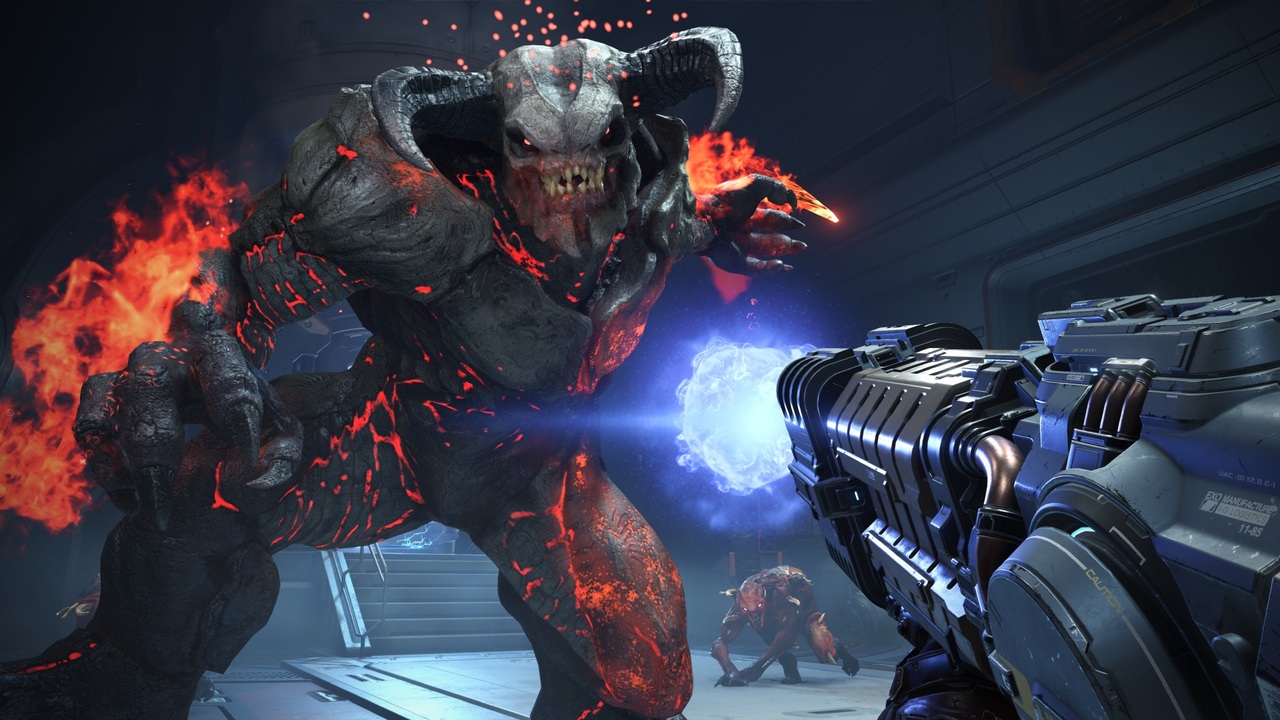 Of course, none of this would matter if DOOM Eternal didn’t have a killer arsenal to back it up; needless to say, id Software has delivered again. While the core weapons largely remain the same as DOOM (2016)’s lineup, all of the armaments have undergone a visual change and modifications to their alternate fires. Each gun (bar the super weapons) has two mods that you can freely swap between and upgrade once you have them unlocked. While some of them certainly feel more niche than others, there’s no denying that each one has its own place in the combat loop. All of this comes together to create a combat system that’s punchy, responsive, empowering, and challenging all at the same time. It makes you feel like the smart and calculated killing machine that the Slayer is made out to be and I’ve never experienced anything like it.

Although your movement speed is slower than it was DOOM (2016), DOOM Eternal more than makes up for it with a new dash ability that allows the Slayer to evade enemies and complete platforming sections. Exploration has always been a big part of the DOOM franchise, and Eternal is no different. Scattered all over every level are Praetor Suit Points, Weapon Drones, Runes and collectibles that can be displayed in the Fortress of Doom, which is basically the Slayer’s very own man-cave. Not only do all of these collectibles create a strong sense of progression, but it gives you reason to explore the levels and uncover the secrets they have to offer. There’s also additional Secret Encounters and hidden Slayer Gates throughout the game, and completing all of these will net you rewards that make the effort well worth it. Most of the platforming isn’t overly challenging, but it does keep you engaged when outside of combat, which keeps DOOM Eternal from ever falling into a dull moment. Similarly, level design is excellent across every mission in the game, and the visual variety found from stage to stage is astounding. 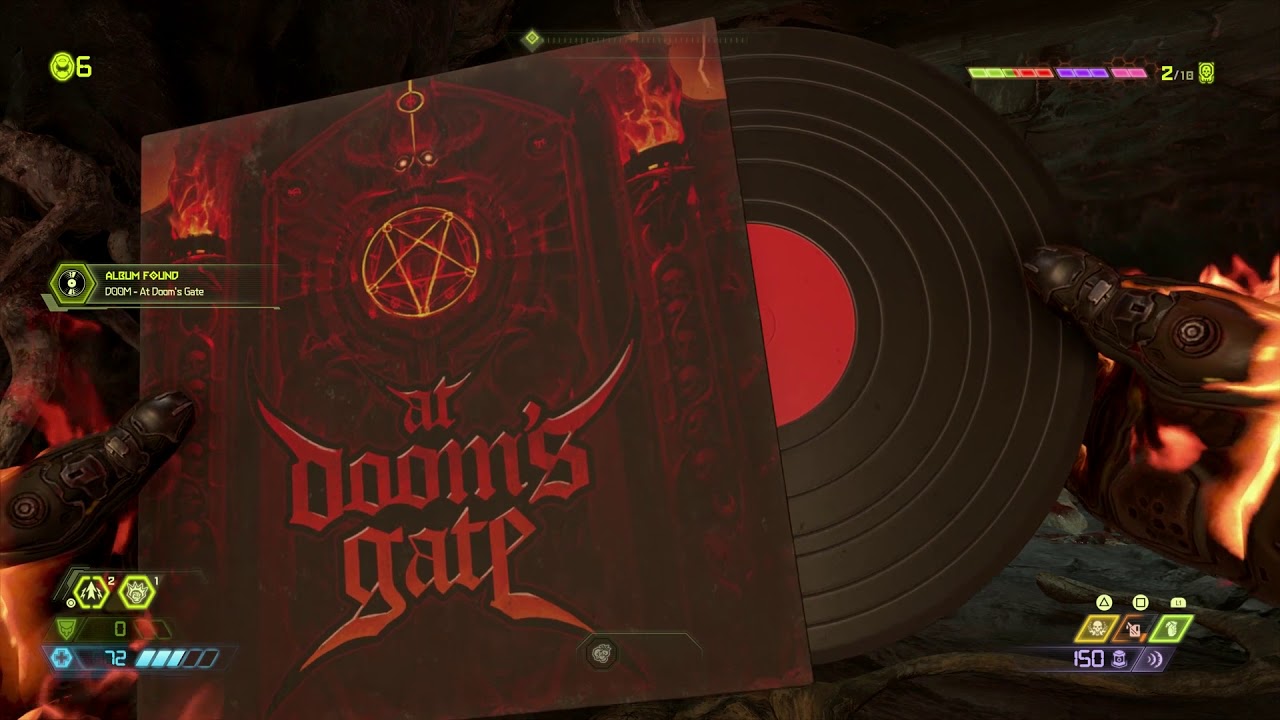 Once you’ve had your fill of the campaign, DOOM Eternal also offers a multiplayer mode called Battlemode, in which one fully equipped Slayer is put against two player controlled demons. Each of the five playable demons have varied skill sets and excel in particular areas. There are certain pairings that definitely fit better than others, but that’s just one wrinkle on Battlemode’s depth. Demons can temporarily block the Slayer’s loot, halting all ammo, health, and armor drops for a short amount of time; summon AI-controlled heavy demons to do their bidding; and place environmental hazards to control areas and manipulate the Slayer. I’ve played about five hours of Battlemode and I feel like I’ve barely scratched the surface, it’s extremely unique and I implore you to try it after your time with the campaign.

One thing that id Software almost always gets praised for regardless of anything else is its technology and presentation. DOOM Eternal is running on the brand new id Tech 7, and the game looks absolutely gorgeous. I’ve been playing on PC with a 1070 TI and the game has run near flawlessly on high across my 40+ hours with the title. The levels are packed with detail, enemy models are incredibly expressive, and the game’s overall art direction can be truly jaw dropping at points. There were several moments where I stopped to take it all in, and I’m sure the game looks just as fantastic on console. On top of that, once again, Mick Gordon has knocked it out of the park with a killer soundtrack to rip and tear to.

Unfortunately I did experience a few bugs during my playthrough: there were a few occasions where I’d have to restart an entire combat encounter because the way forward wouldn’t open, and I had a few unexpected crashes, but those were few and far between and I suspect that they’ll be rectified pretty quickly. 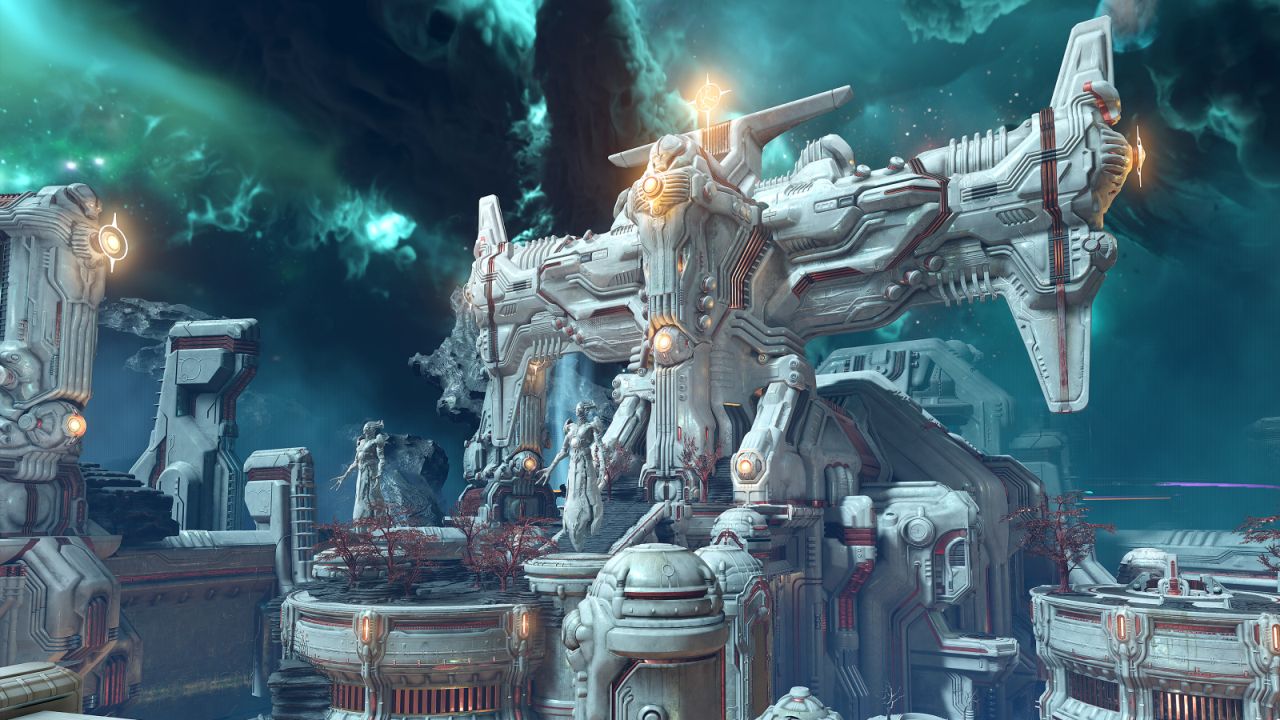 All of DOOM Eternal’s new and returning elements come together to create a truly compelling package. id Software has clearly listened to the fans and delivered an experience worthy of the DOOM moniker. It’s a celebration of everything that can go right in a triple-A title in the gaming industry today, and you owe it to yourself to experience one of the most thoughtful and well-designed shooters of this generation.

DOOM Eternal is one of those games that comes around every five years, one that fundamentally reshapes the genre it hails from and sets a new standard for every game to follow in its footsteps. id Software has once again proven that there is and always will be a place for DOOM in the industry. It builds on what made 2016’s reboot special in every single way, and then some, delivering not only one of the best games of this generation, but arguably the best first-person shooter ever made.