It’s a fun movie, but it’s all about the fan service.

Detective Pikachu is a fascinating movie right from the production process. The journey that Pokémon went on to go from a game about capturing taser-mice, to a whodunit mystery story about that same taser-mouse solving crimes must have been fascinating. Alas, I haven’t played through the series in order to see it.

Despite that, I did go and see the movie. It stars Ryan Reynolds and Justice Smith as Detective Pikachu and Tim Goodman respectively (it’s incredibly difficult to care about any of the humans in this movie, beyond knowing their names). There’s also a really terrible journalist, Lucy Stevens, who is convinced that she’s about to break Watergate without any actual sources or credible information. She’s by far the worst character, I don’t know why she’s there. She has a Psyduck though, so that’s nice. That about rounds out the main characters; everyone else is secondary.

Warner Bros. made a brilliant choice adapting Detective Pikachu rather than telling the story of the Western-released games or the TV show, since it manages to draw casual viewers and outsiders, as well as the hardcore fans. For example, I had no real knowledge of Pokémon before going into the cinema; I know the three starters from Pokémon Red and Blue, and I know all about the Pikachus, but that’s the extent of my knowledge, so I was psyched to learn a little more about this crazy trend all you kids are on about these days… But I left more confused than ever. I still thought there were only 150 of the weird monster things. 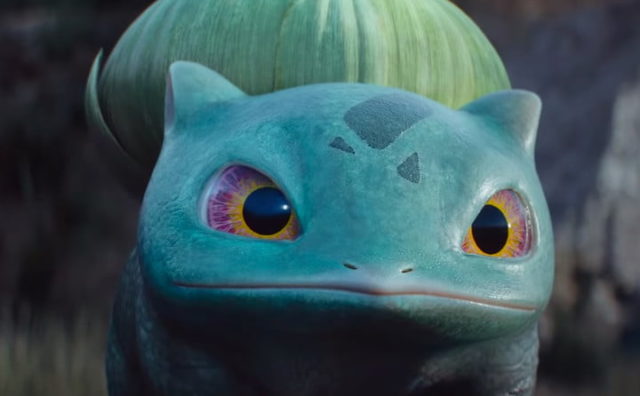 Big eyes and a wide smile is the cheat sheet for making something cute.

For most viewers, the Pokémon themselves will serve as the movie’s real draw. They’re visually stunning, and while I didn’t fully understand or know what any of them represented in terms of the story, I appreciated looking at them. Some of the fuzzy ones are incredibly cute and I had to go inject testosterone into my biceps to feel like a real manly man again afterwards. (There’s also a Lickitung at the start, which is just horribly disturbing and a terrible way to start a movie. As a favour to the director, we’ll just move past that.)

The story is shockingly decent, for a mystery story aimed at children. There are a couple standard twists that you can see coming from a mile away, and one that I probably would have seen coming if I had known more about the franchise, but blindsided me. I love a decent mystery story and there are less and less of them being released, so I was just thrilled that the movie stuck to the format of a who-dun-it. At no point does a character bring out a phone to tell you they’ve solved the case with information you didn’t have! I’m looking at you, Sherlock.

The movie is clearly designed for Pokémon fans, and you can taste the fan service even without understanding it. There are huge set pieces designed around “oh my god, it’s a Tarantulexatron”, clearly expecting the audience to understand what that means; I didn’t, so a good chunk of the movie went over my head.

Charizard’s getting ready to cook some dinner.

Much like all superhero movies made after 2008, the movie was fine but not brilliant. Ryan Reynolds is as charming and sarcastic as ever, providing a good chunk of the movie’s humour, and with the exception of Lucy Stevens – although I’m sure Kathryn Newton did the best with the character she was given – the supporting cast is great as well.

It’s a decent enough movie to put on, turn your brain off and enjoy the fuzzy taser-mouse with Ryan Reynolds’ voice, but if you’re not already a Pokémon fan, it’s not for you. Just go and watch that 10 hour video of Detective Pikachu dancing.

[…] joined the Press X to Adapt party, discussing Detective Pikachu from his perspective as someone who doesn’t know all that much about […]