Released in Japan back in February and having only made its way to the West late in August, Compile Heart’s latest release, Death end re;Quest 2, fills a very specific niche: it’s a JRPG with a horror theme. If you’re a fan of both of those things — or just anything dark and malevolent — then this game is well and truly worth your time.

The game puts you in the shoes of Mai Toyama, a teenage girl with an abusive monster of a father, few friends to speak of outside of her sister Sanae, and a bleak outlook on life in general — her only real goal in life is to visit Enigma Games, the developer of a virtual reality MMO that she managed to hack into at one point. Things come to a head when her father, in a drunken stupor, decides that he’s going to kill her. Mai beats him to the punch, killing him with a hatchet. Alone in the world and free to do as she pleases, she decides to go looking for Sanae, a journey that takes her to the Wordsworth Dormitory in the creepy, remote mountain village of Le Choara, a haven for bullies who immediately attempt to dominate her and make her feel as bad as she did back home.

Up to this point, Death end re;Quest 2 is essentially a graphic novel with plenty of moody characters and a few narrative choices for you to make, but it takes an unexpected turn when night falls; Le Choara is a hellscape infested by monsters, and Death end re;Quest 2 has you exploring it in a three-dimensional adventure mode. The nighttime gameplay is the real core of the game, with plenty of room for exploration, puzzle-solving and, of course, combat — and it’s all informed by what you’ve done that past day. 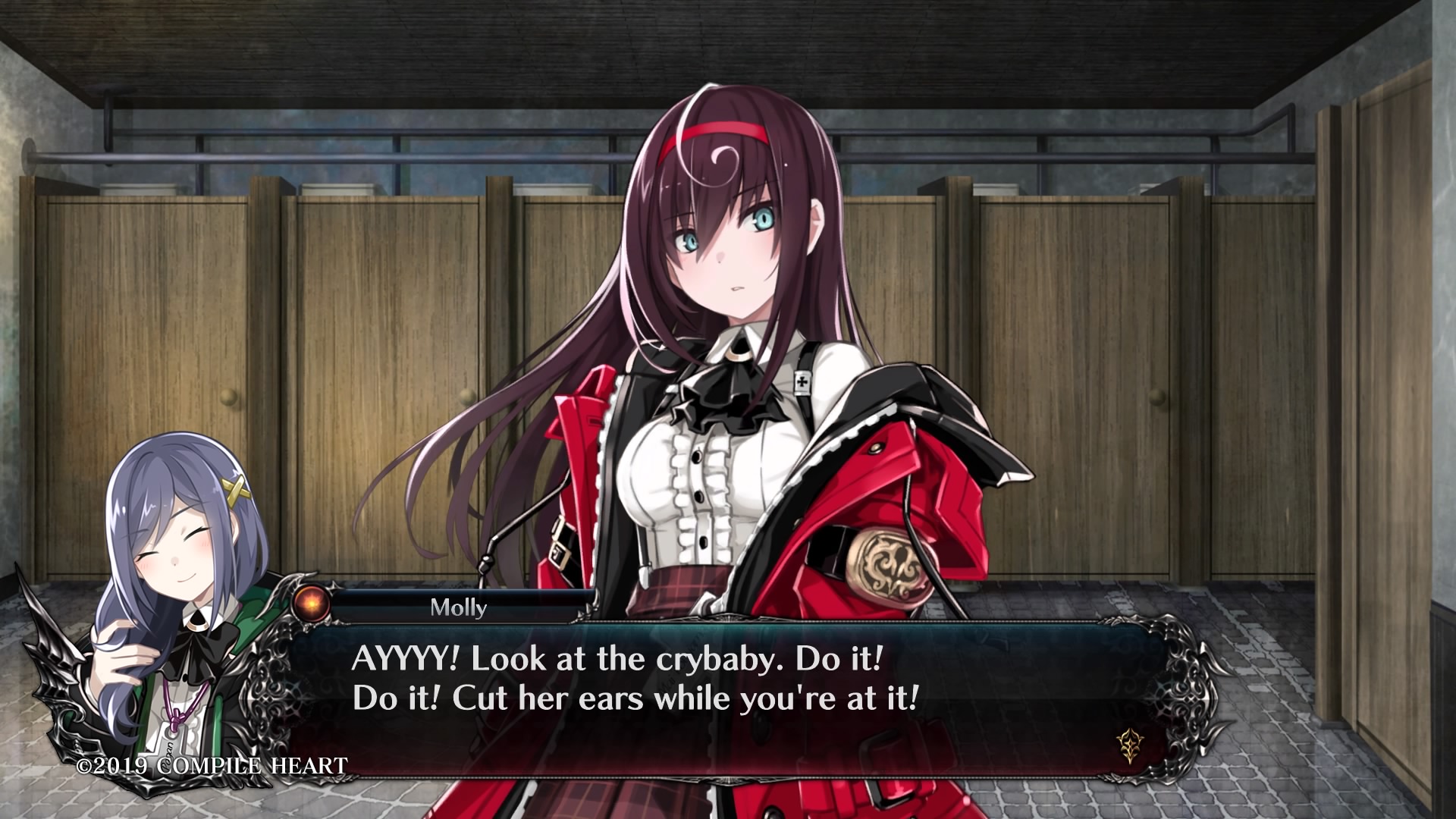 You’ll spend your days running through a day in the life of the Wordsworth Dormitory, meeting various residents, staff and other characters. Rather than forcing players into a linear narrative, though Death end re;Quest 2 leaves you in full control of the specifics: what you do and who you talk to is your decision to make, and those decisions create narrative arcs that really do play into the action that unfolds at night. The daytime gameplay is slow, focused almost entirely on text boxes, but the story is engaging enough that JRPG fans will be happy to work their way through it in anticipation of what’s to come that night; either way, some of the exchanges Mai has with her friends — and even her rivals — are pretty damn funny, even bordering on risqué, so it’s not like Death end re;Quest will bore you.

Of course, the daytime bullying is the least of Mai’s problems. People from the Wordsworth Dormitory and the surrounding town are constantly subjected to some bizarre supernatural machinations, spending most of their time hoping that the (admittedly pretty cool-looking) demonic denizens of Le Choara don’t abduct them. The eerie vibe throughout Le Choara at nighttime reminds me of some earlier incarnations of Silent Hill, though perhaps not quite as chilling, with a foreboding evil light bathing the town as you meander around, monstrous tentacles popping up in all sorts of places and random wandering demonic beasts. Naturally, Mai has the skills to defend herself when a demon does attack, so you can choose to go on the offensive as well: when you do physically touch one of the demons, the game will launch you into a classic, Final Fantasy-esque turn-based combat sequence.

Death end re;Quest 2’s combat system is largely similar to its predecessor’s, but with a whole hell of a lot more attack types, magical spells and special kills added to the mix. On top of that, you’ve got a couple of neat tricks up your sleeve: the bizarre “glitch mode” sees your characters transforming into demonic alter-egos of their own, complete with more vicious, primal movesets; and there’s a variety of new finishing moves that bounce your enemies around the arena like a set of billiard balls, crashing into each other as they take massive amounts of damage. Although I haven’t had the chance to play the original, so I can’t comment on how well it evolves the Death end re;Quest combat formula, I can say that in a vacuum, Death end re;Quest 2’s combat works extremely well. 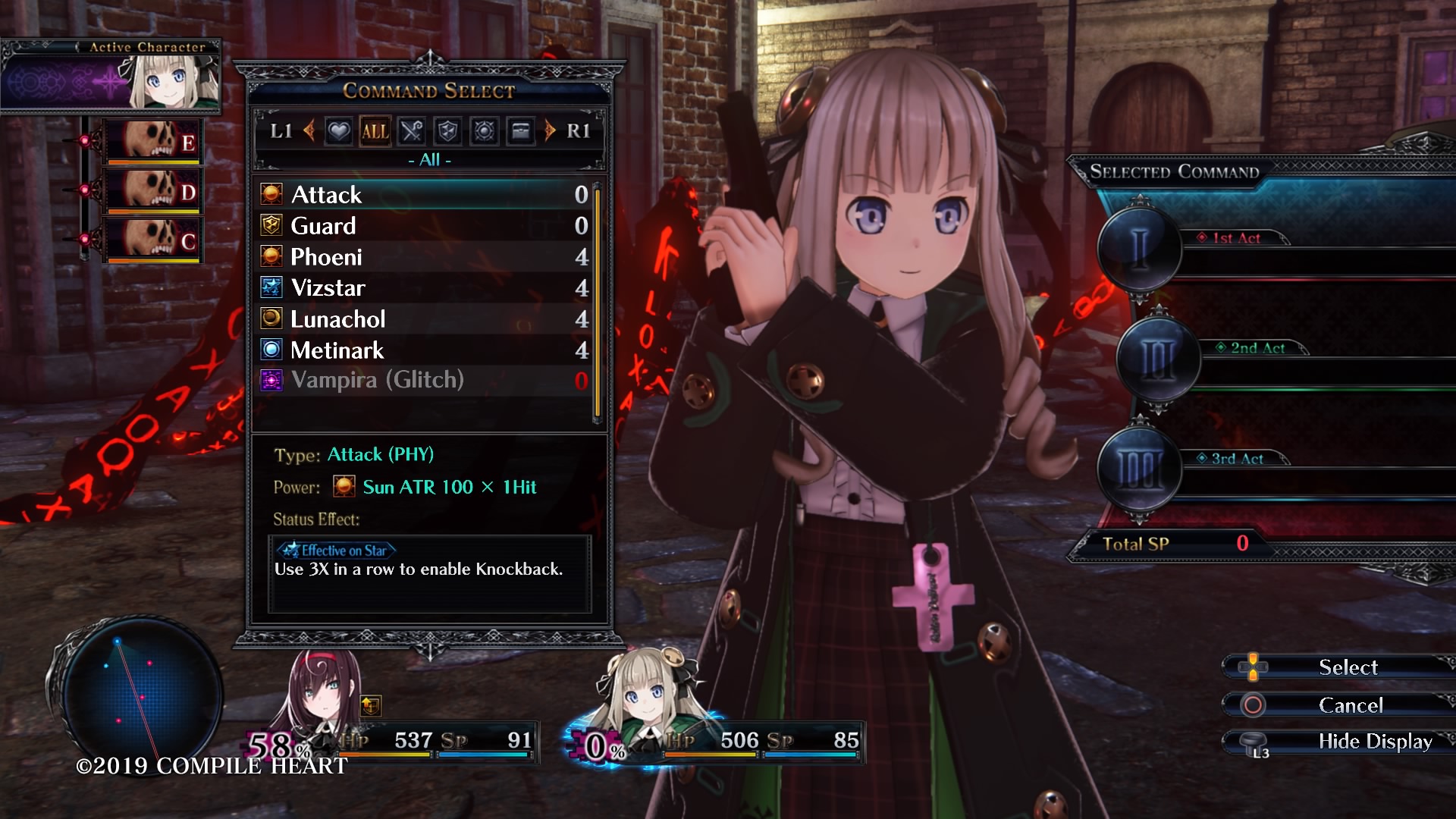 There’s a huge variety of strategies you can implement on your own, but you’ve got even more options — in the form of spectacular team kills — once other characters join the fray. Your most frequent companion is the emotional Rotten “Rottie” Dollhart, daughter of the Dormitory’s headmistress and a very kind, supportive friend to Mai despite the rather odd name, but you’ll meet other friends and companions over the course of the game, most notably the laptop that’s haunted by the consciousness of a character from the original game and comes complete with said character’s smart-alecky wit. On top of that, you can also befriend a number of monstrous companions throughout the story. Known as Adepts or “Buggies”, these creatures will not only shield you in combat, but they’ll also help add power to your attacks over time, adding yet another layer of choice to the combat system; it’s clear that variety was a major focus point for Compile Heart, and the studio has nailed it.

The massive selection of attacks and strategies available to you in Death end re;Quest 2 means that there’s plenty of room for experimentation in the early game to figure out what suits your preferred play style, so it’s fortunate that the combat is pretty easy to learn your way around. You can choose to learn the very basics and then move along with the story, or you can choose to grind away early on, invoking random attacks to build a little experience buffer — the latter option feels a bit like you’ve put in a few cheat codes, but the combat is still enjoyable… and choosing that option will hold you in good stead later on in the game, when the going gets a whole hell of a lot tougher.

Of course, Death end re;Quest 2 is a role-playing game, so you’re not just gaining your strength by levelling up: there’s a huge selection of items you can collect to buff certain stats, an arsenal of new weapons to try out. RPG purists among us will find themselves a little disappointed that you can’t choose which of your characters’ attributes you want to enhance when you do level up, but there is still plenty of room for customisation — so long as you’re willing to put in a bit of extra time playing around with new items, skills and spells and seeing what fits together and what doesn’t. 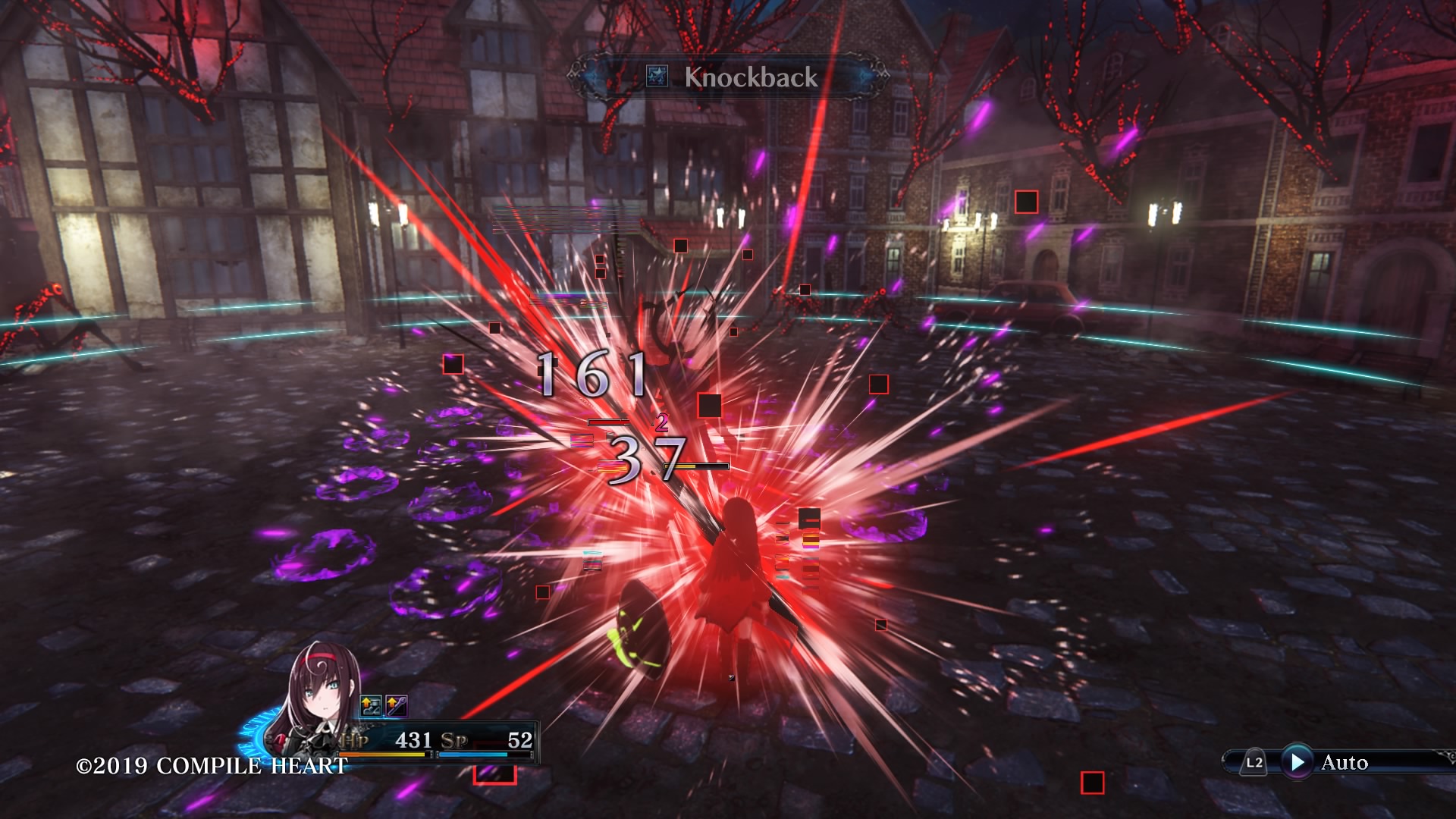 Artistically, Death end re;Quest 2 is a dark, foreboding game, but the vast majority of its cast is colourful enough to contrast against that darkness and maintain that dichotomy between “wholesome teenage boarding school” and “Buffy’s worst nightmare”. My daughter was quick to point out that the game’s artistic approach resembles the “gacha” style of animated art, which she’s obsessed with at the moment. Don’t let that cutesy art style fool you, though; the game is rated MA 15+ here in Australia for a reason — there’s also a very dark overtone to the animated sequences that matches the game as a whole, and there are some pretty intense moments in the narrative (outside of the whole “getting attacked by six hundred demons” thing). Regardless, there’s a lot of flair to be found in the wait Compile Heart has presented the characters, especially when compared to the aura of fright and mystery that is Le Choara.

Following on with this dichotomous design, Death end re;Quest 2’s soundtrack is made up of two very distinct styles. In combat, it treats us to a cacophony of symphonic house, breakbeat and techno that’s sure to get you pumped up and moving quickly, while the conversations are often set to a background of more restrained classical music that helps you focus on what’s going on. Unfortunately, the music sets the stage for voiceover work that shows a dichotomy of its own — sometimes it’s solid, and other times you can just imagine the actors reading their lines into the microphone while imagining they were literally anywhere else. Core characters like Mai and Rottie are brought to life with real conviction, though, so although it’s definitely disappointing, there’s room to forgive the less-than-stellar work that’s gone into some of the lesser characters.

Although, for the most part, Death end re;Quest 2 is a well-produced game, there are some design issues to cover, namely when it comes to navigating around Le Choara. Since there is no easy way to keep track of your objectives, you’ll often find yourself wandering around Le Choara and the surrounding forest without a clear indication of where you’re supposed to be going or why. You’ll often end up having to go back-and-forth between gameplay and the map, exploring a number of different areas and backtracking through monster encounters until you figure out what the game wants you to do next — an issue that Compile Heart could easily have prevented if it had put a little more thought and time into the map and navigation design. Of course, backtracking through monster encounters isn’t necessarily a bad thing since the combat is so much fun, but it does impact the immersion a little. 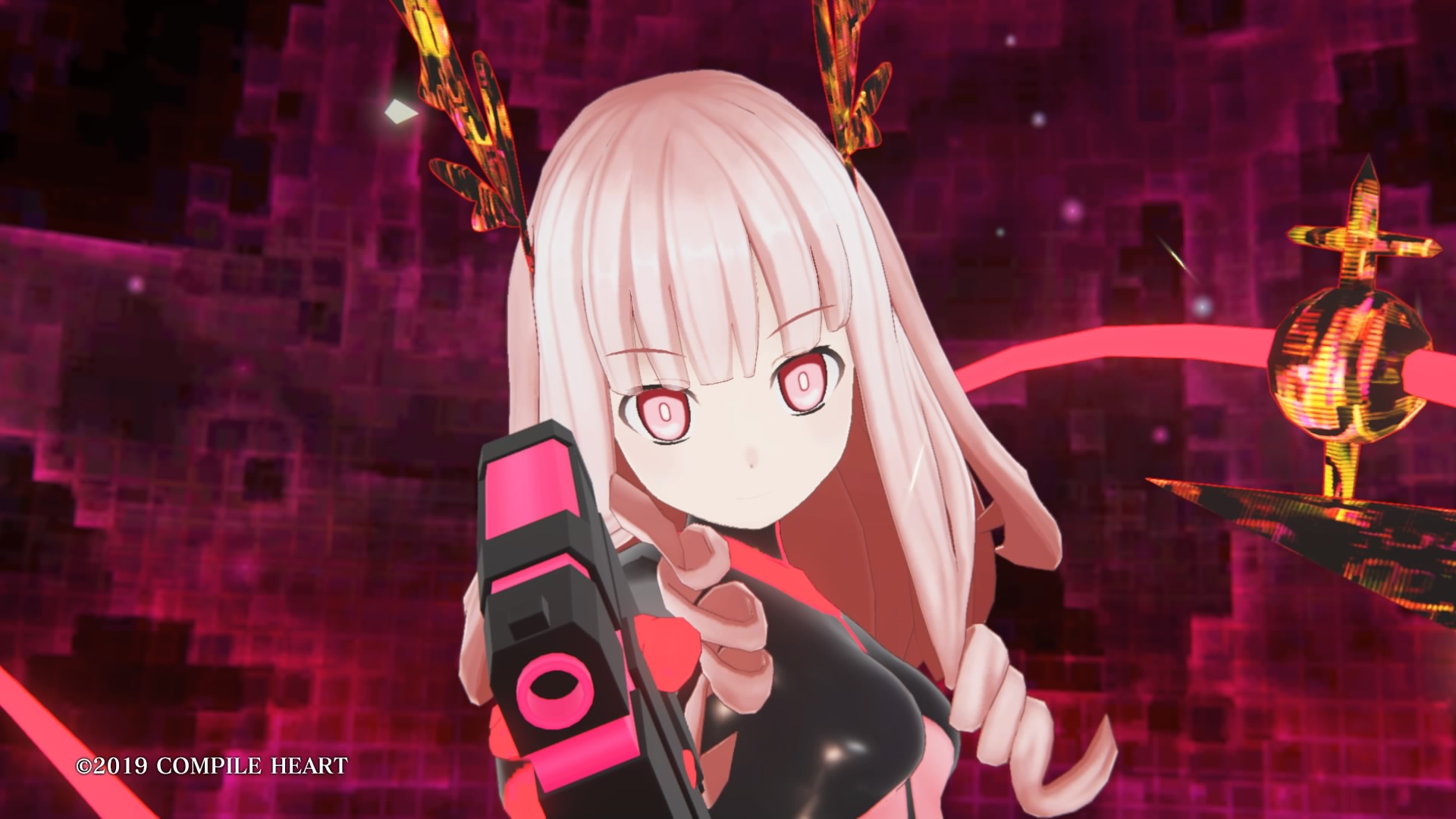 Despite these few issues, though, Death end re;Quest 2 is a very good JRPG. It’s got a bizarre yet intriguing story with plenty of replay value owing to its many different narrative arcs, it gives you a great sense of agency, and there’s a whole lot of thinking to be done when it comes to finding your ideal kit. If you’re a JRPG fan, or a fan of anything on the darker side of life, it’s well worth taking a look at — as long as you’ve got a bit of patience.

Death end re;Quest 2 is both brave and surprising. It’s got a strong sense of direction and it exudes Compile Heart’s confidence in its idea and narrative, which complements a powerful combat engine that encourages creative experimentation. It’s definitely one for the more patient players, but any JRPG fan — or anyone with an open mind — would do well to pick it up.