Crash Bandicoot 4: It’s About Time is fantastic. If you’re a fan of the PlayStation originals, or of platformers in general, you’ll love it, no question. Toys for Bob has done an amazing job revitalising the gameplay that made the originals great — it’s the same hard-as-nails, pixel-perfect platformer we remember from the ‘90s, but now with better visuals and some new additions that feel right at home. Even with a few issues here and there, it’s undeniable that Crash is back.

The story picks up after Crash Bandicoot: Warped, with villains Neo Cortex and Nefarious Tropy escaping their prison to conquer the multiverse. It’s up to Crash, Coco and everyone else to stop the duo by collecting the quantum masks and closing the rifts in space and time. The story gives rise to cutscenes after certain stages that play out like a Saturday morning cartoon, and although the premise isn’t all that deep, it gives Crash the chance to go anywhere. At one moment, you’ll be frolicking along series staple N.Sanity Beach, and the next you’ll be in a futuristic fantasy, spinning and sliding into robotic trash-cans. Each of the 11 worlds has its own identity, and they’re all brisk enough to beat before they can ever become stale.

Either way, it’s unlikely you’ll get tired of any level considering how good everything looks. With fun and vibrant visual design, every character has, well, character. The worlds are whacky and the enemies are creative, helping to push that Saturday morning cartoon aesthetic. It’s always pretty, and that’s pretty good.

Despite being a modern release, Crash Bandicoot 4: It’s About Time does a great job of staying true to the Crash Bandicoot gameplay we all know and love. The fixed behind-the-back camera and hallway-style level design are back, and enemies still march back and forth and side to side waiting for a certain bandicoot (or two) to jump, duck, slip, slide, and slam to victory. The pixel-perfect platforming for which the series developed its reputation is alive and well, and the game offers plenty of collectables to collect and rewards to rock, including a massive 58 costumes at launch. If you’re an old-school Crash fan, Crash Bandicoot 4: It’s About Time feels like home, but better. Of course, with two decades and three console generations between mainline releases, it goes without saying that Toys For Bob has taken a few steps to bring Crash Bandicoot 4: It’s About Time into line with modern expectations. Accessibility has been a major focus within the games industry of later, and this game is no exception, with a new, developer-recommended “Modern” mode doing away with the limited-lives system of the past; the levels here are longer than they’ve ever been while still being quite difficult, so it makes sense for Crash to be able to come back as often as necessary. Additionally, Crash’s shadow now has a yellow ring when jumping, which assists with depth perception by showing players exactly where they’re about to land. Both of these changes are clever, and fantastic for accessibility, but more importantly, they’re optional — those who prefer old-school lives and the regular shadow for more of a challenge can just pop into the options menu and change over.

The game hasn’t just made changes to the formula, but also some pretty big additions. One of the most significant of these additions is the inclusion of quantum masks, area-specific power-ups that each affect gameplay differently. The first mask, Lani-Loli, lets Crash phase items in and out of existence. Early obstacles may have you phase out a wall, jump through it, and then phase back to land on a platform. Another mask, Akano, lets players activate an infinite spin that allows for massive jumps, giving the level designers the chance to build levels that require you to hover over large distances. Every quantum mask presents an easy-to-understand concept that becomes more difficult throughout the game, and while none of them are new to the world of video games, they all fit the Crash Bandicoot formula perfectly.

The other major addition Toys For Bob has made to Crash Bandicoot in Crash Bandicoot 4: It’s About Time is a number of new playable characters. Although most of the levels focus on Crash or Coco, they are now joined by three major players from Crash’s past; each of their levels intersects with the main storyline as well, showing us exactly how they’ve helped (or hindered) Crash and Coco on the main journey. Tawna, who was once some damsel in distress, is now an action hero from an alternate dimension. Being the badass she is, Tawna gets a Hookshot and the ability to wall jump, but overall, she’s pretty similar to Crash. Dingodile and Cortex, on the other hand, are entirely different. 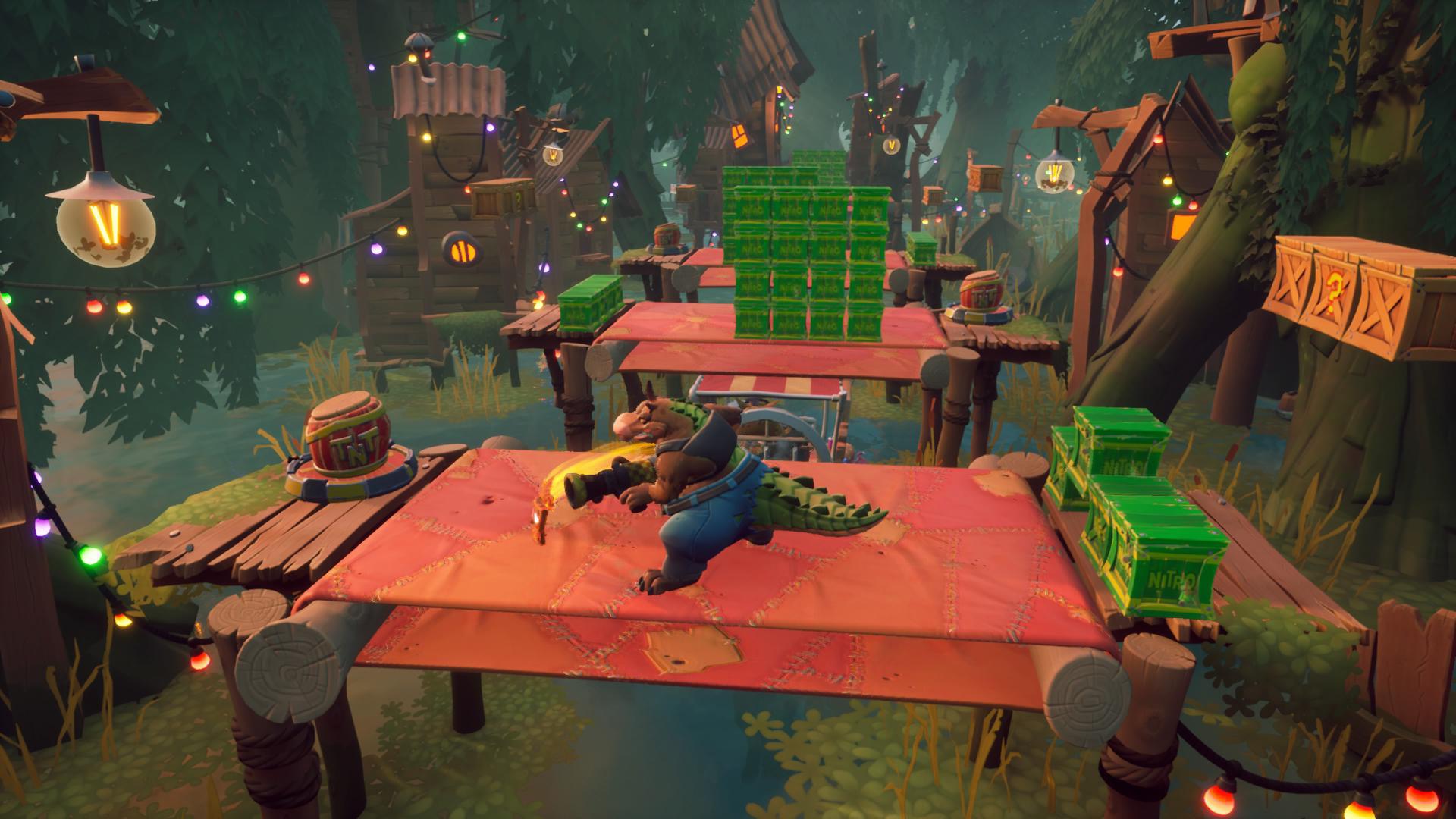 The Dingo/Crocodile hybrid is sluggish. He’s by far the slowest of the group and only gets a single jump. It’s a horrible way to play a platformer until you add his trusty vacuum. With the power to suck up and fire TNT, Dingodile can attack at range. Not only that, his second jump has been replaced with the ability to hover for a short time. This leads to levels that are different from the main game, while still carrying that Crash Bandicoot quality.

It’s the same for Cortex’s levels. The original game’s main villain, Neo Cortex runs around with a ray gun that turns enemies into either normal or bouncy platforms. Add a dash in place of his double jump, and Cortex’s levels become a fun mix of puzzling and platforming in which you essentially build the level yourself, making sure not to overshoot your dash. The only thing I’d like to see added to his (and Dingodile’s) gameplay is a reticle when shooting, but the game’s aim-assist usually does the job.

While the three new playable characters are fun and do a good job breaking up the game, it’s a shame so many of their sections are cut short. Halfway through many of their levels, the game shifts back to Crash, where you play through older areas with remixed enemies and obstacles. While the changes to these portions are substantial, this means players will play the same section four times to beat every normal and inverted stage. With the game already filled to the brim with the Bandicoot, I think Dingodile could have had more time to shine.

Backtracking for a second, Crash Bandicoot 4: It’s About Time does have “N.Verted” options for every level, but it’s not just a quick horizontal flip. Each of the game’s worlds has a distinct filter for mirrored stages. Some levels are only changed visually, like where Crash can twirl to spurt out paint, adding colour to a black-and-white world. Others give old stages new physics, completely changing the way you’ll play the game. Overall, the filters are a mixed bag: at their best, you’re twirling through some seriously beautiful stages, almost unrecognisable to the original levels; but at their worst, they make the game less fun. The new visuals can make the game difficult to see and the physics feel bad, two massive issues to have in such an unforgiving platformer. I appreciate the effort put into making these levels different, but different doesn’t always mean better. 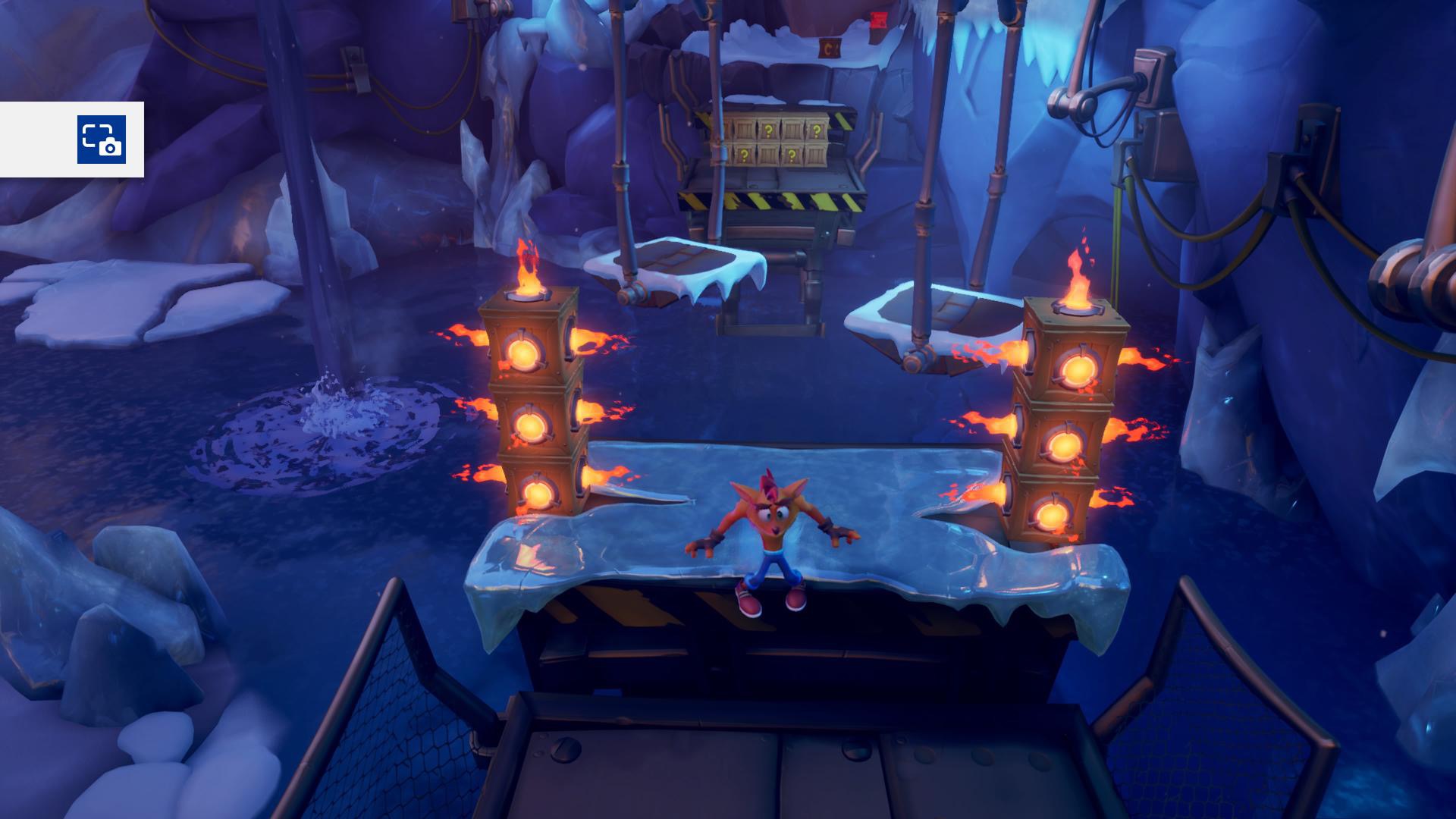 While the game does a good job updating and adding to the original trilogy’s style, it isn’t always perfect. The new fire boxes, for example, are dumb. These crates shoot flames every few seconds, meaning players need to stop and wait for the right time to break them open. With more thoughtful placement, these would present an interesting platforming challenge, but most flaming boxes are just stacked along hallways. All it does is stop your momentum and waste your time. Not fun.

Not all of the issues are new, either. The outdated design does occasionally pop up in what is an otherwise magnificent modernisation. The fixed camera stays true to the old games’ design, but some sections where Crash walks towards the screen force players to take leaps of faith. With little indication of what’s going on behind you, this will lead to a few deaths. Chase scenes, unlike the original trilogy, do not have this issue. You still run towards the screen, but the game uses obstacles designed to slow you down rather than kill you. It also pulls the camera back, giving players more time to react. It’s a shame the camera trick isn’t always used where it’s needed, although it does only make up a small segment of the game.

Finally, I hate how Crash Bandicoot 4: It’s About Time hides its boxes. The game will sometimes put crates in places that are impossible to see, with no visual indication, meaning that it’s impossible to 100% certain areas without either looking up where those last pesky crates are… or spinning along every inch. It’s an even stranger oversight when you consider there are some well-hidden crates the observant player will spot. These better boxes hide in buildings with an open door spewing light, or a single crack showing a sneaky part of a question mark. These secrets work, but those without cues are cheap and are a bad inclusion for a collect-a-thon.

Despite the issues, though, Crash Bandicoot 4: It’s About Time is a great game. For every problem I have, there are a million other things to love: great visuals, a fun story, old-school gameplay, new characters and mechanics, numerous quality of life improvements and plenty of levels ready to be played back-to-back (and back-to-front). After 22 years of waiting, all I can say is it’s about time.

With the same old-school gameplay and plenty of welcome additions, Crash Bandicoot 4: It’s About Time is a worthy sequel to the original trilogy.