I was instantly hooked when Carrion’s first trailer came out; the dark, Cthulhu-esque design, keen sense of style and clever inversion of standard horror video game construction were all immediately gripping. Now that it’s finally available for all to enjoy, I’m pleased to say that Carrion lives up to all of the promises it — and its developer, Phobia Game Studio — made in that first trailer. It’s time to become the monster.

The titular beast is a writhing, pulsing mass of mouths and tentacles, waiting to devour any flesh that it can cross paths with. At first glance, it seems like a tough task to control: it has no clear front or back and no visible method of mobility. Carrion solves the problem for you though, with thin red extremities extending from the beast’s form and allowing you to move in any direction. Even moving directly upwards isn’t an issue for the monster, which gives you a number of powerful, reactive options. Even as you gather biomass and grow larger, you can change directions very quickly and easily — with no limbs or defined structure to the beast’s nightmarish form, the game is free to allow for strange and impossible movements. It all adds up to feel incredibly fast and fluid, which is great, although it can err on the skittish side very occasionally if you stop paying attention.

You may also find yourself feeling a little less in control when you’re in combat, too, but just like the traversal mechanics, the monster’s unique make-up allowed Phobia Game Studio to make some great allowances in order to make combat work. You’ll do most of your fighting by firing a tentacle out to grab enemies and tearing them apart — forgiving hit detection and what feels like aim assist will make sure you’ll typically grasp your target just by aiming in generally the right direction. That trend continues as you progress through the game and gain extra combat abilities; you rarely need to focus on accuracy in order to accomplish maximum disembowelment. All the allowances are there to make this the most fluid and intuitive experience possible and it’s great to play around with. 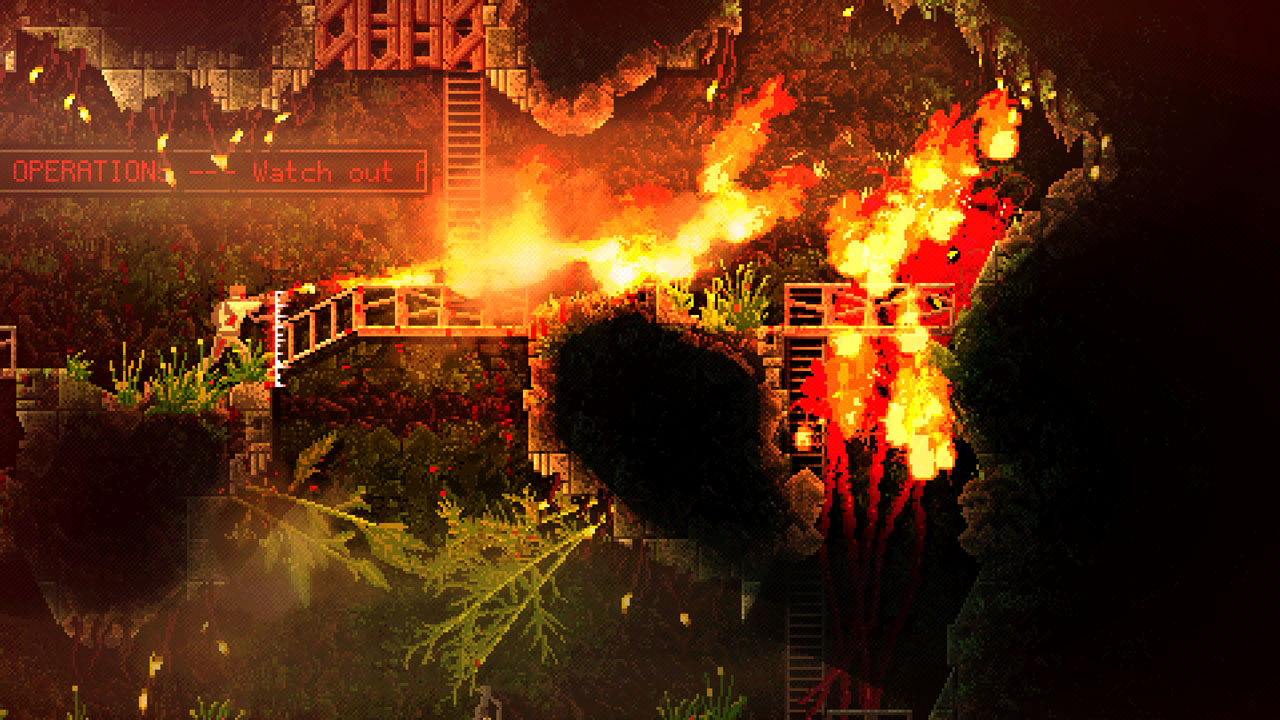 Once you get the hang of controlling the carrion beast, it’s time to escape the caves you’re trapped in. The tasty, tasty humans have built secure facilities surrounding you and you’ll need to murder, solve environmental puzzles and reach key points in which to spread your biomass. Filling these key points with teeth, blood and tentacles will serve to both break the protective barriers stopping you from advancing further out of the caves, and act as your save points. As you play, you’ll find containment tanks with additional powers, but at many points you’ll be required to deposit some of your flesh in errant pools — growing massive comes with the benefit of more strength and new abilities, but you’ll occasionally need to downsize in order to solve a puzzle and that can put you in danger against soldiers with flamethrowers or mechs with machine guns.

This is all well paced, exciting and chaotic — but more importantly cinematic. It gives the feeling of the rush and the power I’d imagine you’d get from cheering on the Xenomorph in Aliens or The Thing from The Thing as you pick off hapless soldiers on a bathroom break or snap a cowering computer scientist clean in half. Even when you’re small, you’re absolutely lethal. It’s gory, and facing the carrion beast would be terrifying, but the inversion is an absolute blast. At times, it even calls to mind the mid-’80s arcade game Rampage: your goal is as much to become the villain and embody this pure destructive force as it is to solve the puzzles and clear the levels. The only real detractor is when the game takes that away from you; some parts have you explore the origin of the beast by playing as a human and running awkwardly up and down numerous ladders. These sections are brief, thankfully, but not brief enough to escape being fairly boring. Controlling people by sending a tendril over to take over their brain is much more satisfying. 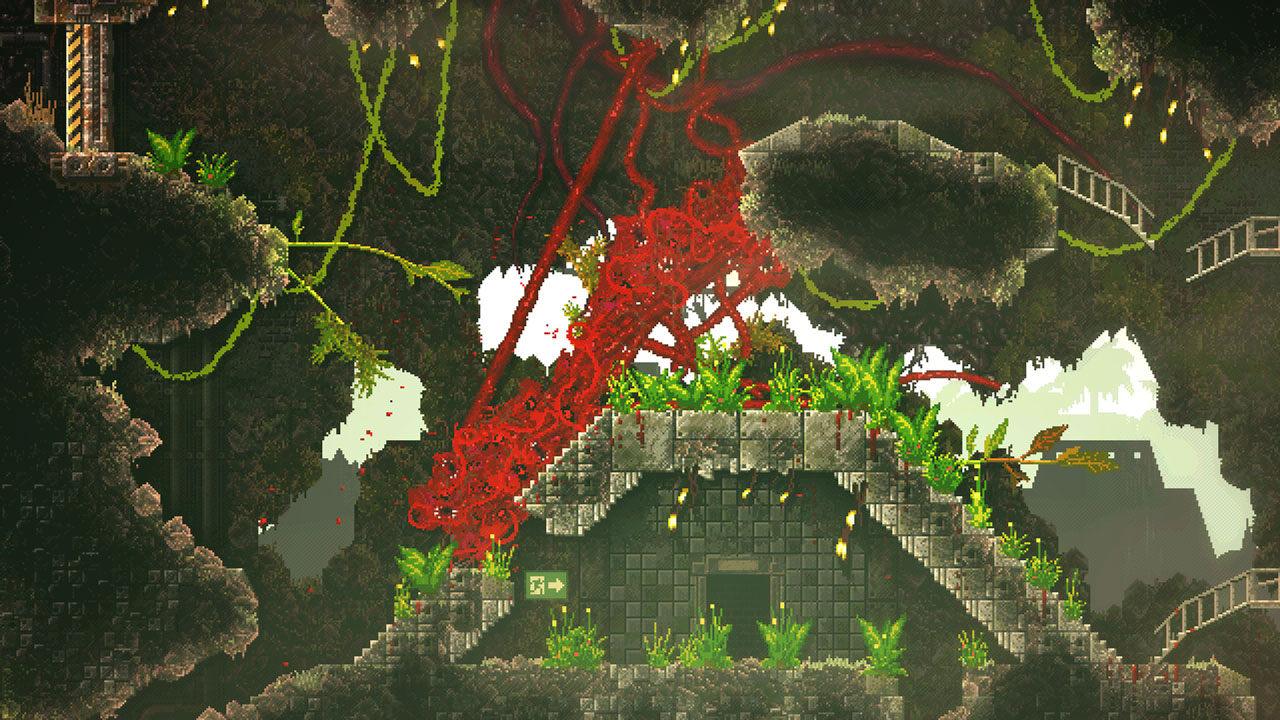 There are so many other great parts to Carrion. Late in the piece I unlocked an ability to send flesh spikes out of every crevice in my body and gruesomely impale anything and everything in my way and just felt… incredible. The abilities, the movement and the level design are all so damn clever. It’s apparent even with the very first thing I talked about: firing tendrils out to move in any direction isn’t just useful to the gameplay but remains so consistent with — and even enhances — the dark, gruesome horror aesthetic. Everything about Carrion just feels right, and I relished the moments of all-out, unfiltered, cathartic destruction like a lovely cup of warm tea… with blood instead of milk.

Carrion is the opposite of its titular character: slickly presented, polished to a shine and great fun to hang out with. The flashes of tedium and repetition are there, but some decent pacing and consistent progression – along with just how satisfying the carrion beast is to fling around a room – really drown out the minor complaints. It’s definitely worth a spin for a gory good time.

Ben reviewed Carrion on PC using a Steam key provided by the developer.

[…] was comedy/body-horror/platformer Struggling, which kind of looks like a cross between QWOP and Carrion. The game will have players attempt to get a strange, difficult-to-control squishy mean man through […]