The inaugural season of the FIA Gran Turismo Championship has come to an end, with Brazil’s Igor “IOF_RACING17” Fraga clinching the FIA GT Nations Cup after a stunning drive in the double-points race, which saw him take the win after starting in 10th on the grid.

Fraga finished on 54 points after the concluding 9-lap race on Circuit de la Sarthe, and the emotions were aplenty. The Brazilian proudly pumped his fists over and over as he crossed the finish line, before leaping up on his seat and revelling in his triumph.

A drive from tenth to first, like only a champion could do! ? 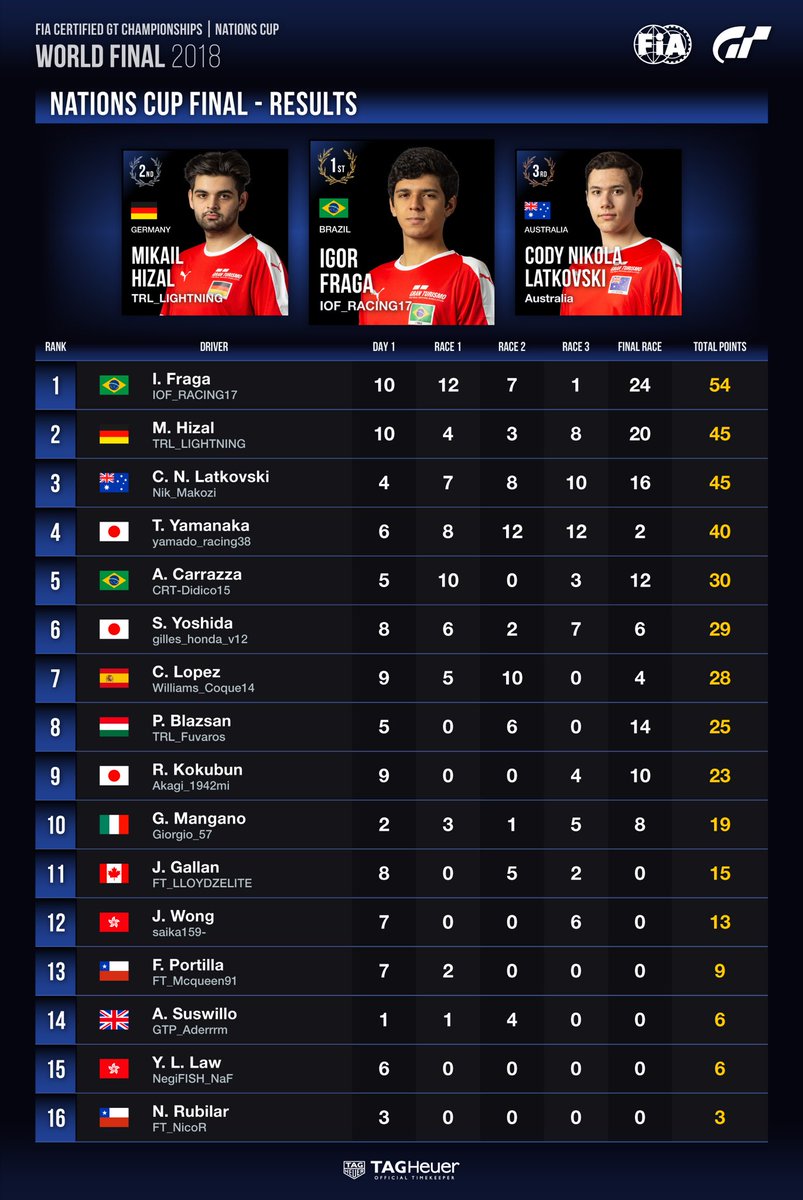 Fraga started the day’s proceedings on 10 points, earned from topping Group A in Friday’s semi-finals, and continued his perfect start with a win on the Tokyo Expressway.

Japan’s Tomoaki “yamado_racing38tt” Yamanaka then won on Fraga’s home circuit of Interlagos, following a tense final lap in which both drivers made contact. Yamanaka backed up his performance with a second win at Monza, and moved eight points clear of Fraga as he slumped to 10th.

Fraga showed his skill on the famous Le Mans circuit, though, moving up to third by lap 5 and taking the lead from Hizal on lap 8.

Yamanaka would finish the series in fourth after crossing the finish line in 10th place.

Lexus took out the Manufacturer Series final on Saturday, with the team of Tyrell Meadows, Vincent Rigaud and Kanata Kawakami making use of an excellent pit strategy to overcome Toyota and Aston Martin.

Under manufacturer series restrictions, each driver had to complete a minimum of two laps of the 7-lap race around the full Nürburgring layout, a 25-kilometre circuit designed to test every racer’s mettle.

BMW’s Nicolás “FT_NicoR” Rubilar landed on pole with an impressive time of 8:00.067. The team made the decision to start on the medium compound tyre, and a controversial accident on the first lap sent its car down into last place, ultimately finishing in 11th.

Both Fraga and Hizal also competed for Nissan in the Manufacturer Series, and looked to secure an impressive comeback into third place, but ran out of fuel and fell to 10th. Yamanaka competed for Toyota in the event.

Despite faltering in the Manufacturer Series, Fraga will forever be known as the first driver ever to win the FIA Gran Turismo Nations Cup. Congratulations to Igor and the rest of the drivers for an incredibly entertaining weekend of racing.