Blasphemous: The Stir of Dawn Review — The Holy Return

The Game Kitchen’s indie Souls-like, Blasphemous, beckons players back to the gothic, side-scrolling madness of Cvstodia with a massive free update, The Stir of Dawn, which not only brings a number of quality-of-life changes but also serves as a significant expansion that opens new areas to traverse as you explore a brand-new storyline.

Blasphemous was initially released on September 10 last year after yet another explosive Kickstarter campaign, which saw The Game Kitchen securing its initial target of $50,000 in just 24 hours and going on to secure over $200,000, enabling release on all major consoles. Blasphemous’ Kickstarter success can be attributed to The Game Kitchen’s pedigree, with the Seville, Spain-based developer previously creating the award-winning point-and-click adventure The Last Door — one of the finest horror games I’ve ever played. 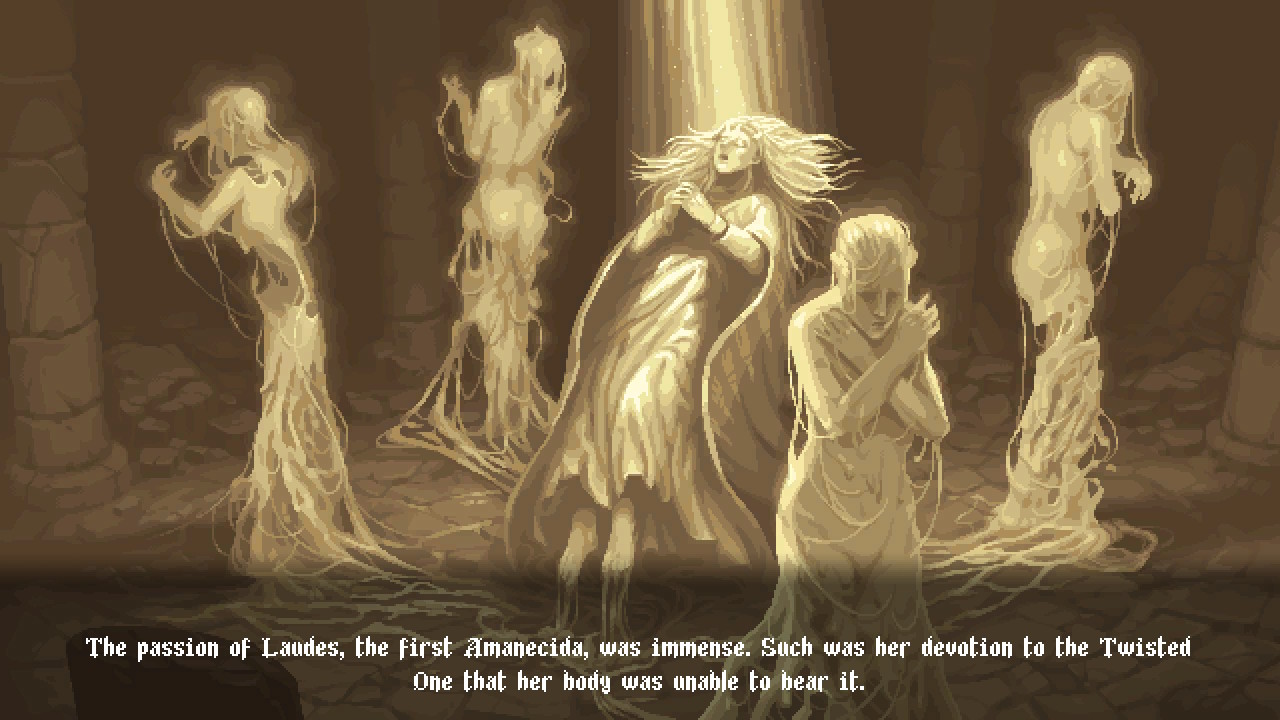 Twisted religious story-telling at its finest.

The base game offers around 20 hours of non-linear gameplay that sends The Penitent One on a disturbing journey across Cvstodia. The core gameplay is a smooth mix of hacking and slashing through medieval landscapes heavily inspired from nightmarish representations of holy crusades and traversal puzzles that open up the world as you gain abilities, and the Metroidvania experience hides ample secrets and rewards tucked into every corner of a game world that’s coloured with horrific bosses and traumatic NPCs.

Released earlier this week, Blasphemous: The Stir of Dawn’s new content overlaps with the base game’s narrative, adding hours of new gameplay spread out across your entire playthrough. The catch, however, is that the majority of the new content and mechanics are available exclusively in the New Game+ mode. Known as “True Torment Mode”, Blasphemous’ New Game+ mode activates your typical enemy upgrades — increased hit points and damage (they hit like trucks!), faster recovery and smarter AI — and balances that out by carrying over any sword, prayer and ability unlocks you found in your original playthrough. The only things that don’t carry over are health and fervour (magic) upgrades that you’ve found; The Game Kitchen sees those as an integral part of each playthrough, so you’ll have to find them all over again.

You can only access the Stir of Dawn storyline and the sidequests it brings in the True Torment Mode, by finding the new NPC Jibrael and receiving his quest to defeat the swathe of new bosses known as the Amanecidas. You can find Jibrael and get the Stir of Dawn quest line moving pretty early in the playthrough, but the Amanecidas are spread throughout the map, so you’re looking at at least one complete playthrough in order to see and play through all of the new content. 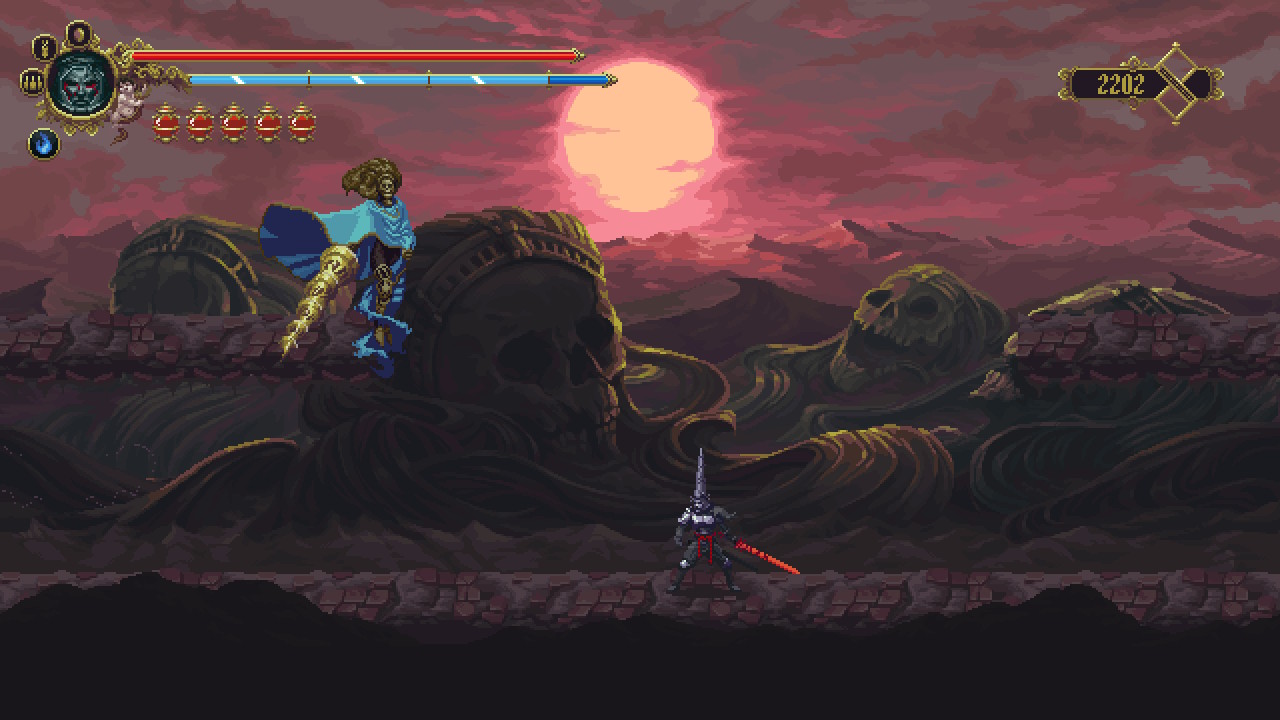 Take down the Amanecidas one by one.

The other major addition that comes to Blasphemous in The Stir of Dawn comes in the form of the Penitence system, which gives you three distinct paths to choose from: the Penitence of Unwavering Faith regenerates your Fervour infinitely while also weakening your mêlée attacks (I chose this one for my review playthrough and found a completely new mage-like experience compared to my first playthrough); the Penitence of the Bleeding Heart replaces your health bar with an orb system that regenerates gradually, at the cost of enemies respawning a lot more frequently; and the Penitence of True Guilt essentially removes health vials from the game and brings your Guilt meter to the maximum (which is like turning hollow in Dark Souls) when you do inevitably fall in combat.

Completing a playthrough with a Penitence equipped rewards you with an exclusive cosmetic reward and a new passive power in the form of a rosary bead; there is currently an issue with the game that’s causing the rosary reward to stay locked, but The Game Kitchen has already stated that it’s working on a hotfix for that issue that will retroactively award the rosary to anyone who has already completed a “Penitence run.” 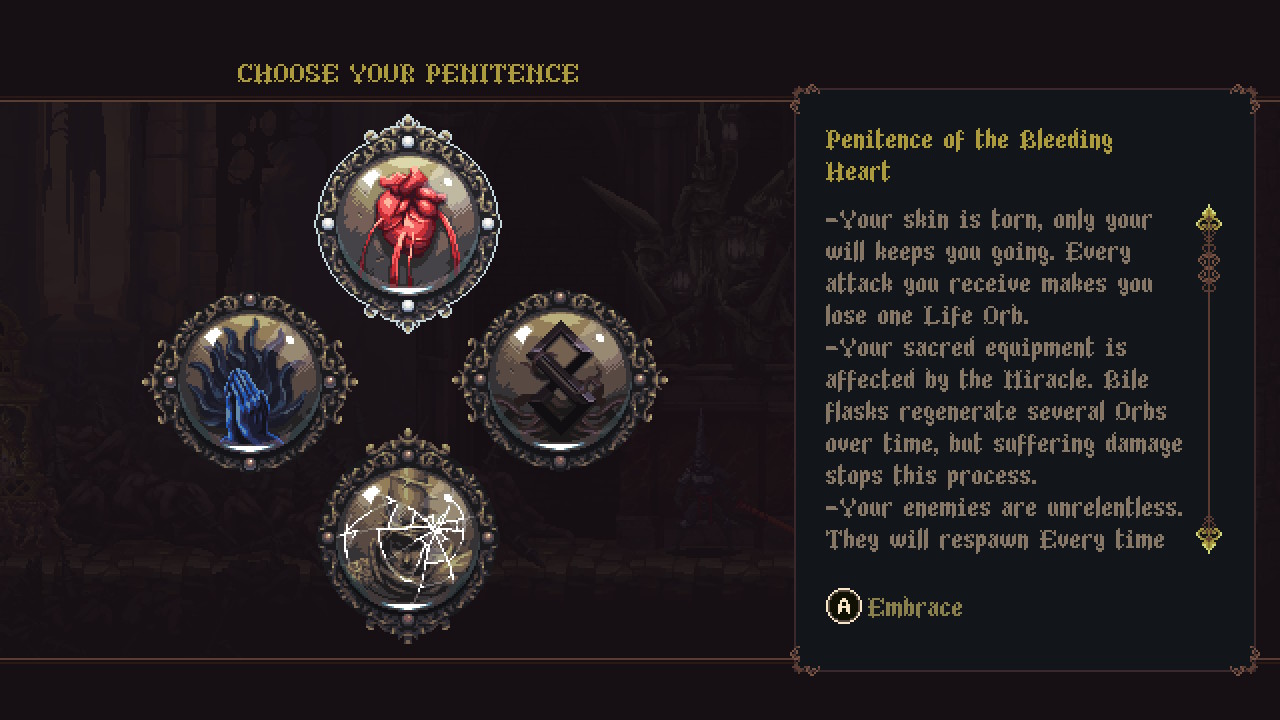 The Penitence system opens the way for dynamic replays.

The Amanecidas themselves are incredibly dynamic — especially compared to the bosses found in the base game — and they combine with the Penitence system to really make you work for those rewards. Each Amanecida has a mostly unique attack pattern, with some commonalities between them so that you can develop a general strategy (especially if you’re running with the Penitence of True Guilt), and the final battle is a fantastic payoff for all your hard work. Alongside all of these delightfully grotesque new encounters, The Game Kitchen has reworked the game’s older enemies to enhance “fairness”, also tweaking the player’s hitbox to suit. Your more powerful attacks now leave your foes stunned, allowing you to get in close for easier executions, which creates a much more engaging high-risk, high-reward gameplay sequence.

The increased difficulty frequently forced me to hot-switch my passive abilities and spells mid-battle, which I never needed to worry about in my initial playthrough. Although it’s great that the new battles push players to be a little more creative and put in a little more effort in order to reap the rewards, it unfortunately highlighted just how clunky Blasphemous’ menu system — one of the very few things The Game Kitchen didn’t rework in this new version — is, both in terms of speed and functionality.

Aside from that, though, the colossal expansion also features updated voice acting, offering a complete Spanish option, and a rework of some character, enemy and level art (see below for an example of the latter). The Game Kitchen has also updated the map, adding markers to help you with backtracking, and added a number of gloriously welcome new fast-travel points on top of the original game’s selection. I don’t want to spoil any of Blasphemous’ new mysteries for, but I very, very strongly recommend that you invest in Albero as soon as you can.

Just a taste of the visual upgrades.

The new content in The Stir of Dawn is a perfect excuse to dive back into Blasphemous and the mire of the Grievous Miracle. The quality-of-life changes and the direction The Game Kitchen took with the Amanecida bode extremely well for Blasphemous’ future, reflecting the studio’s commitment to engaging with, and improving, what was already an incredibly solid base — which becomes all the more impressive and encouraging when you consider that the entire expansion is free.

If you’re a glutton for punishment and pride yourself on overcoming the greatest challenges gaming has to offer, Blasphemous: The Stir of Dawn has you covered. Bringing out the best in an already devilish Souls-like, the expansion eases the pain of your constant deaths by making the world more accessible than ever.