Even 2020 can’t stop November’s annual releases, and Ubisoft has dropped the second of three games for the next generation of consoles: Assassin’s Creed Valhalla.

Valhalla is a big, big game. Ubisoft made a point in the lead up to release that Valhalla would be a more condensed and focused experience than Odyssey, and that was a lie. I was one of the few who didn’t have a problem with Odyssey’s length, but I do with Valhalla, and the reason why is simple. Last year’s instalment wasn’t called Odyssey just because of its setting — the name was clearly an allusion to the narrative’s pacing and structure. Alexios and Kassandras story wasn’t a linear plot with a clear beginning, middle or end. Instead, you were on an adventure, getting caught up in some rather great side stories that were the main story in retrospect. Odyssey did have a story of course, but it was drip-fed across the 50+ hours required to reach the ending. Valhalla is the polar opposite; it’s laser focused on its story, to the point of almost entirely removing the side-quests features in Odyssey despite being quite a bit longer. I can’t help but feel that someone at Ubisoft needed to stop everyone and say “enough is enough”.

It’s this focus that hurts the overall game. Assassin’s Creed Valhalla replaces the traditional side-quests with small, non-diegetic mini-stories called World Events. These World Events are an interesting alternative that I can definitely see appearing in other RPGs and/or Assassin’s Creed titles to support a smaller selection of side-quests, but the lack of side-quests on offer here creates a void between major story beats that World Events simply cannot fill. This issue is exacerbated by the narrative itself, which really starts to drag its legs after the 20-hour mark. Repetition quickly sets in around this point, with entire “quest arcs” feeling superfluous in the grand scheme of the overall plot, and a large bulk of the game boils down to meeting and greeting your neighbours so you can bang down raven pieces on the alliance map. Where Odyssey’s main plot was a fetch-quest designed to get you to different areas and engage in fleshed-out chains of side quests, Valhalla is paced like a fetch-quest simply because. That’s a shame, too, because both the story and world here are fantastic. Living up to its name just as its predecessor did, Assassin’s Creed Valhalla is a true viking epic: its world as a whole is gorgeous and dotted with interesting locales just like Odyssey’s; its tone is much more grounded, visceral and ultimately personal; and the introduction of Norse mythology creates an ominous feeling that pervades the entire experience, much like Ragnarök is an inevitability within the Nordic legends themselves.

The presentation is just as nice, as well. Assassin’s Creed Valhalla is undeniably gorgeous from a technical standpoint, but the real star of the show is its art direction — every area has a personality, whether it’s the gloomy yet inviting landscapes of England or the cold harshness of Norway, it all complements the brutality of life during that era. Ubisoft also took some more liberties with the mythological aspects of the world and story: whereas Origins and Odyssey both used the series’ sci-fi trappings to ground some of their more out-there moments, Valhalla is far more subtle, choosing to present the Norse elements in a slightly more supernatural light than we’ve seen from the Assassin’s Creed series.

Going back to the technical side of things, though, the game runs quite well, especially on the Xbox Series X where it runs at a dynamic 4k and near-constant 60 frames per second. It is, unfortunately, one of the games that currently causes the console to shut down when crashing; it’s nowhere near as common as it has been with Call of Duty: Black Ops Cold War, but buyer be warned. The PC port is quite good as well, definitely a step up compared to Watch Dogs: Legion but still not as stable as its next-gen console counterparts, trading the infrequent crashes for random but intense frame drops that I experienced no matter how I configured my settings. Much like Watch Dogs: Legion, Assassin’s Creed Valhalla is not optimised for low-end computers, and it’s not very well optimised for mid-tier machines either, but it’s much more scalable than Legion so not all hope is lost. 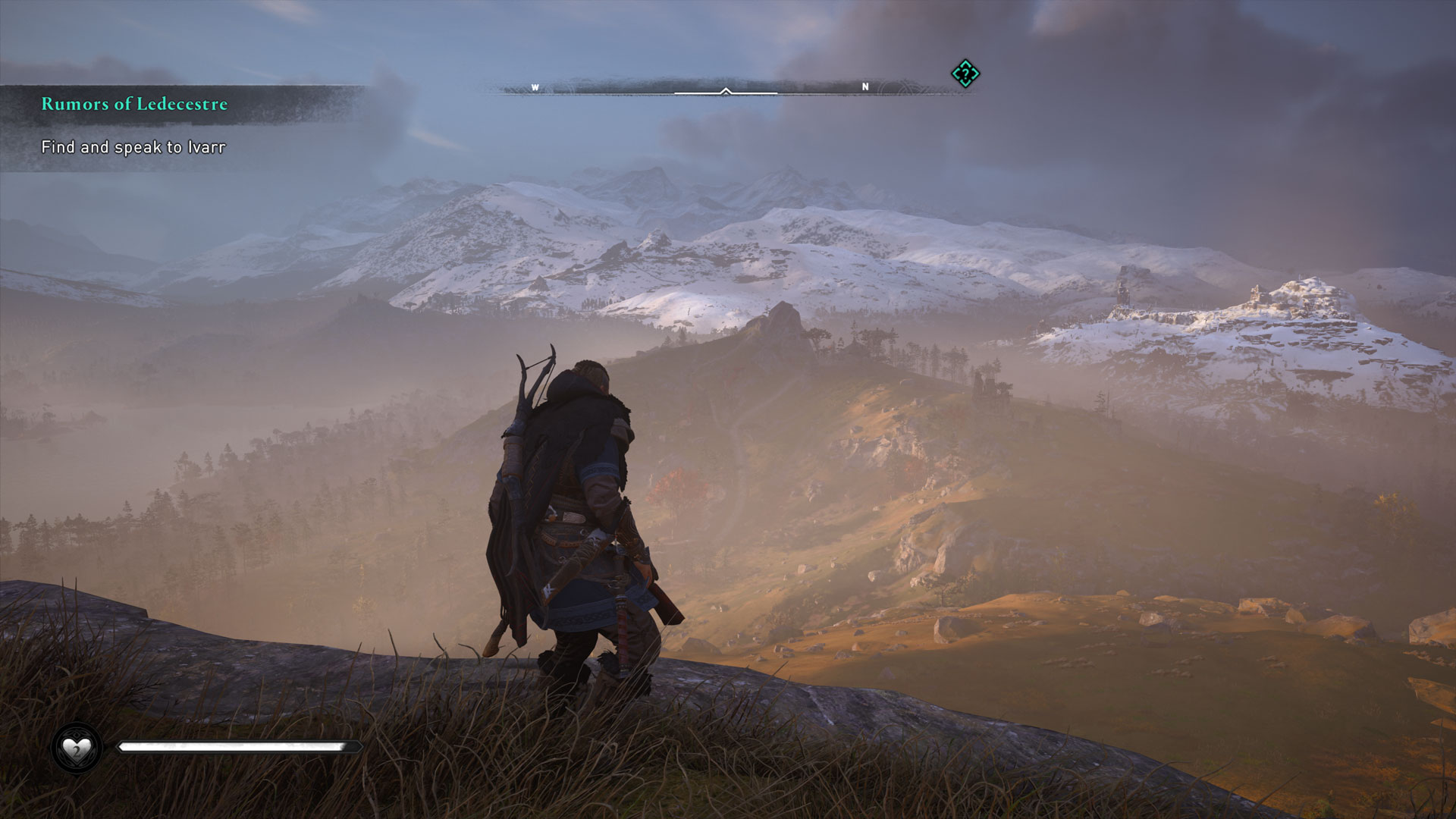 Graphics and presentation are one thing, but gameplay is another and Assassin’s Creed Valhalla delivers a fine gameplay experience. It’s clear that Ubisoft decided to use Valhalla, and the series’ debut in the new generation, to refine rather than expand: Valhalla doesn’t make any of the radical departures from the standard formula that Origins did, nor does it expand too heavily on it like Odyssey did. There have been some additions, though, namely to the stealth gameplay, where Ubisoft has made an attempt to re-incorporate the “social stealth” idea that was so central to the earlier games. Blending makes its return, along with the iconic hood (kind of) and the hidden blade (for which you can turn on guaranteed assassinations if you just want to churn through the story). These are all welcome additions to an Assassin’s Creed game, but they do feel at odds with the game’s focus on more direct combat.

Given that we’re now playing as a viking, we’ve also got a new raiding mechanic wherein players can use their longships to land and storm Monasteries, as well as enemy encampments and settlements. It’s a neat feature, but it also does invalidate the stealth mechanics: for the most part, raiding is quite simply quicker and easier than sneaking around and avoiding detection, and it’s also a fair bit more rewarding — you’ll find yourself doing a whole lot of raiding in order to gather the resources you need to upgrade your gear and settlement.

In response to the overwhelming amount of gear on offer in Assassin’s Creed Odyssey, Valhalla offers a more limited quantity of items that you can upgrade over the course of the game. It’s much easier to manage, for sure, but when you consider the game’s length and the changes Ubisoft’s made to character progression, it can be a little strange to feel just how slowly you actually get stronger. With that being said, it’s your settlement that’s the real money-sink; it takes a whole lot of time — and even more resources — to build up, but it does open new quests, customisation options and mechanics along with the visual updates. Notably, players can customise their own Jomsviking to be part of their crew and recruited by other players, like a simplified version of Dragon’s Dogma’s Pawns. The settlement serves as a nice intermission between the quests, and it’s good to see yet another mechanic make its return to the series. 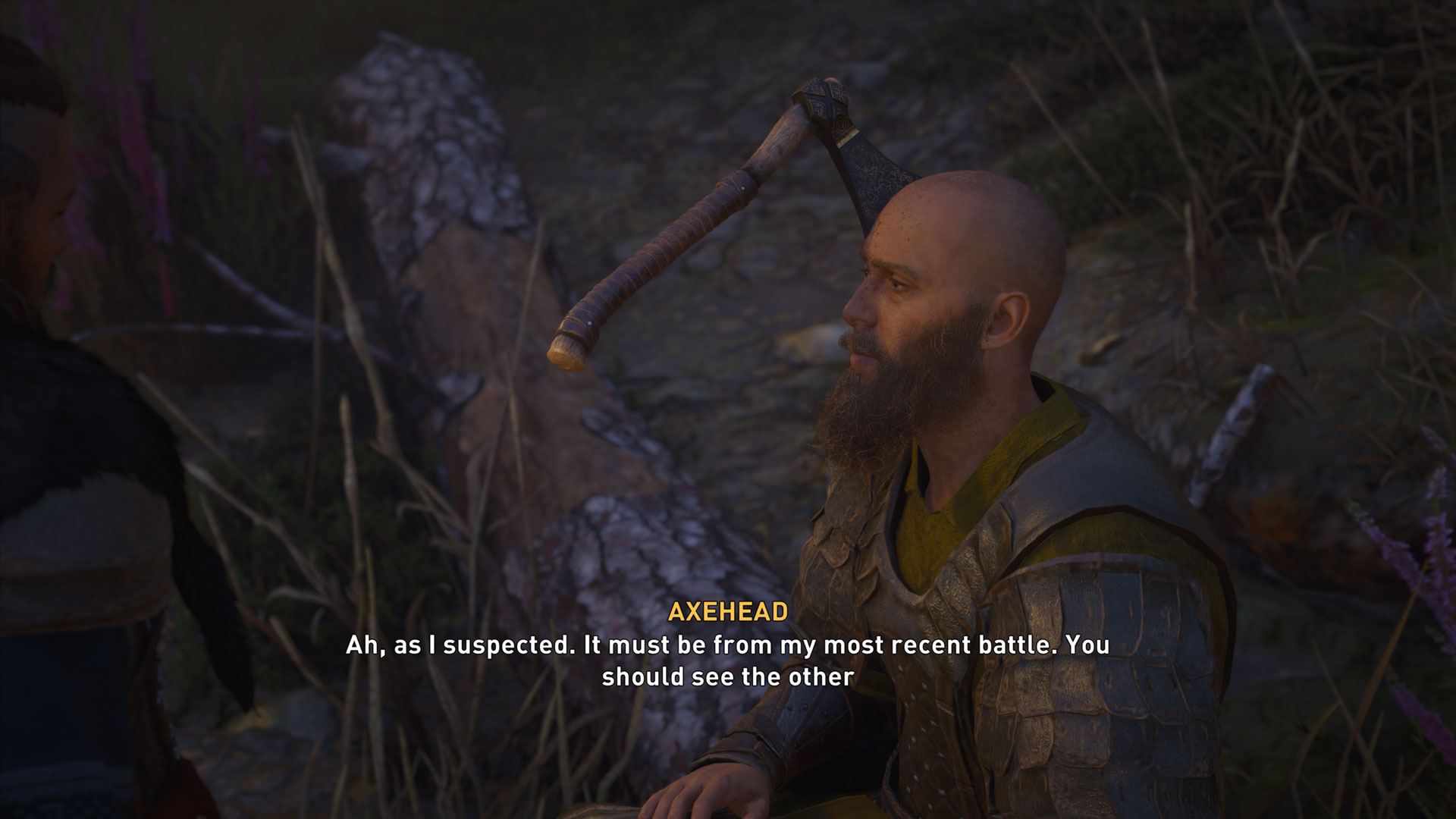 One thing that Ubisoft took great care to revamp is the level progression, and how it ties into exploration. Assassin’s Creed Valhalla has you learning skills by finding them throughout the world instead of through level progression, and level progression now sees you navigate three skill trees, known as Constellations: Stealth, Combat and Ranged. The bulk of the Constellations are made up of stat increases like critical chance, armour or damage; there are a few skills to be learned through Constellation progress, but these are more like extensions to your existing toolkit than new abilities altogether.

You won’t notice too much of a difference, though. You’ll almost certainly be over-levelled throughout the mid-game, and you’ll find yourself unchallenged outside of a select few moments; I rarely used the combat abilities unless I was up against a boss or a shieldbearer, for instance. The lack of difficulty could very well be a blessing, however, given that the combat still feels rather floaty, like Eivor strapped on some rollerblades. Dual-wielding feels especially awkward and the parrying mechanic feels… off. I did eventually get the timing down and get the hang of it as a whole, but it still just doesn’t feel natural or right. It’s strange given that neither of those issues existed in Assassin’s Creed Odyssey, so it feels like a bit of a step back. 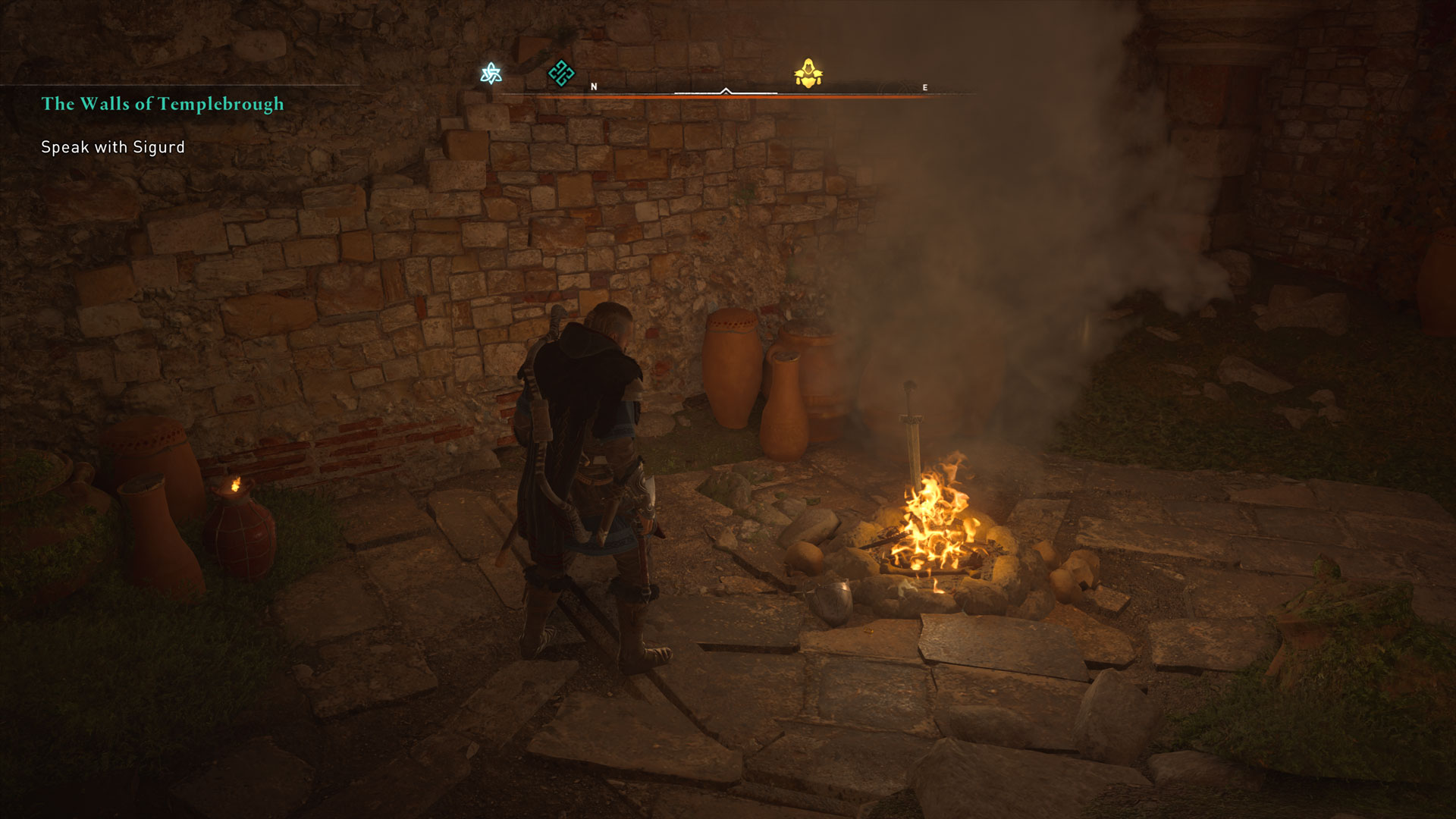 It’s great to note that Assassin’s Creed Valhalla’s exploration is a lot more engaging than it has been in some time. When starting a new game, Valhalla offers a third option called “Pathfinder”, which is an extension of the “Explorer” option that removes the icons from the map until you get close enough to trigger a coloured marker that matches the type of location… and it’s absolutely the best way to play the game. The Pathfinder option helps the game feel a whole lot less overwhelming, as it doesn’t bombard you with side-quests, activities and collectibles as soon as you open the map, and it encouraged you to deviate from the more structured main quest — a mystery on the horizon is actually a mystery, after all.

The Pathfinder mode is an elegant solution to Assassin’s Creed Odyssey’s issue with main quests. In Odyssey, you would occasionally receive directions to an objective but have to find your way there without a marker, which devolved into heading in a vague direction and then calling an eagle to trigger a marker when prompted; Valhalla still prompts you to use your raven when you’re getting close to your objective, but the raven reveals a highlighted area for you to search rather than just telling you exactly where the objective is. Although it still hasn’t gone far enough with this, I’m still happy to see that Ubisoft was willing to remove the training wheels to some extent — especially because it’s encouraged some better world design now that every location needs some distinguishing feature(s) to identify it by. 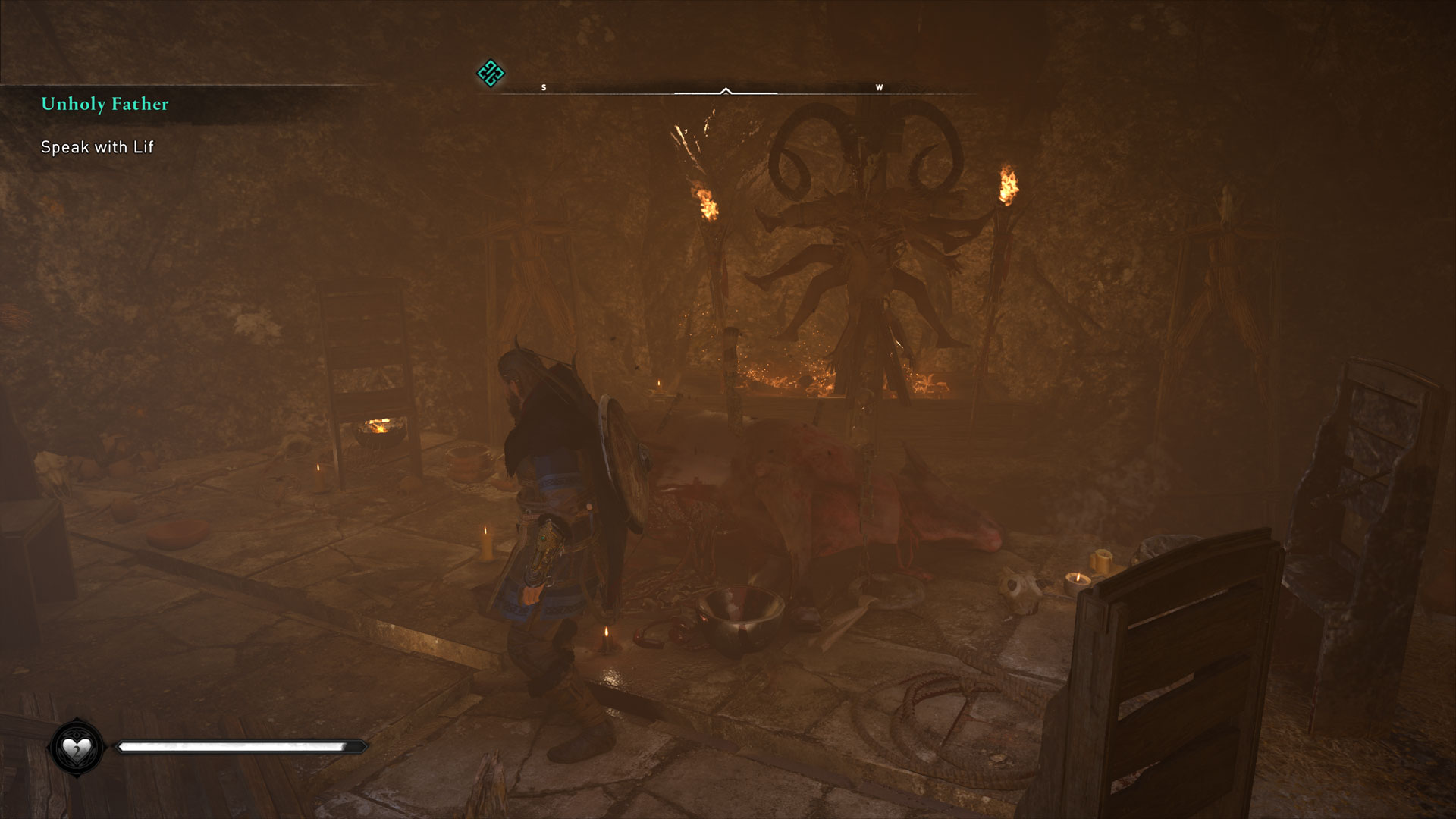 All in all, there’s a lot to love in Assassin’s Creed Valhalla: it’s gorgeous, it’s got a great story, and rampaging through the world as a viking serves as a reminder that Assassin’s Creed is one of the few options we have to really explore and relive these interesting historical periods. Unfortunately, though, I can’t help but feel that the series fatigue setting in one again, and that lies solely at the feet of this game’s gargantuan length. There’s a lot to enjoy here, but the effort you need to expend in order to see it all is absurd… and you’ll have to do a vast majority of it if you want to see the ending.

Assassin’s Creed Valhalla is a game bursting with content, and for that it’s well worth the price of admission. It’s also a game that you’ll likely take time away from before finally reaching the ending.