As disappointing as it is, Nintendo’s relative dearth of first-party games in 2020 is no surprise. Sure, we’ve had the likes of Animal Crossing: New Horizons, a new addition to the Paper Mario series and Pikmin 3 Deluxe due to arrive at the end of October, but this second half of the year has been very quiet for the top-tier video game company. I’m still holding out hope that there are some big things planned for the Christmas period despite a global pandemic.

Despite the first-party silence, however, Nintendo dropped a new video in its “Indie World” series on August 18, featuring a number of new and upcoming titles on the Nintendo Switch developed by indie teams. While the announcement of a free multiplayer update to Untitled Goose Game was amazing, I was instantly drawn to the apparent charm of A Short Hike, released as a timed-console exclusive following its PC release in July 2019. I’d never heard of this game until the trailer, but there was something about it that I couldn’t quite put my tongue on until playing it.

Developed and published by Canadian designer Adam Robinson-Yu (a.k.a. adamgryu), A Short Hike places you in control of Claire, a (presumably) teenaged anthropomorphic bird. The story is simple enough: while you’re on holiday at the Hawk Peak Provincial Park where your Aunt May is a ranger, you decide to climb a mountain to get phone reception so you can receive an important phone call — because that’s what all birds do, right? As straightforward as that sounds, however, this mountain is no easy feat to climb. Although you are a bird, you are unable to fly, and can only glide through the air with a gradual descent (or, in other words, falling with style).

If you know, you know.

In order to reach the summit of Hawk Peak, you must search high and low for “golden feathers”, which grant you both an extra “hop” through the air and a short burst of climbing time to scale the cliff faces, which get exponentially steeper as the game progresses.

Your main task is just a mere scratch on the surface of A Small Hike. As you make your way around the mountain, you’ll meet a plethora of speaking animals, including a young frog building a sandcastle metropolis, a caravanning mouse who has lost his watch and is paranoid that “internet thieves” will find it, and a marathon-running tortoise. Some of these characters give you extra side-quests, requiring you to perhaps collect shells on the beaches, or buy some golden feathers off a scalper for an exorbitant price, while some will simply grant you a witty quip and let you be on your way.

So much of A Short Hike’s appeal comes from the small ways in which it doesn’t feel like a relatively short indie title. The game does not have a strong sense of linear progression, which greatly works in its favour: you can choose to race up to the top of Hawk Peak as fast as possible, or you can spend your time fishing in the lakes, rivers and beaches, racing bunny rabbits and collecting items for park friends. Although taking your time to complete every side-quest prior to completing the main storyline makes your maneuverability slightly easier, I did not find the game all that difficult on my first playthrough, where I felt like I made an effort to get the top of the mountain reasonably quickly. Without focusing too much on the side missions — I completed some, but didn’t spend time grinding them all out — reaching the top of the mountain took me the better part of an hour on my first run through. If you’re someone who prefers to rush through games without revisiting all of the side-quests and missions, this is going to be a quick game for you by your second and third visits.

It’s also worth noting that A Short Hike tells a rather heartfelt tale through its often exuberant and highly emotive characters. I don’t want to spoil anything for you, but I will say that Claire’s phone call really did tug on my heartstrings… 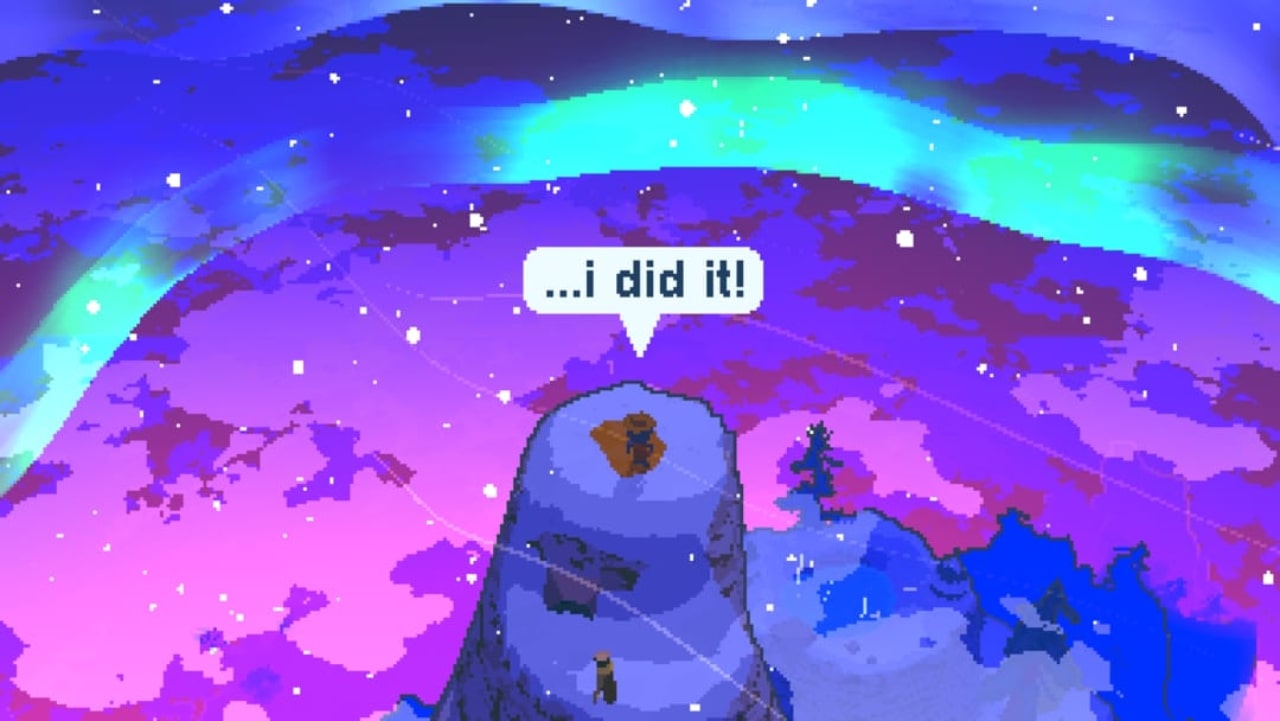 Climbing to top of the mountain and taking the phone call that Claire receives at the end of A Short Hike is almost a tear-jerker.

A Short Hike’s controls on the Nintendo Switch are simple and reasonably intuitive, relying on only the front-facing buttons and sticks on the controller: press A to jump and hold it to glide through the air and climb vertical surfaces; B to use whatever item is active in your hand; X to run (once you’ve unlocked the running shoes); Y, + (plus) or – (minus) to access the menu; either the D-Pad or left thumbstick to move; and moving the right thumbstick to tilt the camera slightly in any directions.

The mildest gripe I have with the controls is that the Y button accesses the menu. Occasionally I find myself accidently hitting it while quickly switching from flying to interacting with an item. If it were up to me, I would have probably swapped both the inputs for the X and Y buttons, and consequently the A and B buttons. I gave this new configuration a go by remapping my buttons (thanks, Switch firmware 10.0) and quickly found it more instinctive — however, your experience may vary.

The somewhat pixelated graphics are simple enough to be considered a “retro throwback” of sorts, but still maintain a very modern feel. They remind me of the original Nintendo DS era of 3D rendering, though it doesn’t feel like it in the way that playing the Nintendo Switch Online NES and SNES emulators feel like their original consoles. It comes down to game performance, with A Short Hike utilising the Switch’s UI perfectly in both handheld and TV mode. The screen does not feel cramped with icons, the field of view gives you enough of an idea of your surroundings without being too far away from the character, and the camera is snappy and responsive when moving around the environment.

The camera isn’t the only snappy aspect of A Short Hike, either: music director Mark Sparling has composed an impeccable series of tracks that naturally transition as you progress to different areas of the map. The music gives an extra sense of depth to Hawk Peak Provincial Park and I definitely recommend putting your headphones in or making sure that you’re isolated with the background music as you play — it’s definitely one of those immersive soundtracks! The music is also available to listen to on Spotify and it’s perfect to listen to while completing some work.

Above all else, however, it was the interactions with each and every NPC in A Short Hike that really did it for me. While they add so much to both the game’s universe and playtime, and each animal has their own unique and exaggerated personality, I surprisingly found the formatting of dialogue exceedingly charming and quirky. It’s such a small detail, but every line of text is perfectly timed to give just the right amount of pacing. The lack of punctuation – commas, full stops, question marks or exclamation marks – or capitalisation for anything other than yelling, gave the game a sense of charm that reminded me most of Sugar Plumps’ letters in the game Little Inferno. Every line of conversation is a burst that, whether humourous or not, keeps you hanging on with bated breath.

The disregard for conventional grammar rules only adds to A Short Hike’s charm.

Finally, I would be remiss not to mention the number one addictive time-killer in this game: beachstickball, an absolutely fantastic volleyball adaptation you can stumble upon by simply roaming around the edge of the mountain’s base. I have nothing more to say about beachstickball because there’s nothing else that really needs to be said — you’ll see what I mean when you play it!

A Short Hike is one of the most charming indie games I have played on the Nintendo Switch, where it feels right at home. Everything about the game is intuitive to the system, from the retro-esque graphics to the ebullient characters and emotional storyline — this game is perfect for some filler between Animal Crossing and your fifteenth run of Breath of the Wild. Hovering around the AU$10 mark on the eShop, A Short Hike packs great value for its buck when you consider all of the optional missions, races and, of course, beachstickball.

Although A Short Hike is — as the name suggests — a rather short game, its combination of humour and emotion captures the player in a way that many AAA games fail to. If you’ve got a spare $10 and a couple of hours to kill, definitely pick up A Short Hike for the Nintendo Switch!

[…] made his return to the Doublejump team after a long layoff, praising A Short Hike’s “combination of humour and emotion” that “captures the player in a way that many AAA […]