Not the latest, but maybe the greatest?

Welcome to A Little Late, a new regular column where we have an informal discussion about something we’ve been playing or liking that… probably isn’t very timely or relevant. Little indie game from last year? Sure! Certified Classic Game™? Why not?! Nothing is off limits in this series, except for in-depth critique.

Kicking things off with one of those little indie games, I just finished playing Sayonara Wild Hearts, a game from last year that has been on my radar for a little while, and I was absolutely blown away. John covered the game in the last round of his Speed Dating at the Apple Arcade series last month, calling it “a sleek fusion of the endless runner and rhythm genres – though it isn’t particularly good at either.”

Sorry John, but I totally disagree. Being a long-standing Audiosurf veteran, I’ll admit that I wasn’t particularly taken with the low-sensitivity free movement at first, but it started to make a whole lot more sense once I fixed the settings (seriously, crank the sensitivity up for your own good!).You’ll be swiping to move your character into different lanes to collect little hearts, and low sensitivity combined with the game’s floaty, dreamy kind of movement doesn’t help with that.

Now, go ahead and throw that last sentence away, because it only applies to the first handful of levels. Everything in Sayonara Wild Hearts evolves as you jump in different vehicles with unique handling and play styles: one moment, you’ll be drifting, then you’ve got a gun and you’re playing a shoot-’em-up, then you’re in a Undertale-esque 2D battle, then you’re playing something that resembles Rez or Osu!, or you’re doing them all at once… The changes that this game undergoes in its short runtime are nothing short of breathtaking. A basic, underwhelming rhythm-ish game turns into an unforgettable sensory experience. 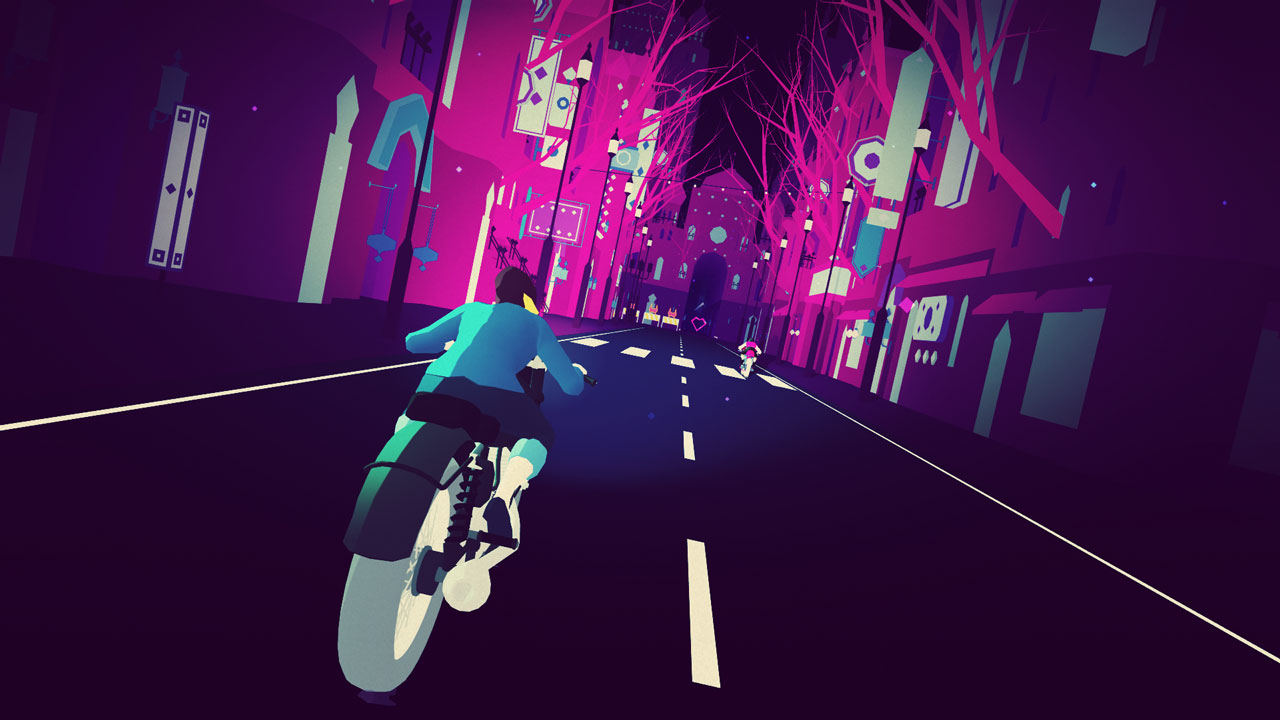 So much of what makes Sayonara Wild Hearts successful, though, lies in its music and visuals. Everything’s intertwined. The driving synth-pop is legitimately incredible — I don’t enjoy most soundtracks in contexts outside their original medium, but I will be putting this soundtrack in my music rotation. It’s the best video game soundtrack I can think of. The neon-soaked, abstract, haunting visuals overwhelm, amaze, make every little action feel important and significant, and keep the energy and verve of  the music flowing.

That all might barely mean anything to you, so let me put it to you this way: in one of the last few levels in the game, I was given a bow and arrow, and time just stopped for me — I was completely, indescribably absorbed. Elevated heart rate, eyes popping out of my damn skull absorbed. When I finished the level (and got a Gold rank for the first time), I felt like yelling and punching the air. I don’t think I’m allowed many expletives here, so… yeah. Wow.

If it’s not clear by this point, I loved Sayonara Wild Hearts. Please play it. It’s on every modern platform now, so it’s extremely accessible. You might not get it if you don’t love synthpop, though, but I still think you will. Now I’m going to go play the Album Arcade mode, which lets you play the entire game without any separation between the levels.